With no mercy for those who've shown none to others, Muad’Dib exposes the New World Order, Nazi, War-Criminal Banksters, and their war-criminal puppet politicians – The “Masters of War” as Bob Dylan called them in his 1960s song. 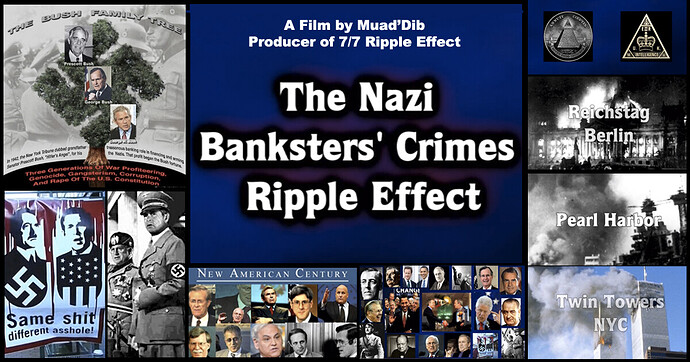 It’s a hard-hitting documentary about the innumerable crimes of the Ashke-Nazi Banksters.

Released: 5 November 2011 With no mercy for those who've shown none to others, Muad’Dib exposes the New World Order, Nazi, War-Criminal Banksters, and their war-criminal puppet politicians – The “Masters of War” as Bob Dylan called them in his 1960s...

From the banksters historical origins down to their planned genocidal future, Muad'Dib tracks who THEY (The Hierarchy Enslaving You) are, how THEY operate, and most importantly, how to get rid of them once and for all.

After being wrongfully arrested and falsely and maliciously imprisoned for making His “7/7 Ripple Effect” film and defending innocent people, he made this documentary to wake people up, to the fact that they are not only slaves to the banksters, but also considered to be just human resources – to be used up and thrown away.

The documentary delves into Biblical lessons and spiritual consequences for our actions. Using these lessons, Muad’Dib/JAH explains how the world got to this point and dire situation; and what must be done to rectify it. These days are like the Times of Noah; and you’ll hear revelations you didn’t expect to find in a NWO video.

The end of the film asked for millions to meet at Parliament one year to the date of its release – the 5th of November 2012; and demand a Jubilee. Only a handful of people showed up for this. People were there as part of the occupy movement as well as to “party”.

Muad’Dib’s call to action remains in the film as a record that an event similar to the one in V for Vendetta could have changed everything – if millions would have demanded it. Instead, no one came for that; and the world has plunged farther into enslavement.