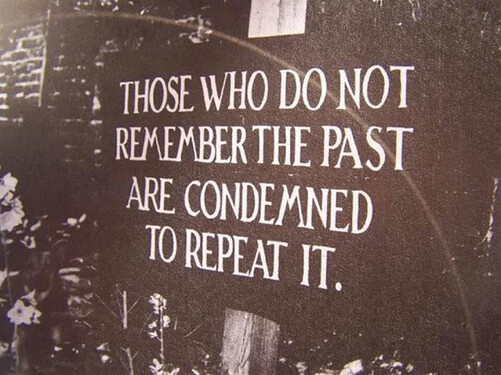 Given the measures that the Government of Gibraltar has taken during the manufactured Covid Crisis, it's perhaps prudent to look at what the authorities "deemed necessary" during the Yellow Fever outbreak on The Rock in the 1800s.

The second order of action was that the authorities swiftly and secretly established a place for isolation at the Neutral Ground. In the middle of the night, the sick in the town, were forcibly removed from their houses and sent to the encampment.

This comes from a recent article by anthropologists Lawrence Alexander Sawchuk and Lianne Tripp, whose studies often focus on Gibraltar:

Map of yellow fever encampment at the Neutral Ground. Adapted by Ken Jones from Chervin, 1830. Image from the article. 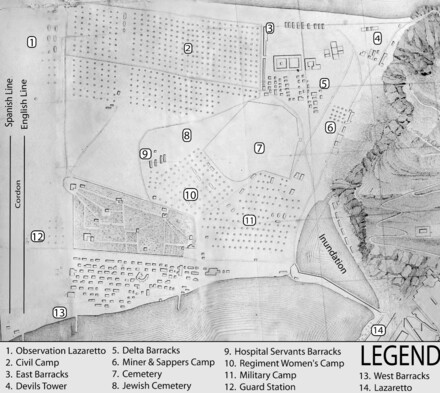 While the Nightingale Hospital at Europa Point might have been used for such a containment of the sick a few months ago, it was essentially a drill - an expensive training exercise to get the military, medical and all other authorities on the same page in a coordinated response.

And like today, where the GBC gets rewarded for furthering political goals, where it and the Gibraltar Chronicle constantly report on a casedemic, these kinds of reports happened in the past:

In September 1804, Gibraltar was struck by a deadly ‘pestilential fever’ and within the space of four short months, it was reported that ‘upwards of 2200’ had perished. Although the local newspaper reported 4864 deaths of inhabitants, this was most likely an inflated number to secure much needed financial support for rebuilding the fortress and its infrastructure. Yellow fever ravaged Gibraltar and Spain in greater numbers than all the countries in Europe combined. The yellow fever death rate was 128.83 per 1000 in the lower Iberian Peninsula, in other words by the end of the epidemic in December 1804, about one-eighth of the population had died of the virus.

Beliefs and accepted hypothesis about a virus are not always correct, but authorities want control of what and how we think about them.

While there was little doubt that the appearance of the disease was seasonal, only some viewed it as a disease of importation. By 1814, many in Gibraltar viewed yellow fever as an infectious disease that was spread from person to person (this was not a common view elsewhere), and that once recovered from the fever, the individual was no longer liable to second attack.

The truth is the Government of Gibraltar over-reacted to the Covid Pandemic. Gibraltar did not experience a death spike until after the jabs; face-masks are harming people, the local businesses are hanging on by a thread; and debt is through the roof. Yet, they still want everyone to believe their way is the right way, but it's more like the highway to hell. Proven again and again. Gibraltar is being set up to fall under a world government to survive. It's a good thing that The Lord has other plans for The Rock.

During the Yellow Fever incident in the 1800s, the first initiative they enacted was to set up a special marketplace for the sick -

In the fall of 1810, when a few yellow fever cases appeared, there was considerable fear and anxiety that there would be a repeat of the 1804 crisis. Consequently, health authorities implemented a series of novel and transformative measures. The first was an introduction of a special marketplace, the Pallenque, in response to the imposition of a sanitary cordon by Spain. Under the watchful eyes of the police on either side of the border, specific regulations were put in place for the continued flow of food and other necessities.

Fast-forward to today and look how the government is creating a divide between the vaccinated and unvaccinated. It is really going to be the "sick" that are rounded up or is it going to be the ones that don't comply, because they will be deemed as a threat to humanity. Evidence of encampments in the U.S. are happening. And by this article we can see encampments are possible even in a place as small as Gibraltar – if the government deems it necessary and get its foot-soldiers to comply with detaining its own.

News of Gibraltar police and military training in an urban-setting might cause us to raise an eyebrow – because drills are very important to get everyone on the same page.

Beware of drills that coincidentally go-live, like the 7/7 London Bombings.

But in this case, we have world drills like Event 201, Clade X, Dark Winter, SPARS, and Cyber Polygon. Locally, we have Nightingale hospitals and urban-police training even in the middle of the night.

While today, Gibraltarians are receiving a health certificate when they've been vaccinated, health passes were also given in the 1800s. 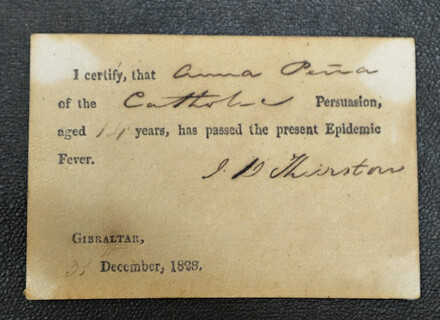 Before thinking that we're experiencing something completely new and unprecedented, study history.

Lawrence Alexander Sawchuk's book about Yellow Fever in Gibraltar – Passing through the fever: anatomy of an epidemic

Lawrence Alexander Sawchuk, is a Professor of Anthropology at the University of Toronto. He has numerous research articles about Gibraltar. Here are some examples:

In a place where land was scarce and military security paramount, population growth was perceived as Gibraltar's most insidious curse. While British law protected the rightful residence of those who were recognized by the early 19th century definition of Gibraltar “native,” colonial authorities realized that the local population was also increasing by other means. The tenet of the jus soli became one of Gibraltar's most notable weaknesses in attempting to control local population growth. Laws were enacted in a patchwork fashion, attempting to defeat any loopholes that might encourage large-scale immigration and the birth of alien offspring on the Rock. So far as alien/alien unions were concerned, the laws were straightforward, but problems ultimately arose for those local women and men who married aliens and who intended to remain in Gibraltar. Concerns over alien contributions to population growth seemed to reach crisis proportions in the 1860s and 1870s, but thereafter the burdens and difficulties imposed on that portion of the local population that opted to marry out eased substantially under the authority of a new governor.

Gibraltar proves the fallacy of of ‘the jab’ as the primates look on in wonder. “how stupid are these humans?”

Concurrently, we allow the compromised criminals running most of our governments (on behalf of their Globalist masters) to

That’s right. These once-proud Brits and Spaniards who people the small overseas territory of Gibraltar succumbed to Vaxx Madness—99% of them took the experimental ‘jab’—and now they have their just reward–more masks and lockdowns on their way back to feudalism 2.0, while “Cuz” sits free on Gibraltar, looking on in wonder. 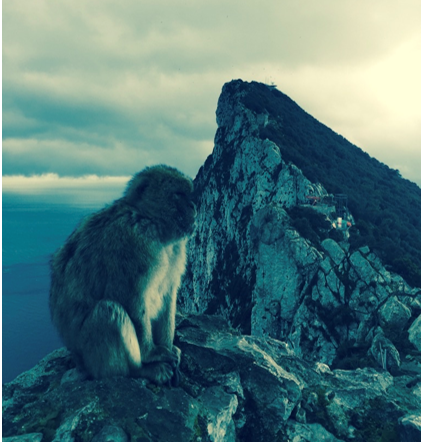 AND THE FULLY VACCINATED ROCK OF GIBRALTAR CRUMBLES

In 19th-Century Gibraltar, Survivors of a Deadly Virus Used ‘Fever Passes’ to Prove Their Immunity 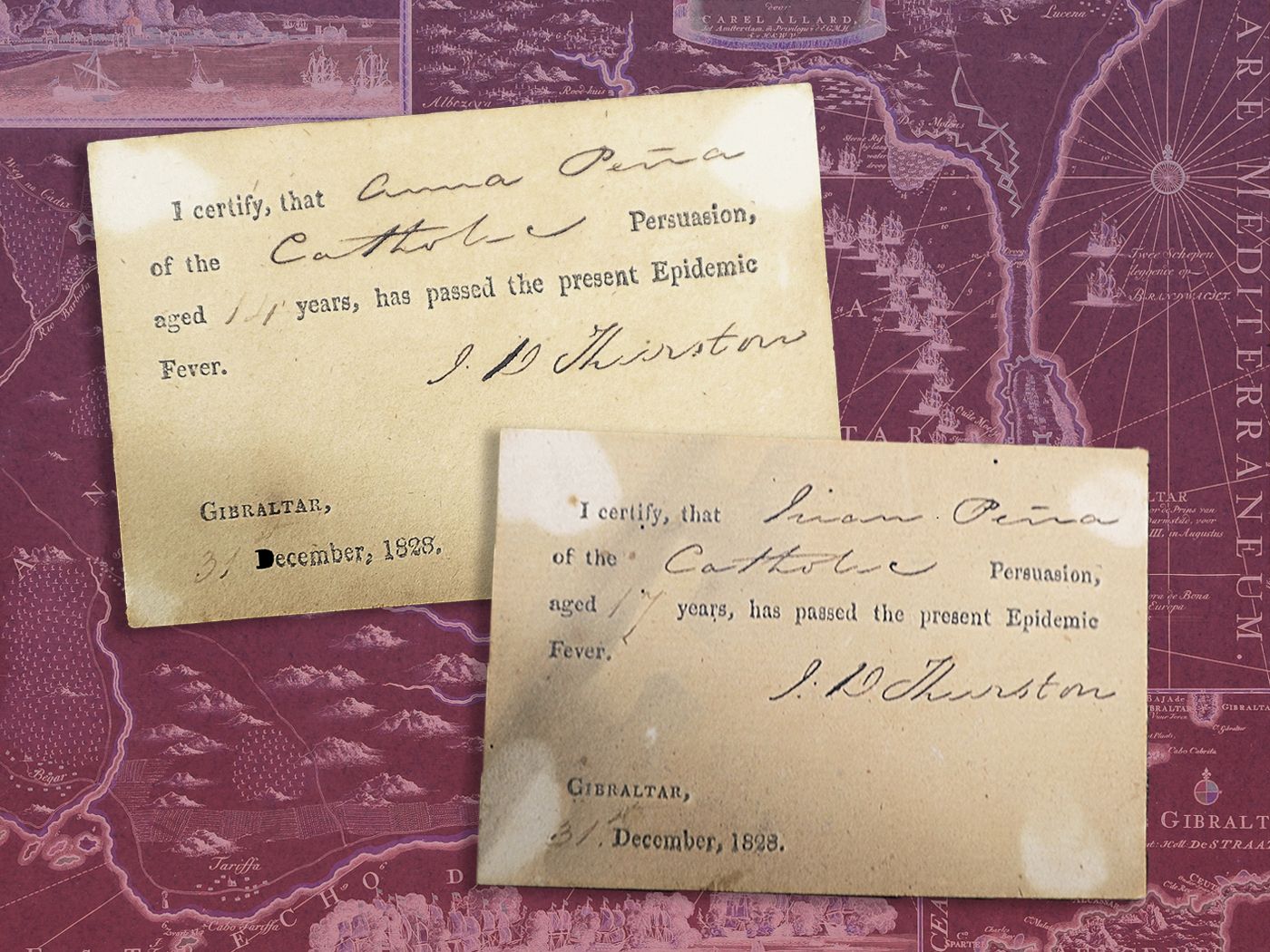 In 19th-Century Gibraltar, Survivors of a Deadly Virus Used 'Fever Passes' to...

Should historic health officials' response to yellow fever outbreaks on the Iberian Peninsula serve as a model for modern pandemic management strategies?

“Under that sort of system, the citizen had absolutely no rights,” says study co-author Lianne Tripp, an anthropologist at the University of Northern British Columbia who studies health and disease in the Mediterranean in the 19th and 20th centuries. “They had to do whatever was needed to be done to serve the fortress.”

The current model is heading toward taking away all rights.