Policing The Corona State by Tony Farrell in Gibraltar 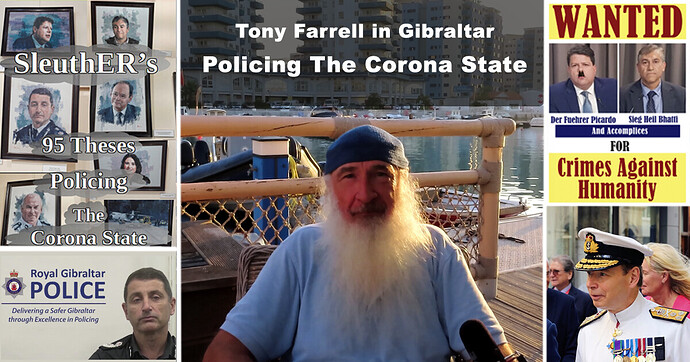 Tony Farrell is in Gibraltar calling for the arrests of Chief Minister Fabian Picardo and Former Public Health Director Sohail Bhatti and their accomplices for their CRIMES AGAINST HUMANITY.

In this 23-minute interview, Farrell – aka Martin SleuthER – discusses his report, “SleuthER’s 95 Theses: Policing The Corona State” that he submitted to the Governor of Gibraltar David Steel and the Royal Gibraltar Police Commissioner Richard Ullger on July 7, 2021.

Statement of Truth: Anthony of the Farrell Family V The Fraudulent Regina QE2

For many years I have been following Tony's numerous encouraging, highly inspiring and creative actions. For many years now, I have wanted to say thank you to him. Tony is a tremendously inspiring good example.

I'd also like to extend this thanks to the many others of The Master's workers for their articles, research, films, postings, websites and quiet background work.

Praise be to our Holy Father and our Lord Jesus Christ.

He that reapeth receiveth wages and gathereth fruit unto life everlasting, that both he that reapeth and he that soweth may rejoice together.

Do you not see that if you are careless about the reaping you have prevented the harvest-joy of the sower?

If by your life and character you do not reap to the full that which they have sown, you are robbing them of the well-earned fruit of their labours.

Further learn this lesson. There are many of My workers and servants in different spheres of activity to whom you owe the seed of word or example or loving help that has influenced you.

It is a sacred trust. Use it fully. Pass-on what you have learned.

Thank you so much 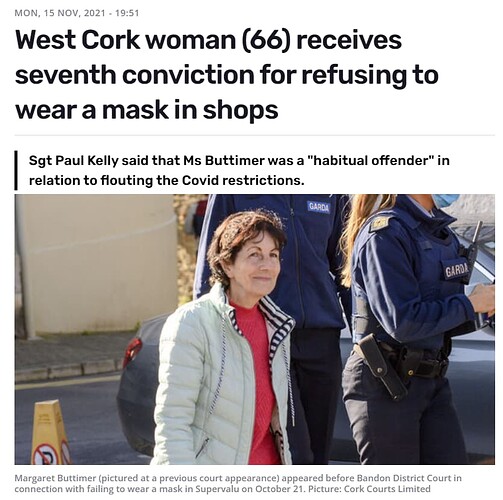 SHAME ON YOU, SGT PAUL KELLY

A 66-year-old grandmother who has spent a month in prison for her repeated refusal to wear masks in shops has received her seventh conviction for breaching the Covid 19 regulations.

Margaret Buttimer (66) of The Cottage, St Fintan's Road, Bandon, Co Cork today appeared before Bandon District Court in Co Cork in connection with failing to wear a mask in Supervalu Shopping Centre in the town on October 21 last.

Her solicitor Plunkett Taaffe said that whilst his client wasn’t admitting the offence she was also not contesting the evidence. He told Judge James McNulty that his client didn’t believe that she had committed an offence on the date in question by failing to wear a mask.

Dwayne Hunt, who is the manager of Supervalu in Bandon said that he was alerted to the fact that Ms Buttimer wasn’t wearing a mask at the tills on the morning of October 21st.

He went to the check out shortly after 10.30am on the day of the offence and asked Margaret Buttimer to put on a mask. She declined. They went outside the store and he again urged her to wear a mask for the safety of staff and patrons if she planned to go back in.

Whilst she wasn’t in any way verbally abusive, Buttimer informed Mr Hunt that she would be re-entering the shop without a mask.

SHAME ON YOU, PAUL GLEESON

Gardai were called to the scene and arrived within minutes. Garda Paul Gleeson again asked Buttimer to don a mask. She refused and was arrested.

No defence evidence was called. Mr Taaffe told Judge McNulty that the partner of Ms Buttimer was becoming increasingly concerned about her becoming “forgetful and doing unusual things.”

Report from a psychiatrist

A report from a consultant psychiatrist who specialises in the mental health of older people was handed in to the court for consideration. Dr Eleanor Mullan’s report indicated that there was a suggestion of a psychiatric disorder in the case but not sufficient current evidence to make a definite diagnosis.