This is madness! That little corner of the world is sacred, at least to some. Another iconic and historical piece of sacred land being sold to the highest bidder!! They think that Gibraltar is like the Tardis and can build Palaces in two square meters of land. 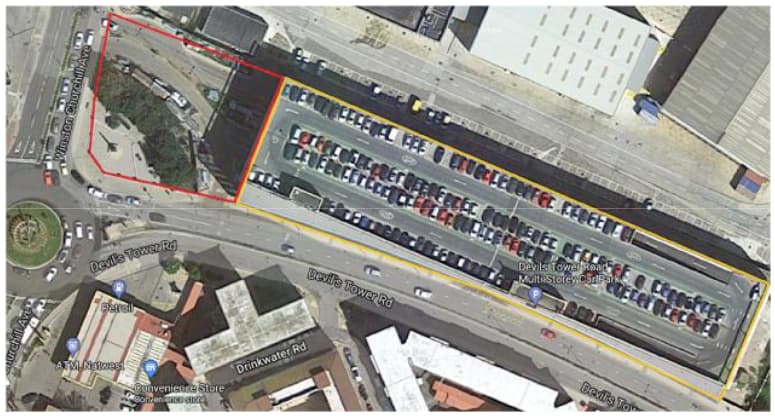 Wonder if the Hassan's Law Firm with help potential foreign investors like they did with the Eastside deal? – Gibraltar Government seals Eastside deal with TNG Global valued at £330m

Maybe the CCP would like to put in a tender through a shell company or its involvement quiet through nondisclosure MOUs.

If we look at it from a Biblical standpoint, maybe Father is removing the land from underneath Gibraltarian feet for disobeying Him and not keeping The Covenant.

It reminds me when the Northern Kingdom was carted off to Assyria, not believing Father would remove the ground beneath them. They were a little short-sighted on how that wouild play out.

Now, Gibraltarians seem to be at the mercy of a compromised government that seem hell-bent on selling to the highest bidder. And this is punishment for allowing their rule.

The Lord has said, “Every kingdom divided against itself is brought to desolation; and every city or house divided against itself shall not stand” (Matthew 12:25) , so it is with a small country like Gibraltar. They need God and His Laws, the ONLY Law, the ONLY lawful Laws on the planet. Petition to the Gibraltar Parliament Demanding the Return to God’s Law, Joe Bossano and joint-ventures with the Chinese Red Dragon They need God and they are ignoring Christ and His warnings already sent out. Who Does Gibraltar Belong to? The Reality Will Probably Surprise You(FISHING FOR AN ANGLICAN) Letter to First Minister and Mayors - Madrid wanting to share Gibraltar A great lesson to be learned in life is to live in harmony with others. Where there is disharmony, unhappiness and tragedy result. On the other hand, where there is harmony, happiness and progress follow. Not only is this true in nations or kingdoms, but it is also true in personal and family relationships. Harmonious relationships can be developed and enhanced by understanding and applying insights from the Scriptures. King of kings’ Bible

Taken from The Way home or face The Fire

Human society can NEVER work, because it is based on human selfishness (a kingdom or house divided can never stand - Parliament, families and society - Matt. 12:25).If you have 100 people and you are one of them, and everyone is out for their “Self”, you can have nothing but violence and war, with the strong victimising and oppressing the weak; the rich doing the same to the poor, and the clever doing likewise to the not so clever. If, however, you have the same 100 people and you are one of them, and EVERY single one of them puts everybody else first, and themself second, then, every single person, including you, gains 99 times. It will ONLY work, if EVERY single person does it, otherwise, the one who doesn’t, steals everything from the others (soundfamiliar?). So far it has NEVER been realised by man, and there has NEVER been peace on Earth.

Letter to the People of Gibraltar 3

Reading, 1 Samuel 15:1 - 15:28, explains by not following the voice of "I AM" through Samuel, how the kingdom of Israel was torn from Saul and "I AM" hath given to a neighbour... - punishment

15:1 Samuel also said unto Saul, The "I AM" sent me to anoint thee [to be] king over His people, over Israel: now therefore hearken thou unto the words of the "I AM".
15:2 Thus saith the "I AM" Lord of hosts, I remember [that] which Amalek did to Israel, how he laid [wait] for him in the way, when he came up from Egypt.
15:3 Now go and smite Amalek, and utterly destroy all that they have, and spare them not; but slay both man and woman, infant and suckling, ox and sheep, camel and ass.
15:4 And Saul gathered the people together, and numbered them in Telaim, two hundred thousand footmen, and ten thousand men of Judah.
15:5 And Saul came to a city of Amalek, and laid wait in the valley.
15:6 And Saul said unto the Kenites, Go, depart, get you down from among the Amalekites, lest I destroy you with them: for ye showed kindness to all the children of Israel, when they came up out of Egypt. So the Kenites departed from among the Amalekites.
15:7 And Saul smote the Amalekites from Havilah [until] thou comest to Shur, that [is] over against Egypt.
15:8 And he took Agag the king of the Amalekites alive, and utterly destroyed all the people with the edge of the sword.
15:9 But Saul and the people spared Agag, and the best of the sheep, and of the oxen, and of the fatlings, and the lambs, and all [that was] good, and would not utterly destroy them: but every thing [that was] vile and refuse, that they destroyed utterly.
15:10 Then came the Word of the "I AM" unto Samuel, saying,
15:11 I repent that I have set up Saul [to be] king: for he is turned back from following Me, and hath not performed My commandments. And it grieved Samuel; and he cried unto the "I AM" all night.
15:12 And when Samuel rose early to meet Saul in the morning, it was told Samuel, saying, Saul came to Carmel, and, behold, he set him up a place, and is gone about, and passed on, and gone down to Gilgal.
15:13 And Samuel came to Saul: and Saul said unto him, Blessed [be] thou of the "I AM": I have performed the commandment of the "I AM".
15:14 And Samuel said, What [meaneth] then this bleating of the sheep in mine ears, and the mooing of the oxen which I hear?
15:15 And Saul said, They have brought them from the Amalekites: for the people spared the best of the sheep and of the oxen, to sacrifice unto the "I AM" thy God; and the rest we have utterly destroyed.
15:16 Then Samuel said unto Saul, Stay, and I will tell thee what the "I AM" hath said to me this night. And he said unto him, Say on.
15:17 And Samuel said, When thou [wast] little in thine own sight, [wast] thou not [made] the head of the tribes of Israel, and the "I AM" anointed thee king over Israel?
15:18 And the "I AM" sent thee on a journey, and said, Go and utterly destroy the sinners the Amalekites, and fight against them until they be consumed.
15:19 Wherefore then didst thou not obey the voice of the "I AM", but didst fly upon the spoil, and didst evil in the sight of the "I AM"?
15:20 And Saul said unto Samuel, Yea, I have obeyed the voice of the "I AM", and have gone the way which the "I AM" sent me, and have brought Agag the king of Amalek, and have utterly destroyed the Amalekites.
15:21 But the people took of the spoil, sheep and oxen, the chief of the things which should have been utterly destroyed, to sacrifice unto the "I AM" thy God in Gilgal.
15:22 And Samuel said, Hath the "I AM" [as great] a delight in burnt offerings and sacrifices, as in obedience to the voice of the "I AM"? Behold, to obey [is] better than sacrifice, [and] to hearken than the fat of rams.
15:23 For rebellion [is as] the sin of witchcraft, and stubbornness [is as] iniquity and idolatry. Because thou hast rejected the word of the "I AM", He hath also rejected thee from [being] king.
15:24 And Saul said unto Samuel, I have sinned: for I have transgressed the commandment of the "I AM", and thy words: because I feared the people, and obeyed their voice.
15:25 Now therefore, I pray thee, pardon my sin, and turn again with me, that I may worship the "I AM".
15:26 And Samuel said unto Saul, I will not return with thee: for thou hast rejected the word of the "I AM", and the "I AM" hath rejected thee from being king over Israel.
15:27 And as Samuel turned about to go away, he laid hold upon the skirt of his mantle, and it tore.
15:28 And Samuel said unto him, The "I AM" hath torn the kingdom of Israel from thee this day, and hath given it to a neighbour of thine, [that is] better than thou.

Dear @TruthWINS ,
Thank-you.
Agreed.
Maybe Father is removing the land from underneath Gibraltarian feet for disobeying Him and not keeping The Covenant.
God has written His Statues and Judgements in His Holy Scriptures, His Word never fails, and is playing out across the entire Universe, whether any believes it or not, doesn't matter, it is apparent, that is to some, it is taking place as we speak. Joshua 21:45 There failed not ought of any good thing which the "I AM" had spoken unto the House of Israel; all came to pass.

May Father be with you always.

You are most certainly welcome.