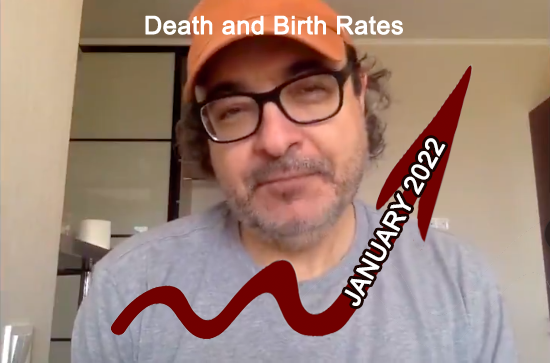 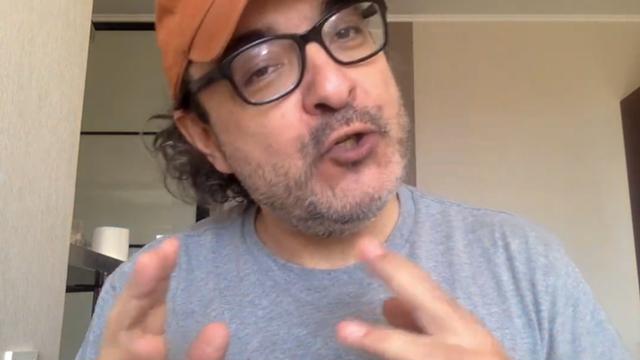 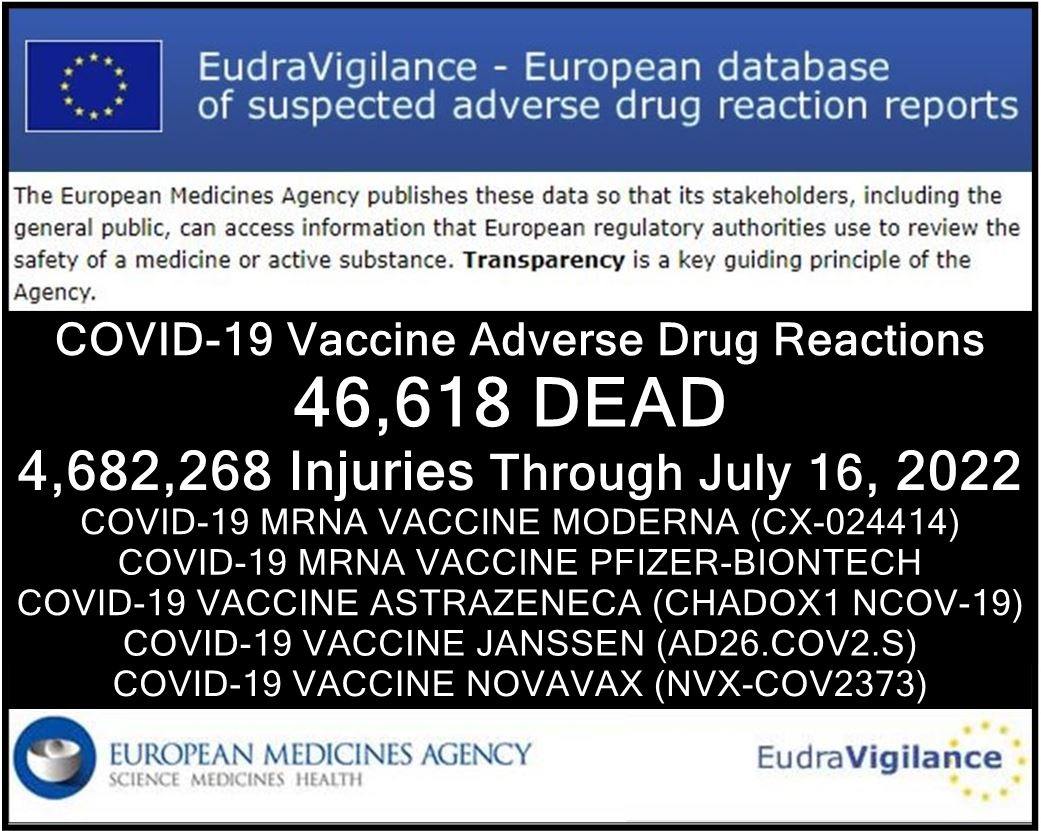 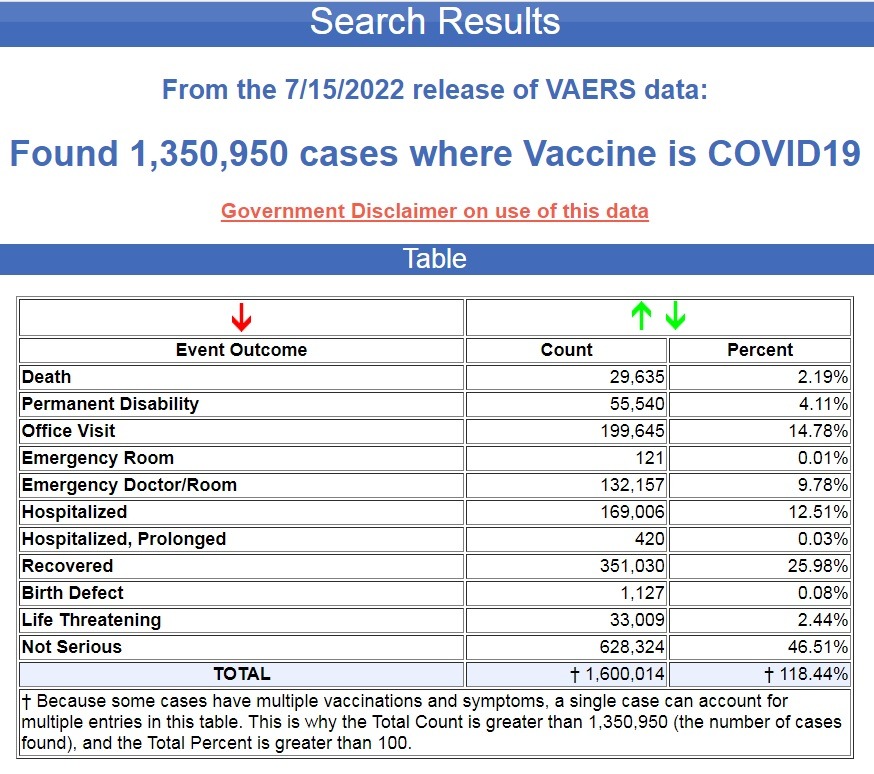 A 2011 report by Harvard Pilgrim Health Care, Inc. for the U.S. Department of Health and Human Services (HHS) stated that less than 1% of all adverse events following vaccines are ever reported to VAERS.

There have now been more deaths and vaccine side effects reported during the past 20 months to VAERS following COVID-19 vaccines than there has been for the entire previous 30 years for all FDA-approved vaccines before the Emergency Use Authorization of the COVID-19 shots in December of 2020. (833,968 cases, 9,279 deaths – source.)

The European (EEA and non-EEA countries) database of suspected drug reaction reports is EudraVigilance, verified by the European Medicines Agency (EMA), and they are now reporting 46,618 fatalities, and 4,682,268 injuries following injections of five experimental COVID-19 shots:

From the total of injuries recorded, almost half of them (2,126,925) are serious injuries.

“Seriousness provides information on the suspected undesirable effect; it can be classified as ‘serious’ if it corresponds to a medical occurrence that results in death, is life-threatening, requires inpatient hospitalisation, results in another medically important condition, or prolongation of existing hospitalisation, results in persistent or significant disability or incapacity, or is a congenital anomaly/birth defect.”

A Health Impact News subscriber in Europe ran the reports for each of the four COVID-19 shots we are including here. It is a lot of work to tabulate each reaction with injuries and fatalities, since there is no place on the EudraVigilance system we have found that tabulates all the results.

Since we have started publishing this, others from Europe have also calculated the numbers and confirmed the totals.*

This vaccine that the government is pushing on to the masses is unsafe and completely unnecessary and I will stand by that. There is no reason that the entire world needs to be taken a vaccine that was rushed through every process and shoved down our throats all while saying they still don’t know enough about this virus.

They don’t know enough about this virus, yet they developed a vaccine in mere months that is the only way to combat it. It sounds literally stupid. What gets me is that people believe this nonsense and propaganda which has me asking why.

Well, that is almost too simple of an answer to give. The mainstream news media outlets have been pumping everyone’s head with fear and death for months that everyone honestly believes that if they catch this virus it is an immediate death sentence.

Even years ago, when Ebola graced our shores there wasn’t that much hype around it and that does have a high death rate, but this virus is the one that will take us all out. So, everyone is racing to get the vaccine and that is even pregnant women and nursing mothers when in the past it was highly discouraged to get vaccinated while breastfeeding or pregnant.

However, due to the hype from the mainstream media, these women are getting jabbed with this experiment and are now seeing the heartbreaking results. These mothers are witnessing their sweet babies becoming incredibly ill and dying and yet STILL these demons in the medical community are pushing mothers to get this crap.

The Vaccine Adverse Event Reporting System (VAERS) published a report by a 36-year old mother whose baby boy was hospitalized two weeks after she got the first Pfizer shot. He was treated with IV antibiotics for two weeks, was sent home, and died shortly thereafter from blood clots in his arteries. Journalist Brian Shilhavy searched the VAERS database and found another breastfed infant who died the day after his mother took a second dose of the Covid vaccine. Then he found 94 more cases of breastfeeding babies that sustained injuries after their mothers took Covid injections. Symptoms in those infants included anaphylaxis shock, blood clots, high fever, vomiting, diarrhea, and hives. Many nursing mothers had their breast milk dry up after taking a Covid shot. -GEG

As more and more data is entered into the government Vaccine Adverse Event Reporting System (VAERS), we are now seeing cases where babies that are breastfed are suffering adverse reactions to the COVID shots that their mothers are taking. The shots have not yet been authorized for infants, although such authorization is expected any day now.

Celeste McGovern of LifeSite News reported on one case where the breastfeeding baby died with blood clots, something rarely ever seen in infants, but a common side effect we are seeing with people who take the COVID shots, blood clots which the CDC states are “rare” in spite of the data in VAERS that shows over 10,000 cases of “thrombosis”, including 488 deaths.

VAERS report ID 1532154 was apparently filed by the mother, a 36-year-old woman from New Mexico:

I had been breastfeeding my 6 week old baby at the time that I received the first Pfizer vaccine on June 4, 2021.

He became very sick with a high fever about 2 weeks after I got the first Pfizer vaccine on June 21. He was treated for 2 weeks with IV antibiotics for a supposed bacterial infection.

However, they never found any specific bacteria, and called his diagnosis culture-negative sepsis. At the end of his hospital stay he tested positive for rhinovirus.

After the 14 day course of antibiotics, he was home for one week, but exhibited strange symptoms (e.g. swollen eyelid, strange rashes, vomiting).

I took him back to the hospital on July 15, where he presented with what they called an atypical Kawasaki disease.

He passed away shortly thereafter from clots in his severely inflamed arteries.

I am curious if the spike protein could have gone through the breast milk and caused an inflammatory response in my child.

They say Kawasaki disease presents very similarly to the Multi-System Inflammatory Syndrome in children that they are seeing in post Covid infections. (My baby also had unusual birth circumstances, as he was born at 37 weeks, triggered by a maternal appendicitis.)

I ran a search in the VAERS database to see how many other reports have been filed with mothers who are breastfeeding babies and came up with 94 cases, which included one other infant death. (Source.)

Patient received second dose of Pfizer vaccine on March 17, 2020 while at work. March 18, 2020 her 5 month old breastfed infant developed a rash and within 24 hours was inconsolable, refusing to eat, and developed a fever.

Patient brought baby to local ER where assessments were performed, blood analysis revealed elevated liver enzymes. Infant was hospitalized but continued to decline and passed away.

Diagnosis of TTP. No known allergies. No new exposures aside from the mother”s vaccination the previous day. (Source.)

I am only including some of the cases here that affected the baby who was breastfeeding, and who did NOT get the shots but apparently had side effects from drinking the breast milk from their mothers who got the shots.

VAERS case 1070803 (Pfizer): I was exclusively breastfeeding at the time of receiving both doses. My 4 month old son developed diarrhea on February 1st and it lasted 2 weeks. Lab work/stool studies were negative for any bacterial or viral infections.

VAERS case 1119088 (Pfizer): Patient received 1st in series covid vaccine at approximately 915… she breastfed her 12 month-old infant shortly thereafter without problem. around 1215 baby was getting fussy and breastfed for about 5 minutes before baby broke out in hives.

VAERS case 1124474 (Pfizer): MOTHER OF 12 MONTH OLD BOY RECEIVED FIRST DOSE OF COVID 19 VACCINE AT 9:15 AM SHE BREASTFED HER 12 MONTH OLD SON 3 HOURS LATER AND WHILE BREASTFEEDING THE CHILD DEVELOPED ACUTE ANAPHYLAXIS. TO BE CLEAR: MOTHER HAD THE VACCINE AND THE CHILD HAD THE REACTION

VAERS case 1139952 (Moderna): Breastfeeding exclusively an 11 week old infant boy. I have no adverse effects other than sore arm but within 24 hrs baby appetite decreased and vomited once so far.

VAERS case 1144429 (Pfizer): I am breastfeeding and the day after receiving the Pfizer-BioNTech COVID19 vaccine and breastfeeding that day, my one month old had diarrhea for approximately 36 hours. There were no other changes to diet. Approximately 14 hours prior to the diarrhea I had one dose of tylenol to help with the aches from the vaccine reaction.

VAERS case 1149144 (Moderna): The patient who received the vaccine was a breastfeeding mother. Her 15-month-old developed an ear infection, requiring antibiotics for the first time ever, within 72 hours of the vaccine administration.

Oh, and that is not all of them!

You can read more about this tragedy HERE.

Please share this with everyone you know so that we can hopefully prevent another mother from going through a horrific tragedy such as this again.

Vaccines are the problem, not the solution. Vaccination has made murder legal Australia has seen a dramatic 63 percent decrease in births following the rollout of the toxic COVID jabs.