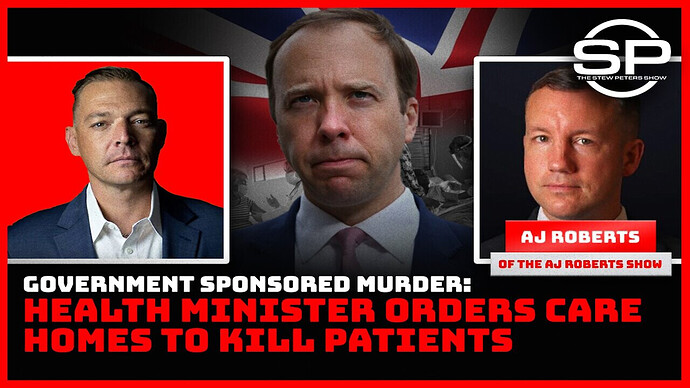 British Army Veteran, AJ Roberts tells Stew Peters that police accepted the charges against the school and vaccinator from a group representing the parents of a child victim.

AJ Roberts: "Children are being coerced in schools. We've had deaths in the last few weeks. Luckily for us, some people on behalf of one of the parents of one of the victims have actually went to the police to press charges of murder against the vaccinators; and they accepted the charges; and they actually had a crime number given to them, which is a huge step. That's actually in progress now. Other children have died since then. Many have collapsed in classrooms suddenly. I've seen stories in local mainstream media of kids dying suddenly. It's absolutely tragic."

Stew: Who is the accused in the murder case?

AJ: I believe it is the school and the vaccinator.

Here when a person or a child dies, some
automatically will defend the cause that deceased had other diseases that's why they passed on from the vaccine but the vaccine doesn't kill only has side effects, while those who know and speak out are silenced and others chose not to speak at all while others know and strive to protect themselves.

@Nam Most individuals who give excuses are blind to The real truth sadly while the death tolls soar. The excuses given are to cover up the truth, deceive the masses to believe lies and more lies, while others are dedicated to standing for Truth no matter the cost as everyone should be. Let the truth be heard regardless the threats, Truth WINS!

@Nam You are certainly welcome.