Whistleblower Funeral Directors Speak Out! The Only Ones Dying Are From the Vaccine 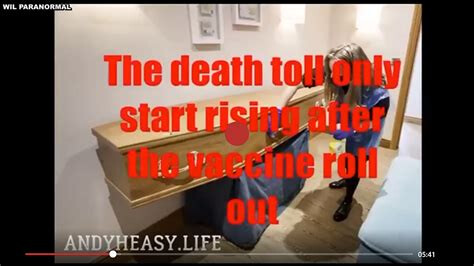 Funeral Homes are saying the only ones dying are those taking the vaccine. This is not the first funeral director I have heard say this. It is more like the tenth. They did not see a rise in deaths or funerals until January through March of this year when the shot was rolled out.

This is in many countries and seems to be the same everywhere. Funeral Directors around the world are now speaking out and are confirming what everyone has known except those still asleep. Directors are reporting that hospitals are virtually empty and that no one is dying of covid.

It’s all a lie to deceive the public into promoting them to get the vaccine which is not in reality, a vaccine.

They are saying that come the Winter season, the vaccinated will begin dying in droves all around the world. We have not seen anything yet.

WHISTLEBLOWER - FUNERAL DIRECTORS SPEAK OUT - THE ONLY ONES DYING ARE FROM...

Funeral Homes are saying the only ones dying are those taking the vaccine. Funeral Directors around the world are now speaking out and are confirming what everyone has known except those still asleep. Directors are reporting that hospitals are... 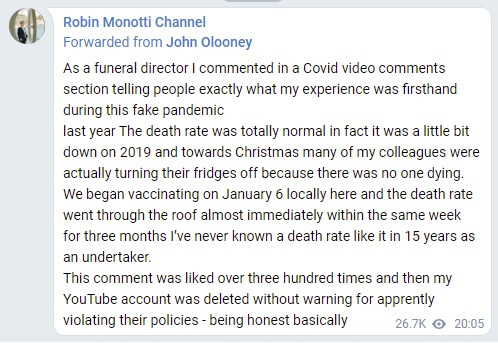 British funeral director John O’Looney has revealed to architect and film producer Robin Monotti how he experienced this “fake pandemic. “Mortality was at normal levels and was even slightly lower than 2019,” he wrote in a message on Telegram.

O’Looney said many of his colleagues turned off their refrigerators around Christmas because “nobody died. “We started vaccinating here on January 6, and then almost immediately the number of deaths went through the roof. I have never experienced such a high mortality rate in 15 years as a funeral director.”

At the beginning of the “corona pandemic,” O’Looney, who lives in Milton Keynes, made headlines when he warned that bodies might remain in hospitals because next of kin could not afford a funeral or cremation due to the lockdown.

He told the BBC that all the focus was on increasing cooling capacity in mortuaries while no consideration was given to people who could not arrange a funeral due to financial difficulties.

Can you see how Public Health Scotland have been able to manipulate the data on deaths in terms of vaccination status in favour of showing the vaccines are working by using these dates? The majority of Covid-19 deaths occurred prior to just 9% of Scotland’s population receiving the vaccine.

Well that deception ends right now, because we have been able to find the numbers of recent alleged Covid-19 deaths by vaccination status, by comparing the numbers in the latest report against the numbers presented in previous reports, and we can certainly see why Public Health Scotland have chosen to present deaths the way they have, they wouldn’t have a leg to stand on otherwise.

The reason this is interesting is because as of the 6th July 30% of Scotland had still not had a Covid-19 vaccine, therefore you would have thought that if the vaccines work, this rise would be due to unvaccinated people dying? But it isn’t, and Public Health Scotland are trying to hide it.

Because if we go back to their previous Covid-19 Statistical Report published on the 21st July we can use the numbers to work out the vaccination status of the people allegedly dying due to Covid-19.

Using that measure against the above data we can clearly see the fully vaccinated have got a problem, because it looks like if they are infected with Covid-19 they are much more likely to be hospitalised than if they were not vaccinated.

But we’re afraid the data shows that being hospitalised is the least of their worries, even if Public Health Scotland have tried their hardest to conceal it.
![|639x96](https://i2.wp.com/dailyexpose.co.uk/wp-content/uploads/2021/07/

EXCLUSIVE - Covid-19 deaths are rising and official data shows 87% of the...

Alleged Covid-19 deaths are on the rise again in the United Kingdom, with both England and Scotland seeing significant rises since the end of June, and we can e

5,522 people have died within 28 days of having a Covid-19 Vaccine in Scotland according to Public Health Scotland

Public Health Scotland have revealed that 5,522 people have died within twenty-eight days of having a Covid-19 vaccine within the past 6 months in Scotland alone. 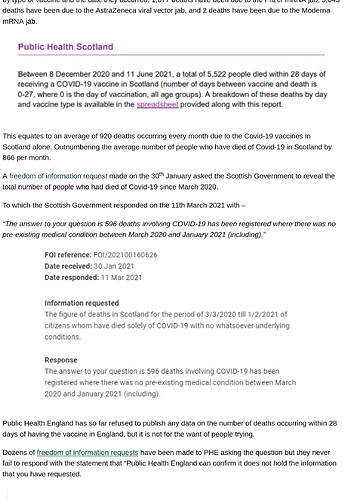 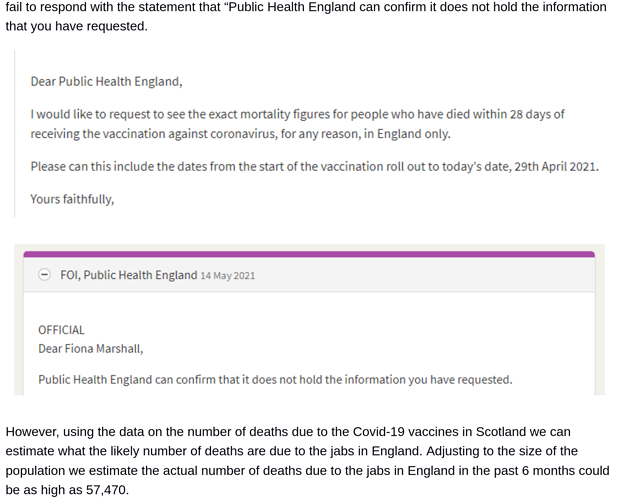 Public Health Scotland have revealed that 5,522 people have died within twenty-eight days of having a Covid-19 vaccine within the past 6 months in Scotland alon 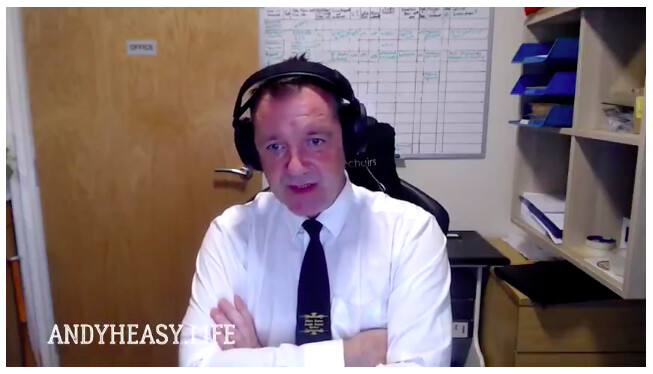 John, the UK Funeral Director Undertaker, whose video disclosing that the ones dying are the vaccinated went viral and now he's helping expose the lies and genocide.

FUNERAL DIRECTOR, I’M LOOKING AFTER THE TERRIBLE MISTAKE, MOST DEATHS ARE VACCINATED

It's going to get a lot worse. I think they are going to mandate and then start rounding people up. And they've built big internment camps here to do that. There's a place here called HM Prison Wellingborough and it's the site of a high-security building and they've built a new holding center there that will take about 30,000. There's a huge temporary mortuary on site and its next door to the crematorium,. It's every bit the final solution.

It will end up in either two ways; either total world domination or end up in Nuremberg, but there will be rivers of blood before it does.

I struggle to understand how people can do such terrible things to other people and I've questioned myself on how these people, because these people are not unintelligent, they know what's going on.

So, I would kind of question what motivates a person to commit genocide, knowingly?

It can only be two things:

It's a very elaborate plan... I grow increasingly angry. It's going to end one of two ways. You've got people willing to starve you to death; it's every bit the template of Nazi Germany.

There is An Ark, but those people committing genocide won't be on it – Christ's Space-ship - Ark "The New Jerusalem" The Arks of Noah and Jesus. Life or death?

So, they are really vying for a seat to join Satan in The Pit.

Kier agrees £253m deal for new Wellingborough prison – Work on the 1,680-place category C resettlement prison is scheduled to begin next month and to be completed by autumn 2021.
It will be built on the same site as the former HMP Wellingborough, which closed in 2012. The new prison is part of the government’s Prison Estate Transformation Programme... Prisons minister Rory Stewart said: “I am committed to the building of up to 10,000 modern and decent prison places to replace old, expensive and unsuitable accommodation, and the start of work at Wellingborough is an important step forward...

HMP Wellingborough 'mega prison' construction begins – Construction has started on a new £235m "mega prison", on the site of a jail closed five years ago. HMP Wellingborough, Northamptonshire, closed in December 2012 because of its poor condition. The new facility will be a category C jail to house up to 1,680 prisoners.

Wellingborough Prison: G4S awarded £300m contract to run 'mega jail' – In 2018, G4S was stripped of its contract to run Birmingham Prison. The jail was taken under state control following a damning report detailed scenes likened to a war zone in which inmates walked around "like zombies". However, four other prisons run by the company - Altcourse, Parc, Rye Hill and Oakwood - have won praise from inspectors.

Another UK Funeral Director tells it like it is:

"Complete Hoax And A Farce": Whistleblower Funeral Director Exposes The...

Join our leading researchers on https://GroupDiscover.com to find the best videos from across the censorship-resistant internet platforms like Odysee, Rumble, LBRY, Bitchute & Brighteon. Add me on these great platforms:... 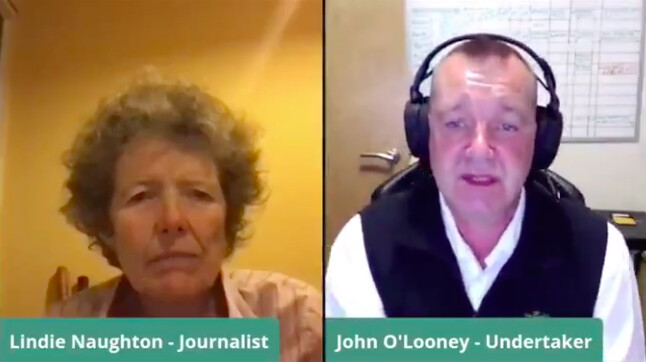 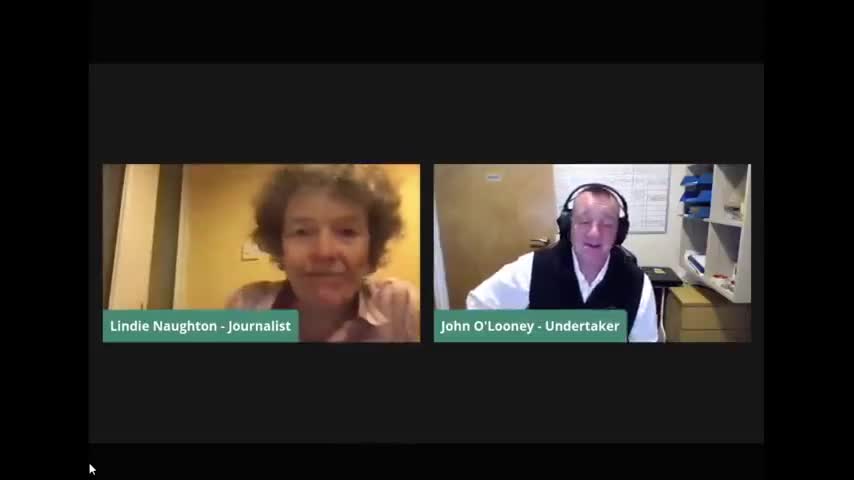 In this compelling video a British funeral undertaker speaks to an independent journalist giving first-hand testimony revealing what has really been happening with the dead from care homes and hospitals.

Undertaker, John O’Looney talks of the lies and shenanigans spun by corrupt politicians and media to brainwash the public into believing there exists a ‘deadly virus’. Lindie Naughton interviews this candid funeral director to learn that due to medication given during the pandemic “Deaths jumped 250 percent when injections began.”*

“As part of my work I visit hospitals routinely. During the pandemic I got to speak to many medical staff. We all understood we were being lied to and this was fraud,” says O’Looney.

The undertaker explains it is routine that when collecting the dead for burial/cremation they keep a mortuary register (a kind of ‘guest book’) this shows a record of any usual events. The undertakers explains that he saw, during the pandemic, unusual patterns of high deaths at care homes where the vast majority deaths were known by staff not to be from COVID19 but more likely due to the medication given to the elderly.

“Terminal cancer patients are routinely being recorded as COVID deaths.”

To many independent analysts there appears to be a correlation between the supposed new variants and vaccine breakthrough cases. New variants are suspected to be nothing of the sort and are actually adverse reactions to the experimental jabs.

Any and all deaths are glibly and dishonestly (and likely criminally, too!) being certified as from “COVID” and such “variants” and this is masking what some observers believe is mass genocide.

More from funeral director John O'looney
Some points made:
The Hippocratic Oath was changed and omitted thou shall do no harm
The NIH knows the Delta variant is a vaccine injury
Funeral Directors are directly involved in the cover up and murder of victims MUST WATCH!!! Funeral Director John O’Looney Blows the Whistle on Covid | The...

Dear @be1 ,
Thank-you for this good video, definitely a MUST WATCH!!! Here are a few more Key Points.

These are my rough notes, taken as I watched this searing video.

> The number of “COVID deaths” was systematically inflated throughout 2020, by calling deaths by cancer, heart attack, car accident, etc. all “deaths by COVID.” There was no unusual spike in deaths.

> Death rate SOARED with the rollout of the “vaccination” drive, now including all ages. “I’ve never seen anything like it…. It was just awful.”

Lasted through April; then months of the “quietest” period he’d ever seen—followed by another surge of deaths “of all kinds,” among all ages. ALL “fully vaccinated.”

> “Delta variant” is widely regarded in the NHS as a “vaccine” . injury, deliberately misreported as COVID.

> They’re jabbing children, inventing new “variants” to keep everyone afraid; and children will be dying from the shots, but they’ll all be misreported as due to those new “variants.”

> Funeral directors with integrity are frightened. knowing that they will be silenced if they dare speak out

> This is a depopulation drive, carried out by killing people outright, and by sterilizing children.

> Despite the shattering of the economy, the state has built massive new prison complexes, large enough to hold 30,000 people. They include crematoria and mortuaries.

Also John wants everyone to be able to verify he is a funeral director seeing all this he is reporting first hand. He gave his email to all who want to contact him John@mkffs.com.uk