by Justas Stankevičius: After the decolonisation processes of the second half of the 20th century, one might get the wrong impression that imperialism has become obsolete, and that the word itself is only appropriate for the

An update on China's BRI involvement in nearly 70 countries and international organisations in Asia, Europe and Africa.

In Europe, local ports and other strategic assets are being nationalised by buying up their stakes.China has partial or full ownershipof 13 different European ports.

The EU set up an investment mechanism in 2017, which was thought would help protect Europe’s security and strategic interests.

China's geopolitical power is being used to divide the EU. Phillipe Le Corre, co-author of China’s offensive in Europe, states that “Over the last few years, China has demonstrated its ability to divide Europeans by creating entities such as the 16+1 format, a group designed to facilitate government and business links between China and Eastern and Central Europe”.

The number 16 represents the 16 countries of Eastern and Central Europe; while the singular unit is, of course, China. The aim of this group is to promote business relations between the 16 countries and China, and this, according to Europe Now, “could become a Trojan horse for China to destroy the bloc’s unity in sensitive areas ranging from the single market to the screening of foreign investment.” The worry is entirely justified. While China already controls 13 EU ports in the West, it is developing separate plans for Central and Eastern Europe.

While China already controls 13 EU ports in the West, it is developing separate plans for Central and Eastern Europe. China can easily use these plans for Eastern Europe as a tool to undermine EU unity, or to force Member States to veto certain unpopular EU decisions. Moreover, the investment mechanism set up in 2017 does not really work, as each Member State can decide for itself whether or not to apply these “safeguards”. This is also acknowledged by the prestigious UK business and economic newspaper Financial Times stating that “Chinese lobbying has already proved effective in promulgating the proposed review process”.

Read the entire article at this link.

Gibraltar was warned years ago about the China's BRI Initiative – The China Trojan Dragon. 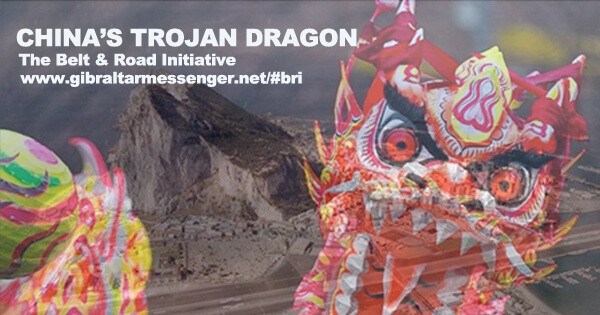 Joe Bossano and joint-ventures with the Chinese Red Dragon

UK-China Relations: From Gold to Dust. But what about Gibraltar?

If you want to know how all this turns out Biblically, think about this – God brings in the enemy to destroy adulterous nations. The EU will be divided and most of it, including most of Africa, will side with China. The UK and the USA, as well as other Northern Kingdom Israelite Nations will join forces with Canada, Australia etc in the coming hot war.

This domination and divide is slowly but surely happening.