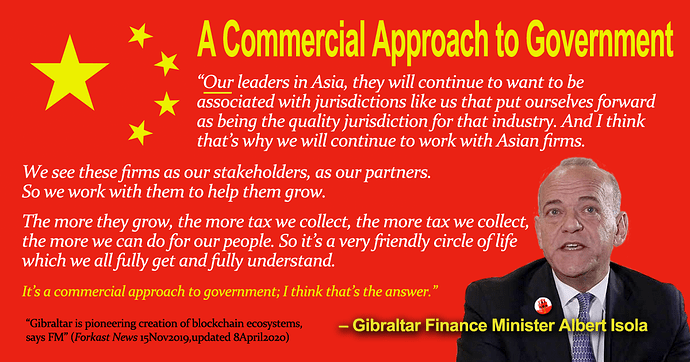 The Bible instructs us to judge a tree by its fruit. Well, Isola’s fruit is looking a bit overripe. Is he rotten to the core? Why are politicians in a Christian Democracy so in love with atheist communist China?

He appears quite at home in Hong Kong and hob-knobs with Chinese leaders. It’s treason to betray your own country for financial gain, no matter how much “Evil” gets twisted into being called good for those back home. (Isaiah 5:20)

Ask yourself, “who’s making the big money?” If one does a search on all the companies (active, dissolved, shell) and the people associated with them, you’d see a pattern that whoever plays “Company House” together, stays together. https://beta.companieshouse.gov.uk/

Gibraltar’s Finance Minister is on board with bringing in a digital world, as well as many others in Gibraltar who hope to make a “killing”. But is that what the whole of Gibraltar wants, because there is a resistance movement against a cashless society, mass surveillance, digital identities, and a stupid SMART-TRACK city.

DOT 1: The Fruit of Albert Isola
WHERE are the leaders of Gibraltar located? Why does Albert say “OUR leaders in Asia”. Why does he think “A commercial approach to government is the answer?” Isn’t that Fascist, where corporations run the government? Please read between the lines: https://forkast.news/listen-gibraltar-minister-albert-isola-on-how-the-rock-leads-in-blockchain-regulation/

The Hainan Free Trade Pilot Zone represents a key gateway for China to implement innovation-driven development strategies, increase engagement in cutting-edge areas such as the digital economy, and build a world class “Free Digital Port”. Albert Isola attests to the strong spirit of COLLABORATION that is central to sustaining blockchain development globally, as well as China’s increased engagement with the international DLT community. https://www.beltandroad.news/2019/12/08/gibraltar-minister-opens-china-blockchain-silk-road-forum/

Gibraltar signed a MOU with Huobi Group to have more cooperation on encryption techniques. In 2018, China’s Huobi Group became leading blockchain company in Gibraltar, according to Albert Isola. 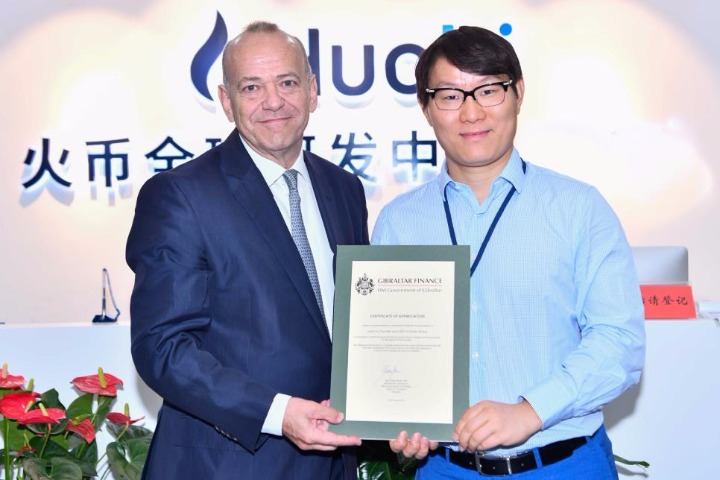 Gibraltar just signed a MOU with Huobi Group, one of the largest digital assets trading platforms in the world, to have more cooperation on encryption techniques, including business, education and academic research exchanges.

A MOU signed by Albert Isola and Jianing Yu, president of Huobi Univ, to explore the development of blockchain education/research.

Wonder if China helped fund, build or otherwise facilitate in the creation of the University of Gibraltar. Was it funded from the £300 million loan, which they are hiding where it came from? 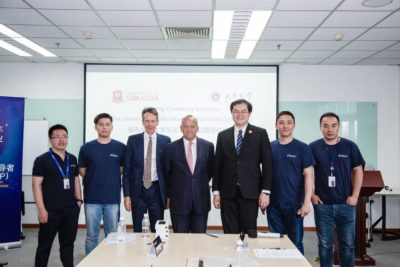 Huobi University and University of Gibraltar to Collaborate on Blockchain...

Huobi University and the University of Gibraltar have announced plans to collaborate on blockchain education and research.

Wonder if the University of Gibraltar will be pressured by China and its agents.

Academic funding agreements, Confucius Institutes and Chinese students overseas are all used by China to monitor and suppress ideas it doesn't approve of.

Both Wuhan and Gibraltar plan to test entire population for coronavirus. What do you know: the new Gib testing lab has been set up at University of Gibraltar. Surprise, surprise. It’s been reported that the tests are already tainted with the virus and actually give it to people.

Gibraltar's Commerce Minister Albert Isola visits Hong Kong and the Chinese mainland to tout the synergies fostered in collaboration between the Guangdong-Hong Kong-Macao Greater Bay Area and the British territory.

DOT 8: Gibraltar as a Chinese Gateway/Territory

Albert Isola, minister for commerce in the government of Gibraltar, pointed out that the United Kingdom overseas territory is an ideal fit for Chinese companies. Gibraltar could be a gateway for China to enter UK.

Gibraltar’s Interest in China’s Belt and Road Initiative Might NOT BE in the Best Interest of Gibraltar Gibraltar-Messenger.net 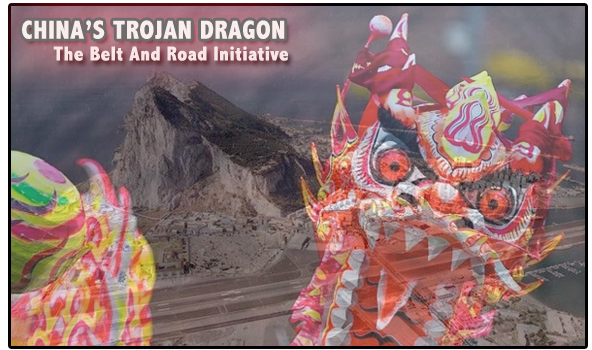 This is what happens when you trust the Chinese Communist Party.

Should Albert Isola and Joe Bossano reconsider their attitude toward the CCP, the BRI, and Chinese investment in Gibraltar? 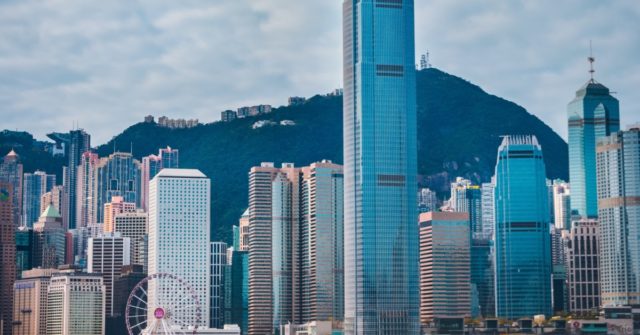 Gibraltar’s Interest in China’s Belt and Road Initiative Might NOT BE in the Best Interest of Gibraltar Gibraltar-Messenger.net