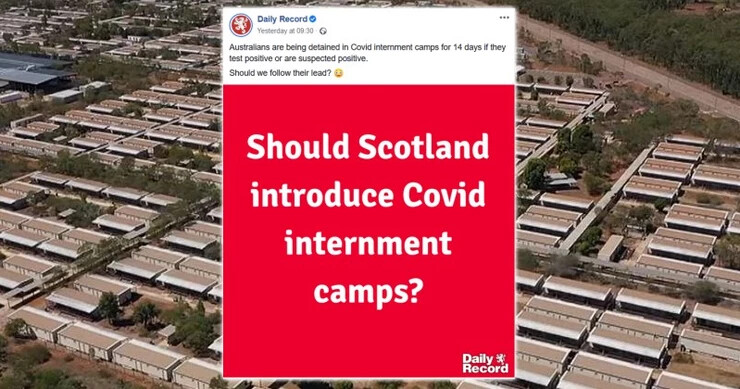 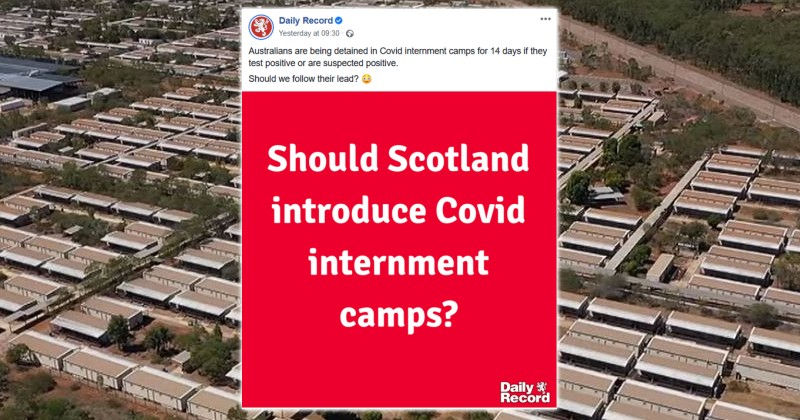 Scottish newspaper asks readers if ‘COVID Internment Camps’ Should be Introduced, and many like the idea.

Scotland’s largest newspaper is asking its readers if the country should follow Australia’s example by introducing “COVID internment camps.”

Mega-Prisons are already being built in the UK.

Speculation about UK having Covid Internment camps has been circulating for months online. What is not in question is that the Government are building super-prisons, up and down the country, despite crime going down steadily for two decades.

Six new mega-prisons have been announced.

With facilities for 13,000 people, including Crematoriums. The Ministry of Justice plan two 'mega prisons' around an RAF airbase in Essex. Another is currently being built in the North West of England. Two more are planned in the South-East of England with two prisons nearing completion in Wellingborough and Leicestershire.

The Ministry of Justice claim the mega structures are 'to keep the people safe'.

by Darren Birks - read the rest of the article at link.

Funeral Director John O’Looney: It's going to get a lot worse. I think they are going to mandate and then start rounding people up. And they've built big internment camps here to do that. There's a place here called HM Prison Wellingborough and it's the site of a high-security building and they've built a new holding center there that will take about 30,000. There's a huge temporary mortuary on site and its next door to the crematorium,. It's every bit the final solution.

It will end up in either two ways; either total world domination or end up in Nuremberg, but there will be rivers of blood before it does. – Whistleblower UK Funeral Director – The Only Ones Dying Are From the Vaccine - #4 by DOTS