MUST WATCH!!! Funeral Director John O'Looney Blows the Whistle on Covid | The...

"The 'Delta Strain" is the vaccine." 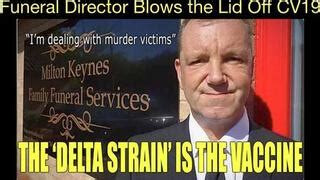 Adding weight to that claim is this article:

The media can read just as well as me (maybe), but somehow it is left to me to report this.

The UK government just reported the following data, tucked away in their report on variants of concern:

Less than a third of delta variant deaths are in the unvaccinated.

Let me say that another way - two-thirds of Delta deaths in the UK are in the jabbed.

From the 1st of February to the 2nd of August, the UK recorded 742 Delta deaths (yes, the dreaded Delta has not taken that much life).

The report is here.

In the video, the funeral director mentions the use of Midazolam in Care Homes/Nursing Homes. Midazolam (Versed) is such a potent opioid that it is used in carefully monitored situations such as in an Intensive Care Unit or Operating Room / Recovery Room. Has its use been extended without the need for close monitoring? Its use in a Nursing/Care Home facility warrants investigation. Were these patients euthanized? Did their family know they were given that drug? Were they murdered?

HOW HOSPITALS ARE KILLING US - MANY BOOMS! Depopulation

Video is in 4 parts Part 1: My takedown of “Trusted Voice” of the Pandemic, Michael Warner. Part 2: What is an Intensivist and how have they ruined Hospitals? Part 3: The history of Critical Care – some shady characters emerge in the wake of WW2. Part 4: Who benefits from this? Who forced the hiring of Intensivists in thousands of hospitals? Is this part of a darker agenda of population control and eugenics? 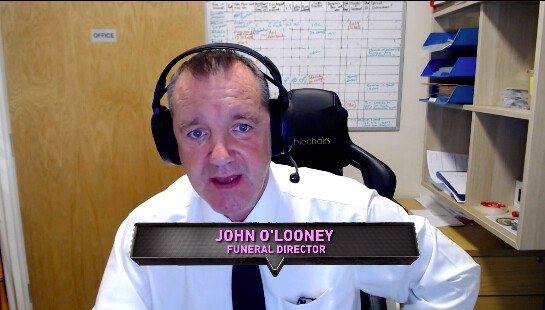 Funeral Director John O'Looney has spoken out in previous months about the real story behind the COVID death numbers. John returns to give a stark warning for people to wake up before children begin to die from the vaccine roll out in the UK.

He was offered $85,000 to not speak out.There is talk of how people in the medical community are required to give lethal doses. There is concern about people dying and children dying if they are given the jabs. This man is passionate to share the truth before they kill him or disappear him. In the last 18 months, he has had no children who died from Covid in the funeral home.

However, he predicts, that when children are forced the jab, they will die and the authorities will label it a “new variant”. 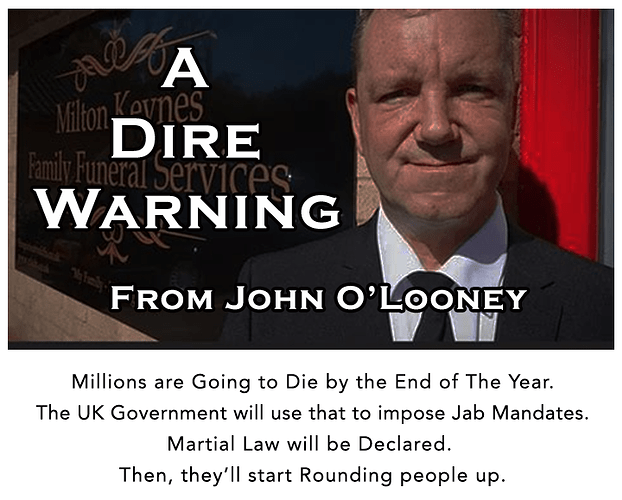 A Dire Warning from John O'Looney. Mirrored - The Crowhouse

The evidence they presented was undeniable. They suspect by the end of October, November, December, the death rate is going to be exclusively in jab recipients and millions and millions will die.

This senior member of Parliament just sat there (when the evidence was presented to him). He wasn't phased at all. He kept glancing at his watch and it was clear to me that he actually knew what was being told to him anyway.

Again, this minister didn't flinch. HE KNEW WHAT WAS GOING TO HAPPEN. He wasn't dismissive. He was engaged. He knew. And everyone around the table told him that there was going to be major civil unrest when people realize what's been done to them.

He confided in the one who walked him to his car and said he was surprised it hasn't happened already.

The millions getting sick and dying will be the opportunity for the government to MANDATE and force vaccinate; and also for MARTIAL LAW here in the UK. The next step is they'll start rounding people up. (They will blame the deaths on the unvaccinated, whereas the reality is that it is the vaccines that are killing people, not the unvaccinated).

I think the government has prepared for that. The feeling is that if they can't cope with it that it will be the EU soldiers that come in.