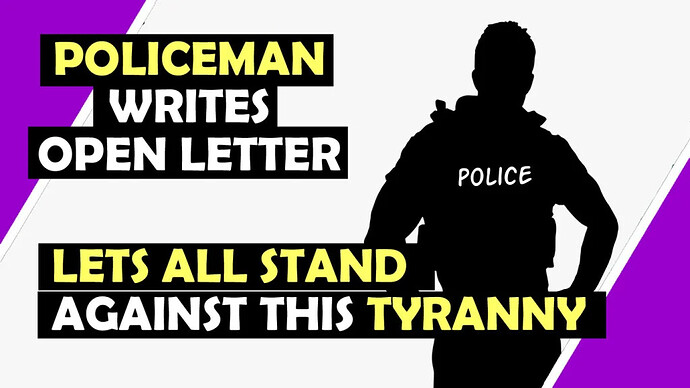 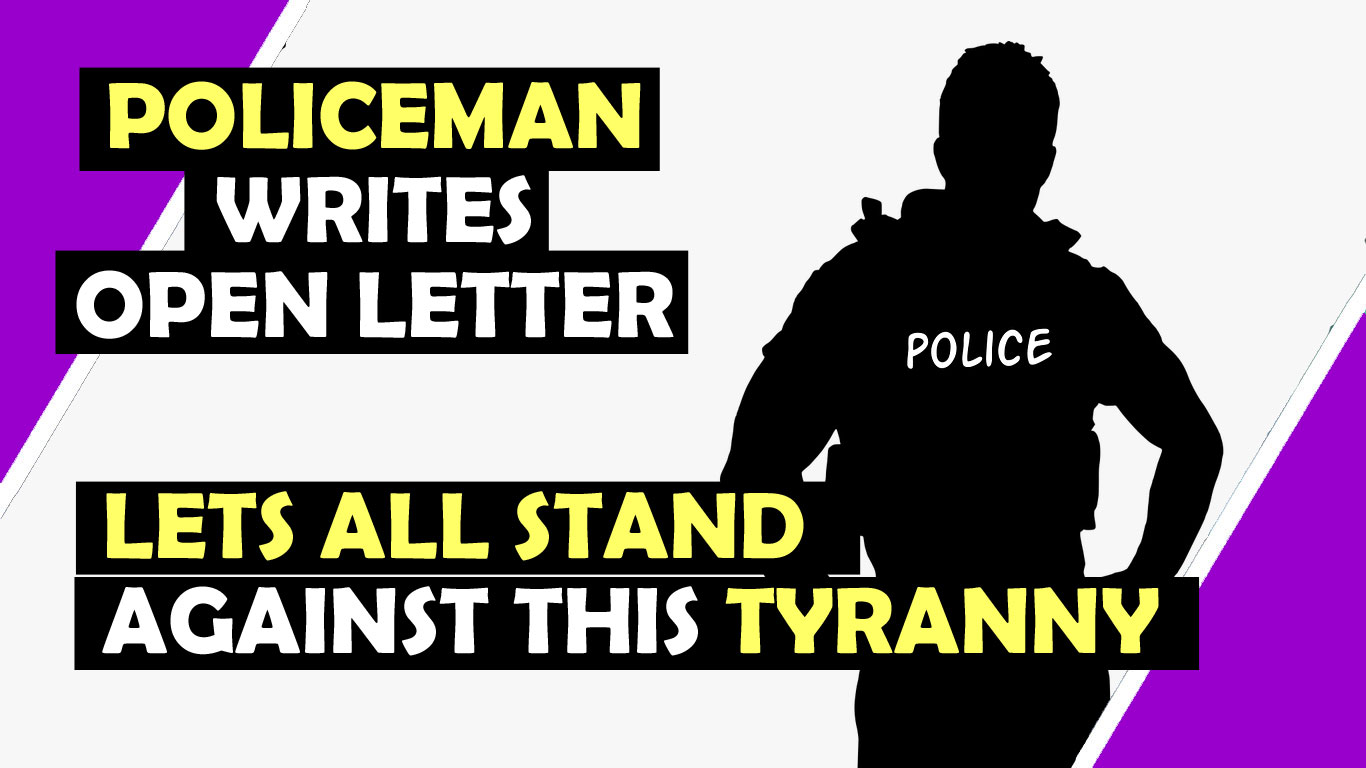 This is my open letter, as a policeman, today in the United Kingdom and Northern Ireland.

I have over 20 years service, and as a ranked detective I am a professional investigator. I pride myself on being able to independently gather and assess information, establish its credibility and provenance, and provide a conclusion based upon the facts. No less than what you would expect of me professionally.

Being a police officer makes you cynical and skeptical for obvious reasons, good news isn’t something you're employed to deal with on a daily basis.

I was told when I joined we form part of a Tripartite system of governance along with Central and Local Government, but it was emphasised that we were “independent”. I was also told that if you were given an order that was unethical or unlawful that we could not only resist the instruction, but we had a DUTY to not comply with that instruction. Most importantly, and the primary reason why officers in the UK are not armed, is that we police by the CONSENT of the people.

I am keen on reading military history, global policing techniques (books on FBI cases studies, etc) and geopolitics, so it was very easy to piece together and see the dark side of history repeating itself over the last 19 months. Perhaps you reader do not see it, so let me help guide your path.

My first warning was the use of endless propaganda across every media format, death tolls being used as a nightly metric on the news …The news channels who suddenly ubiquitously meld into the one voice of the government, with very few minor, if not hidden exceptions.

I applied my training in a serious manner having spent hundreds of hours delving into the COVID -19 “pandemic” and could hear Churchill’s words in my mind, “Never let a good crisis go to waste”.

I established beyond doubt that the PCR test is not designed to detect disease and was enormously open to fraudulent abuse when used at cycles higher than an upper limit 30. Numerous F.O.I requests regarding PCR testing in the UK confirms they are using cycles as high as 45 which highly skew results in favour of a positive result.

I established that Asymptomatic Spread not only defies conventional and long settled science ( and lets not forget common sense! ) , but is totally unproven. In fact in a very recent CDC document (April 2021) a study entitled - Analysis of Asymptomatic and Presymptomatic Transmission in SARS-CoV-2 Outbreak, Germany, 2020 - it can be summarised as quickly as - “In conclusion, our study suggests that asymptomatic cases are unlikely to contribute substantially to the spread of SARS-CoV-2.”

I established that through endless peer reviewed studies that lockdowns and masks are highly damaging to society and individuals. Some 37 studies defying masking alone. Let’s not miss the emphasis on what Peer Reviewed means, because these studies have withstood scrutiny applied from scientific strangers, to poke and prod and fault find the results.

These are NOT benign interventions.

The mental torture of separation from friends and family

The mental health consequences of these stressors, ultimately, and pretty obviously, a very predictable a large rise in suicide …… SUICIDE !! especially in young people who know the future is looking pretty bleak.

With the propaganda machine in full flow, death metrics became normalised for daily consumption. Endless “worry”. The gross skewing of positive (highly unreliable) tests being transformed into “cases”, a different meaning entirely. The deaths being counted by national statistical offices as COVID 19 Deaths which were, for among other reasons, trauma based WITH a positive test in the preceding 28 days. Or as unbelievable as this sounds, Irish whistleblower nurses swabbing dead bodies for test results. Just obscene.

The endless Censorship, which is NEVER a component for Democracy. The end of debate.

The national death rate barely wavering in 5 years and UK undertakers repeatedly proving that they are no more busy than ever, despite the world being in a “Pandemic”. Some even report less so.

The public being convinced by and large that Healthy people were actually sick and spreading disease.

Hancock and his fake tears on the news followed by his predictable staged exit now. We know that Midazolam, a strong sedative used in anaesthesia which acts as a respiratory depressant, was used on our most loved parents and grandparents when they were most vulnerable as they were suffering from respiratory complications. Midazolam use and death in the elderly during Covid 19 has a direct correlation which proves beyond all shadow of doubt that they were essential euthanised by unwitting care home staff.

BNF is only available in the UK | NICE

The psychological warfare, use of behavioural scientists such as SAGES Susan Mitchie to create division in society, to create fear in society, to implant slogans and inaccurate “scientific” beliefs. To censor debate and essential grease the wheels for authoritarianism.

Importantly, the cover ups from the media who refuse to highlight incidents and protect the public from endless vaccine deaths and injuries. Now everyday people are willing to look the other way as it’s too uncomfortable for their first world cosseted lives. There are families of the dead and injured pleading to he heard, so have the basic humanity and decency to listen! Do you think they are making it up? That they are liars? On what grounds?

The Government are pushing the vaccination age lower and lower for young and healthy people at such an enormously low risk its negligible. Thus the vaccine, even if I am to be generous enough to factor in some perceived “benefit” is still MUCH MORE dangerous than getting Sars-Cov-2.

For reference Brian Brindles Infection Fatality Rate IFR, (the deaths divided by the number of people regardless of whether of not they have symptoms themselves) which is essentially, the chance of death if you get the virus..

And on and on

Most noteworthy is that in young people the risk of death from Sars-Cov-2 is FAR LESS than that of Influenza. If you have had to close your business in the last 19 months how could you not be absolutely livid about this!?

I could go on and on, but many will already nodding along and aware of these foregoing facts and figures.

The motive? It’s all for two things. Money and Power. These companies are making billions. Do you know who they are?

The Bill and Melinda Gates Foundation have established a monopoly across the Media, Health Organisations, Vaccine development and Digital Identification programs.

In 2020 the BMGF gave $79 million to the Imperial College in London who have reported mindless nonsense of 40 million worldwide deaths if COVID19 is left unchecked. Remember the 98% recovery rate?

Gates influence is far too pervasive. Despite being proclaimed as a kind philanthropist he has DOUBLED his personal fortune and publicly stated his return on vaccines is the best investment he ever made with a 20 to 1 return. The conflict of interest is undeniable.

The BMGF conducted vaccine trials in India and Africa which violated the consent of children who were exposed to and damaged by their trials. These countries are selected plainly because of a less strict regulatory atmosphere which in essence means that the impoverished people of the third world become guinea pigs. There was an absence of consent or recording of side effects and or deaths in both cases.

Controversial vaccine studies: Why is Bill & Melinda Gates Foundation under fire from critics in India? - The Economic Times

Johnson and Johnson cannot even make talcum powder without including asbestos for goodness sake!

In fact they KNEW for decades!

Is this not the most obvious global criminal conspiracy, and not one without a deluge of evidence?

Have you been so desensitised that you cannot even conceive the blindingly obvious?

Back to policing and the whole point off my letter

I swore an OATH. An oath to protect people and uphold their rights. To unite the community and to protect and serve the people. I am a PUBLIC SERVANT. And I am proud to be one in that sense.

Our principle commitment is to protect and preserve life above all other considerations.

I have waited a very long time. I am waiting for a Chief Constable, or a General Secretary of a Police Federation, or perhaps even a member of the HM Inspectorate of Constabulary to raise their voice.

Are they too naive to see where this goes?

Are they too unwilling to put their head above the trenches they know they will have it shot off?

Are they cowards?, more interested in their big salaries and perceived legacy?

I can tell you that there are very many police officers at a range of ranks who greatly fear being used as the governments iron fist. We were neutered in the 1980’s, we can’t strike and we get treated like dirt by our various forces.

The frightening fast cataclysm we have been experiencing has undermined our democracy in a massive way. If you don’t see that yet then perhaps as Orwell suggested you're waiting for “a boot on your neck” before you realise.

The authorities NEED the police to enforce their plans. They need the armed forces if that’s not enough.

WE ARE THE PEOPLE.

It's our mums and dads, brother and sisters, sons and daughters who will suffer. This isn’t an elite occupation, its composed of the working and middle classes who are prepared to do the dirty work and deal with dead bodies and violence for a living.

I for one will never betray the people of the UK and Northern Ireland.

On a moral Basis, and due to my sincerity when taking the oath of office of constable

I WILL NOT ENFORCE CORRUPTION

I WILL NOT FACILITATE SOCIAL TORTURE

We need a #METOO movement for the police and soldier who do not want to be transformed into modern day nazis. Read - Ordinary Men (by Christopher Browning) about how in 1942 Germany, average German men, a reserve police battalion, who were not evil fanatics, got caught up in the wheels of authoritarianism by being brow beaten and lied to and ultimately, through psychological stress, they conform and defer all decision making to authority, ultimately participating in genocide.

I will conclude with John Stuart Mill’s 1867 inaugural address at the University of St Andrews:

“Let not any one pacify his conscience by the delusion that he can do no harm if he takes no part, and forms no opinion. Bad men need nothing more to compass their ends, than that good men should look on and do nothing. He is not a good man who, without a protest, allows wrong to be committed in his name, and with the means which he helps to supply, because he will not trouble himself to use his mind on the subject”

THIS IS OUR COUNTRY.

I appeal to ALL Police OFFICER and SOLDIERS to draw a line in the sand and decide which side of history you wish to stand on.

Thank you for reading.

Love and Respect to all.

Will the Royal Gibraltar Police (RGP) do the right thing?

FRENCH POLICE - WE SERVE THE PEOPLE NOT THE GOVERNMENT!

2 Likes
From Lockdown to Police State: the “Great Reset” Rolls Out - Coming to your neighbourhood, if you don't stop them, now