UK Gov Lying: 23.5M in England Have NOT had a Single C19 Jab – Plus More on Gibraltar's Booster Propaganda 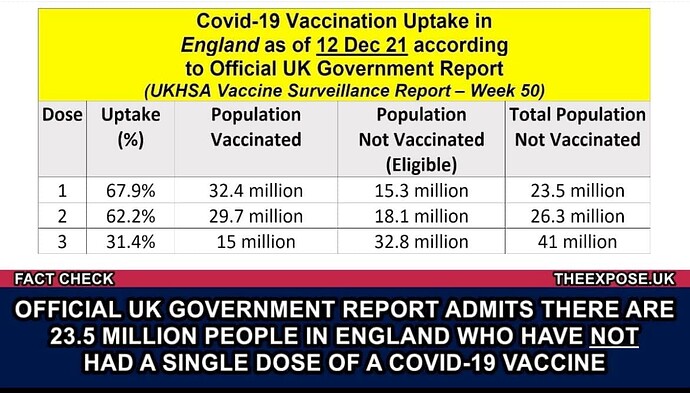 For months the British public have been deceived with tales that there are just 5 million people in the United Kingdom who have refused to take up the offer of a Covid-19 vaccine. But today we can reveal that this is a lie.

It is a complete fabrication that has no doubt been used to make those who have refused the jab feel as if they are part of a minority, because an official UK Government report proves that in England alone there are approximately 23.5 million people who have not had a single dose of a Covid-19 vaccine.

The population of England is approximately 56 million.

It was back in September that the British public were told there were 5 million Brits who had so far refused the experimental jabs. Sir Patrick Vallance, the UK’s Chief Scientific Advisor and former president of GlaxoSmithKline, announced in a televised Covid-19 briefing that “There are five million or so people who are eligible for vaccines now who haven’t been vaccinated,”.

Well it turns out the “or so” make up approximately another 10.3 million people in England alone as of December 17th 2021, bringing the grand total of people eligible to have the Covid-19 jab to 15.3 million, and 23.5 million when including all children under the age of 12.

Read more of this analysis on Daily Expose.

Obviously, Gibraltar doesn't have an over 100% vaccination rate, although it makes for catchy headlines.

There's always a caveat to what it means, which usually has to do with of those eligible (ie adults - at the time); or adding cross-border workers which could easily inflate the numbers.

Below are some posts where unvaccinated in Gibraltar are mentioned:

“It is obvious from the data coming in from all over Europe that the new Delta variant is spreading everywhere like wildfire. There are people who have had COVID-19 before who are becoming infected again, and this is happening even to those who have been double-vaccinated. It is also clear that vaccinated people are better protected against the virus and this can be seen in the low number of hospital admissions, only one in Gibraltar in the last few months, since the vaccines started to provide a shield which reduces the impact of COVID-19.

HMGoG on Omicron – Same script really – “The Omicron variant is highly transmissible so get your booster shot to bring our level of immunity back up and protect our GHA." And Helen Carter saying: "There is evidence to suggest that three doses of the Pfizer vax can generate a neutralizing effect against Omicron."

Carter went on to try to explain away the fact that cases are rising despite total compliance with the jab program.

“So we know that with all vaccines, our immune response fades over time,” she said. “And covid vaccines are no different to other vaccines, so that’s why we need to boost our population.”

Residents of Gibraltar do have the option to “exercise their own judgment,” the government says. But people are “strongly” advised to stay at home forever and take whatever injections are presented to them as boosters 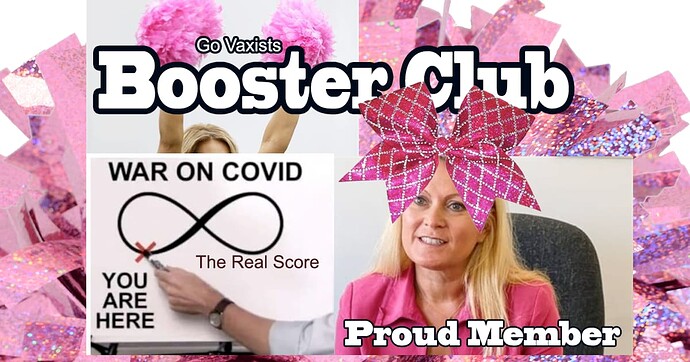 One also has to ask is the omicron covid symptoms just vax side-effects they are trying to cover – Vaccine ‘Side-Effects’ Might Actually Be Covid, Study Warns.

And there's also the 5G angle – Study: 5G exposure a “significant factor” in higher covid cases, deaths. Investigate how the Spanish Flu was tied into electricity – Isn't it time to unmask this criminal conspiracy? - #7 by A_Freeman

They Want This Nightmare To Last Forever! Covid-19 Plandemic

They've known all along more boosters were coming... they just have to come up with reasons - like the omicron. A FOURTH and FIFTH jab to fight Covid: UK orders 114m extra vaccine doses - enough to keep country supplied with booster shots for two more years Ministers have bought 114million more doses of coronavirus vaccines that can be tweaked to protect against new variants. The extra Moderna and Pfizer jabs will be delivered in 2022 and 2023, giving the UK a steady supply for the next tw… 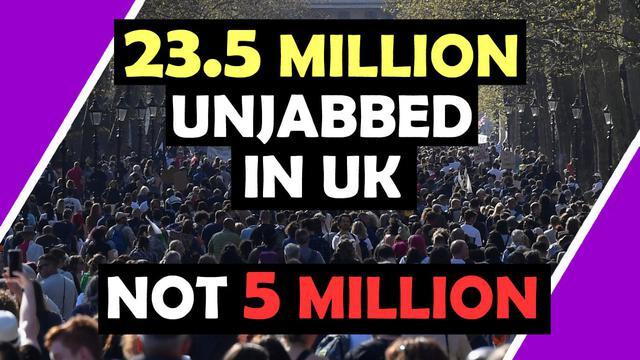 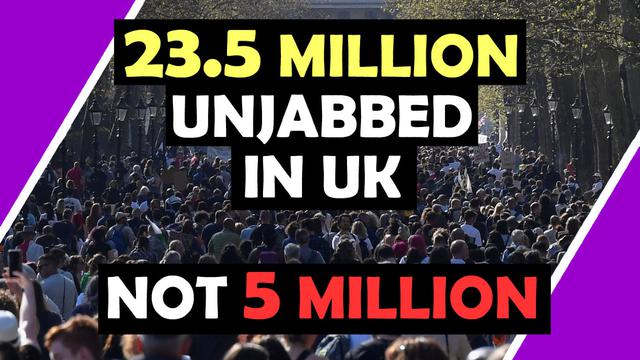 Entire hospital units could be forced to shut because of staff quitting in protest at the government’s order that they must all be vaccinated against Covid-19, a senior NHS leader has warned.

Chris Hopson, the chief executive of NHS Providers, said that at one hospital trust in England, 40 midwives were refusing to get jabbed, raising fears that the maternity unit may have to close. 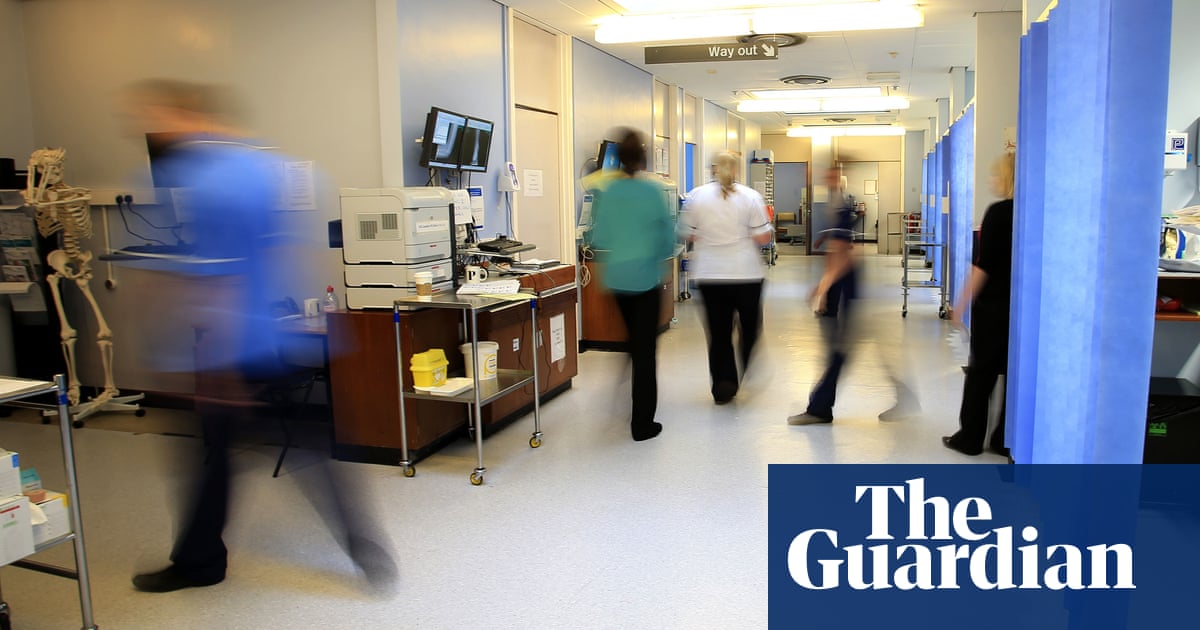 Vaccination rule comes into force in April but many staff are unwilling to participate, warns NHS Providers chief

If you account for the people that have only had one dose and not bothered with the second jab (that’s been around since July) that’s almost 50 million people that haven’t done as they were told.

67 million people in the UK. 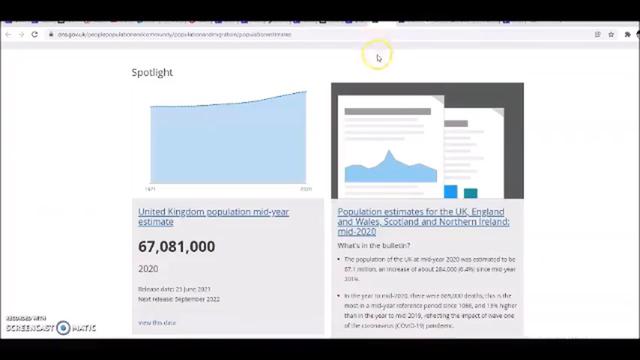