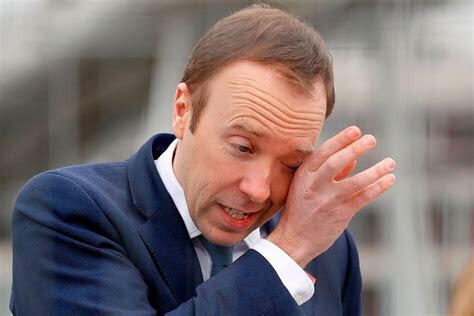 Isn't part of the Protocols of the Elders of Zion to discredit and disgrace the politicians – or was he a sacrificial offering?

The most interesting headline about Hancock:

Whilst you’ve been distracted by Hancock’s affair, PHE released a report revealing 62% of alleged Covid deaths are people who’ve been vaccinated:

Whilst you've been distracted by Hancock's affair, PHE released a report...

Breaking news on the morning of Friday June 25th revealed Matt Hancock has been having a secret affair with his aide Gina Coladangelo. We imagine it’s all the

But because you’ve been busy delighting in Hancock’s embarrassment, you’re probably not aware that Public Health England released a report on the very same day which showed the majority of alleged Covid-19 deaths are significantly higher in people who have had at least one dose of the Covid-19 vaccine, with the highest number of deaths occurring in people who are supposed to be fully vaccinated.

Many on social media recalled Mr Hancock’s harsh criticism of Professor Neil Ferguson after the government adviser was found to have broken lockdown rules by arranging visits from his lover last year.

In May 2020, the health secretary claimed to have been left “speechless” by Prof Ferguson’s “extraordinary” behaviour, and said it had been right for him to resign as a government Sage adviser. (Source).

His replacement – Sajid Javid, the former Chancellor of the Exchequer and the former Home Secretary, was announced hours later as the new Health and Social Care Secretary (Source). Javid, also a former banker and possible tax evader, landlord, was a prominent supporter of the unsuccessful Britain Stronger in Europe campaign for the UK to remain in the European Union.

Something Else People Are Overlooking –

Committing Adultery is Against God's Law – THE 12 COMMANDMENTS (10+2)

NHS Doctor: Matt Hancock is “Not Fit for Public Office and Needs to be Removed Before He Inflicts Further Harm on the People of this Country”

From Malice in Wonderland

In this wonderland where wealth and amorality cavort with disillusionment and disbelief, and a media-poodle that imagines balance when it matches truth speech with idiotic ramblings of dissembling loons

misleading, insanely disingenuous and entirely uninformative briefings], open malice is appreciated; she shines back at you,through the looking-glass. You know where you are. In a f***ing nightmare. But it's yours, you've embraced your pain, and you are consoled by that.

When reality is horrifying, hinted the Red Queen in Carroll's Alice through the Looking-Glass, such as when Hancock is Minister of Health, instead of being a bookie at Newmarket, what better for rich and poor alike than a good fantasy!

Hugo Talks – PUPPET HANCOCK RESIGNS, Who are The Puppet Masters?

PUPPET HANCOCK RESIGNS, Who are The Puppet Masters?

Hugo said that Hancock's resignation came early because of the London Protest on Jan. 26. He also discusses the Hydra.

It's interesting Hugo tied it into the protest, because the new puppet Sajid Javid news reads "Sajid Javid to push for an end to lockdown 'as soon as possible'"

He's being touted as a "lockdown skeptic". Was this just rhetoric to appease the protestors? Can we put a lie-meter on this one? What does 'soon' mean – July 19? Sajid Javid is 'lockdown sceptic' and has vowed to end all restrictions on July 19

Also Javid's quote is actually – “We are still in a pandemic and I want to see that come to an end as soon as possible."

"Pandemic" and "Lockdown" aren't necessarily interchangeable. Think about it. They are pushing that the pandemic won't end until everyone is "vaccinated", so as soon as they have 80% or more jabbed, they will consider that a success.

Javid continued, "“That will be my most immediate priority to see that we can return to normal as soon and quickly as possible.”

His message seems perfectly timed to the frustration. A little hope...

They tell you why they give hope in their propaganda: They give you enough hope to stop you rebelling.

But what would happen if all hope were to be extinguished? A world without hope would be a dark place indeed. Such a world would be impossible to live in. And if you take away people’s hope for a better future, you take away all that is left of their humanity and dignity. Source

The removal of hope leaves only one possible response, and that response is desperation. People can respond to desperation in different ways. Basically, only two roads are open to them. One is the road of passivity, apathy, and ultimately the conclusion that life is not worth living. But there is another road. Human beings are very stubborn creatures, and will not willingly draw the conclusion that there is no way out. The second road is the road to revolution. Source

Hope is given – then pulled away. Lockdowns will end – no they won't. Vaccines will end lockdowns and mask mandates – no they won't, because these restrictions will continue. (Read the headlines).

6:10 Finally, my brethren, be strong in the Lord, and in the power of His might.
6:11 Put on the whole armour of God, that ye may be able to stand against the wiles of the devil.
6:12 For we wrestle not against flesh and blood, but against principalities, against powers, against the rulers of the darkness of this world, against spiritual wickedness in high [places].
6:13 Wherefore take unto you the whole armour of God, that ye may be able to withstand in the evil day, and having done all, to stand.
6:14 Stand therefore, having your loins girt about with Truth, and having on the Breastplate of Righteousness;
6:15 And your feet shod with the preparation of the gospel of peace;
6:16 Above all, taking the Shield of Faith, wherewith ye shall be able to quench all the fiery darts of the wicked.
6:17 And take the Helmet of Salvation, and the Sword of the Spirit, which is The Word of God:

Never forget Matt Hancock has blood on his hands - Let's start with the 232...

The Health Secretary; Matt Hancock, who has been drunk on power for the past fifteen months has finally relinquished his draconian powers due to footage exposin

Matt Hancock, on the other hand, urged pregnant women to get an experimental vaccine when they were called to do so –

Dear Matt Hancock, please get your act together before you kill any more people

Dear Matt Hancock, please get your act together before you kill any more people

If his own wife cannot trust him, how can we?

I never thought I would be encouraging you to follow a link to the Sun, but these are strange times and for once The Sun should be acknowledged for doing what the MSM should be doing but often doesn’t: exposing corruption and malfeasance amongst those entrusted with the helm of the nation.

Can you imagine how much better our world would be if the media actually did its job and acted as a Watchdog dedicatedly alerting the public when shenanigans are detected?

So here is The Sun’s expose of Matt Hancock having an extra-marital affair with is aide.

To compound the felony, this has been apparently in contravention of social distancing rules.

However, Hancock is not not the first member of the Covid Gang of Loons to violate the gov’s own rules in order to engage in a bit of hanky panky....

by Fabian Ubiquitus I never thought I would be encouraging you to follow a link to the Sun, but these are strange times and for once The Sun should be acknowledged for doing what the MSM should be …