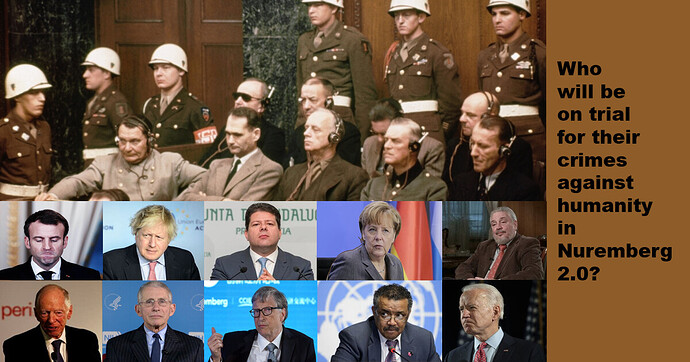 They will all be tried for crimes against humanity.

And don't forget to include Der Fuehrer Picardo and his cronies.

Good news! The central bankers have overreached and exposed their sinister network to all and sundry.

Far from resulting in permanent planetary lockdown (Communist Agenda 2030,) this misstep will cost them their monopoly over government credit and result in a rebirth of freedom.

There is no way the human race is going to accept toxic vaccines, masks and social distancing indefinitely. Once the next flu season arrives and people realize this is never going to end, they will rise up against the traitors who have inflicted so much needless damage and death on millions of people.

Nobody is talking about this because the pharmaceutical industry exercises control over political leaders, all of the institutions in a democracy that were set up in order to protect vulnerable little children from greedy corporations have been neutralized. The agencies that are supposed to protect us and protect our children from bad products have been completely co-opted. They are captive agencies....

The World Health Organization gets over 50% of its budget from pharmaceutical companies.

Rupert Murdoch owns the biggest vaccine company in Australia. His family has been deeply immersed in that industry for generations, and he has partnerships with Glaxo and with all the big vaccine makers.

Gates is a leading funder for the World Health Org & the CDC. Those agencies are now the marketing arms of his vaccine empire.

The Cover-Up Continues: The Truth About Bill Gates, Microsoft, and Jeffrey Epstein

While more revelations about the Bill Gates–Jeffrey Epstein relationship have begun trickling out following the Gates’s divorce announcement, the strong evidence pointing to their relationship beginning decades prior to 2011 continues to be covered up by the media—not necessarily to protect Bill but to protect Microsoft.

A long and tangled web of deception, with named politicians, NGO's, wealthy individuals, industry, and countries.

Their blackmail operations and illegal surveillance with strong ties to the US and Isreal. Working with breakneck speed to usher in the Fourth Industrial Revolution, which would make artificial intelligence, automation, mass electronic surveillance, and transhumanism central to human society.

One such operation from this power structure is to produce human tissues and organs inside pigs for transplantation into humans, while genetically modifying pig organs for use in humans.

Another piece is Gates’s ties to Isabel Maxwell and the Israeli espionage–linked company CommTouch were to become public knowledge, the result could easily be a scandal on a par with the PROMIS software affair. Such a disclosure could be very damaging for Microsoft and its partner the World Economic Forum, as Microsoft has become a key player in the WEF’s Fourth Industrial Revolution initiatives.

The close relationships with the Clintons and the foundations as well as the State Department during Obamas term in office.

The deep ties to the telecom industry, which was the inspiration for Elon Musk's Starlink

Dr. Walker who has climbed the ladder of the Gates Epstein and Rockefeller train, as well as "close personal ties to Prince Andrew, discusses how wearable devices, brain-machine interfaces, and injectable/ swallowable robotic “medicines” will be the norm by 2030. In 2016 she stated “sounds crazy . . . most of these technologies are either almost ready for prime time, or in development.” Of course, a lot of those technologies took shape thanks to the patronage of her former bosses, Jeffrey Epstein and Bill Gates.

The back door crimes against humanity, and the suffering of millions if not billions will end with the most sublime and enduring Victory of ALL time. As Henry Makow stated "Good News! God Wins (The War)

To really understand why communism has survived, we must understand It from a Biblical Perspective (Good vs Evil)

The Need for a Nuremberg for Communism Replace the destructive policies

The Need for a Nuremberg for Communism Renato Cristin – Communism has survived, why? We have seen a flood of books and articles praising communism and its nefarious leaders for decades. Almost no authorities, political, religious, or civil, raised their voices to condemn such impudence, such a display of ideological arrogance and insensitivity to the more than a hundred million victims caused by that ideology. Because all over the world there is a safety net that extends to all sectors of …