What hurts birds and bees also hurts you and me. 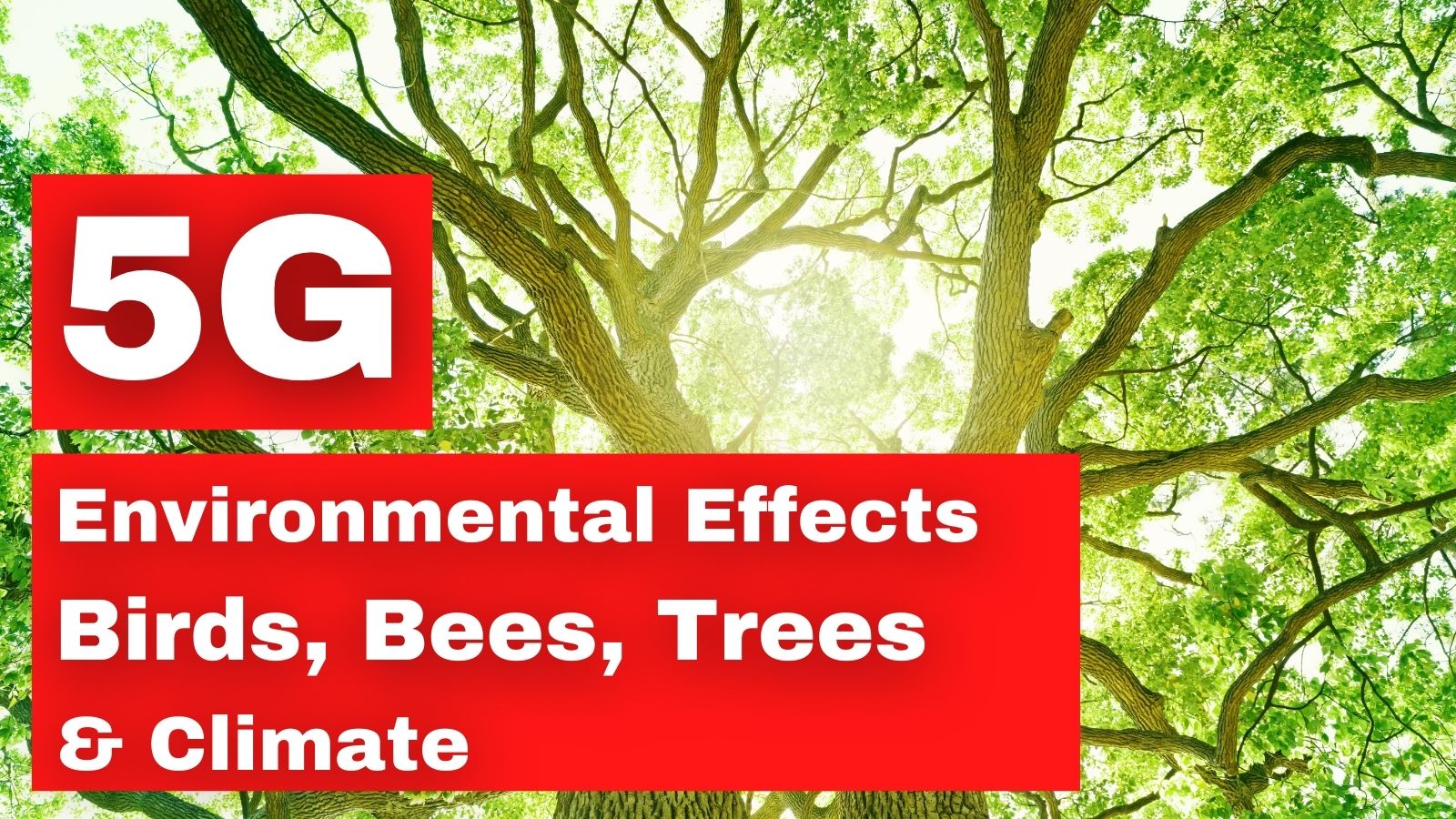 Watch EHT Executive Director Theodora Scarato review the environmental effects of 5G and cell network proliferation with a focus on trees, bees and birds. In addition, she documents the increased energy consumption and climate impacts of 5g and the...

Thanks to Environmental Health Trust for the non-profit’s new video and webpage devoted to the environmental consequences of small cell densification, 5G and IoT technology.

Video link is in the article.

SECTION 5 – WHO versus The CHALLENGERS

4 Likes
Barrie Trower: An Interview of Grave Importance to Humanity
Persistent August 6, 2021, 8:46am #2 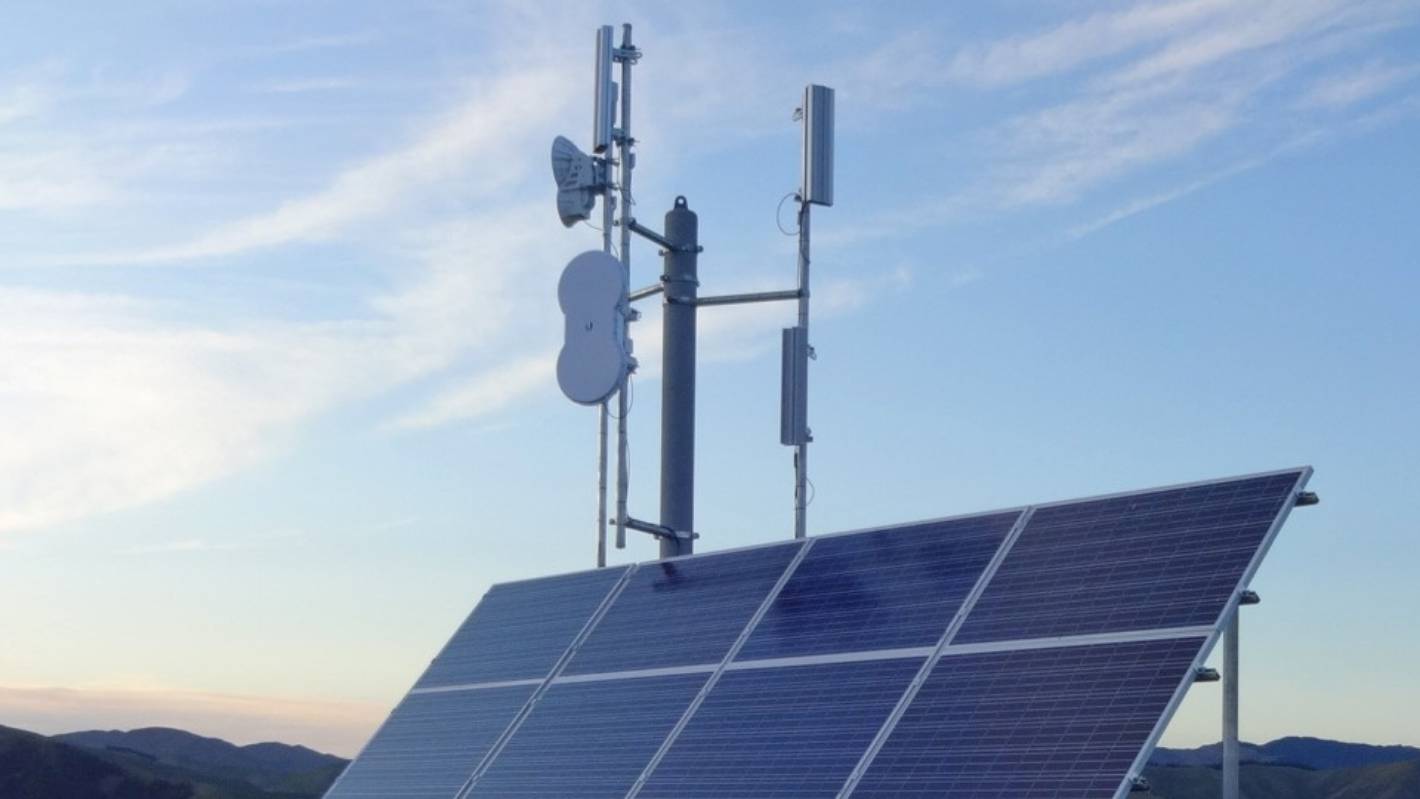 Deuteronomy 20:19 When thou shalt besiege a city a long time, in making war against it to take it, thou shalt not destroy the trees thereof by forcing an axe against them: for thou mayest eat of them, and thou shalt NOT cut them down to employ [them] in the siege (nor for market-economics) (for the tree of the field [is] man's [life] O2):
https://jahtruth.net/envird.htm

[Trees] Which was of course God's Law - specifically Deut. 20:19-20, Matt 5:17-20: their human-food producing quality: incl Oxygen - contained in the Pentateuch/ Torah (Deuteronomy being the 5th Book of The Torah/ Law). The Hill of Tara in Royal County Meath is named after the Torah, because the original version on scrolls is buried under that Hill: in The Ark of the Covenant, as discovered by JAH. Ireland's Arts Heritage and Gaeltacht Affairs has so far refused to give Him permission to dig …

...God has blessed us with a beautiful planet to live on, let's go back to keeping it that way. 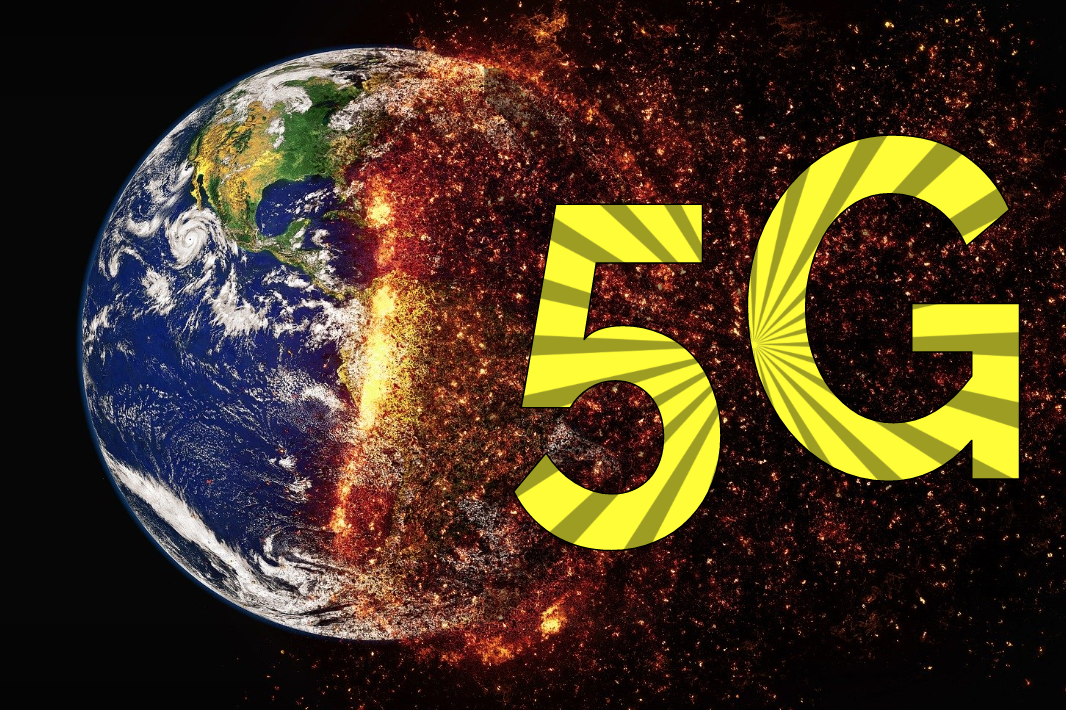 Climate Change, 5G and the Internet of Things  Download and share our Factsheet on 5G, Energy Consumption and Climate Change here. This factsheet is hyperlinked to research studies and a great resource to raise awareness. The unbridled energy... 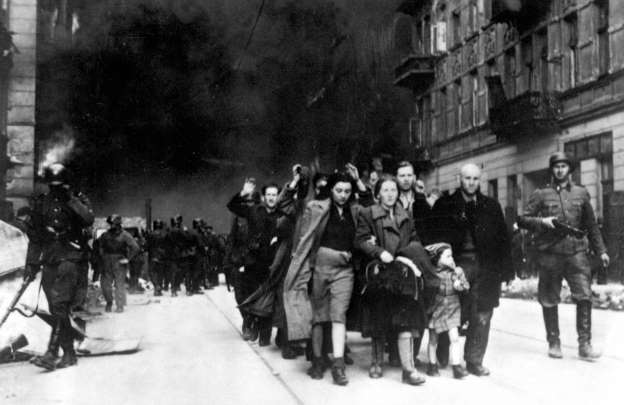 Article published: Dec. 30, 2018
History replicates. This dramatic picture is the perfect parable for our Microwave Age. On September 1, 1939, Nazi Germany invaded Poland to impose its violent and genocidal will upon the entire population of that nation. Employing a military strategy known as the blitzkrieg, or “lightning war,” Adolph Hitler expected to expand his territory, plunder resources and utilize the Polish population for slave labor. This image shows Heil-Hitler boys rounding up a group of Poles after the destruction of the Warsaw Ghetto in 1943. Nazi ghettos in Poland were fortified sections of cities designed as holding tanks for several millions of people, selected by race or religion, for eventual extermination. At intervals, ghetto dwellers were sent en mass to death camps like Treblinka, Auschwitz 1 and Auschwitz II-Birkenau where they died from forced labor, starvation, infectious diseases, individual executions and grotesque medical experiments. [4]

On February 8, the Telecommunications Act of 1996 (TCA) was signed by Bill Clinton, US president of the day. The passage of this tainted, industry-directed federal law was a blitzkrieg. It launched an occupying army of radiation peddlers authorized to impose– for profit and for slave labor (screen slaves)– their violent and genocidal will upon the entire population of the United States. This infamous law allows ruthless corporations and their collaborators to place cell towers on rooftops, in backyards, near school grounds and within public right-of-ways without adequate regulatory oversight and without proper health and environmental inquiry. Many of these corporations which freely pollute our lives are foreign-owned, including T-Mobile (Deutsche Telekom) and Sprint (Japan’s SoftBank Group Corp). Technocratic totalitarians empowered by the TCA now hold hostage the entire US population with lethal weapons just as deadly –if not more so– than Nazi guns that forced prisoners to the camps. 5G Dangers: What Every American Needs to Know Before It’s Too Late – The Millennium Report

5G: Great risk for EU, U.S. and International Health! Compelling Evidence for Eight Distinct Types of Great Harm Caused by Electromagnetic Field (EMF) Exposures and the Mechanism that Causes Them

We know that there is a massive literature, providing a high level of scientific certainty, for each of eight pathophysiological effects caused by non-thermal microwave frequency EMF exposures. This is shown in from 12 to 34 reviews on each specific effect, with each review listed in Chapter 1, providing a substantial body of evidence on the existence of each effect. Such EMFs: 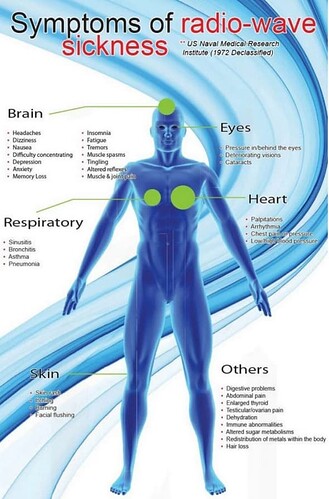 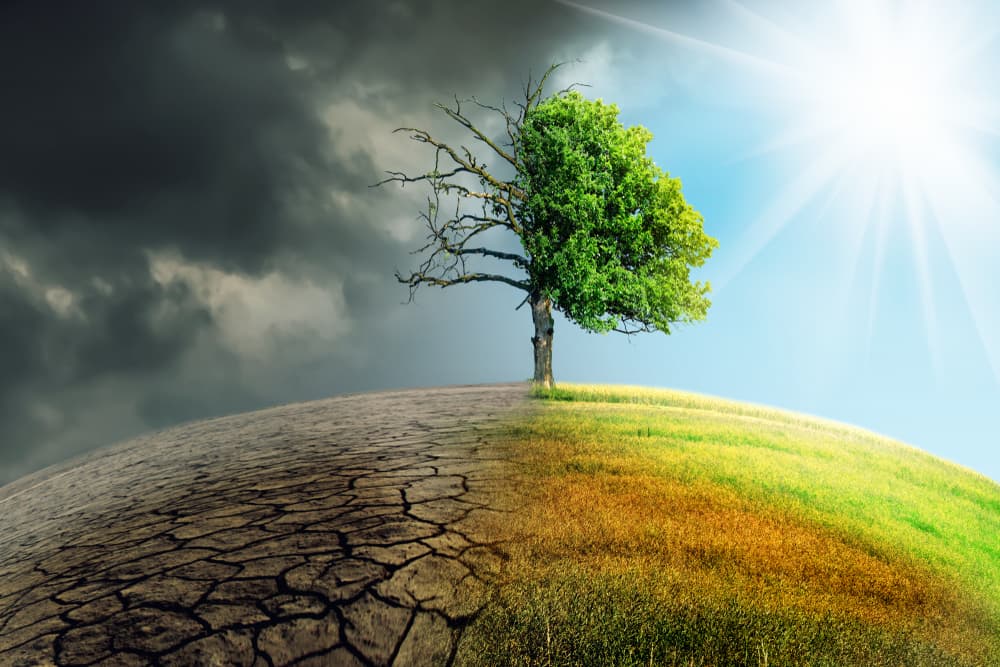 “Wireless radiation is ubiquitous in the world today but had only gained widespread use several decades ago. With the quickness in which it has been rolled out and utilized, many people have started to question its long-term impact, both on the environment and our health.” https://www.blacklistednews.com/article/77142/studies-show-cell-phone-towers-inflict-significant-damage-to-trees-and-human.html

Two highly recommended articles that need sharing far and wide to educate people on the damaging effects of 5G to the environment.

What Will 5G Mean for the Environment? - The Henry M. Jackson School of...

Beginning 2020, the fifth generation of wireless technology is expected to be widely implemented throughout the world. The new network, called 5G, promises to give faster speeds and a higher 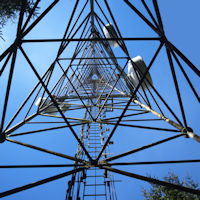 As COVID-19 lockdowns push more people online and 5G technology continues its rapid expansion, should the question of whether electromagnetic radiation causes health and environmental injury be raised anew? Yes, argues an award-winning freelancer who...

Many people ask “Where is the scientific evidence? How do you know that #5G and the deployment of small cells (which usually is #4G) is not safe?" Answer: Independent, not industry-funded, peer-reviewed research.

As stated in the Lancet: “This weight of scientific evidence refutes the prominent claim that the deployment of wireless technologies poses no health risks at the currently permitted non-thermal radiofrequency exposure levels. Instead, the evidence supports the International EMF Scientist Appeal by 244 scientists from 41 countries who have published on the subject in peer-reviewed literature and collectively petitioned the WHO and the UN for immediate measures to reduce public exposure to artificial electromagnetic fields and radiation.”

See examples of research clearly showing that wireless radiation and non-ionizing electromagnetic fields have biological effects. To state that 5G or 4G is safe is simply wrong. No such proof of safety exists.

Around the world, phone masts have been deployed in the last two
decades everywhere. Preliminary published studies have indicated del-
eterious effects of radiofrequency radiation on trees (Balmori, 2004;
Van't Wout, 2006; Schorpp, 2011; Waldmann-Selsam, 2007;
Waldmann-Selsam and Eger, 2013), cautioning that research on this
topic is extremely urgent (Balmori, 2015). However, these early warn-
ings have had no success and deployment has been continued without
consideration of environmental impact.

In a review of the effects of environmental microwaves on plants
(Jayasanka and Asaeda, 2013), it was indicated that effects depend on
the plant family and the growth stage, as well as the exposure duration,
frequency, and power density. This review concluded that most studies
that address the effects of microwaves on animals and plants have doc-
umented effects and responses at exposures below limits specified in
the electromagnetic radiation exposure guidelines and it is therefore
necessary to rethink these guidelines (Jayasanka and Asaeda, 2013).

Additionally, unilateral crown damage, beginning on the side facing
an antenna, pointed to a possible link between RF-EMF (Radiofrequency
Electromagnetic Fields) and tree damage. We carried out measure-
ments on both sides of unilaterally damaged trees. Most of the trees
had been exposed to RF-EMF for at least five years. Each time we found considerable differences between the measured values on the
damaged and on the healthy side.

Fig. 3. Map showing the 60 damaged trees and phone masts (both with code numbers) over the interpolation electromagnetic map of the 144 measurement points.

From all 60 selected trees, one or more phone mast(s) could be seen,
with no obstacles between the phone mast and damaged tree. In many
cases, one of the three closest antennas caused the main radiation on the
tree surface. In ten trees (codes: 4, 7, 9, 10, 15, 26, 27, 31, 35, and 50),
another antenna in direct line of sight caused the measured radiofre-
quency exposure. This was determined using topography and existing
buildings (Table 4 and Fig. 3).

In the electromagnetic field of all mobile phone base stations visited
numerous tree damages were observed. The damage occurred in tem-
poral relation with the putting into operation of new mobile phone
base stations. Woody plants of all species are affected (deciduous and
coniferous trees as well as shrubs).

Electromagnetic radiation from telecommunication antennas affect-
ed the abundance and composition of wild pollinators in natural habi-
tats and these changes in the composition of pollinator communities
associated with electromagnetic smog may have important ecological
and economic impacts on the pollination service that could significantly
affect the maintenance of wild plant diversity, crop production and
human welfare (Lázaro et al., 2016).
Evidence for plant damage due to high frequency electromagnetic
radiation was not taken into account in determining the current statuto-
ry regulations (the limit values). Once the problem becomes evident,
the guidelines of radiation emitted by the antennas should be reviewed.
Proper risk assessment of electromagnetic radiation should be under-
taken to develop management strategies for reducing this pollution in
the natural environment (Kumar et al., 2015).
Moreover, due to the lack of recognition, certain modern projects
with interesting ideas for decreasing environmental pollution could
have opposite effects than expected. For example, in the Netherlands,
the TreeWiFi project (http://treewifi.org/), which aims to motivate people
to use bikes and public transport in order to reduce the [NO2] pollution
providing free WiFi when air quality improves, could be favoring electro-
magnetic pollution with even more harmful effects as it has been demon-
strated in this manuscript (see also: Greenpeace Canada
fr/Blog/le-wi-fi-tuerait-les-ar-bres/blog/33569/).

I recently discovered that whenever I goto the park, I develop breathing problems, just discovered yesterday after reading this Environmental Damage that the buses emit dangerous poison making me I'll because whenever I remain home, I feel much better and improving than when I go to the bus park. Whenever am there, I develop breathing problems and funny pain with some kind of blocked breathing and so many effects.

Thank-you for sharing. Your problem of breathing is most likely created by a 5G, radiation being emitted into the air causing low oxygen levels. People need to fight this at all cost, it's a killer. 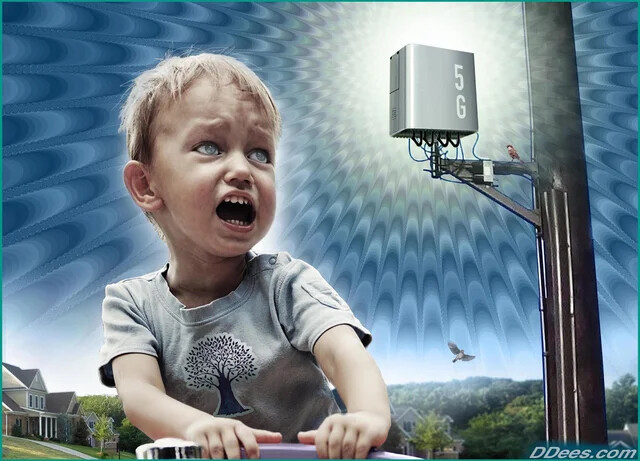 You are welcome. Thank you kindly.

So terrible, that poor child is still developing.

Agreed. A childs brain is susceptible due to the fact the outer cortex is still thin, not fully developed, and not thick like an adults outer covering of their brain. Barrie also brings out how children become totally addicted easily to devises to the point of wanting to kill to keep them. It's alarming to think what will happen when the net is shut off, how will they deal with not having their devices?.

It is highly recommended everyone read the whole article [Barrie Trower: An Interview of Grave Importance to Humanity, a super informative, eye opening experience. Julian Rose said, "This information is so extreme, so profound, so absolute vital, that I hope the audience will listen to this film at least twice to be able to take in the level of significance you are describing".

](Barrie Trower: An Interview of Grave Importance to Humanity)

Thank you, we didn't complete listening to it yesterday. Today it is seriously cutting, it keeps playing for seconds and stops like that, yesterday was very okay. Am being patient with it, thank you for sharing.

@Nam You are certainly welcome.
That is exactly why this long video/very important information was made into a dialogue from the video above for reading. 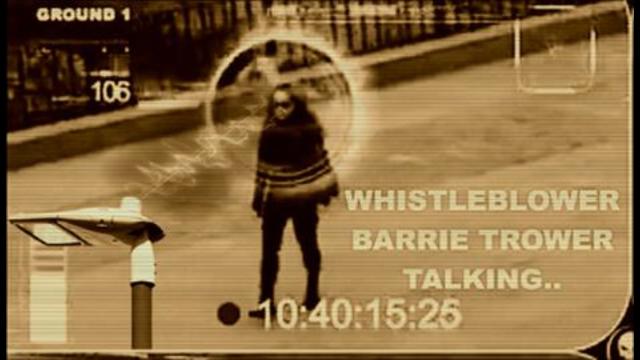 Source: NickMyer. The voice of Former British Military Intelligence agent Barrie Trower in this video can be heard whistle blowing on one of many methodologies used for tracking/surveillance and microwave warfare attacks on individuals. In this case…