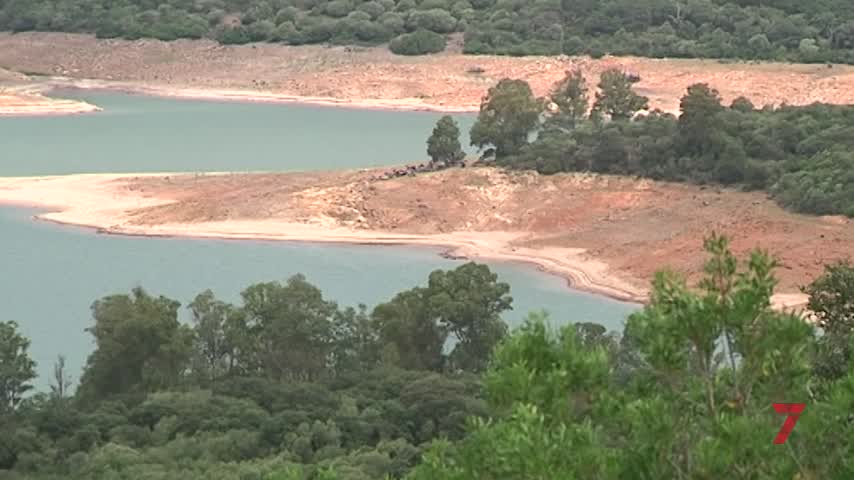 The Drought Board announced yesterday the water restrictions that will be applied from 18 April if the necessary rainfall does not occur in the Campo de Gibraltar. The objective of the measures to be adopted is to have 20 cubic hectometres available in the reservoirs at the end of September and to guarantee the supply to the population while awaiting the rains next autumn.

In compliance with the provisions of the Drought Plan approved by the Board of Directors of the regional public company Arcgisa and under the chairmanship of the president of the Association of Municipalities of Campo de Gibraltar, Juan Lozano, a new session of the Drought Committee has taken place.

The working meeting was attended by representatives of the eight municipalities of Campo de Gibraltar together with the technical heads of the companies that manage the water supply in the region (Arcgisa, Emalgesa, Egal and Aguas del Valle del Guadiaro), who were joined by representatives of the AGI (Association of Large Industries) and regional environmental groups.

In view of the current weather forecasts and the persistent lack of rainfall, based on the current situation of the Guadarranque and Charco Redondo reservoirs, and with the aim of guaranteeing the water supply in the Campo de Gibraltar for as long as possible, the drought committee has adopted a series of measures, including the start of water restrictions for the population as of 18 April, unless the long-awaited rainfall occurs.

The measures will involve reducing the pressure on the water supplied in such a way as to achieve a saving that will allow the reservoirs to reach some 20 cubic hectometres by 30 September, in such a way as to guarantee the supply to the population of Campo de Gibraltar until the end of the current year, while awaiting the rains of the period between October and December, the period in which there is traditionally more rainfall in the region. This reduction in pressure would be applied at night.

Likewise, during the session, an account was given of all the measures adopted to date, pointing out the need to reinforce surveillance of the prohibition of non-essential consumption, such as garden watering and street washing, among others, requesting the involvement of local governments by means of municipal bans and under the strict control of the local police.

President Juan Lozano pointed out that "we are facing a serious problem for our region and its citizens and we are doing so by adopting tough but necessary measures, which have the backing of all the actors involved". Lozano stressed that further meetings will be held with all the actors involved, maintaining constant communication on the evolution of the situation.

Drying up: Water disputes springing up as major drought stares Spain in the face. 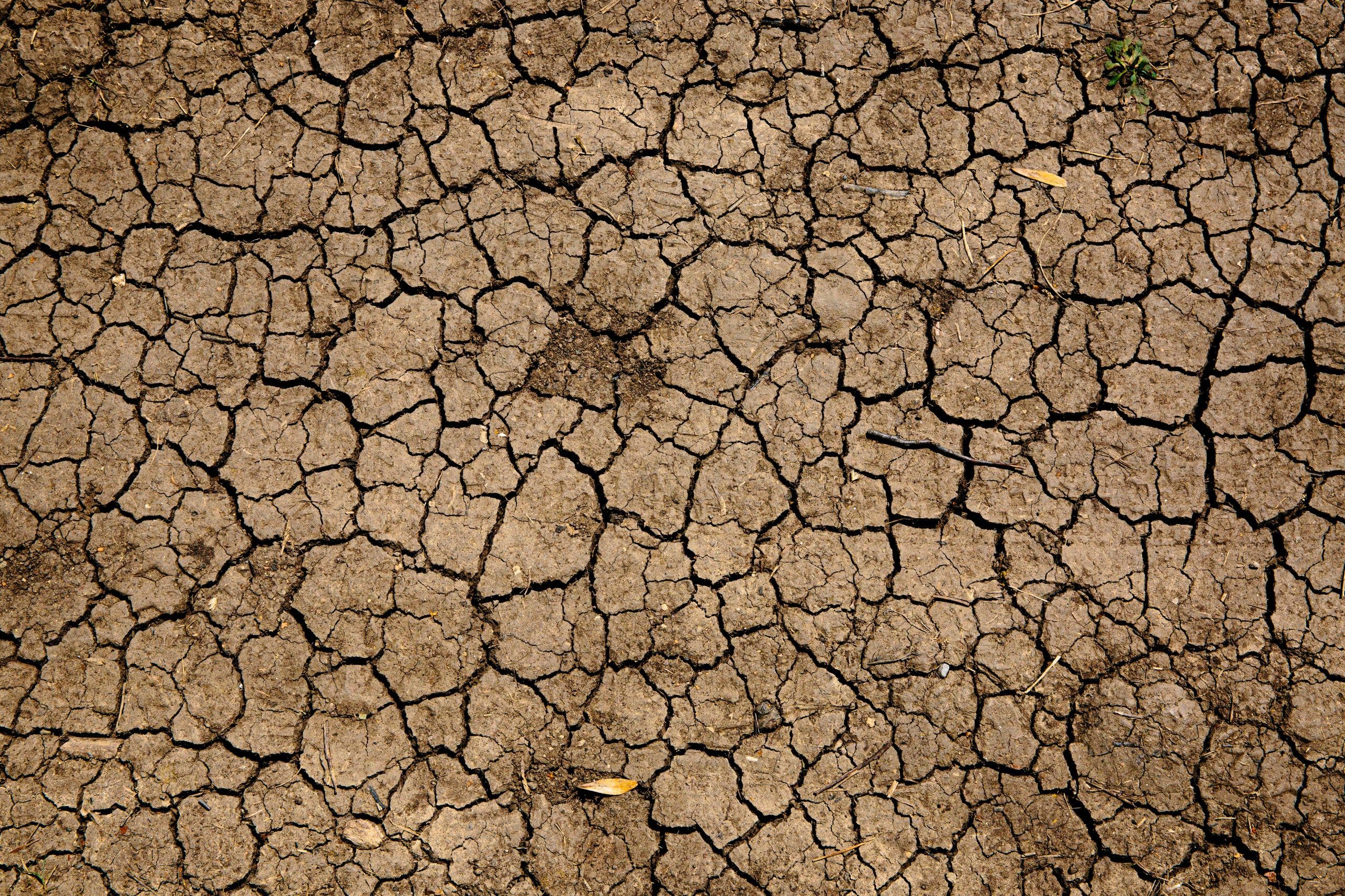 Drying up: Water disputes springing up as major drought stares Spain in the... 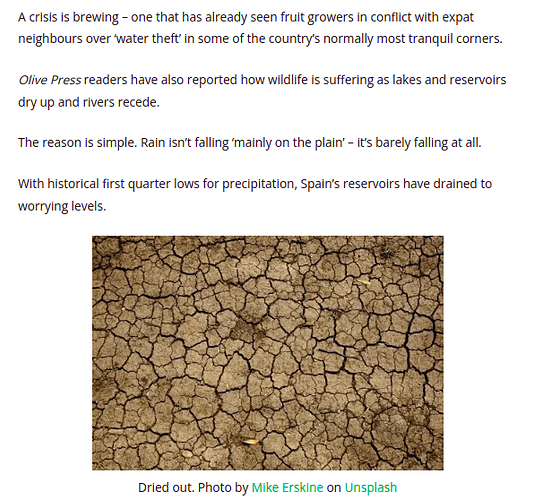 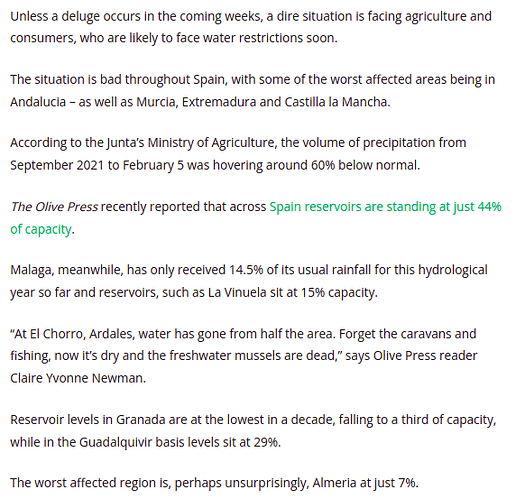 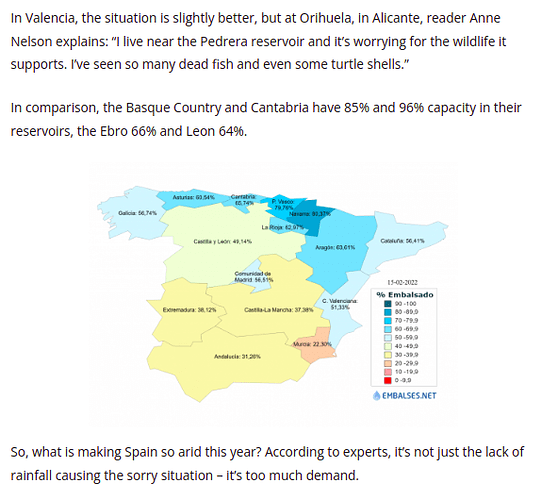 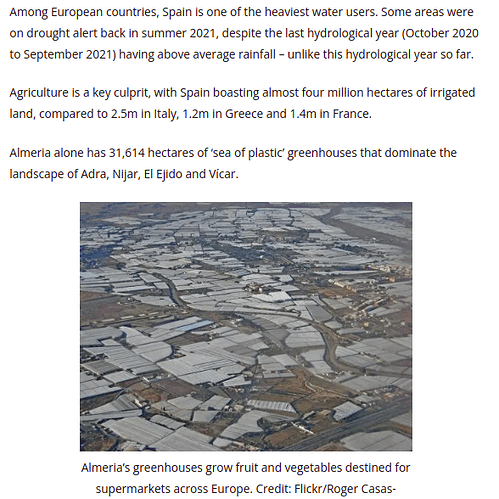 I'm sure it's not just an "Amerikan" thing, but major playas' have been steeling the water from underneath aquifers, for quite some time.
Of course then it's blamed on whatever they tell you at the moment. Don't know if that is going on in Spain, but as the President of Nestle once said - water is NOT A BASIC RIGHT or necessity, so the water does NOT belong to the people as far as they are concerned.
It is to be hoarded by them...
Water wars... 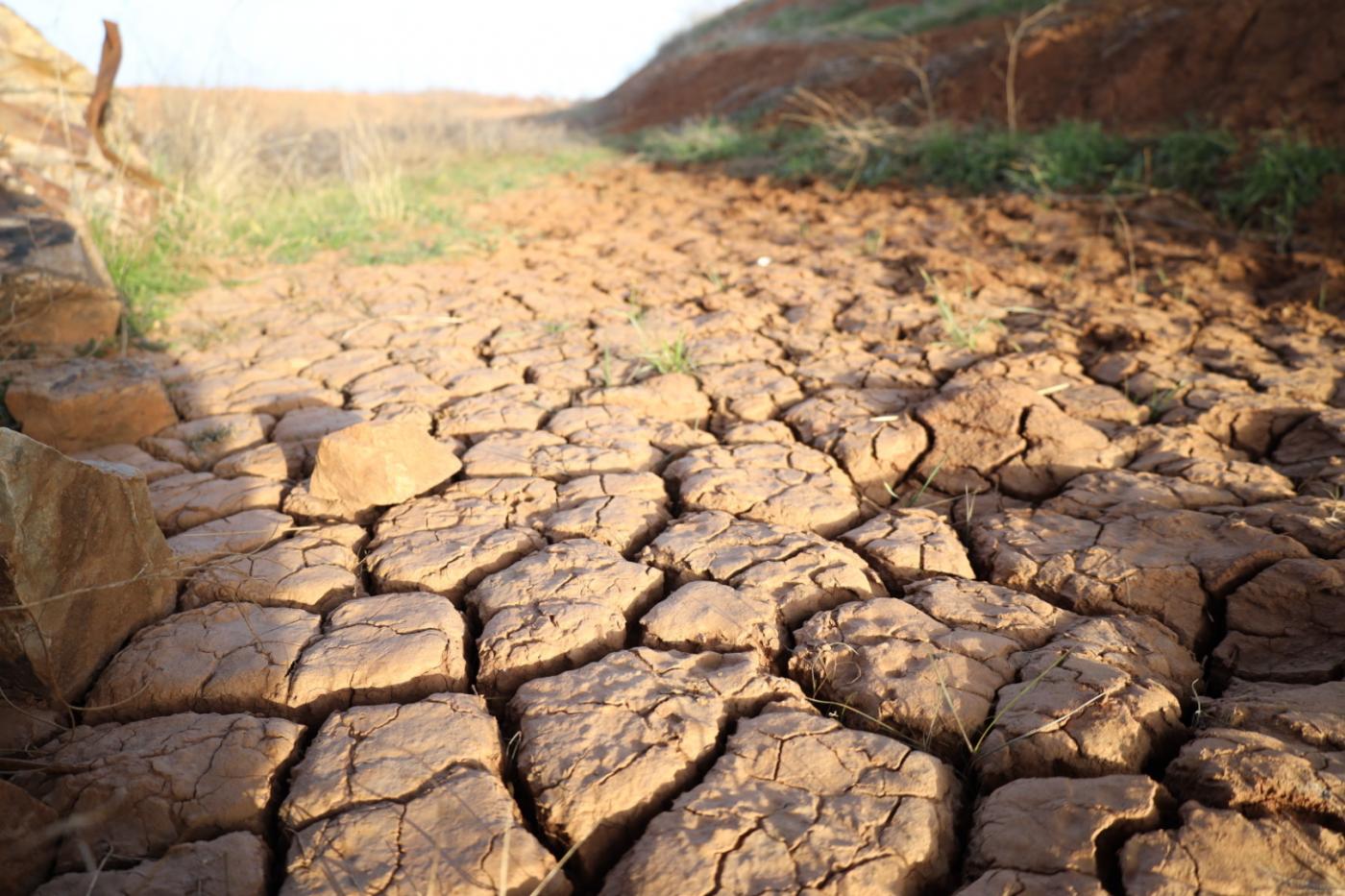 The Regional Minister of Agriculture, Fisheries, Water and Rural Development, Carmen Crespo, has asked the Ministry for an extraordinary line of aid to alleviate the impact of drought.

Crespo has participated today, telematically, in the Advisory Councils of Agricultural and Fisheries Policy for Community Affairs, where the councillors of the various autonomous communities have addressed with the minister issues such as the impact of drought, inflation and high production costs in the primary sector activities, as reported by the ministry in a note.

In the agricultural field, Crespo has claimed to the Ministry a new extraordinary package of measures aimed at alleviating the effects of drought that farmers and ranchers are suffering and has opted to activate aid from the new funds of the Common Agricultural Policy (CAP) that, "once well studied in Spain", are raised to the European Union an extraordinary line of aid ('measure 23') aimed specifically "to alleviate the effects of drought in the countryside of autonomous communities where the sector is encountering additional difficulties".

"It would be a solution for the whole of Spain", stressed Carmen Crespo, who recalled that in recent years lines of aid financed by Europe have been activated ('measure 21' and 'measure 22') whose proposals also came from Andalusia and from which all the autonomous communities have benefited.

The Regional Minister stressed the need to adopt new measures in addition to those agreed in March. By way of example, she referred to the State approving a reduction in taxes, a reduction in VAT on inputs and possible subsidies for energy and desalinated water.

Crespo also stated that, "in this particularly difficult situation, the dual electricity tariff for irrigators, who really need it, must be implemented". Precisely to support these last professionals in the field, the Minister has asked for "the help of the Ministry of Agriculture to respond to a serious problem that currently exists in the north of the province of Almeria, pending the Tajo-Segura water transfer, as well as Murcia and Valencia".

On the other hand, the head of Agriculture has asked for "sensitivity with stone fruit", whose early and small production in Andalusia means that "the limitations that are being proposed are not acceptable"; and has asked that the allegations presented by this Autonomous Community to the prohibition of agricultural burnings that the Waste Law contemplates be taken into consideration. In this respect, he pointed out that it is necessary to "continue fighting because, if not, the situation of many farms will be unviable".

In her speech at the meeting, Carmen Crespo also once again asked the State to demand an increase in Next Generation funds for hydraulic works to help alleviate the effects of the drought on the countryside. "Agriculture must have more funds for sustainable irrigation," said Crespo, for whom "this possibility is now on the table with the reprogramming of the Next Generation to respond to a fundamental issue in the fight against drought such as sustainable irrigation.

The head of Water regretted that the Guadalquivir Confederation, which is the responsibility of the State and occupies a large part of Andalusian territory, only has a drought decree with measures worth 9.6 million euros, which is "absolutely insufficient", and she called for an increase in these funds to provide possibilities for supply and irrigation in the area surrounding the Guadalquivir.

With regard to fishing, Carmen Crespo said she was "very concerned about the situation in which professional trawlers find themselves" due to the ban imposed by Europe on this activity in protected areas of the Atlantic, a measure which greatly affects vessels fishing in the Gulf of Cadiz, and specifically, it is estimated that this measure affects 600 crew members of 120 Andalusian vessels.

The Councillor regretted that this unilateral decision by the European Union has been taken "without taking into account the updated studies of the Gulf of Cadiz, as was the case in the Mediterranean". 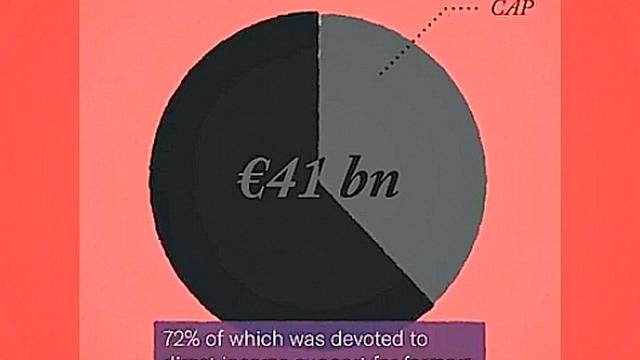 Read the post/thread at Defending-Gibraltar that contains this video: Water restrictions in Campo de Gibraltar from 18 April if no rain arrives https://defending-gibraltar.net/t/water-restrictions-in-campo-de-gibraltar-from-18-april-if-no-rain-arr…

Another part of the failed EU's
Communist "sustainable goals" that have not only failed, but caused tremendous damage in other countries in Africa and elsewhere with their far reaching arms.

A layer now added to the control grid is Nestles partnership with Ericsson and the 5G grid - IOT of things.
Starting in Latin America, and expanding from there. Nestles octopus arms, not only in the theft of water globally, but also poisoning everybody with the 5G +++ grid.

Ericsson’s latest 5G deployment at Nestle may be laying a foundation for the rapid growth of industry 4.0 across Latin America.

And their "smart water sloution" to spy on you, your home your town all meshed into one big "lockdown", when they are ready.

Take a closer look at the electric vehicle smart charging solution use case and the role of BSS.

With large parts of the world facing water scarcity, how to effectively optimize water distribution is of crucial importance. 5G and the internet of things (IoT)-based solutions along with specialized BSS capabilities can enable a water utility to set up an efficient multi-partner solution to help monitor, manage and monetize water distribution effectively.

The water challenge and need for rapid digitization of water utilities

Water is the most precious resource for humankind

[Then they should stop utilizing it for massive Data collection!]

Nestlé is sucking water from an Ontario watershed during drought conditions 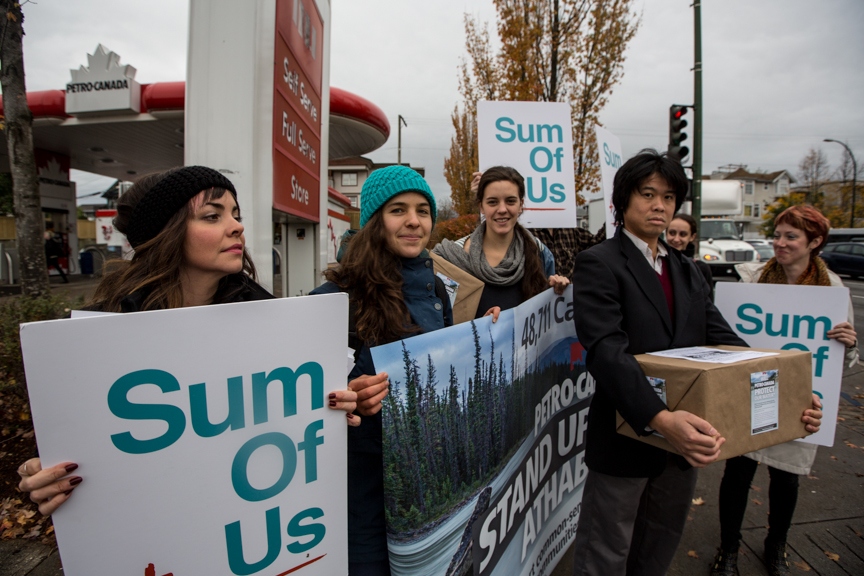 Nestlé is sucking water from an Ontario watershed during drought conditions

Update: Wellington Water Watchers, Ecojustice and the Council of Canadians are celebrating Nestlé Canada Inc.’s move to back down from a bottled water fight after the groups challenged Nestlé on its attempt to have drought restrictions dropped from...

Why This Fight Matters The Story of Stuff Project launched a campaign against Nestlé Waters in 2015 after learning that the world’s largest water bottling company had been taking water for years from public land in Southern California, without paying...

Take a closer look at the electric vehicle smart charging solution use case and the role of BSS.

The Secret Cost of Google's Data Centers: Billions of Gallons of Water to Cool Servers 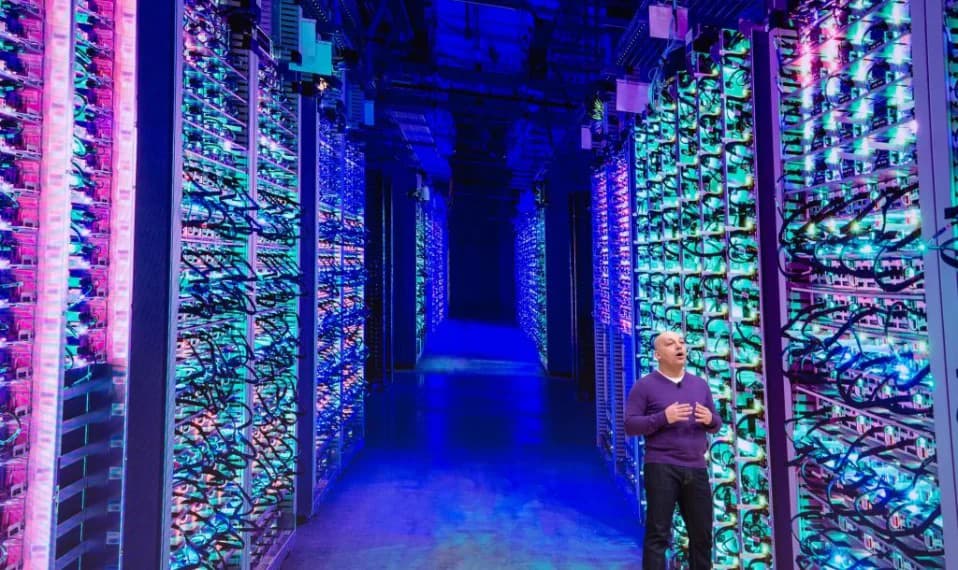 Alphabet’s Google is building more data centers and they think they have the right to steal your water. 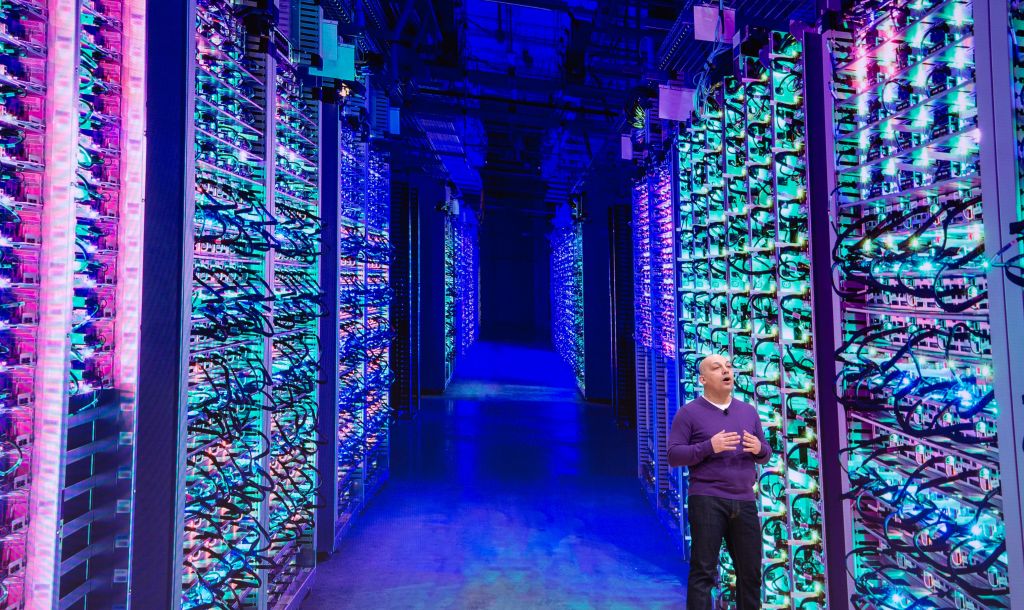 The Secret Cost of Google's Data Centers: Billions of Gallons of Water

In 2019 alone, Google requested, or was granted, more than 2.3 billion gallons of water for data centers in three different states

They also tell of the heat waves and fires breaking out due to climate change, but most of these fires are part of their programs.

Hi @NancyDrewberry THEY have given themselves immunity, with their "Burn Bosses, etc. THEY want to make home owners pay for "fire/proofing" their homes, and the damages caused by the government. Another SCHEME for transferring wealth. This is Universal, as many countries have adopted Floridas "Book of Burns". Including Andalucia Spain and a whole host of others. Florida is in the lead with prescribed fires [Rx], and unfortunately they are at the center of a global fire regime with far reac…

All part if the global agenda

And lets not leave out the weather manipulation they are capable of.

So its time to cut the head off the snake.

[image] Let’s put them out of their self-induced misery, and use the removal of their birthright to be our heads of state to really build back a better Britain – one that’s more democratic, fairer and more equal. It's time to get rid of the royal family. I’m not calling for a Bolshevik-style solution – no one wants to see Prince Charles in a basement in his night dress, but what’s needed is a real solution to the problem of the British class system. It cannot be solved or even seriously ch…

A reality-check for you all Replace the destructive policies

21 Apr 20 Here’s a reality-check for you all. The government has a MANDATE from YOU to install 5G and smart systems, because the people/you voted for them and their election-manifesto, and therefore they will just ignore and ride rough-shod over anyone who tries to stop them, UNLESS you have an irresistible force, immovable object/YOU to collectively stop them with, in sufficient numbers to succeed. Read their Manifestos: GSLP Liberals Manifesto 2019 and GSD Manifesto 2019. All the FaceBook p… 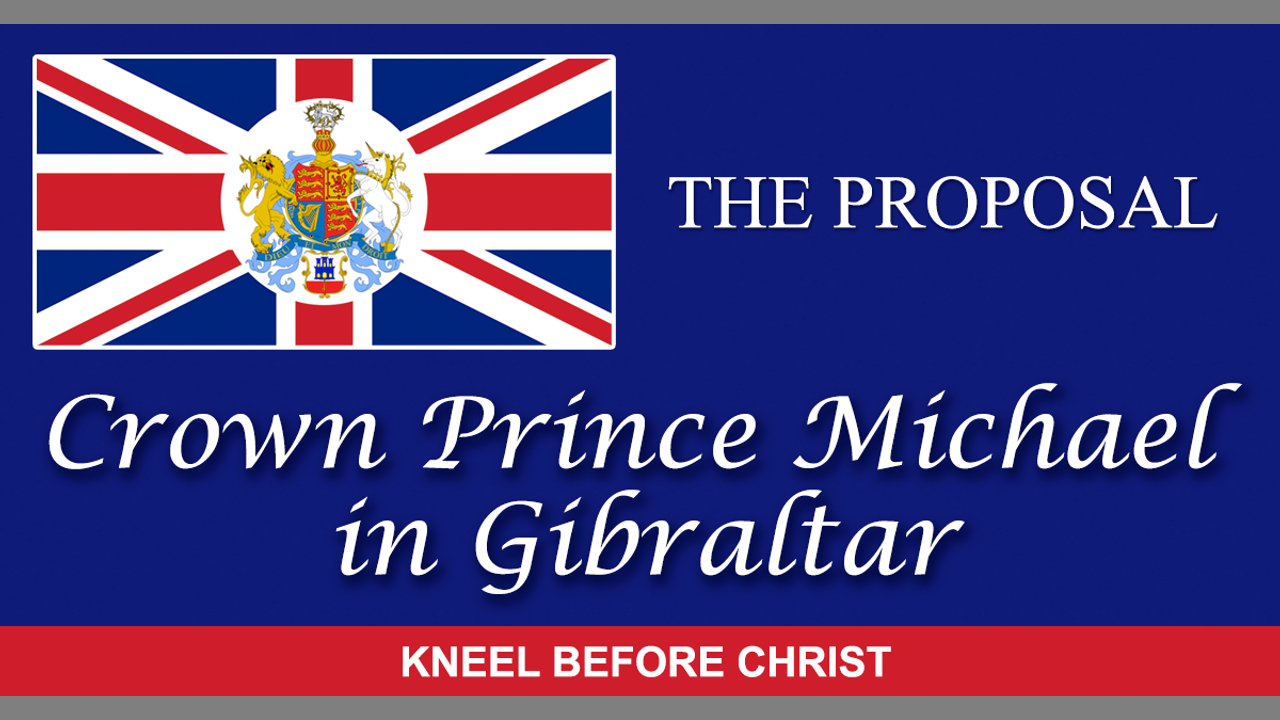