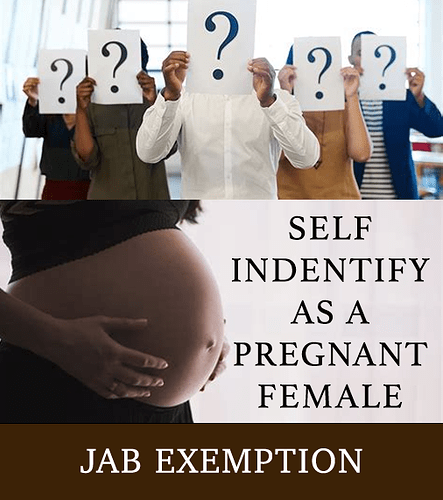 Remember when the powers that be warned that pregnant women should not get jabbed, because there was not enough information to prove it would be safe?

Then, remember how that all changed?

The powers that be quickly changed their official narrative. BUT that change was only a deception – designed to convince as many pregnant women as possible to "voluntarily" become part of the experimentation "on pregnant women."

The consequences of those decisions keep coming in -

The FACT is Pregnant Females are EXEMPT, even by their fraudulent "rules":

"You can also get a temporary exemption which will allow you to use the COVID Pass if you have a short-term medical condition or are pregnant and choose to take this option" – COVID-19 medical exemptions: proving you are unable to get vaccinated - GOV.UK

Because our politicans and LGBT+ groups have turned The West into a modern-day "Sodom and Gomorrah" where anything goes, it seems like we can turn their nonsense on them.

People can now self-identify to be a different gender or even race, because gender identity is all about how "you feel inside and how you express those feelings". In fact, people can even identify themselves as otherkin – https://www.christianpost.com/news/should-we-provide-litter-boxes-for-people-who-identify-as-cats.html

We don't have to consider biology – BECAUSE THEY DON'T. 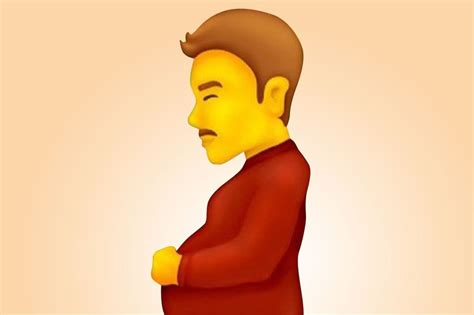 They have just recently announced the "pregnant male emoji" – and one reason they did it was to be "more inclusive" of how people identify themselves.

So if we say – "I self-identify as a pregnant female" – then according to their ill-logic, we are exempt from these poisonous jabs. Right? It doesn't even matter that a pregnancy ends, because as long as we self-indentify as pregnant, we'd be covered.

Just two examples of their NON-sense - 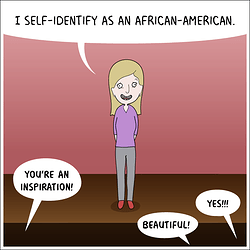 JAH has often called this planet an insane asylum. In fact he wrote about it in the little book The Way home or face The Fire:

12:33 It should not be too much of a surprise, to those of you who can see how crazy mankind is, to find-out that this planet is a maximum-security prison, for the criminally-insane. Some of you are less insane than others, but, unfortunately, the people who are the MOST insane, and who THINK
they are the most sane (classic symptoms of insanity), are those who are ruining things, for everyone else, by running and ruining the world for Satan, who, himself, is totally, criminally-insane. Satan is ruling the world, right-now, through those very people, who are in human governments and
religious-organizations (Ephesians 6:11-12)

Of course, this post was meant to poke fun at their ill-logic and nonsense. It is not meant for one to really play their gender-whatever identity game. It is just to show how those ruling are running the world for Satan.

We can self-identify as a lot of things, these might be more inline with the truth:

The fact is they deceive everyone into believing the jabs are mandatory, but they are not. Just because they are making life miserable for the unjabbed doesn't mean it's mandatory.

They have been trying for years to remove the religious exemption, but we will need to hold our ground, because they are getting very clever - more on that in my next post concerning exemptions - (update: now published Religious Exemptions To Jabs Under Fire – Stand Your Ground).