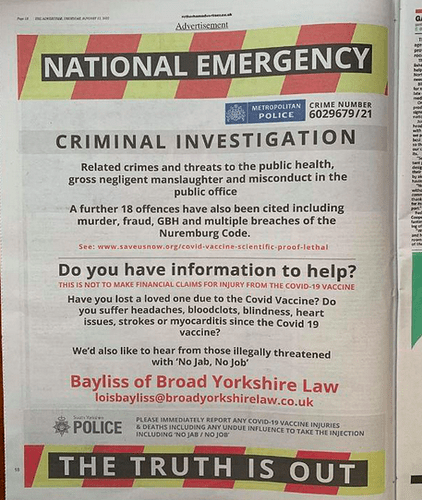 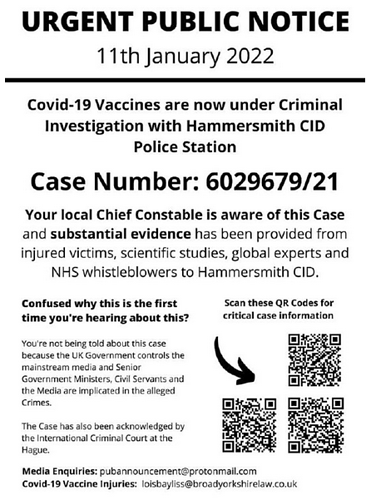 This is an open letter to you and for the attention of every man, woman and child in the U.K. and around the world.

One month on since the reporting of serious crimes and a crime number being issued, please answer and consider the following?

1, why haven’t The Metropolitan Police made contact with all U.K. Police forces to make them aware of the dangers of the vaccines? This is despite all Chief Constables being individually notified three weeks ago and Sadiq Khan The Mayor of London.

2, why haven’t The Metropolitan Police made an announcement to alert the public of the dangers of the vaccines?

3, why haven’t The Metropolitan Police and all U.K. Police forces advised all medical establishments to cease administering the vaccines immediately?

4, why haven’t The Metropolitan Police and all U.K. Police forces seized all vaccines from all establishments and taken them into the police’s secure detained property stores, considering they are weapons being used to cause mass harm, injury and death?

5, why are law abiding members of the public being forced to go to vaccination centres across the U.K. and demand they are closed down immediately with limited or no assistance from the Police?

6, why are some Police forces telling the public the crime number does not exist and the whole thing is a hoax?

Yet other Police forces are acknowledging the crime number is real and evidence is being collated and assessed by The Metropolitan Police.

7, the evidence (so far) submitted is vast, irrefutable and damning on a scale that is very disturbing. Why haven’t The Metropolitan Police made contact with any of the expert witnesses in order for them to provide their very credible evidence? They are being acknowledged by Superintendent Jon Simpson (the former assistant to Cressida Dick) and he in turn is forwarding all correspondence onto the investigating team. Yet limited contact is being made considering the irrefutable evidence they can provide.

8, since making the complaint on the 20th of December 2021 approximately one hundred and fifty more people have died unnecessarily as a result of the vaccines. Also in that time tens of thousands more people have suffered serious injury and harm.
This is unacceptable. This is the governments own yellow card reporting data and it’s believed to be under reported by at least ten times.

9, the evidence provided is more than enough to warrant an immediate cessation of the vaccines, but in any instance they should be paused while these assessments are made.
Common sense alone dictates this should be done at the very least.
Why has this not been done?

10, why haven’t you convened an urgent meeting between the informants and some of the medical and scientific experts, to discuss and guide the Police to the most pertinent evidence and how this can assist with the decision making processes.
Their expertise and knowledge base is key and it offers the best evidence to support all of the allegations.

11, why is there a total media and social media blackout pertaining to the criminal complaint and the investigation being carried out?

12, Constables of all rank and file swore an oath to protect the public from harm, injury and death.

As public servants it is your basic fundamental duty to do so without interference from any outside agency including government. You are impartial.

No man or woman, business or corporation private or public are above the law. We are all equal in the eyes of the law.

Not title, financial status or appointment of public office gives anyone special privileges or exemption from investigation, arrest or prosecution.

The actions or indeed inactions of every Constable have consequences for that individual officer.

The inactions so far by not protecting the public from harm is the individual responsibility of each of you and you are not protected by The Metropolitan Police or The Police Federation.

You must act to save lives straight away and any unlawful orders to the contrary from senior rank or government must be ignored and appropriately challenged.

The vaccines must be stopped immediately and the public must be notified of their dangers. The evidence is overwhelming. Not only are you Constables in possession of the evidence but Constables with families, friends and colleagues who are all seeing the devastation they are causing.

Surely you want to protect your loved ones also?

I implore you all individually and collectively and for the sake of humanity, with morality and decency, to stop this now, to protect all of the men, women and children not just here in the U.K. but around the world. If you fail to do so the public have every right in law to act to protect themselves and each other.

But this must be avoided at all cost.

Please, stand up and do the right thing now, stop this mass murder and harm and arrest those responsible. You’ve been sent more than enough evidence from very credible experts from all over the world, many of whom are offering their full support to this criminal investigation.

The evidence alone submitted by Lawyer Philip Hyland PJH Law and Dr Sam White is more than enough to arrest some of those responsible.

Our only motive is to save lives.

Surely that is yours too.

Doctors, Lawyers, Professors, Immunologists, Virologists, Scientists, data experts, Barristers, retired Police Constables, Teachers and members of the public should not be begging you to protect them from harm and for you to do your job. It is your sworn public and professional duty to do so.

We let them murder our elderly who were abandoned, frightened and alone. Are you really going to stand by and let them harm our children too? Because we will not be letting this happen.

In the name of god almighty and all that is true, decent and moral, work for the people who pay you to protect them.

We are not telling you how to do your job, we are demanding that you just do it.

Yours sincerely, hopefully and respectfully.

• Mayor Of London and All Chief Constables in England, Ireland, Scotland and Wales are now aware of the live criminal complaint/investigation with The Metropolitan Police ON the 16th of January 2022, retired Police Constable Mark Sexton recorded an update regarding the criminal case which is now a live criminal investigation.

Retired Police Constable Mark Sexton made a criminal complaint to Hammersmith police station on the 20th December 2021. The complaint of Gross Negligent

These are fascinating developments. The German case for The Hague - that also applies to neighboring countries - continues to be a long time coming. There is a more universal approach, i.e., not just directed at vaccinations. There is apparently a claim to carry out part of the preliminary investigation itself, so that it does not end up being carried out by German prosecutors and discontinued or delayed. German prosecutors are part of the executive branch and are bound by instructions. Can you believe that? One word from the Minister of Justice and evidence is destroyed and investigations are obstructed or stopped. There are thousands of criminal charges against the unspeakable ex-chancellor Merkel, which are simply ignored.

Perhaps a British-style approach would still be appropriate. Unfortunately, the few German lawyers critical of the measures focus only on challenging and denouncing the disproportionate Corona measures. While it would not be likely that the German government would be impressed by a complaint to the Criminal Court in The Hague, they would at least have to feel caught.

Can you believe that?

Yes.
Attorney Reiner Fuellmich has stated that the legal / court system in Germany is totally corrupted.

Absolutely right. But corrupt in two ways: First, the actors often do not act according to law and order, as one would expect in a banana republic. Second, Germany is not really a constitutional state, because there is no real separation of powers and no independent judiciary. 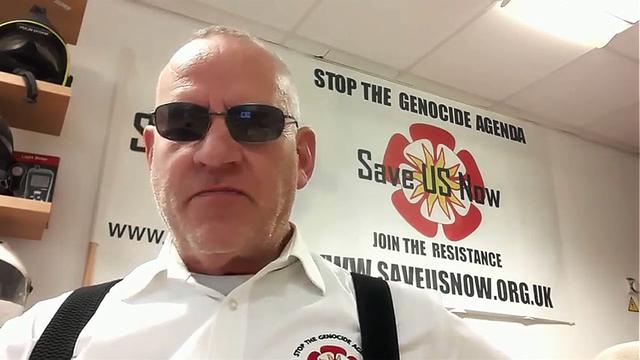 Share far and wide - Important information about taking action against the...

Mirror. Source MARK STEELE CHANNEL, [26.01.2022 10:15] [ Video ] SHARE FAR AND WIDE AS I AM BLOCKED ALL OVER - IMPORTANT INFORMATION ABOUT TAKING ACTION AGAINST THE CRIMES THAT ARE GOING ON https://www.saveusnow.org.uk/directors-of-public-health-cr…