ENOUGH IS ENOUGH announces a PUBLIC DEMONSTRATION on Monday 1st November at 5:30 p.m. from Casemates Square to show the Chief Minister and ministers our feelings about the unacceptable chaos in OUR home, OUR "services" and OUR streets!

Who Does Gibraltar Belong to? The Reality Will Probably Surprise You

1 November 2021 demonstration in Gibraltar against the GSLP Government.

This demonstration was much the same as the last one. Everyone walked from Casemates to No. 6 to hand Der Fuehrer Picardo a letter. The crowd chanted "da la cara" (show your face) to get him out. He came out accepted the letter and turned around and walked straight back in with his bodyguard at his side. He did not say anything this time. There was some disappointment to the crowd size. Bart put in his video there were 400; others think under 200.

Also to be noted is the fact that no member of either opposition party were present, regardless of the fact that they have also supposedly "called out" in the media the GSLP about some of the issues people were protesting about yesterday. Both were present at the last protest by the same group.

“Capital must protect itself in every possible manner by combination and legislation. Debts must be collected, bonds and mortgages must be foreclosed as rapidly as possible. When, through a process of law, the common people lose their homes they will become more docile and more easily governed through the influence of the strong arm of government, applied by a central power of wealth under control of leading financiers. This truth is well known among our principal men now engaged in forming an imperialism of Capital to govern the world. By dividing the voters through the political party system, we can get them to expend their energies in fighting over questions of no importance. Thus by discreet action we can secure for ourselves what has been so well planned and so successfully accomplished.” — Montagu Norman, governor of the Bank of England, 1920 – 1944 Reprinted in the Idaho Leader, USA, on August 26, 1924 and read twice into the Australian Federal Hansard by John Evans MP in 1926, and by MD Cowan MP, in the 1930 – 1931 session.

No matter what so-called “first minister” is at the helm of “government,” he is merely taking orders and must do as he is told.

“The real truth of the matter is, as you and I know, that a financial element in the large centers has owned the government of the U.S. since the days of Andrew Jackson.” – Franklin D. Roosevelt in a letter written Nov. 21, 1933 to Colonel E. Mandell House. 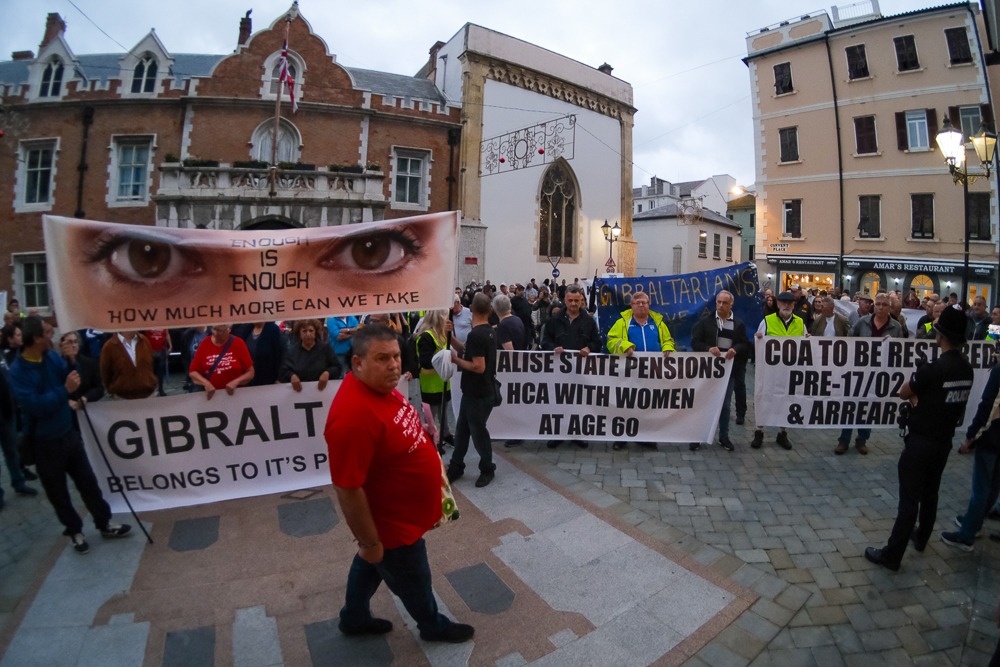 Protestors march to No.6 with long list of grievances

The weather did not dampen the spirits, voices or anger of the 250 people who took part in Monday evening’s demonstration led by a group calling itself ‘Enough is Enough’. Ahead of the march, the group issued a 40-point list of grievances ra...

The weather did not dampen the spirits, voices or anger of the 250 people who took part in Monday evening’s demonstration led by a group calling itself ‘Enough is Enough’.

Ahead of the march, the group issued a 40-point list of grievances ranging from concerns about healthcare, traffic, housing and Community Care, to Brexit, the provision of utilities, the pace and shape of development and everything in between.

Taken as a whole, it reflected deep unease with the management of Gibraltar’s affairs across all areas of community life.

It was about “putting the needs of the people of Gibraltar first and foremost”, the group said. 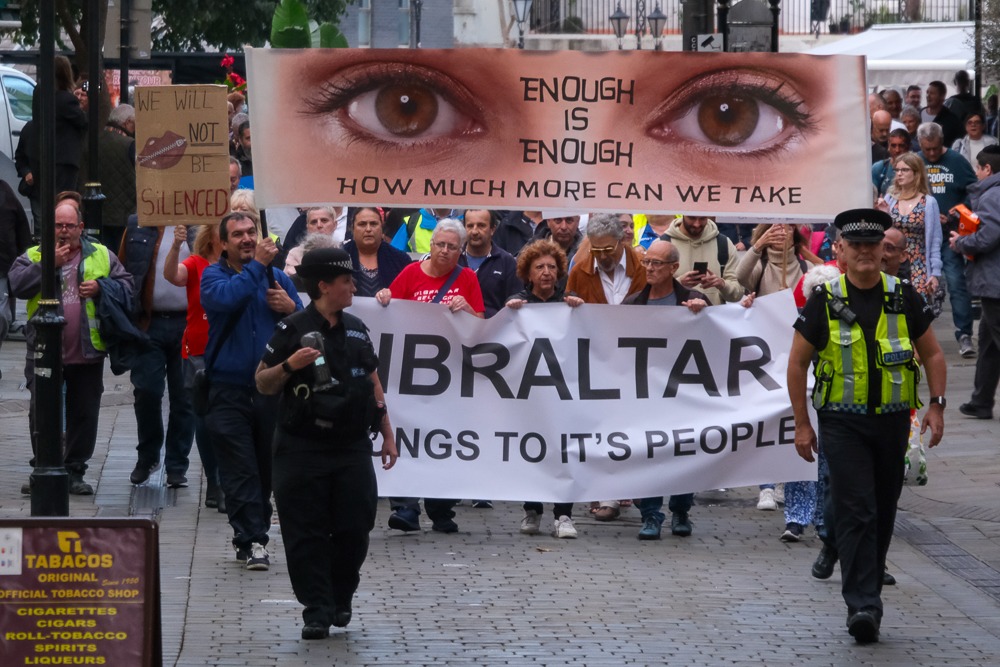 Marching behind banners highlighting their wide-ranging concerns, the protestors set off from Casemates at 6pm and moved along Main Street to No.6 Convent Place.

The Royal Gibraltar Police put the number of marchers at between 250 and 300, though the protestors themselves said it was closer to 500.

Within a few minutes of their arrival at No.6, Chief Minister Fabian Picardo and Deputy Chief Minister Dr Joseph Garcia came out to speak to the crowd.

They were greeted with persistent booing, air horns and whistles as the coordinator of Enough is Enough, James Parody, handed Mr Picardo a letter.

The Chief Minister received the letter, exchanged a few pleasantries and went back inside. 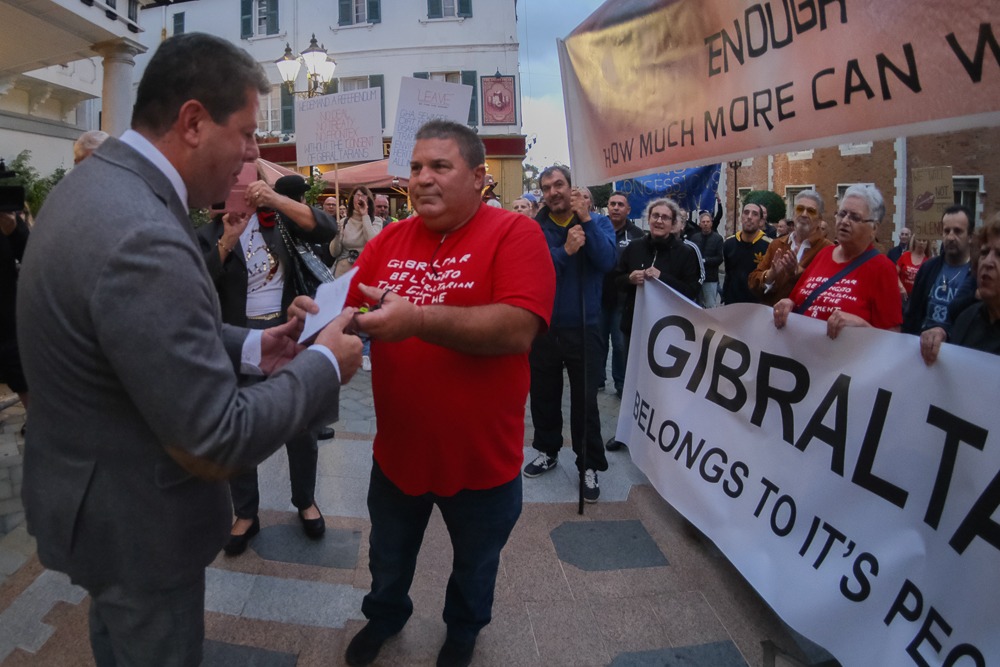 In the letter Mr Parody urged Mr Picardo to take steps to change the way the Government was handling many issues.

“The list is endless from the chaos at the GHA, equality of Community Care, mental health, disability rights, lack of youth training and apprenticeships, the housing saga, the ex-Commissioner forced [into] retirement, the dog park/beach, the traffic and parking fiasco not forgetting the privatisation of certain roads and land as Gibraltar belongs to the people of Gibraltar and any final deal on GIBEXIT should be on a level playing field,” the letter stated.

Noting he was aware that addressing these issues would take time, Mr Parody asked that as an act of good faith the GHA should set up a free doctor appointment telephone number.

He also urged Mr Picardo to state publicly that if any UK/EU treaty on Gibraltar was not ratified unanimously by the Gibraltar Parliament, it would be put it to a referendum of the people of Gibraltar to decide.

Outside No.6 Convent Place, Mr Parody told the crowd: “I believe that a no deal is better than a bad deal.”

“We have to wait to read the deal. I am sure if we don’t like it we will be out on the streets again.”

“The moment the deal is out we will be out again on the streets but this time if it is a bad deal we will be asking for a referendum.” 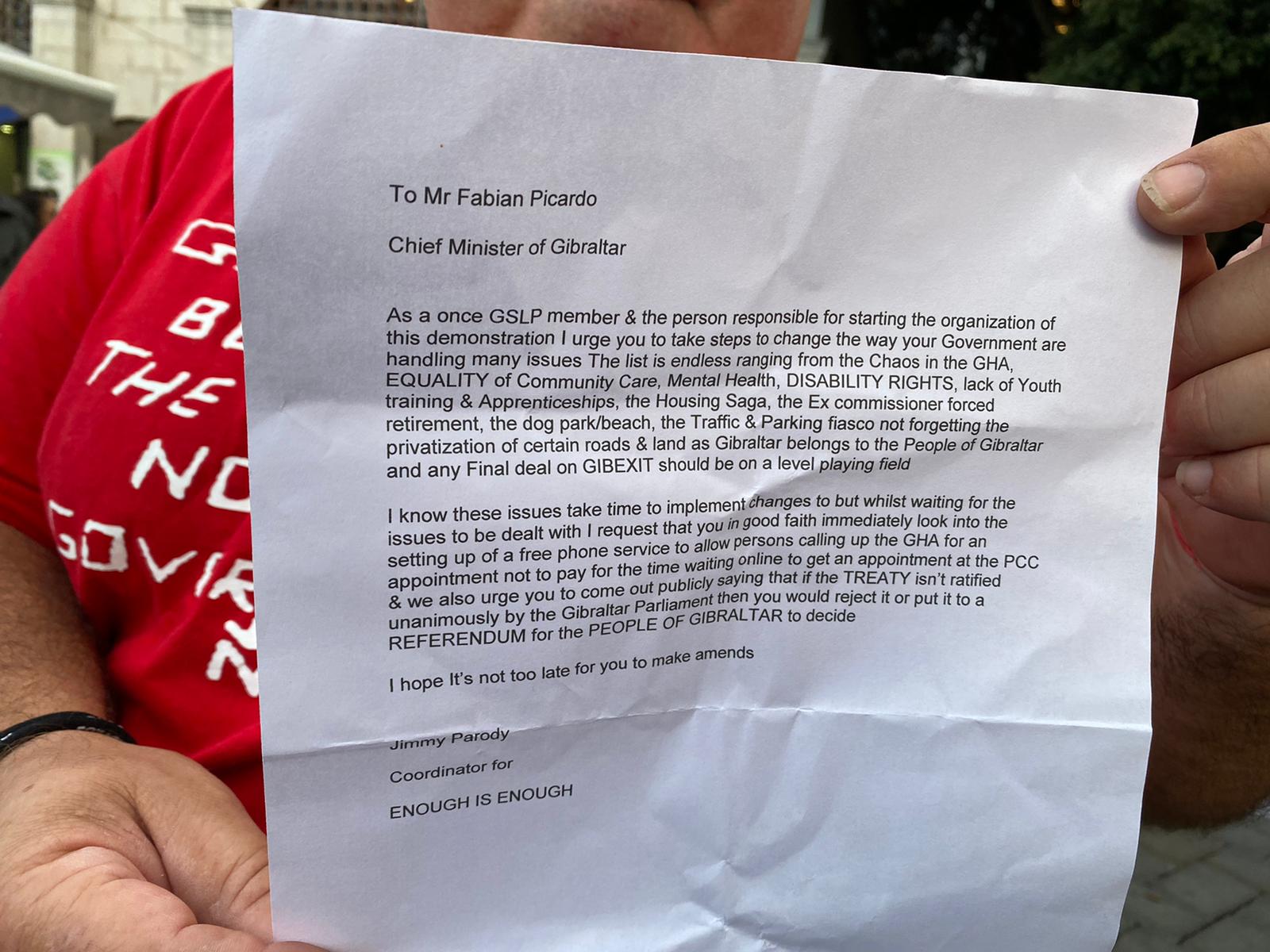 Other points raised outside No.6 related to the lack of support for the demonstration from other politicians in Gibraltar, aside from the GSD’s Edwin Reyes who took part in the march.

Mr Parody also believed that many other people backed the group’s aims but were “secret supporters” because they were scared to speak out.

“But you my fellow Gibraltarians have shown that you are not scared and I thank you for that because this concerns our future and the future of British Gibraltar,” he told those who had participated in the demonstration.

Mr Parody also told the crowd that Monday’s demonstration was the first of many to come before the next two years are up.

Last night the Chief Minister said people in Gibraltar had the democratic right to demonstrate when they felt it was appropriate, adding that he had welcomed the marchers and received their communication to him.

But he repeated his government’s position that there was no need for a referendum on the potential treaty being negotiated with the EU.

“We do not consider that an agreement on immigration and potentially on the movement of goods is something that has to go to a referendum,” he told GBC.

“Gibraltar belongs to the people of Gibraltar…who will be the ones who decide Gibraltar’s political future now and forever.” The Chief Minister Fabian Picardo said the right to demonstrate is sacred, as he received a letter from protestors outside Number Six Convent Place.

However, he rejected calls for a referendum on the Treaty being negotiated between the UK and the EU on Gibraltar. 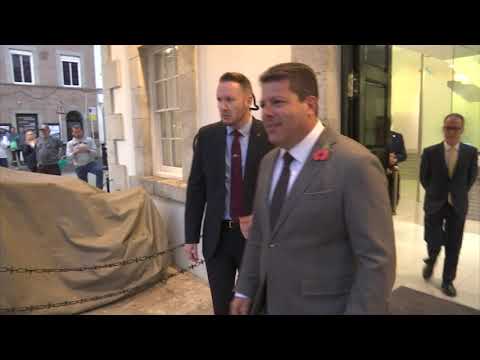 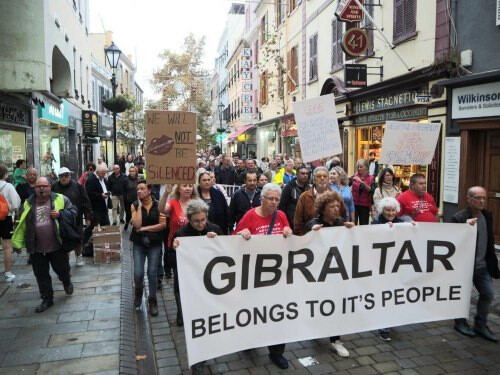 The cries from hundreds of angry protesters unhappy with Gibrexit negotiations and a wide-ranging set of local issues were significantly diffused on Monday evening by Chief Minister Fabian Picardo.

Tensions began to flare outside Number Six when it seemed as though Picardo would deny meeting the dissidents face to face and rather remain protected inside the Gibraltar Government headquarters.

The impassioned figurehead leading the march that began in Casemates seemed visibly nervous when passing through the columns of Number Six bordered by several RGP police (some of whom were armed). James Parody was inside for less than a minute before he exited and grabbed the megaphone to announce the Chief Minister’s intention to receive the letter.

From Your Gibraltar TV - 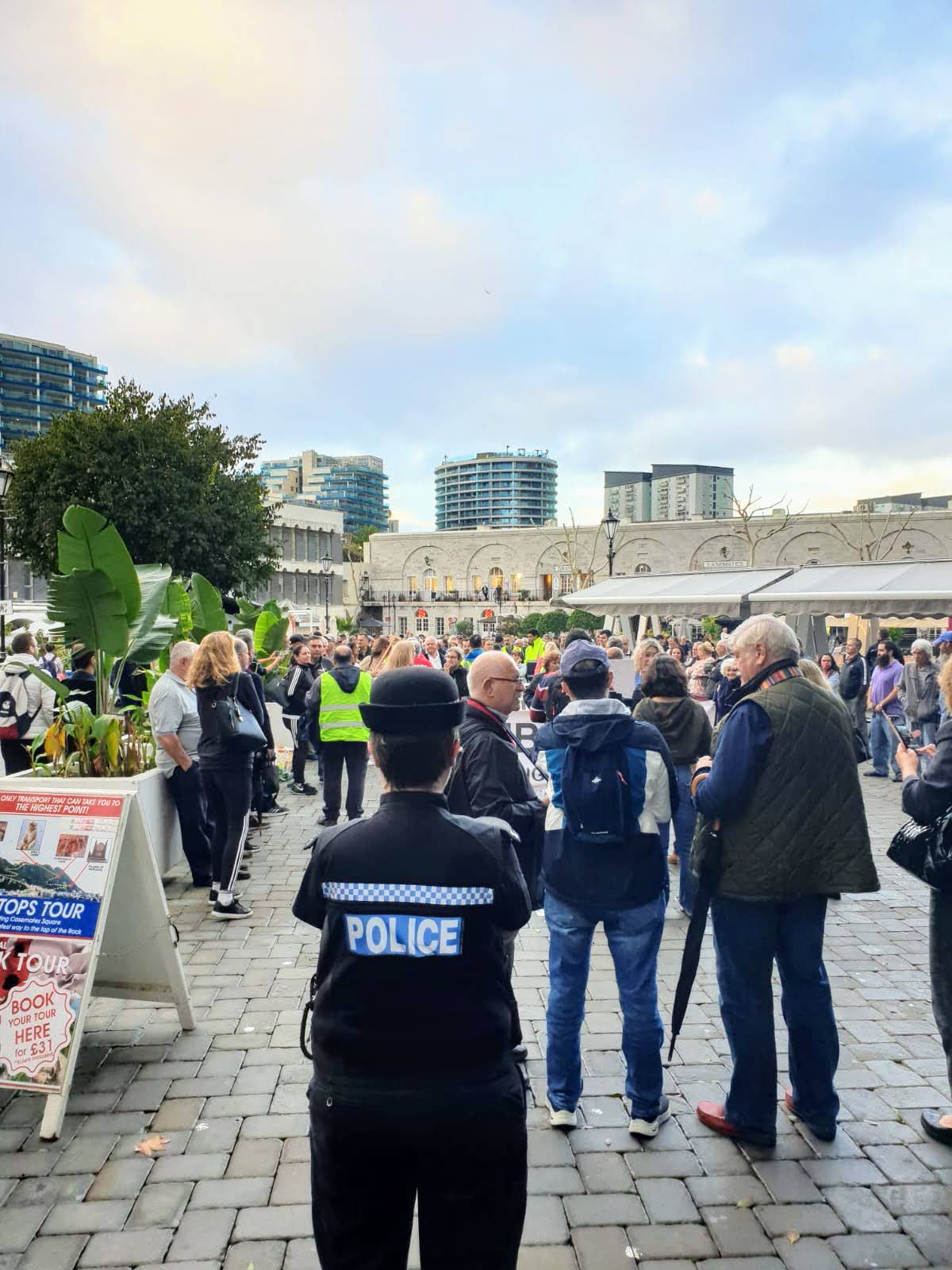 RGP Thanks ‘Enough is Enough’ Demonstrators And Organisers For Coopera

The RGP has thanked everyone who took part in yesterday’s ‘Enough is Enough’ demonstration, particularly the organisers, for their “cooperation and their assistance” with the policing operation. As a result of this cooperation, there was minimal...

The remainder of the Panorama article above. Continues from, Heated Standoff 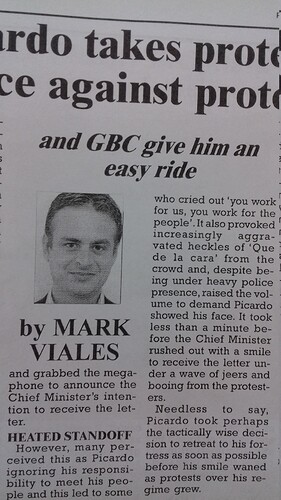 Continues from, Parody then 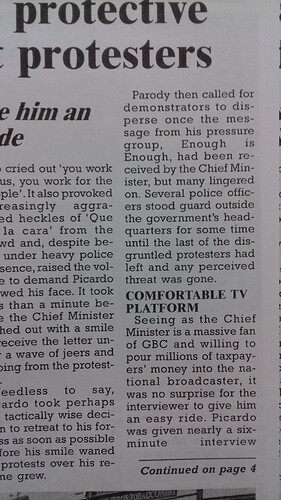 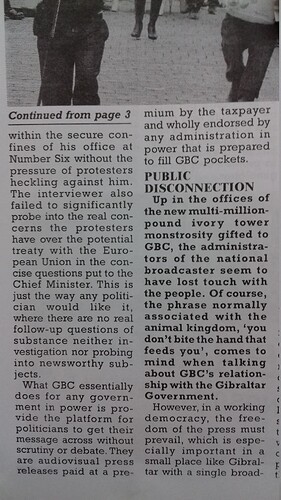 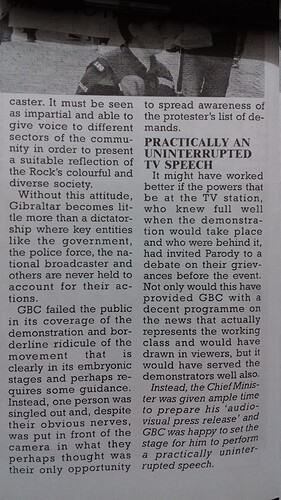 Here is Robert Vasquez take on the Nov 1 protest -

DEMONSTRATION AGAINST EVERYTHING: PROTEST ABOUT NOTHING

DEMONSTRATION AGAINST EVERYTHING: PROTEST ABOUT NOTHING

Today’s “Enough is Enough” demonstration is against everything, so it becomes a protest about nothing. Although one wishes it the best, that organisational failure is obvious. Having such a wide-ra…