In what should be HEADLINE news coverage in every single major news organization across the globe, the Independent publication "Off-Guardian," which describes their organization as: "Unlike the Guardian we are NOT funded by Bill & Melinda Gates,...

ER Editor: We’re doing a two-for-one, with GreatGameIndia‘s short report from yesterday, Nov. 18, 2020 and the more fulsome report from Lockdown Sceptics below that from Nov.16. . In a breakdown of the Portuguese appeal [...]

“It is a great tribute to the integrity of the Portuguese legal system that the Court seems to understand in considerable detail the shortcomings of the PCR test as a diagnostic tool.” 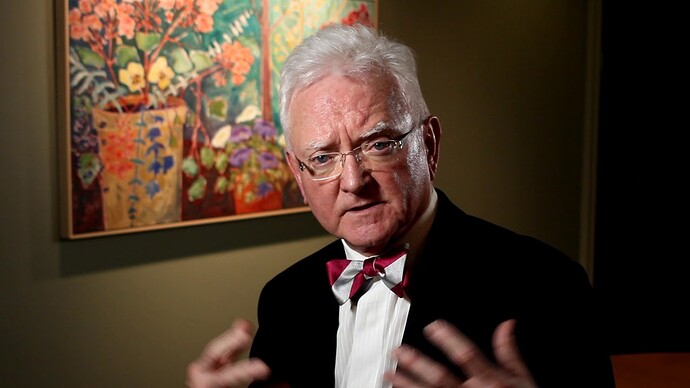 "The scale of the response that you are undertaking with no evidence for it is utterly ridiculous given the consequences of acting in a way that you’re proposing."

Listen to his interview from Nov. 13, 2020, or read the transcript at the above link.

He slammed the Canadian government’s coronavirus response and blamed politicians and media for generating false fear.

"The scale of the response that you are undertaking with no evidence for it is utterly ridiculous given the consequences of acting in a way that you’re proposing. All kinds of suicides, business closures, funerals, weddings etc. It’s simply outrageous!"

Hodkinson said every business and public place should be "open tomorrow," as stated in the "Great Barrington Declaration (see below)," a petition launched by Stanford, Harvard and Oxford epidemiologists arguing for not restricting the healthy while protecting the vulnerable.

About HODKINSON -
• He is CEO of a biotech company, Western Medical Assessments, which manufactures COVID tests.
• He holds general medical degrees from Cambridge University in the UK; became a Royal College certified pathologist in Canada (FRCPC)
• President of the Alberta Society of Laboratory Physicians and Chairman of a Royal College of Physicians and Surgeons committee in Ottawa.
• The Doctor was also a pathologist with the Medical Examiner’s Office in Edmonton determining the cause of death.

Great Barrington Declaration - As infectious disease epidemiologists and public health scientists we have grave concerns about the damaging physical and mental health impacts of the prevailing COVID-19 policies, and recommend an approach we call Focused Protection. - https://gbdeclaration.org/

A global team of experts has found 10 FATAL FLAWS in the main test for Covid and is demanding it’s urgently axed. As they should 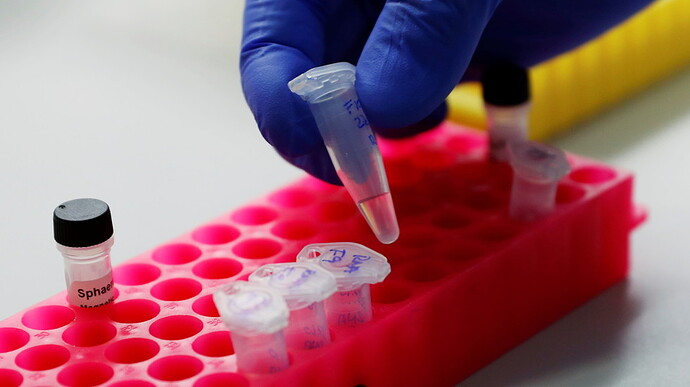 A global team of experts has found 10 FATAL FLAWS in the main test for Covid...

A peer review of the paper on which most Covid testing is based has comprehensively debunked the science behind it, finding major flaws. They conclude it’s utterly unsuitable as a means for diagnosis – and the fall-out is immense.

By Peter Andrews, Irish science journalist and writer based in London. He has a background in the life sciences, and graduated from the University of Glasgow with a degree in genetics

A peer review of the paper on which most Covid testing is based has comprehensively debunked the science behind it, finding major flaws. They conclude it’s utterly unsuitable as a means for diagnosis – and the fall-out is immense.
Last week, I reported on a landmark ruling from Portugal, where a court had ruled against a governmental health authority that had illegally confined four people to a hotel this summer. They had done so because one of the people had tested positive for Covid in a polymerase chain reaction (PCR) test – but the court had found the test fundamentally flawed and basically inadmissible.

Now the PCR testing supremacy under which we all now live has received another crushing blow. A peer review from a group of 22 international experts has found 10 “major flaws” in the main protocol for such tests. The report systematically dismantles the original study, called the Corman-Drosten paper, which described a protocol for applying the PCR technique to detecting Covid.

The Corman-Drosten paper was published on January, 23, 2020, just a day after being submitted, which would make any peer review process that took place possibly the shortest in history. What is important about it is that the protocol it describes is used in around 70 percent of Covid kits worldwide. It’s cheap, fast – and absolutely useless. 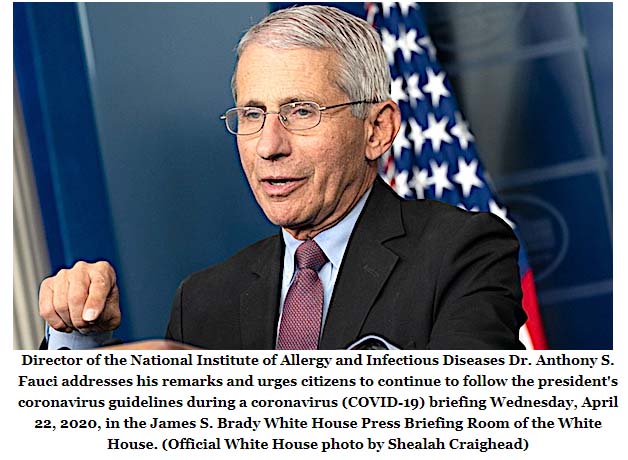 Dr. Anthony Fauci admitted in a newly resurfaced video that the widely used PCR tests pick up harmless fragments of the coronarvirus, resulting in many false-positive cases that result in overstating the threat. Fauci, the director of the National... 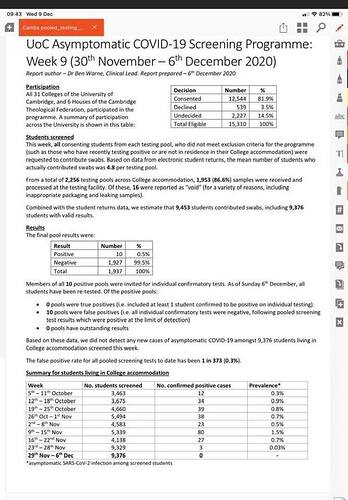 Bombshell Cambridge Documents: Of All Positive COVID Tests Of 9,000+...

People of the world, you are being deceived!  It’s not like we and others haven’t tried to warn, but the powers that be seem to want to silence the truth and give voice to the lies.  Well, the documents don’t lie.  Cambridge University...

WHO Finally Admits COVID19 PCR Test Has a ‘Problem’

In a statement released on December 14, 2020 the World Health Organization finally owned up to what 100,000’s of doctors and medical professionals have been saying for months: the PCR test used to diagnose COVID-19 is a hit and miss process with way too many false positives.

This [WHO-admitted “Problem”](https://www.who.int/news/item/14-12-2020-who-information-notice-for-ivd-users) comes in the wake of international lawsuits exposing the incompetence and malfeasance of public health officials and policymakers for reliance on a diagnostic test not fit for purpose.

This insanity of testing anyone and everyone, even without symptoms has been an unmitigated global public health scandal and must be stopped. All officials in high places complicit in this crime must be prosecuted.

PCR Tests: This simple explanation shows why all the False Positives

PCR Tests.. This simple explanation shows why all the False Positives

Share this with everyone. People need to understand how the PCR test works. There needs to be standardisation of the PCR test. Question: How many cycles do they run to "Prove" the vaccine is effective? Less than 20? Yet run it 40 times to search...

The FDA announced today that the CDC PCR test for Covid19 has failed its full review.

Its Emergency Use Authorization has been REVOKED. 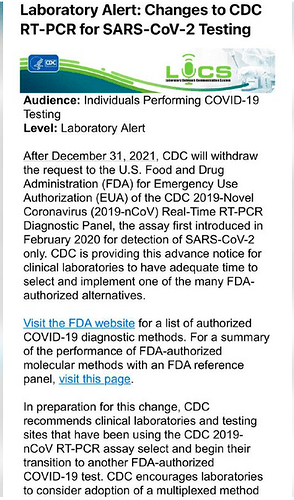 The FDA announced today that the CDC PCR test for COVID-19 has failed its full review. Its Emergency Use Authorization has been REVOKED. It is a Class I recall. The most serious type of recall. Too many false POSITIVES! This is the test that...

It is a Class 1 Recall. The more serious type of recall.

Too many false POSITIVES!

This is the test that started the pandemic.

The test used in all the nursing homes in Washington and NY.

CDC/FDA confess: they had no virus when they concocted the test for the virus

...Translation: Each of the 59 different PCR tests for SARS-CoV-2 told different lies and concocted different fabrications about the genetic makeup of the virus—the virus we didn’t have. Obviously, then, these tests would give unreliable results.

BUT, don’t worry, be happy, because NOW, the CDC and the FDA say, they really do have actual virus samples of SARS-CoV-2 from patients; they have better targets for the PCR test, and labs should start gearing up for the new and improved tests.

In other words, they were lying THEN, but they’re not lying NOW. They were “contriving,” but now they’re telling the truth.

If you believe that, I have Fountain of Youth water for sale, extracted from the lead-contaminated system of Flint, Michigan.

Here, once again, I report virology’s version of “we isolated the virus”:

They have a soup they make in their labs.

This soup contains human and monkey cells, toxic chemicals and drugs, and all sorts of other random genetic material. Because the cells start to die, the researchers ASSUME a bit of mucus from a patient they dropped in the soup is doing the killing, and THE VIRUS must be the killer agent in the mucus.

This assumption is entirely unwarranted. The drugs and chemicals could be doing the cell-killing, and the researchers are also starving the cells of vital nutrients.

There is no proof that SARS-CoV-2 is in the soup, or that it is doing the cell-killing, or that it exists.

Yet the researchers call cell-death “isolation of the virus.”

To say this is a non-sequitur is a vast understatement. In their universe, “We have the virus buried in a soup in a dish in the lab” equals, “We’ve separated the virus from all surrounding material.”

Virology equals “how to spread bullshit for a living and scare the world.” Other than that, it’s perfect.

DR. TOM COWAN: THE PCR TESTS ARE BEING REPLACED WITH SOMETHING EVEN WORSE! (4)

In the FIRST 20 MINUTES of this video Tom Cowan explains why the PCR tests are total BS and the plan to replace them with something even WORSE! “There are no ‘False Positives’ and/or ‘False Negatives’ – the entire basis of the tests is false.” After 20 minutes, Cowan answers questions submitted to his weekly Q&A 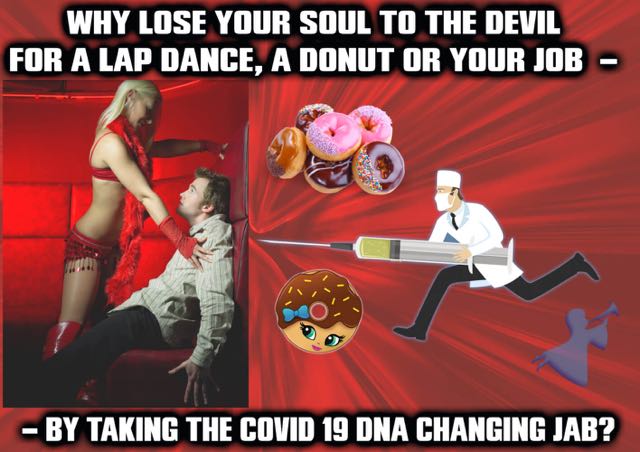 SKYNET (AI) IS NOW RUNNING THE PLANDEMIC - DID YOU KNOW AI AND ROBOTS CAN DO THIS?