2 Children DIE From Same School Within A Week 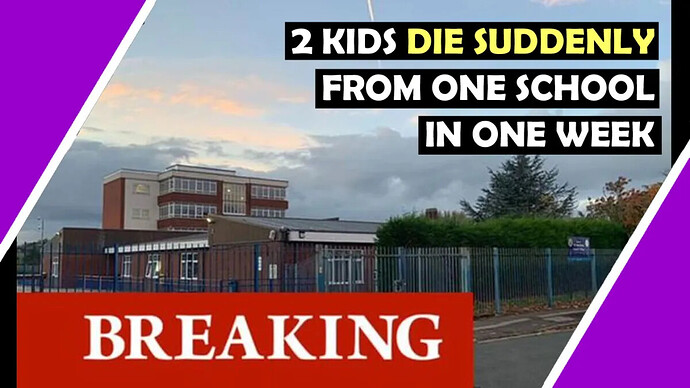 This article is a follow-up about the two children mentioned above...

A Catholic school in the archdiocese of Birmingham is refusing to reveal if the deaths of two of its pupils is related to the COVID-19 jab administered in a mass-vaccination drive targeted at teenagers. A source close to the school told Church Militant Habib died of a heart attack while Towers suffered a fatal brain tumor. Both conditions have been linked to the jab, with myocarditis — or heart inflammation — occurring in about 1 per 5,000 cases of vaccinated boys ages 12–15.

"They do not respond because they are complicit. This is depopulation on a global scale."

Habib and Towers died over the half-term holidays after a mass-vaccination campaign at the Shelton Primary Care Centre on Aug. 26 run by Britain's National Health Service (NHS).

Scores of youngsters lined up to receive the Pfizer jab including 17-year-old Sayen, a pupil at St. John Fisher Catholic College. Sayen's mother Amanda Masterson told media she was responding to "a text message from Grab-a-Jab" advertising "a walk-in clinic today."

Read the rest of this informative article.

More at dying around the world too:

GERMANY – A 12-year-old girl from the district of Cuxhaven has died two days after receiving her second Pfizer COVID-19 vaccine. Initial evidence suggests that there is a causal relationship with the vaccination.

The district had decided to make the case public after rumors surfaced on social media. The news comes just as the US has started vaccinating 5-11 year olds with the Pfizer vaccine.

The Cuxhaven health department had ordered an autopsy which has already taken place. According to the preliminary autopsy report, done by experts from the Institute of Forensic Medicine at the University Medical Center Hamburg-Eppendorf, it was concluded that it is likely that her sudden death was due to the vaccine.

PHOTHARAM, RATCHABURI – A 12-year-old girl in Thailand is fighting for her life in ICU after suffering heart complications caused by the Pfizer COVID-19 vaccine.