Whistleblower: If I had a magic wand, it would just stop. It would stop now, before we hurt anybody else. 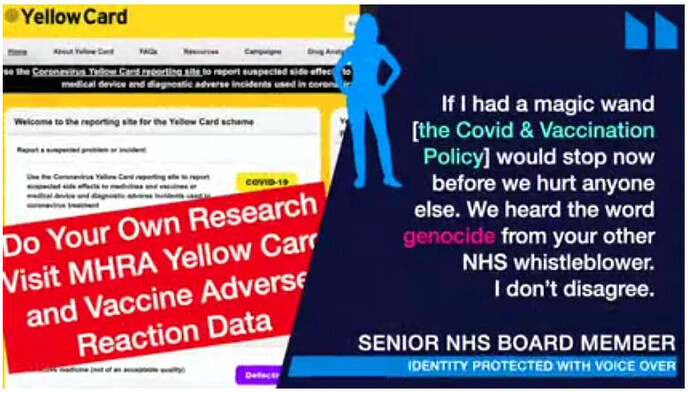 The senior NHS Board Member warns that the government is now controlling the NHS, and it is the government that is actually dictating what the NHS should do during Covid emergency measures.

She states that the result of the government's enforced Covid and Vaccination Policies can be described as genocide. Government messaging to her senior NHS colleagues is removing their capacity for rational thought, and they are effectively being mind controlled to implement policies which in more rational moments, they would challenge as wrong. Fear prevails, and she and her board colleagues are being expected to toe an unwritten policy line, set predominently in conference calls with no written record. She warns that if her privately troubled colleagues do not speak out, "your children will be next".

Brian Gerrish: ... And how do they get told what to do? Presumably, the policy comes in from the Government, and who does that go to? Does it go to the Chief Executives?

Whistleblower: Yes, and the Director of Public Safety or equivalent.

Whistleblower:... I think the key ones are lack of true informed consent, lack of a balanced risk-versus-benefit ratio being given to people. I think people are told that their adverse events are “normal”. I know that the Yellow Card reporting system is not reflective of the amount of adverse events that are actually happening...

And I think the long-term safety effects of these injections is still not known, yet we can see that the short-term impact is huge. And we’re now moving into a territory where we are going into healthy, younger, fertile individuals, and — God forbid — children.

The video and transcript are included at the UK Column link.