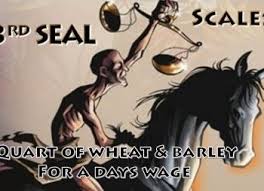 "And I beheld, and lo a black horse; and he that sat on him had a pair of balances (weighing-scales) in his hand."

When a corporate financial news source features an interview on their homepage from a financial investment CEO who says "I recommend prayer," it is time to sit up and pay attention to what may be about to happen.

The Bank of England, and Credit Suisse, as well as many other banks worldwide are on the verge of collapse.

The rich rulers of the world, who profit off of
unfair trading - driving entire nations into poverty [banks], have dropped the snowball down the mountain, which will grow into an avalanche the likes of which the world has never seen.

Some headlines this week around the globe:

Meanwhile, Spain’s socialist-led government agreed a temporary wealth tax to fund its efforts to fight the crisis. People with a fortune of more than €3m would be taxed at 1.7pc, rising to a rate of 3.5pc for those with more than €10m.

The darkening economic outlook and the sliding value of investments are the major threats to the eurozone financial system.

The regulator also sounded the alarm on rising mortgage rates threatening the housing market and the growing threat of cyber attacks on banks in the wake of Russia’s invasion of Ukraine.

The International Monetary Fund (IMF) urged the British government to “re-evaluate” its fiscal program and suggested that the new policy could intensify inflation.
So far, the government has been publicly unrepentant. As for the BOE, if investors start to believe that it will fund future government deficits, then the decision to purchase bonds could ultimately backfire, leading to renewed crisis. 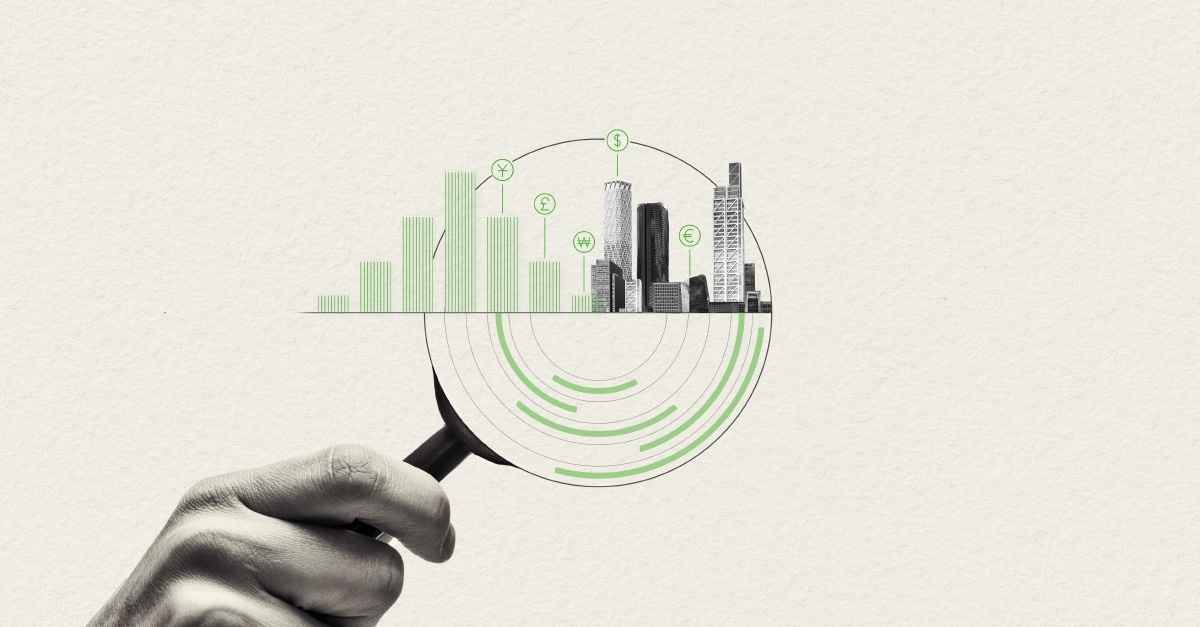 What’s happening this week in economics?

In our weekly update, Deloitte’s team of economists examines news and trends from around the world.

Inflation continues to accelerate in Europe

Inflation in the 19-member Eurozone continues to accelerate, largely due to the energy crisis. In September, consumer prices were up 10% from a year earlier (the first double-digit increase ever) and were up 1.2% from the previous month. Energy, and to a lesser extent food, played the dominant role in driving inflation.

Energy, and to a lesser extent food, played the dominant role in driving inflation. Energy prices were up 40.8% from a year earlier and up 3% from the previous month.

The inflation is mostly being driven by the political tug of war between Russia and the EU regarding the flow of natural gas.

"The potential impact of the current uncertain environment on the banking sector requires extreme caution. Banks will have to increase their provisions to cover potential losses," De Cos told a financial event in Madrid.

Spanish households are among the most exposed to a rise in interest rates as around three quarters of their outstanding mortgage loans are tied to variable rates.
Spanish banks need to boost provisions amid slowdown, De Cos says By Reuters

Europe’s fiscal discussions heat up ahead of cold winter

Former Bank of England Governor Mark Carney said
The main threat he identified was the immediate need to safeguard government bonds and pension funds from being “unable to make short-term obligations… that would cascade through financial markets.”

Former Bank of England Deputy Governor Sir Charlie Bean warned, “Frankly, the only way you can really deal with this is with a very fundamental rethinking of the boundaries of the state…

How to Turn the Tables on Tyrants Waging the Economic War

The Federal Reserve has ordered another 'super-sized interest hike' in what appears to be a hopeless effort to contain runaway inflation.

The Federal Reserve recently ordered another “super-sized interest hike” — the fifth rate hike this year — in what appears to be a hopeless effort to contain runaway inflation.

How to Turn the Tables on Tyrants Waging the Economic War

"During banking crises, you won’t have full access to your deposits in the bank. As a result, electronic payments such as bank cards may become useless. In the extreme case, your deposits could be used to recapitalize ailing banks in a process called 'bail-in.'"

People have already begun to report banks declining withdrawls from theirown personal and business accounts, as google, youtube and the gatekeepers have "disappeared" many of these videos.

The Prophecies warn of what is going to happen to the rich rulers of the Earth, and the Churches, who have worked with the rich to keep the masses in the dark; down and poor , by helping the rich to hide God's PERFECT Laws and substitute the rich people's oppressive and illegal laws.

This world is run by a small group of EXTREMELY rich jews who are known as "The Hidden Hand ". They say they are Jews and are NOT . They are the "synagogue of Satan " (Rev. 3 v 9).

These same people had already been previously condemned as traitors by God through Jeremiah in the third chapter of Jeremiah - note well verses 9-11 - "Treacherous Judah ".

The Four Horsemen of The Apocalypse Released: 5 November 2011 With no mercy for those who've shown none to others, Muad’Dib exposes the New World Order, Nazi, War-Criminal Banksters, and their war-criminal puppet politicians – The “Masters of War” as Bob Dylan called them in his 1960s...

[image] The United Kingdom-based Telegraph media outlet is reporting that the escalating global food crisis is an inside job perpetrated not by Russia but by corrupt Western powers. The UK is essentially the ringleader, the Telegraph claims, along with the United States. Both of these globalist-controlled countries want the world to believe that Vladimir Putin is somehow holding the world’s food trade hostage when nothing could be further from the truth. We are constantly told by Western p…

After the pound hits a record low and the Bank of England intervened to the tune of £65 billion, Liz Truss insists ‘this is the right plan’ 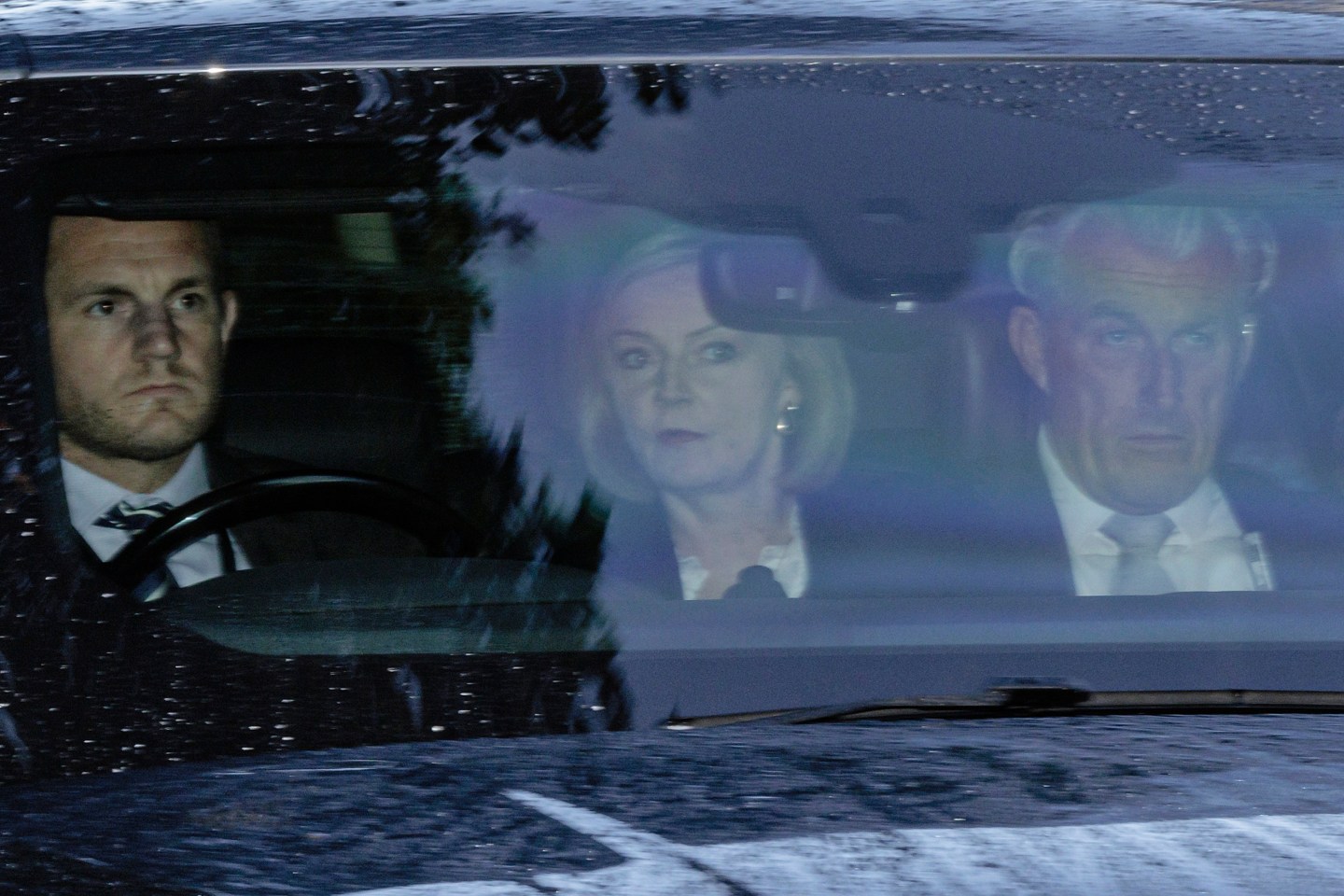 UK Prime Minister Liz Truss showed no sign of backing down on her economic policies that yesterday forced a dramatic £65 billion intervention from the Bank of England, blaming Russia’s war in Ukraine for the market turmoil that pushed the pound to a record low.

“I’m very clear the government has done the right thing,” she said Thursday in a round of interview to local BBC radio stations. “This is the right plan.”

The remarks were Truss’s first since the £45 billion of unfunded tax cuts were unveiled six days ago. The central bank was forced to step in and buy gilts as a week of market upheaval left many pension funds facing margin calls. The British currency fell after the comments before later rebounding. The price of government debt also fell as Truss spoke, before paring losses.

Truss has made the most turbulent debut of any British prime minister in peacetime. In just three weeks, her administration has been battered by a crisis of confidence in her policies that have triggered a collapse in the pound and a surge in borrowing costs that threaten to push the UK toward a deep recession and a housing market crash.

It was the first time Truss has publicly addressed the market turmoil, which was sparked Friday when Chancellor of the Exchequer Kwasi Kwarteng announced the largest package of unfunded tax cuts in half a century.

After the pound hits a record low and the Bank of England intervened to the...

In her first comments on UK market turmoil, Liz Truss told the BBC, “I’m very clear the government has done the right thing." The pound fell as she was speaking. 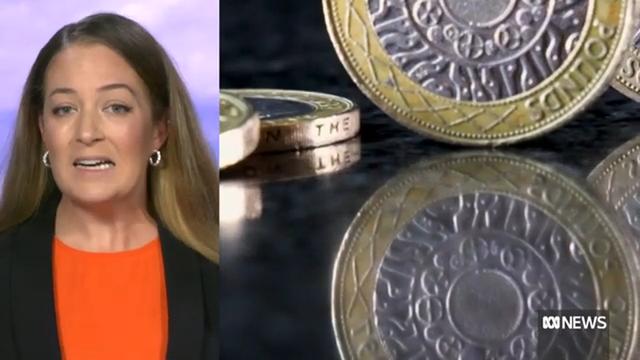 Read the post/thread at Defending-Gibraltar that contains this video: WARNING: Banking system collapse https://defending-gibraltar.net/t/warning-banking-system-collapse/4000/ To survive what is coming, read/study: https://thewayhomeorfacethefire.ne…

No easy way out of Truss’ ideological insanity, with Britons set to be the losers

These strategies require cash collateral to be held with an LDI manager; more cash may need to be added in response to market moves. Last week’s sharp spike in long-term bond yields (which mean a fall in bond prices) saw pension funds using LDI strategies face unprecedented demands for more cash. Schemes that could not meet these calls risked defaulting or having their hedging positions closed. 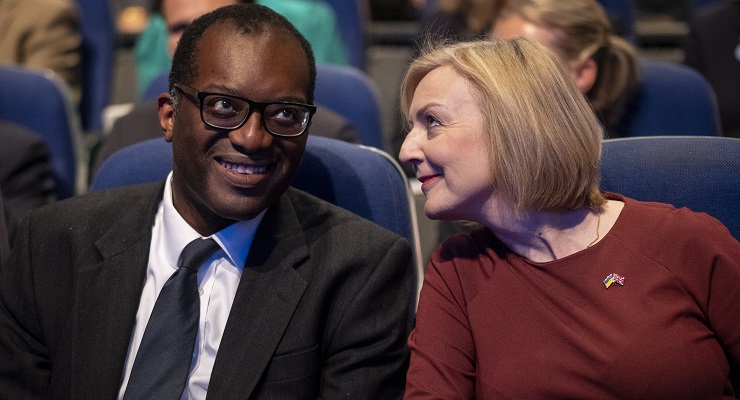 If you're stupid enough to cause a big spike in the cost of borrowing by your government, you end up inflicting all sorts of damage.

If the UK cuts public service funding this would no doubt cause massive rioting to accurse.

Is UK's financial disaster a warning to the world? 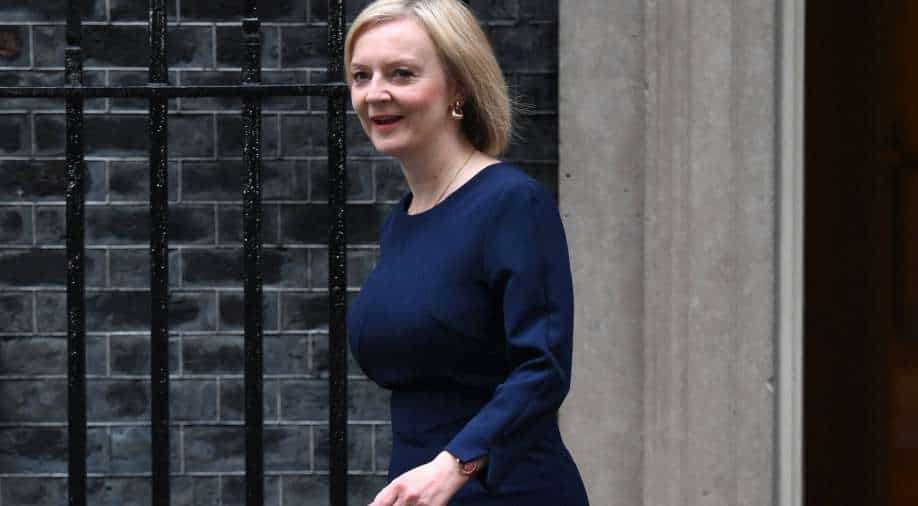 Is UK's financial disaster a warning to the world?

It has been barely a month since Liz Truss took over the reins from Boris Johnson as the UK’s Prime Minister and it seems that she is already facing a major crisis in gaining faith of the people. According to the Observer poll, the approval ratings...

The Indian rupee hit a record low of 82.22 against the dollar on Friday as rising oil costs and a strong dollar index dampened investor confidence.

The rupee had previously reached a session low of 81.88. Traders will now be intently examining US payrolls report to gain a new understanding of the country's inflationary pressures.

Following recovery from a two-week low, the dollar index, which measures the value of the dollar against a basket of six significant rival currencies, was barely changed at 112.032.

In light of rising commodity costs, the World Bank on Thursday reduced India's GDP projection for this fiscal year by a whole percentage point.

The weakness of the Asian equities markets today followed the overnight lower finish on Wall Street. The benchmark Sensex index for the Indian stock market fell more than 250 points in early trade.

“Traders will be concerned as the World Bank projected a growth rate of 6.5 per cent for the Indian economy for the fiscal year 2022-23, a drop of one per cent from its previous June 2022 projections, citing the deteriorating international environment," said Mohit Nigam, head, PMS, Hem Securities, reported Live Mint.

Brent crude futures were trading at or above $94.31 a barrel and were expected to post significant weekly gains.

Beginning in November, the Organization of Petroleum Exporting Countries and its partners want to cut production by two million barrels per day.

However, because some countries are pumping far less than their mandates, the real-world drop will probably be between 1 million and 1.1 million, according to Saudi Arabia's oil minister. 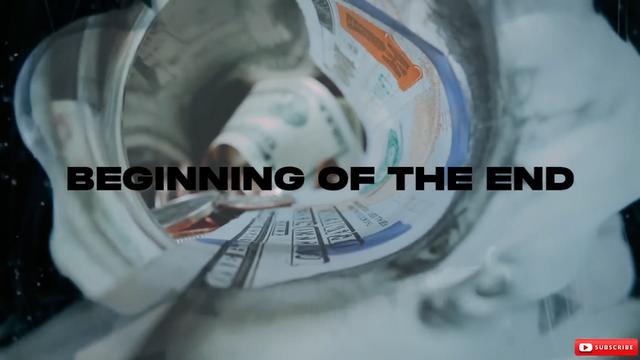 I don't buy the idea that fractional reserve banking is responsible for creating prosperity at all but the rest of it is good https://yewtu.be/watch?v=YBBnQmRcRI4 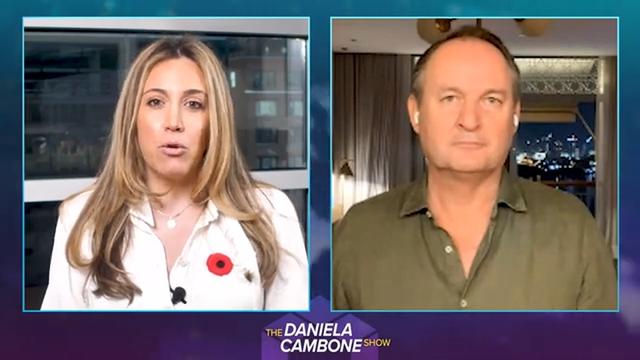 BRICS Are a Major Waking Giant Its the West Against the Rest Warns Willem...

Further research on the post/thread at Defending-Gibraltar that contains this video: WARNING: Banking system collapse https://defending-gibraltar.net/t/warning-banking-system-collapse/4000 To survive what is coming, read/study: https://thewayhomeorf…

BRICS Are a Major Waking Giant Its the West Against the Rest Warns Willem..