The Pretend Bishop Upon This Rock

Peace be within you and upon you.

YESTERDAY marked what would have been the late John Lennon's 71st birthday. So what? You may well ask.

Lennon also once wrote a ballad, which mentioned Gibraltar, while in the next breath blaspheming The Lord's name. The ballad of John and Yoko.

In previous communications, dating back from October 2018, you may recall that we each respectively made cryptic references to “One of The Fab Four”. Recall, I implicitly mentioned the famous Beatle via a reference to JAHTALK's From Speke (John Lennon Airport) To Malta (Gudja) article, whereupon you reciprocated by subsequently implicitly quipping to me about “starting a revolution” in the space of three short months.

In that earlier letter from 2018, entitled "From Speke to Malta", my opening Gudja Gambit paragraph directly made reference to former US papal nuncio, Archbishop Carlo Maria Viganò. Replicated in part below are relevant paragraphs from the opening, middle and closing parts of my letter to you .

Somewhere in the middle of my letter, I cited something you had written down in one of your letters writing this:

In my final paragraph, I explained the meaning of “From Speke to Malta” thus.

On The Way to Emmaus Again

Disappointingly, although you granted me a short meeting, you were not of a mind in the meeting to meaningfully discuss Christ and His vitally important interest in Gibraltar and so the above proposed agenda was somewhat side-stepped.

Some time afterwards, in a second short impromptu meeting, Christ asked me to broach with you, the subject of His own letter written for you, given that He had taken the trouble to address you directly in correspondence dated 19th February 2020.

The wording of Christ's letter is replicated below:

After having confirmed seeing His letter, you quite candidly rejected Christ before me.

In the same meeting in the Cathedral, I broached the subject of an unsavoury incident, which had taken place inside of the Cathedral on 26th January 2020. With reference to that particular incident, recall I questioned you regarding the necessity for one of the defendants to be prosecuted. The intended prosecution seemed so “unchristian-like", and in opposition to Biblical teachings. My plea to you back then, was for you to perhaps show some leniency towards the defendant (Tracy Hewitt). Seemingly, that plea has also fallen on death ears. Please excuse the freudian slip.

Anyway, in a few days time, on 12th October 2021, that incident once again may rear its ugly head, and come under the spotlight, given certain members of your Satanic Priesthood have made it become the subject of a scheduled court hearing and trial of the defendant.

Recently, as this long drawn-out case has shamelessly been allowed to drag on, extra personal interest in its progress has led into pursuing an altogether more incisive course of action on my part. In the first instance, I have recently attempted to submit an Amicus Curiae brief (Friend of The Court) in the form of a hard-bound dossier. Under Christ's supervision, a decision was also made to place the dossier into the wider public domain, prior to any trial.

We deem it is both timely and in the public interest for the people of Gibraltar to learn about the Whore of Babylon, otherwise known as The Woman That Rides The Beast. The online version of the dossier entitled "NOT UPON THIS ROCK" can be viewed here. In the space of just three days, it has received over 1,000 views, from an audience made up mostly of Gibraltarian Catholics, but in addition to this development, a hard copy version is enclosed for your personal and urgent consideration, preferably before the start of the trial.

Since a special feature of the Amicus Curiae brief dossier concerns several more recent and even more insightful letters from Archbishop Viganò, I would urge you to side with Viganò, over and above the Satanically inspired Jesuit, named Bergoglio. In arguably the Archbishop's best and most controversial letter to date, Viganò spells it out for you, and even makes reference to John Lennon's song entitled “Imagine” and places it contextually under a sub-heading: “The Luciferian Matrix of the New World Order.” That starkly termed heading is preceded by no less disturbing headings such as "The criminal mens", "Deep state and deep church", "Liaisons Dangereuses". and "The world depopulation plan". 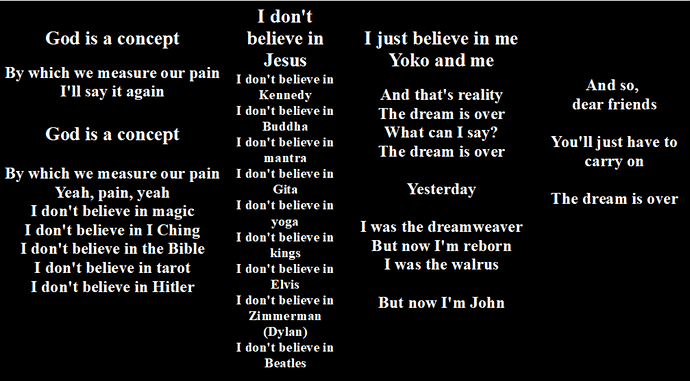 The ever insightful Archbishop Viganò goes on to write this.

"If one does not understand that the ideological roots of ecumenism are intrinsically linked to Masonic Luciferian esotericism, one cannot grasp the connection that links the doctrinal deviations of Vatican II to the plan of the New World Order. The revolution of 1968 was a sad example of those pacifist and ecumenist ambitions, in which the “Age of Aquarius” was celebrated by the musical Hair and then by John Lennon with Imagine (1971):"

Historically, I have raised the subject of some of Viganò's letters with Charles Azzopardi and Stuart Chipolina on my various visits to St. Theresa's Church. Stuart did not really comment upon the letters he read, but Charles showed an inclination to denounce the Archbishop in ad hominem attacks, saying to me that the Archbishop had lost the plot, owing to the fact that he had failed to be given a "red hat". Charles' viewpoint differed from mine.

It seems obvious to me that a white zuchetto would have far better matched his head than the head of Jesuit Bergoglio. I could be wrong about this, and I hope that's so, but it also seems very evident to me that you have sided one hundred percent with Jesuit Bergoglio, and are similarly as dismissive as Azzopardi was, of the revolutionary messages from the former papal nuncio.

'Viganò's Motto
SCIO CUI CREDIDI
I know Him in whom I have believed.

Returning to the need to speak about starting a real and ever lasting revolution on The Rock of His Defence, agenda item 12 and my former From Speke to Malta correspondence, "Date and Time of Meeting with Christ in His Second Coming" remains a burning question for you, but I have to stress that time is nearly out.

Finally, permit me to return to how I started this article.

John Lennon was, without necessarily realising why, prophetically speaking The Truth here, and for your edification, I will now attempt to explain exactly why by quoting directly from Christ's JAHTRUTH website. I implore you to read this.

The Word of God told Isaiah the Prophet (in chapter 42:10-11),
Let the Inhabitants of The Rock sing The 'New Song' - The Song of Moses and The Lamb.

What is the "New Song" and why does "The Word" want YOU to learn to sing it and to Live and sing it on The Rock ?

For the answer we have to turn from the Old Covenant Book of the Prophet Isaiah to the New Covenant Book of the Revelation/Apocalypse given to John the Apostle by his Master, "The Word", who had previously, temporarily, been made flesh (incarnated), as it is written in the Gospel of John chapter 1 verse 14:-

"And the Word was made flesh (incarnated ), and dwelt among us, (and we beheld his glory, the glory as of the only incarnated of the Father) full of Grace and Truth."

Why on The Rock? (Read my " Close Encounters of the Gibraltar Kind " and " DUNE - Gibraltar " and " Message for Gibraltar from God " Booklets, to find the answer).

In Revelation/Apocalypse it is written in chapter 14:3 & 5:9 that only the people who are able to learn to sing the "New Song " were to be redeemed (released ) from Planet Earth (and ALL the rest will be cast into The Lake of Fire - Revelation 21:7-8 ).

It is therefore CRITICALLY important for YOUR survival that YOU learn to sing the "New Song " - NOW .

If MUSIC be the food of LOVE, please read on!

Peace be with you, and upon you.

6 Likes
Carmel Zammit's Christmas Message is Misleading Gibraltar
BCP: Response to the third vaccination terror in the Vatican
'No desire for truth' in Spain Catholic church over child sex abuse
SleuthER95 October 22, 2021, 3:13am #2 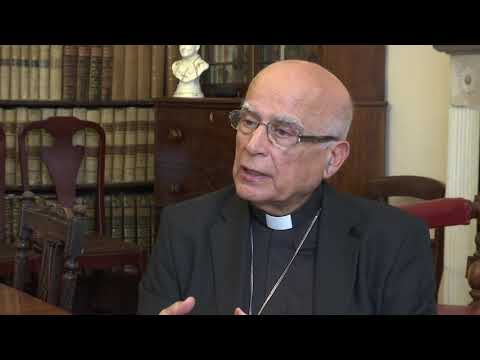 This consultation exercise with the people, may present a golden opportunity to bring the Catholic Church under the SPOTLIGHT UPON THIS ROCK. What is needed here is a REVOLUTION, in accordance with The Book of REVELATION.
Revelation
18:4 And I heard another voice from heaven, saying, COME OUT of her, MY people, that ye take not part in her sins, and that ye receive not of her plagues (punishment).