Pension Scam is behind the tyranny in Europe 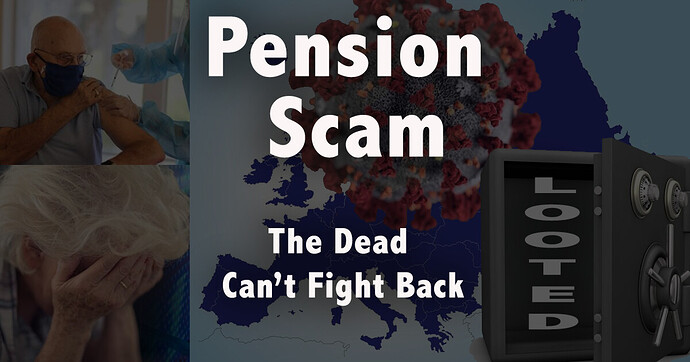 Reiner Fuellmich: The reason why there's so much pressure on Europe and on Germany in particular is because – we learned this from interviewing two former investment bankers – Europe is completely broke and the European Pension funds are completely empty.

And if people find out about this – that there may be a problem with their pension – then of course, they will know who's responsible: It's the Davos Click; it's the "Great Reset" people.

There are keeping us under a lot of pressure so we won't find out. They are hoping that as many people as possible get "vaccinated" by the Fall.

And they are hoping at that point, those people who have been "vaccinated" probably won't be able to defend themselves.

Reiner Fuellmich: Pension Scam is behind the tyranny in Europe – they don’t want you to know the truth! Reiner Fuellmich: Pension Scam is behind the tyranny in Europe – they don’t...

Truthseeker Note: Reiner Fuellmich was told this by two investment “bankers” and we suspect that what they told him was a limited hangout.

The REAL objective behind the vaccination program is far more sinister. It goes beyond distraction from financial crimes to depopulation and genocide and aims to deliver what remains of society after its been decimated by Covid-19 into the trall of much darker forces.

That is not to say that Reiner Fullmich is in anyway part of this deception. He’s just failed to realise that he’s been exposed to a ‘limited hangout‘.

Dr. Fuellmich is well-aware of the sinister depopulation agenda:

Insider - Vaccines are Killing the Elderly

New Analysis: Pfizer Vaccine Killed ‘About 40 Times More Elderly Than the Disease Itself Would Have Killed’