On this day 21 September – Jeremiah The Prophet Died 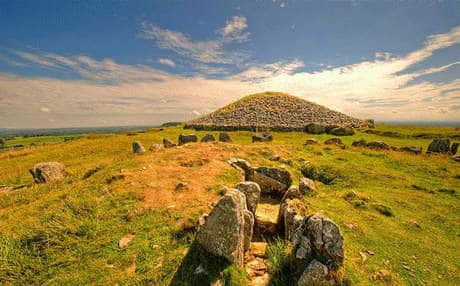 Cairn T in Loughcrew, Ireland was lined up with the Autumnal Equinox so that there would be a reminder, every year, of the Prophet Jeremiah and his death. 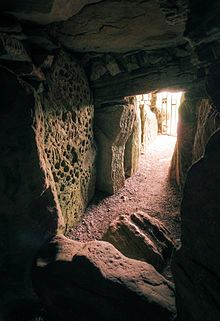 Jeremiah was commissioned by God to take/uproot the tender twig, Teia Tephi, daughter of king Zedekiah of the High Cedar (House of David-Judah/Pharez) and plant her in the Isle of Destiny.

She married the High King of Ireland and they ruled by God’s Law on the Hill of Tara (Torah), where The Ark of The Covenant is still buried.

Jeremiah The Prophet was the original Patriarch of Ireland, although many people attribute March 17 to an imposter.

JAH explains more about the hieroglyphics in the tomb in this short video:

Before they ended up in Ireland (Hibernia/Hebrew’s New Land), they escaped Jerusalem; went to Egypt; then Gibraltar; Spain (Iberia/Heberia/Hebrew’s Land), Marazion, Cornwall (Marazion means “bitter/sad for Zion” because it was sacked of which they learned through Jeremiah and Teia.

If you like music videos, check “Emerald Isle” out which reveals Ireland’s Destiny, including recovery of The Ark of The Covenant and the bringing back of The Stone of Destiny.

thank you, its one of my favorite stories

Dear @DOTS, Thank-you for the lovely and true history story.

Hi. I wanted to ask whether you knew the meaning of the name Teia? Many thanks

welcome
JAH has recovered the autobiography of Teia Tephi, the queen of all of Ireland and Gibraltar who lived and ruled from Tara, Co. Royal Meath, in the sixth century B.C. The book contains detailed information about the fall of Jerusalem in c. 588 B.C. and Teia Tephi’s subsequent journey to Ireland with Jeremiah the Bible Prophet in 583 B.C., as is recorded in The Old Testament Book of Jeremiah.

Jeremiah 1:10
See, I have this day set thee over the nations and over the kingdoms, to ROOT out, and to pull down, and to DESTROY , and to throw down, to build and to PLANT .

In The Book of Tephi, there are a number of quotations that relate strongly to The Bible. For example Teia Tephi expands on what Jeremiah wrote in The Bible in this excerpt:-

Book of Tephi 2:2
Tephi, I was but weak, a little thing in men’s eyes,
A tender twig of the Cedar, yet sheltered of prophecies.
The Prophet of God revealed this. Is not his speech made plain?
He came to " ROOT and DESTROY ". He went forth “to PLANT again”.

The Book of Tephi describes in detail the journey Jeremiah took with Teia Tephi, The Lia Fail (Stone of Destiny) and The Ark of The Covenant from Jerusalem to Ireland, via Tanis in Egypt (as in “Raiders of The Lost Ark”) then on to Gibraltar (where she was proclaimed queen of the Gadite Israelites who live there); Breogan in Spain; Cornwall and eventually landing at Howth, near Dublin, in Ireland on the 18th. of June 583 B.C.

The Book then goes on to describe many of the significant events which occurred at that time in history and are associated with her journey from Jerusalem to Ireland. It is also full of Prophecies about many of the major events which have occurred in the world between her and our time (2,500 years); including the First-Coming of Christ and the colonizing of the world by the British Empire. The Book also gives some very significant prophecies about the times we now live in.

Perhaps the most relevant of her Prophecies, which is the only one in “The Book of Tephi, queen of Tara and Gibraltar” that remains to be fulfilled, is about this (our) time in history when she predicts that she would be recovered from her subterranean tomb on The Hill of Tara, in Co. Meath, Ireland; along with The Ark of The Covenant and once again bring peace and unity to all of Ireland as she had done two and a half thousand years ago; and that Christ would come out of her tomb with her, to be inaugurated King of all of Ireland, on the Stone of Destiny, at Tara, and this time, also bring peace and unity to the whole world.
https://jahtruth.net/tephi.htm

It is my understanding Teia is a nickname for Tamar, based on three notations from JAHTruth –

From: THIS IS A GREAT MYSTERY: MARRIAGE GUIDANCE

“When the nation eventually split and both kingdoms were finally deported, the resulting wars caused very great damage to both Zion and Jerusalem. Under the decree of Cyrus, only Jerusalem and the Temple were re-built by the returning remnant, and the reason is surely this: there was no longer a king to occupy Zion, for the Royal House of David was even then being established in the Isles of the West, where the Stone of Destiny - the Throne of David and the “Tender Twig” (king Zedekiah’s daughter Tamar “Teia” Tephi) had been taken and “planted” (Jer. 1:10) by Jeremiah the Prophet (the Ollamh Fodhla of Irish history).”

From: THE MASTER’S PLAN

“The line of kings from David to Zedekiah is recorded in the Bible. Zedekiah was the last king before the final captivity of the Kingdom of Judah, and he was carried away with his people into Babylon where he later died. His sons were slain in another Satanic attempt to wreck the Plan of God by bringing to an end the Royal House of David. Inheritance in Israel was allowed to come down through the female line, The Law being non-Salic (Num. 27:1-11). In this point The Law was in contrast to the heathen Salic law. It is known that Jeremiah took the daughters of Zedekiah to Egypt (Jer. 43:6-7). This took place in 588 B.C. Irish History of the sixth century is rich in ancient records regarding a holy man who came from Egypt via Spain, whose title was Ollamh Fodhla. He brought with him an eastern princess named Tamar “Teia” Tephi, and a great chest or box. Among other things, the party brought with them a sacred stone. The princess was married to Eochaidh the Heremon (head king) of Ireland, from whom the Scottish kings descended, and thence, our own Royal House, which still bears the emblem of the lion of Judah, and the harp of David. There is much evidence to support the foregoing, both in the secular and sacred pages.”

From: The Lia Fail - Bethel Stone

“The other tells how (in 583 BC - 700 years after Gathelus and Scota) Jeremiah brought king Zedekiah’s daughter Tamar “Teia” (Tea) Tephi and the Stone of Destiny - Jacob’s Pillar (Bethel) used as the Coronation Stone by the Pharez (Golden Lion) branch of Judah from Jerusalem to Ireland, via Egypt, Gibraltar, Spain and Cornwall and that after more than a thousand years at Tara, it was brought to Dunadd in Western Scotland (the Eastern Dalriada) by Fergus Mor mac Erc in c. 500 AD.”

Tamar seems to be a family name:

Tamar was the mother of Judah’s sons Pharez and Zarah. The story is in Genesis 38. She is mentioned in the 1 Chronicles and the Book of Ruth.

There is a location also called Temar:

Tamar means date, the fruit, from the date palm.

Teia Tephi tells us her name in the Book of Teia Tephi:

6:4
“…Hail,” I said, “to The Rock that shall never be overthrown By the sea, but shall stand its warder, a keeper of many ways To guard the treasures of ocean; and unto this town be praise. Though its name (Melcarth) be abomination, yet here is a shelter found, And space for our feet to tread on, that weary long for the ground, And welcome from tongues that are near our own, and an open heart To hear The Cause of our coming, and bless us ere we depart. Upon Elier God send blessing! Yea, as a lofty tree Be his fourscore years an hundred to hold the Gate of the Sea… This is the blessing of Tephi.” Then he and his sons arose. And cried my name, but their lips spoke strangely, and might not close. On its sound, for, “Teia, Teia, Teia,” these GAD ites cried. And, “Teia, Teia, Teia,” the voice of their Rock replied.

welcome to the forum