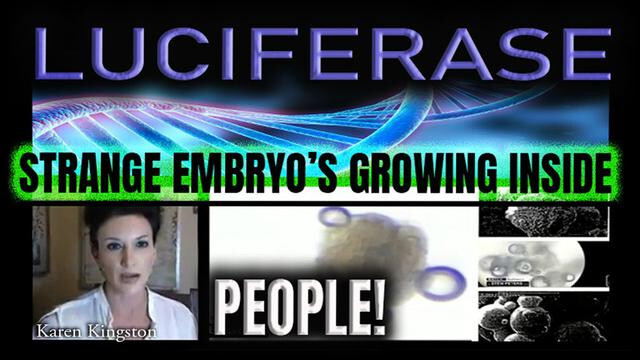 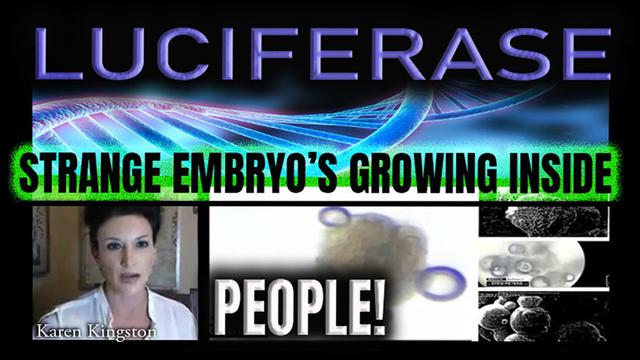 ANOTHER MINDBLOWING interview with Biotech analyst - Karen Kingston. The Frankenstein shots are REVEALING eerier growth in people than we thought possible!

ANOTHER MIND-BLOWING interview with Biotech analyst – Karen Kingston. The Frankenstein shots are REVEALING eerier growth in people than we thought possible!

The Moderna vaccine has luciferase. Bill Gates tracking system is 0202666, the one that they are trying to pass into Congress is HR 060606 - The Whole Pandemic Was A TROJAN HORSE For Vaccines – Fauci Is The Epitome Of Evil 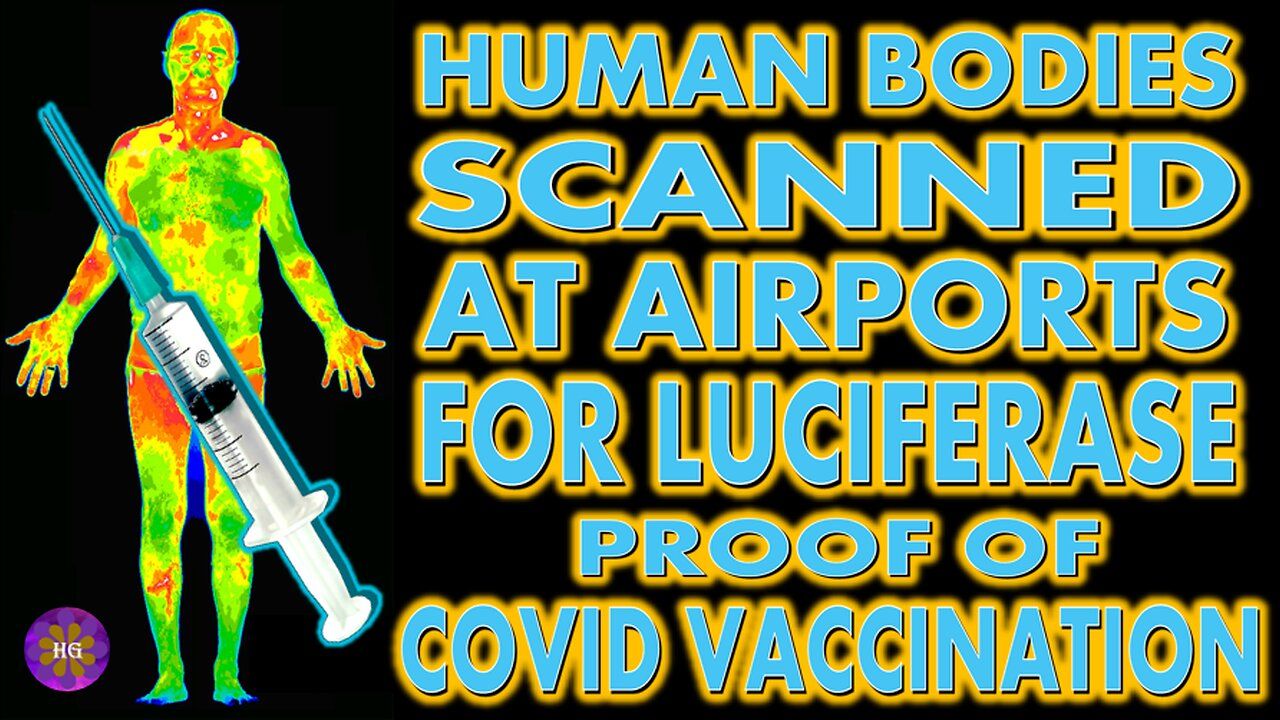 Human Bodies Scanned At Airports For Luciferase Proof of Vaccination 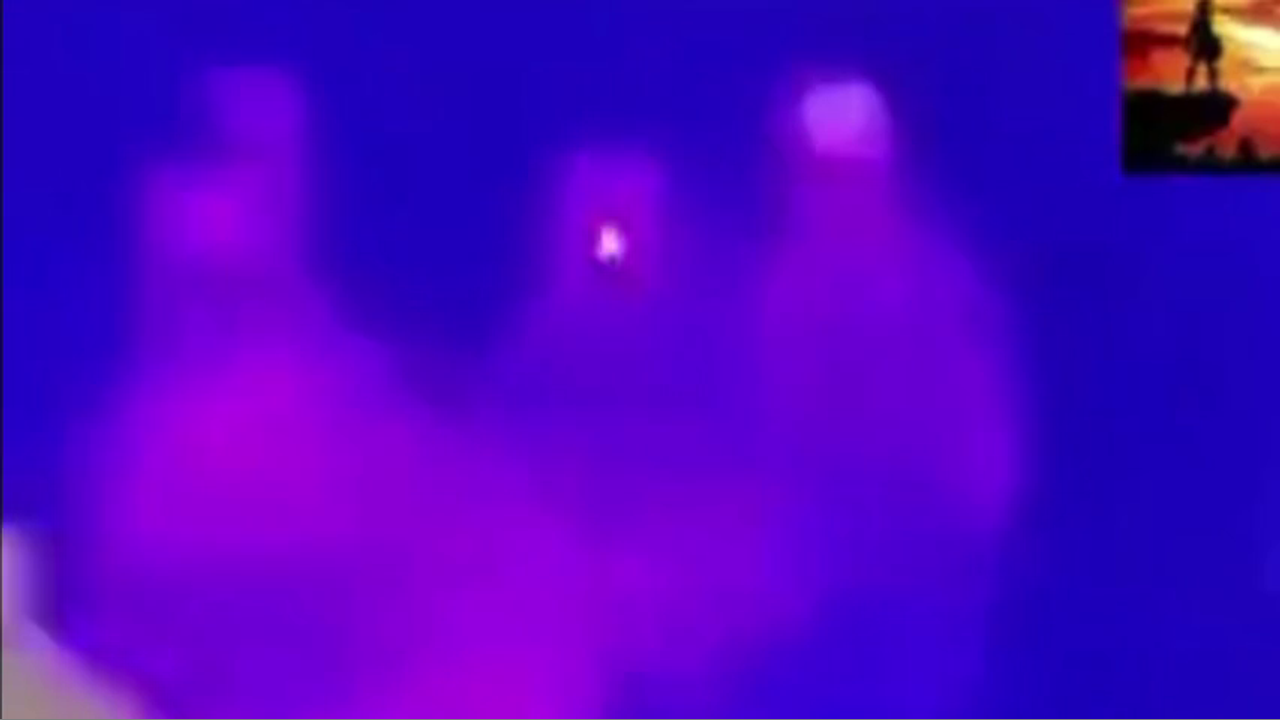 Airport Scanners Show Mark Of The Beast Luciferase Is In People's Arms And...

Airport Scanners Show Mark Of The Beast Luciferase Is In People's Arms And Brains!!Mirrored - Realthingtv 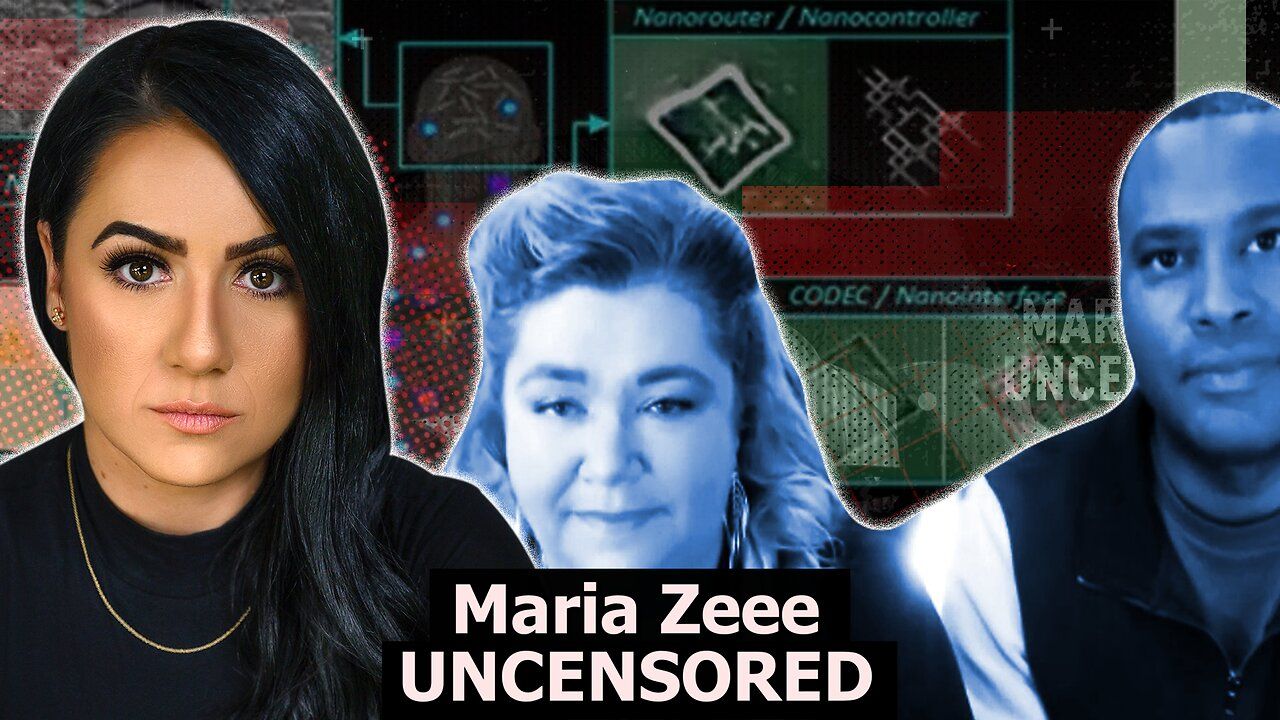 Uncensored: LUCIFERASE to go Into the FOREHEAD or RIGHT HAND! Injected People...

Maria is joined by Hope & Tivon from Fix the World Project Morocco to expose how injected people are now detectable by various airport scanners, how people are emitting not only a bluetooth signal & MAC address but harmful EMF signals,...

More Info on this and Mac Addresses etc

TY. An excellent and informative interview.

Interesting how the Bluetooth logo is a combination of two witchcraft symbols (Rune Stones).

You are welcome, Nancy 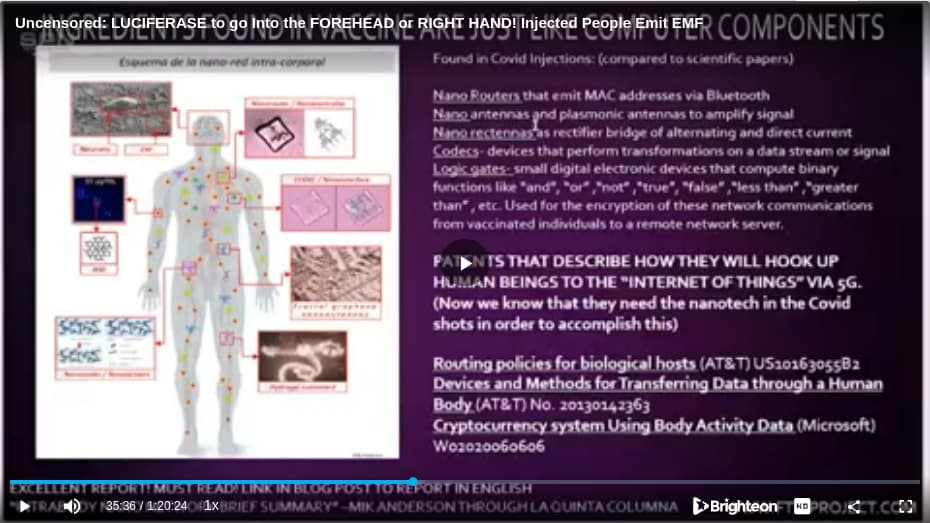 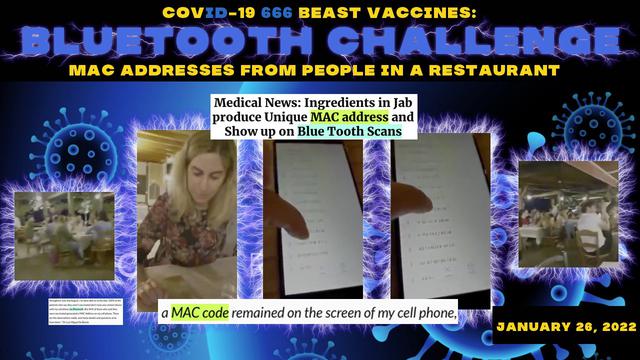 COVID-19 666 Vaccines: Bluetooth Challenge - Mac Addresses From People In A...

Bluetooth Mac Addresses are still being exhibited by COVID-19 Vaccinated people. In this video, people displayed many Mac Addresses at a Hispanic Restaurant. You can clearly see all of the Mac Addresses that cannot account for cell phones. These are…

In this special report, two Engineers Matt Taylor and Tivon Rivers discuss the nanotech that has been found in the Covid jabs, PCR, and Masks. Using high quality microscope imagery so you can see with your own eyes: self assembling nanotech activated by EMF, the vaccine liquid killing blood cells on contact, nanotech fibers purposefully inserted into the masks and test swabs during manufacturing with the intention of being deposited into the human body and more. 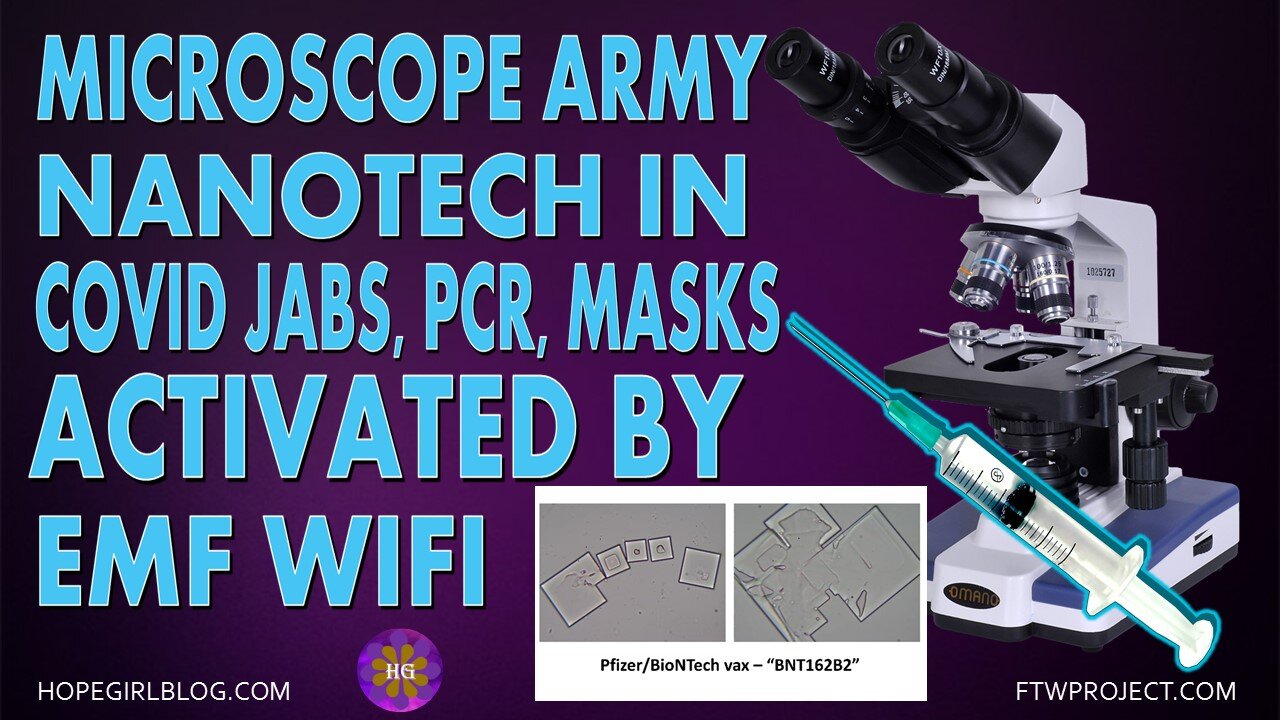 Two Engineers Matt Taylor and Tivon Rivers discuss the nanotech that has been found in the Covid jabs, PCR, and Masks. High quality microscope imagery so you can see with your own eyes: self assemblin

FIBROUS CLOTS AND TECHNOLOGY ARE THE CONNECTED? SPECIAL REPORT WITH HOPE AND TIVON AND DR. JANE RUBY

Fibrous Clots and Technology Are The Connected? Special Report with Hope and Tivon and Dr. Jane Ruby

In this special report Hope and Tivon of FTWProject.com interview Dr. Jane Ruby. This is a conversation between a medical professional and a technology professional and finally bridges the two respective fields when it comes to what is happening to humanity from the Covid injections. We ask Dr. Jane Ruby if the white fibrous structures found by embalmers in the vaccinated deceased around the world could have been made by and from the nanotechnology in the shots. And we mention how so few doctors are willing to talk about the technological aspects of the Covid agenda such as 5G, EMF and graphene oxide. This is a groundbreaking high level discussion that is packed with clues to help us in our fight to stop the destruction being done to humanity through the Covid agenda. 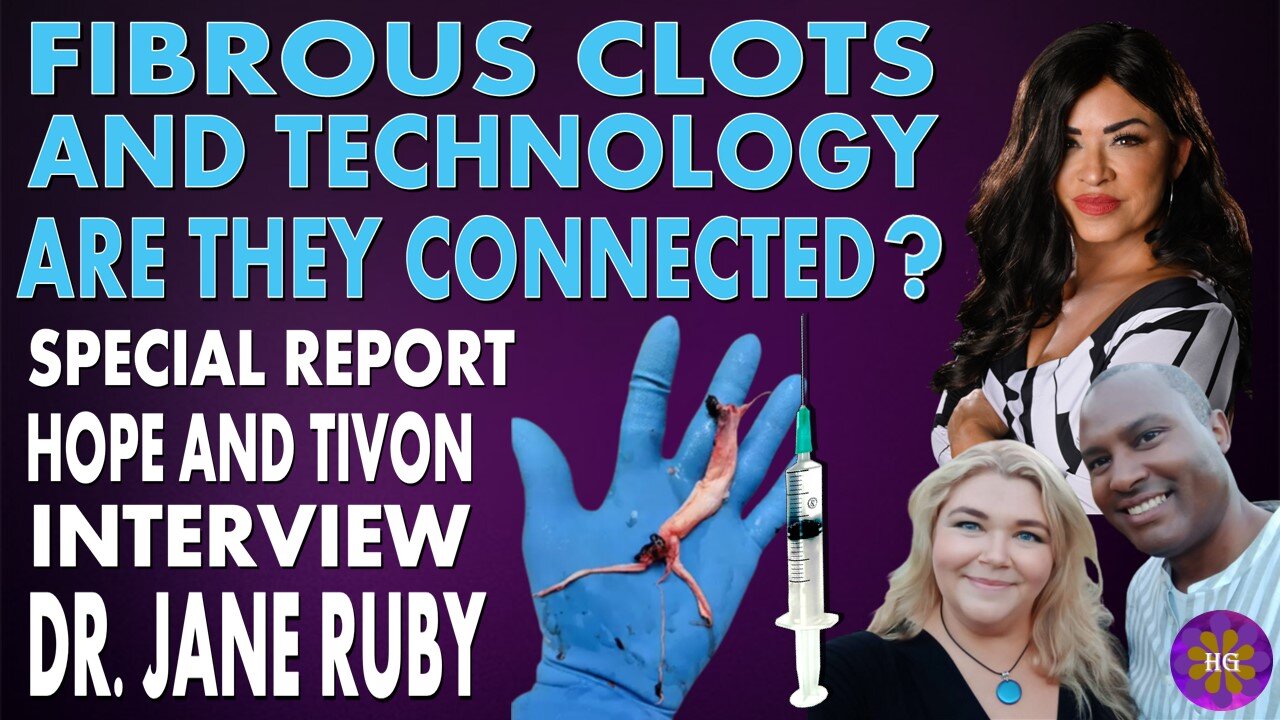 Fibrous Clots and Technology Are They Connected? Special Report with Hope and...

In this special report Hope and Tivon of FTWProject.com interview Dr. Jane Ruby. This is a conversation between a medical professional and a technology professional and finally bridges the two respect 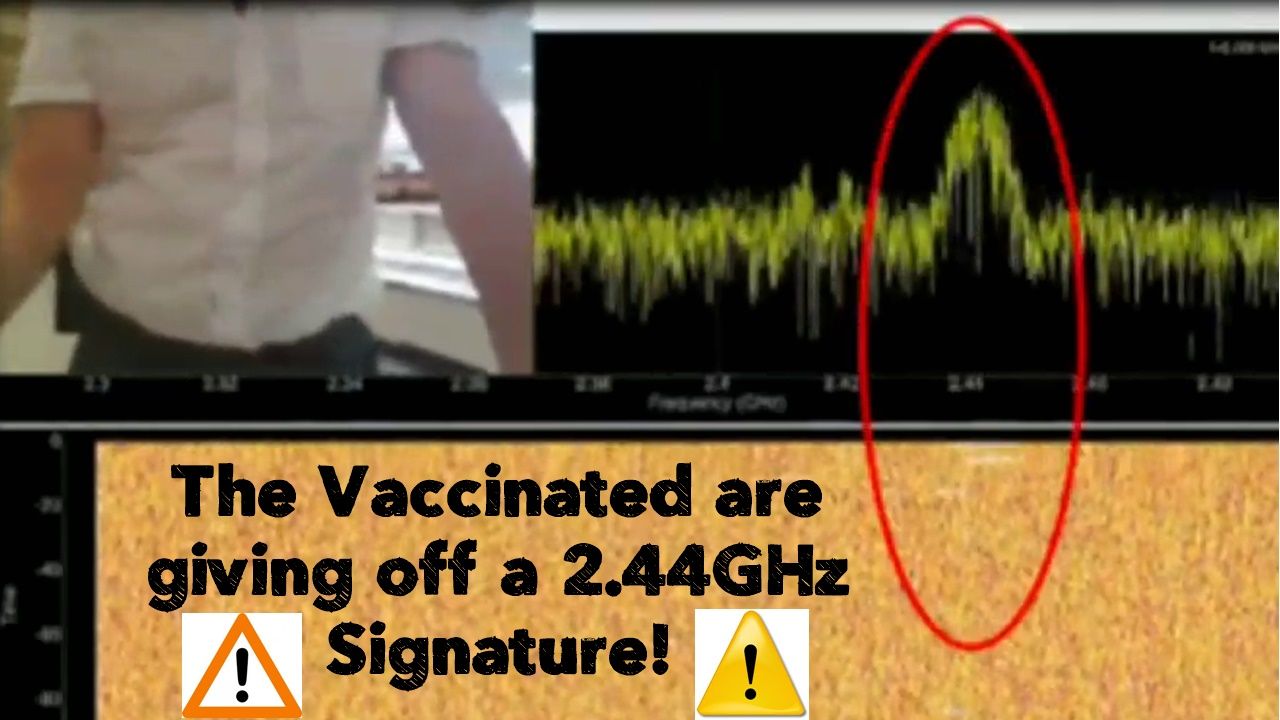 The Vaccinated are giving off a 2.44GHz Signature! ⚠️

The Vaccinated are giving off a 2.44GHz Signature! ⚠️A British man in the states has cleverly put together a device that measures frequency of those who are Vaccinated. The device is linked to a monitor that shows the spikes on a graph when in...

@ThePrisoner ,
Thank-you. Everyone needs to see this proof. Is 2.44 GHz considered low EMF, enough to cause brain damage?
Thank-you.

Accumulating evidence suggests significant biological effects caused by extremely low frequency electromagnetic fields (ELF-EMF). Although exo-endocytosis plays crucial physical and biological roles in neuronal communication, studies on how ELF-EMF regulates this process are scarce. By directly measuring calcium currents and membrane capacitance at a large mammalian central nervous synapse, the calyx of Held, we report for the first time that ELF-EMF critically affects synaptic transmission and plasticity. Exposure to ELF-EMF for 8 to 10 days dramatically increases the calcium influx upon stimulation and facilitates all forms of vesicle endocytosis, including slow and rapid endocytosis, endocytosis overshoot and bulk endocytosis, but does not affect the RRP size and exocytosis. Exposure to ELF-EMF also potentiates PTP, a form of short-term plasticity, increasing its peak amplitude without impacting its time course. We further investigated the underlying mechanisms and found that calcium channel expression, including the P/Q, N, and R subtypes, at the presynaptic nerve terminal was enhanced, accounting for the increased calcium influx upon stimulation. Thus, we conclude that exposure to ELF-EMF facilitates vesicle endocytosis and synaptic plasticity in a calcium-dependent manner by increasing calcium channel expression at the nerve terminal.

During the past few decades, considerable evidence has shown that non-thermal exposure to extremely low frequency electromagnetic fields (ELF-EMF)1 can induce biological changes both in vivo and in vitro, including gene expression2, tissue repair, and proliferation3, and it can also be conducive to the treatment of neurological disorders4,5. Despite accumulating experimental evidence suggesting significant biological effects, the underlying mechanisms are poorly understood. Laboratory studies have pointed to the initial effects of ELF-EMF being on the cellular level, especially the physiological properties of the cell membrane and channels6,7,8,9,10. Therefore, the neurons in the central nervous system are likely to be the most sensitive candidates, as exposure to ELF-EMF induces electrical fields and currents, which may excite or suppress neuronal activities through interactions with voltage-gated channels11,12.

Vesicle endocytosis, which couples to exocytosis and recycles exocytosed vesicles at the presynaptic nerve terminal, is a basic cellular mechanism that critically maintains synaptic transmission and plasticity13,14,15. Membrane fission caused by endocytosis also contributes to the homeostasis of the plasma membrane14,16. Although endocytosis fulfils such a crucial role in both physical and physiological aspects, very few studies regarding how ELF-EMF regulates this important cellular event in the central nervous system were reported and data from experimental studies are controversial17. In the present study, we directly measured vesicle exocytosis and endocytosis with accurate capacitance measurements14,18 at a central synapse, the calyx of Held. At calyces, several forms of endocytosis have been reported, including slow endocytosis14, rapid endocytosis19, endocytosis overshoot20, and bulk endocytosis21, and their underlying molecular mechanisms are different. Slow endocytosis is believed to be clathrin-dependent, whereas the others are not22. Whether exposure to ELF-EMF affects all forms of endocytosis is unknown.

In this study, we provide for the first time direct evidence that ELF-EMF facilitates all forms of endocytosis and potentiates PTP16,29. Furthermore, the enhanced expression of calcium channels at the presynaptic nerve terminal, especially the P/Q type, increases calcium influx upon stimulation and facilitates vesicle endocytosis and synaptic plasticity. Our study provides novel insight into how ELF-EMF regulates neuronal activity and plasticity by increasing voltage-dependent calcium channels at the cellular level....