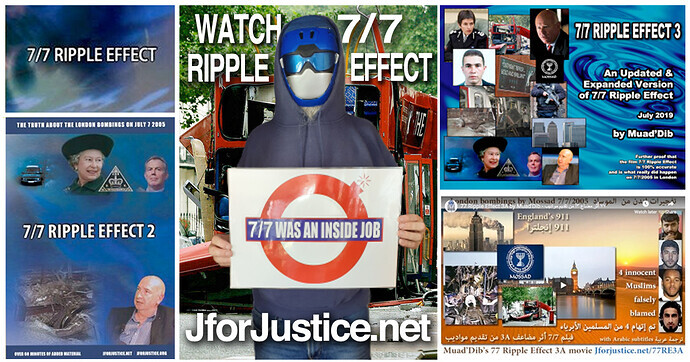 It may seem like the perpetrators have gotten away with it - on a surface worldly level – but given what was uncovered in 7/7 Ripple Effect – do we really think they won't be brought to justice in the end?

59:3 For your hands are defiled with blood, and your fingers with inequity; your lips have spoken lies, your tongue hath muttered perverseness.
59:4 None calleth for justice, nor [any] pleadeth for Truth: they trust in vanity, and speak lies; they conceive mischief, and bring forth inequity.
59:5 They hatch adder's eggs, and weave the spider's web: he that eateth of their eggs dieth, and that which is crushed breaketh out into a viper.
59:6 Their webs shall not become garments, neither shall they cover themselves with their works: their works [are] works of iniquity, and the act of violence [is] in their hands.
59:7 Their feet run to evil, and they make haste to shed innocent blood: their thoughts [are] thoughts of inequity; wasting and destruction [are] in their paths.

This is the original world-renowned documentary that explains what really happened in London on July 7, 2005. [7:7 Ripple Effect] Released: 5 November 2007 Watch the film on Gibraltar Messenger’s Channel on Brighteon: Transcript can be read on J for Justice. It is this documentary that was sent to the courts as an amicus curiae brief to the judge and jury of the Kingston Crown Court, England, where three Muslim men (Waheed Ali, Sadeer Saleem and Mohammed Shakil) were standing trial for t…

[7:7 Ripple Effect 3] Released: 7 July 2019 On this the 14th anniversary of 7 July 2005 London Bombings, Muad’Dib/JAH has released 7/7 Ripple Effect 3, to remind everyone who the real perpetrators are, in the hope that the people with faith will get involved and finally bring them to justice. In this updated and expanded 2019 edition of 7/7 Ripple Effect, Muad’Dib adds information about Mossad’s involvement as well as new information about the murder of Jean Charles de Menezes. Watch the fi…

[7-7 was an inside job] “Regarding the 7/7 attacks in London let’s look at the facts, and what we were told, and compare them. Then, using Ockham’s Razor and common-sense, let us see what conclusions are to be drawn, so we can all understand what most likely really did happen that day,” said Muad’Dib at the opening of 7/7 Ripple Effect, a documentary he produced under the name Muad’Dib, about the terror attack on London being an “inside job”. Muad’Dib is Arabic for “Teacher of Righteousness”. …

John 5:22 For the Father judgeth no man, but hath committed all judgment unto the Son:
John 5:30 I can of mine own self do nothing: as I hear, I judge: and my judgment is just; because I seek not mine own will, but the Will of the Father which hath sent me.
John 8:7 And yet if I judge, my Judgment is true: for I am not alone, but I and the Father that sent me.