Globalists making final push for depopulated one-world order: How do we resist?

[The only solution is to enforce God's Law against these monsters.] 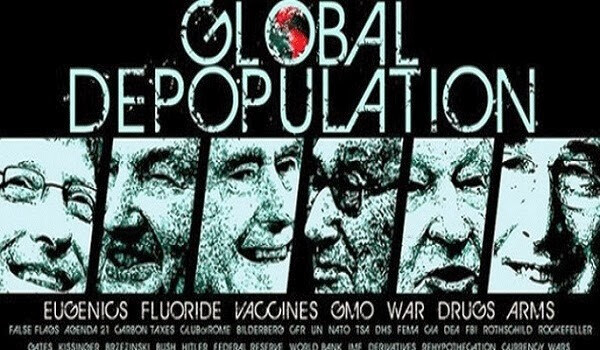 Globalists making final push for depopulated one-world order: How do we resist?

Are you still trying to make sense of all the insanity in the world, or maybe trying to help a friend or family member make sense of it? Drag queens in schools, libraries, even churches and other s…

For answers, consider reading and sharing my post from back on May 26, “Globalists have entered the kill phase of the Great Reset.”

That’s why we call them global predators. These globalists are in the final phase, the kill phase, of destroying the post-World War II liberal world order, which must be accomplished before they can implement a new world order based on a cashless digital economy tied to a digital ID that tracks every person and assigns them a social credit score.

Before you can “build back better,” you must eliminate every trace of the old world order. Burn it all down. Destroy families. Destroy economies. Destroy currencies. Make people suffer.

And the most critical component of their deconstruction plan is depopulation.

Everything you see going on in geo-politics today is meant to drive depopulation. From LGBTQ mania (they don’t reproduce) and food shortages to endless genetically engineered viruses and the fanatical religious fervor for ever-expanding abortion rights, and the introduction of deadly “vaccines” — it all points toward one thing – more death.

And now we have found yet another smoking gun comment from a key globalist figure, Dennis Meadows.

Meadows authored the 1972 book Limits to Growth, which was endorsed by the Club of Rome and is still sold on its website today. The Club of Rome was the originator of the goals contained in United Nations Agenda 21 Sustainable Development, and chief among those goals was the need for fewer human beings on planet Earth. Meadows argued in his book for a drastic depopulation program.

Two years later, in 1974, Henry Kissinger authored the Kissinger Report, which followed up on the same theme put forth by Meadows, advocating a systematic reduction of the population of Third World countries through the introduction of birth control (including abortion), fomenting civil wars and orchestrated famine. Now those same strategic weapons are being turned inward on the United States and the West, with the addition of poisonous medical treatments disguised as “vaccines.”

Bill Gates, Klaus Schwab and all of the global predators of today are committed to this same agenda.

That’s why Schwab told us last year that “nobody is safe unless everyone is vaccinated.” On its face, such a statement makes no sense. Why would no one be safe unless everyone is vaccinated? If it’s a true vaccine, each individual who receives it should be inoculated, right? Until you understand that these vaccines were never intended to save lives but to destroy them, you can’t make sense of what these psychopaths are saying. It’s not about your health, it’s about killing some and making others sterile. That’s why they say you MUST get them. To refuse them makes you no better than a criminal. No other vaccine has ever been marketed with that kind of all-or-nothing bravado.

Bill Gates, in his 2010 TED Talk, also revealed his overriding agenda when he said the key to achieving “net zero” carbon emissions, was depopulation.

“So you’ve got a thing on the left, CO2, that you want to get to zero, and that’s going to be based on the number of people, the services each person is using on average, the energy, on average, for each service, and the CO2 being put out per unit of energy. So let’s look at each one of these, and see how we can get this down to zero. Probably, one of these numbers is going to have to get pretty near to zero.

“First, we’ve got population. The world today has 6.8 billion people. That’s headed up to about 9 billion. Now, if we do a really great job on new vaccines, health care, reproductive health services, we could lower that by, perhaps, 10 or 15 percent.”

So it’s not like we needed another confession, another confirmation, from yet another globalist insider. We already had Kissinger, Gates, Schwab, King Charles and many others. But in case you did need another, here is Dennis Meadows spilling his guts and shedding crocodile tears while saying how badly he wants the vast majority of us dead

It’s truly amazing how these monsters speak in such warm and friendly tones as they’re telling their fellow human beings they need to die.

Meadows says the world’s population needs to be reduced from 7.5 billion down to 1 billion, but he “hopes” that we will all just agree to somehow be eliminated without becoming violent!

He knows damn well there’s no way to achieve that level of depopulation, we’re talking 87 percent, without spilling a lot of blood, on top of the blood that’s already being spilled on a daily basis through abortion and Big Pharma poisons.

As horrific as the abortion and Big Pharma industries have become, they can’t, on their own, get the global population down to 1 billion. They must trigger the next Great War. The preliminary phase of that war was kicked off when they released the deadly mRNA “vaccines” and pressured everyone to get them. It’s very telling that China isn’t giving its people the mRNA shots.

No, they are keeping their population strong while watching the Western nations weaken themselves. When we are sufficiently weakened by repeated jabs, look for China to make its move. Russia will draw us into war first, in Ukraine, and when enough of our military is deployed over there, that’s when China will make its move against Taiwan and possibly more.

They know the U.S., even before the shots were introduced and mandated on our military, was not prepared to fight on two fronts.

The runup to World War III will be gradual, collapsing our already weakened economy in the process. But civil war could break out sooner than world war, as it seems the U.S. deep state is already laying a narrative to accuse somebody, either the Russians or the Republicans, of somehow stealing the November 8 midterm elections.

So while many are predicting nuclear holocaust and World War III, I’m of the belief that civil war and economic collapse could come first.

Regardless of the order, most Americans today, unlike in the Great Depression, lack the resourcefulness and the skills to survive during an extended period of extreme economic hardship.

A friend who is an Iraq War veteran once told me that the one thing he learned in a war zone was that folks you thought were friends could turn on you overnight if it meant taking something you have in order to feed their starving children.

In the meantime, remember that we are the resistance to the Great Reset (aka global slave state). No politician, police force, no military unit is going to ride to our rescue. We defeat them through prayer, networking together and dedicated civil disobedience.