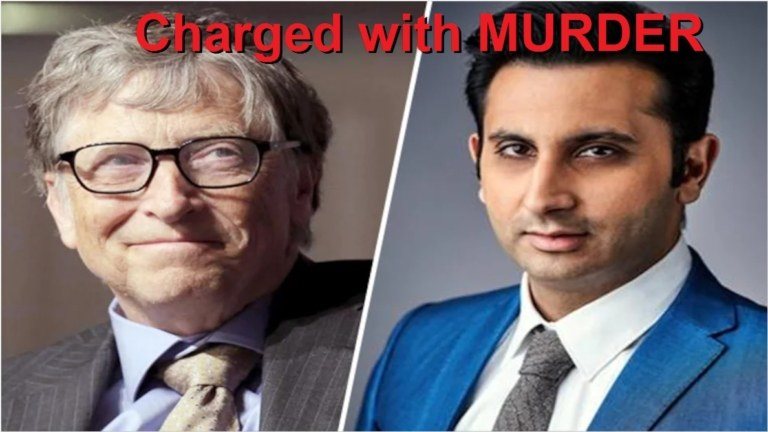 The Indian Bar Association is reporting that murder charges have been filed in India's High Court against two billionaires responsible for the AstraZeneca's COVID-19 vaccine, Covishield, for the murder of a 23-year-old man who was injected with the shot. The two named defendants are Bill Gates, and Adar Poonawalla, the CEO of Serum Institute of India (SII), reportedly the world's largest vaccine maker. According to corporate news sources, Adar Poonawalla's company produces not only the COVID-19 vaccine Covishield, but also over 50% of the world's vaccines that are injected into babies. The article goes on to quote case law in India which makes it clear that before giving a vaccine or any treatment to a person, he should be informed about the side effects of the medicine and also about the alternate remedies available. If any person is vaccinated by suppressing the facts or by telling a lie that the said vaccines are completely safe, amount to the consent being obtained under deception. In India, vaccination under deception or by force/coercion or by putting certain stifling conditions, is a civil and criminal wrong. According to the article, this makes Bill Gates and Adar Poonawalla co-conspirators to mass murder. If convicted, they face the death penalty. While it is encouraging to read that charges of mass murder are actually being filed against billionaire Globalists for their crimes against humanity for the gene-altering COVID-19 injections, the question remains as to whether or not this case will ever be brought to trial. Does India have the ability to run a covert military operation to extract Bill Gates from the U.S., for example, and bring him to trial in India?(May God be with them all.)

[Screenshot_2021-07-08_06-28-07] The Royal Gibraltar Police Commissioner, Richard Ullger, and the Governor of Gibraltar, David Steel - who is a retired Vice Admiral of the Royal Navy, both were given hard copies of the 95 Theses – Policing The Corona State report by Martin SleuthER, on 7 July 2021. [BigTinyandTheYellowSubmarine] For well over a decade now, the 7th July has been a poignant date for time for me (aka Martin SleuthER) at a personal level. To mark the occasion of this anniversar…

Lock downs are now tied to vaccination status, medical experimentation that echoes the crimes of the Third Reich Dr. Lee Merritt, an orthopedic spinal surgeon, was interviewed by Mike Adams on a recent episode of Brighteon Conversations [below]. Dr. Merritt joins a growing list of medical professionals who see forced vaccines as a holocaust-level crime against humanity. Medical systems are threatening doctors and nurses with termination if they do not comply with the forced vaccines. Univer…

Bill Gates caught on tape admitting mRNA vaccine will change someone's DNA forever... Bill Gates explains that the COVID-19 vaccine will altar our genetic RNA and DNA code. Gates says, “One final way that is new and is promising is called the RNA vaccine. With RNA and DNA, instead of putting that shape in, you put instructions in the code to make that shape.”

@NancyDrewberry Thank-you for all your warmheartedness, encouraging others on to do the right thing, stand for truth.

Was not aware of cheering others on. Just striving to be positive. Striving to live in Love (not the emotion). I often see Love in Justice; that kind of Love the world is sorely lacking presently.

Dr. Reiner Fuellmich has reported that the justice system in Germany is kaput. He has said that in India it (the justice system) is better and was bringing some of his legal suits against the jab to India. So, he may play a part in this law suit. Possibly, even Robert F. Kennedy Jr (speculation on my part) because the justice system in America has failed in so many ways. Where is the justice in America? Cannot even get a duly elected President in office! Hopefully, something good will come of it. Thank-you @Persistent for sharing this good news coming from India. Thank-you for all you do.

Thank-you for the update. Sounds good, hopefully together it will be accomplishes for the good of all concerned and ONLY with God's help will it happen. TWT.