A ‘Hot’ End To The Year In Spain: The Countryside, The Car Industry And Transport On The ‘Warpath’

The situation of the sector and the “inaction” of the government have led the CCOO to call for tomorrow, 22 November, a rally in front of the Ministry of Industry, Trade and Tourism, for which it will bring twenty buses with workers from all the autonomous communities. What the workers are asking the government to do is to act firmly in the face of the changes that are affecting a sector that generates 10% of GDP and more than half a million jobs. While what has been called ‘the perfect storm of the car’ lasts, CCOO is demanding that temporary lay-offs (ERTE) can be activated in those companies that commit to maintaining all jobs.

The countryside is also on a ‘war footing’. The professional agricultural organisations Asaja, COAG and UPA have already announced a “big mobilisations process” at national level, without ruling out “a major demonstration” in Madrid. Although they have not yet given dates, they have advanced that they will be held in many parts of the country during the month of December. And some of them will coincide with those of the hauliers, who have announced a lockout a few days before Christmas.

These mobilisations will be carried out in the face of production costs that have shot up for farmers and stockbreeders to levels “never seen before”. Farmers and stockbreeders denounce the fact that food is becoming more expensive for consumers while they are still not covering their costs. For the moment, these organisations have already launched a national process of mobilisation in the dairy sector to demand fair prices.

The farming organisations have flagged the fact there is a massive closure of dairy farms in Spain, with 6,000 farmers having closed in six years and now just over 11,500 remaining.

The problems in the car industry, the countryside and transport are not the only labour disputes the country is experiencing and will experience in this final stretch of the year. Aside from the government, in the financial sector there are protests against the redundancies announced in institutions such as Banco Sabadell and Unicaja.

Meanwhile, in the industrial sector an indefinite strike has begun this week in the metal industry in the province of Cadiz, which employs more than 20,000 workers.

SPAIN TRUCKERS: To Strike Or Not To Strike

Commuters held up when all access roads into La Linea were blocked by protestors . Unions in Spain have called on the almost twenty thousand workers from the metal industry who work in the province of Cadiz, to strike due to a stall in negotiations over a pay agreement. 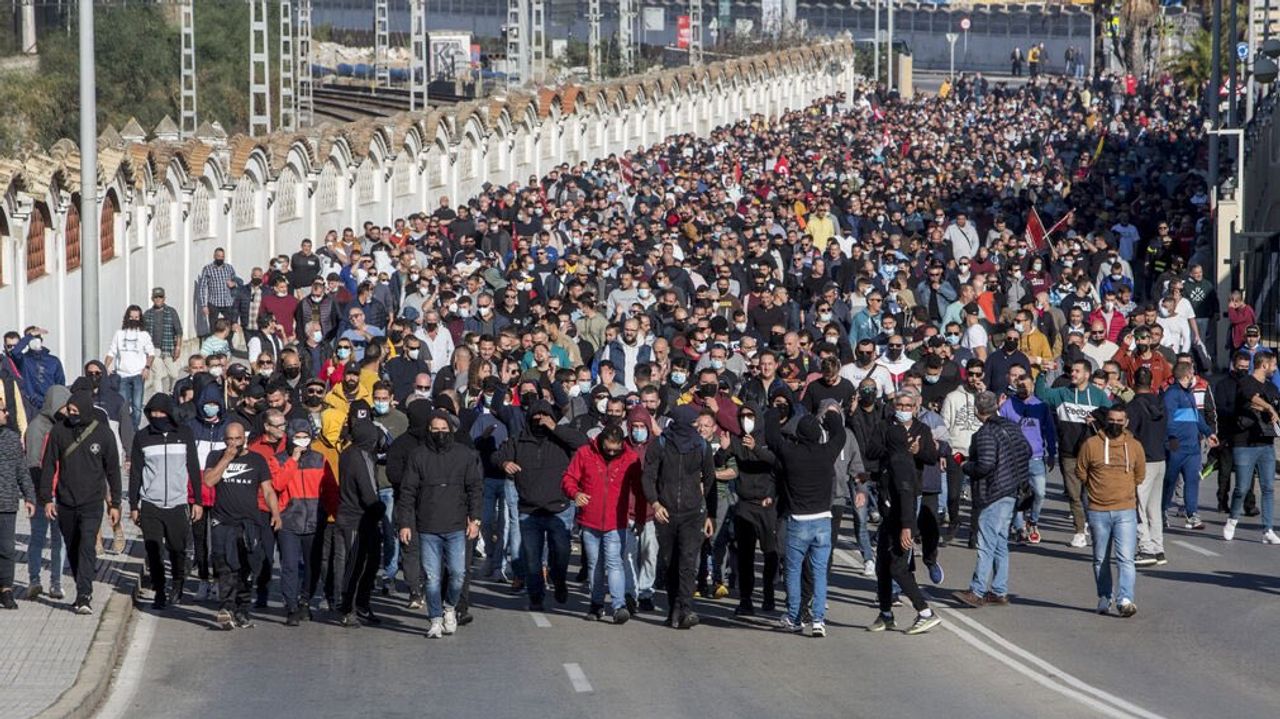 Opposition is growing among workers across Spain to the continual betrayals of these pro-corporate, anti-worker organisations.

Numerous strikes involving hundreds of thousands of workers have been called off by the Spanish unions in the last weeks. This comes after a powerful, week-long strike of 22,000 metalworkers in Cádiz in late November, which rapidly developed into a head-on confrontation with the Socialist Party (PSOE)-Podemos government and their lackeys in the unions.

Terrified by Cádiz metalworkers’ militant struggle, the unions worked to demobilise opposition and end the strike. They served as tools of the PSOE-Podemos government against the working class. During the walk-out, the Podemos-linked Workers Commissions (CCOO) and the PSOE-aligned General Workers Union (UGT) repeatedly issued statements disavowing actions taken to defend the strike.

Faced with an upsurge of the class struggle in Spain and internationally and desperate to prevent another Cádiz, the unions are scrambling to shut down strikes.

Anger is growing among workers to continual betrayals by the anti-worker bureaucracies.

Description of several strikes called off and workers' reactions are described in the article.