Who says Governments don't lie and Politicians are not committing treason against their people over COVID 19? ROBERT KENNEDY JR

Speech of Lawyer Robert Kennedy to Berlin Protesters over the COVID 19 Deception by the NWO:

Over a million wide awake Ordinary concerned German people protested on the streets of Berlin on Saturday 29th August 2020:

Let’s see how the treasonous Politicians deal with the truth:

Should we remind our Politicians they have the right to remain silent before they are arrested and put on trial for treason:

Here is the full written speech of Lawyer Robert Kennedy nephew of JFK who gave a speech in Berlin 50 years ago:

Time to demand your Politicians and Public Health Officials resign now for misconduct in Public Office and for treason against the people:

An Historic Day In Berlin:

It was an historic day in Berlin when Robert F. Kennedy Jr. spoke at the same place as his uncle John F. Kennedy did in 1962.

Saturday, 29 August 2020, must be in the history books as an historic day for the ‘freedom’ of Europe.

We have to see it in a broader context.

The COVID-19 lockdown and harsh measures are the last things it needed to explode. Europe, especially Germany, is involved in many wars in the Middle East.

Also, a lot of refugees came to Germany in 2015, approximately one million or more, and they’re still coming.

On top of this, all the restrictions, is the rising crime in the big cities due to Arab clans, refugees, and now because of the youth who have no perspective whatsoever, due to the so-called COVID-19 pandemic.

It’s enough on top of the COVID-19 lies!

Also, the right to demonstrate was an issue, and how come Germany and for that matter the whole of the EU are supporting demonstrations in Belarus without speaking about masks and hygiene rules?

Also, the lies of the EU, the massive lies in the MSM that all demonstrators are Nazis or ‘Reichsburgers’, needs to be debunked.

The majority are NORMAL, good obedient, citizens who have had enough of the lying Corona-politics.

COVID-19 is politicized and far beyond the reality of a pandemic!

Also, Europe, and especially Germany, should be ashamed for not welcoming the nephew of an important US president, John F. Kennedy, who was murdered, as was his brother Robert F. Kennedy Sr.

Robert F. Kennedy Jr. came on the invitation of ‘ärtze fur äufklarung’ to Germany and gave an historic speech which gave the citizens of Europe courage to fight for real freedom!

'The newspapers in the US are claiming I came to Berlin to speak to 5000 Nazis and when I will return, they will write I spoke to 8000 Nazis.

But when I look at the crowd, I see no Nazis. I see people who want real democracy and freedom!

People want leaders who don’t lie to them!

Leaders who will not orchestrate rules and measurements to control the population.

We want health officials who have no financial connection to the ‘Big Pharma’.

We want health officials who care for our children and us, but not for the governments and ‘Big Pharma Companies’!

I look at this crowd and see all the flags of Europe!

I see people of every color, every religion, and every political party.

All they care about is human dignity, about children’s health and political freedom, which is the opposite of Nazism.

They ‘love’ pandemics for the same reason they ‘love’ war!

Because, it gives them the ability to control the population, which a population, otherwise, would never accept!

The great instruments for imposing fear and obedience.

I am going to tell you something.

It’s a big mystery to me why all of the so important people like Bill Gates and Tony Fauci have been planning this pandemic for decades, and when it comes we will all be saved!

But now it’s here, they don’t seem to know what they are talking about!

It seems they are making it up as it goes along.

They are making up numbers and figures and actually they can’t tell you the fatality rate of COVID-19!

Also, they can’t give us a PCR test that really works!

They change the cause of deaths on many death certificates, to make it look more dangerous.

The one thing they are good at is pumping up fear!

Seventy-five years ago Hermann Göring was asked at the Nuremberg war trial, “How did you make the German people go along with all this”?

He said it’s an easy thing and has nothing to do with Nazism, it has to do with human nature.

The only thing a government has to do to make people slaves is to create fear!

If you can figure out anything to give them fear, they will do everything you want!

Fifty years ago, my uncle John F. Kennedy came to this city.

Today everybody who is here can proudly say again ‘ICH BIN EIN BERLINER’! because you are again the frontline against totalitarianism.

I want to say one more thing.

They didn’t do a very good job about protecting public health.

But they did a very good job, during the quarantine, they brought 5G to all our communities and to shift us all to a digital currency, which is the beginning of slavery!

We all see these advertisements on your TV or computer, 5G is coming to your community, it’s going to be a great thing for all of you.

It’s very convincing, I have to say!

When I look at those ads, I think it’s great, I can hardly wait till it gets here, because I will be able to download a video game in six seconds instead of sixteen seconds!

They are spending five trillion dollars on 5G, the reason is for surveillance and data harvesting.

It’s not for you and me, it’s for Bill Gates, for Jeffrey (Mark) Zuckerberg, Bezos and all the other billionaires!

Bill Gates is telling us that his satellite can see you twenty-four hours a day.

That’s just the beginning, he can follow you also, on your smarthphones twenty-four hours a day, by bio-metrical face recognition and GPS.

The pandemic is a crisis of convenience for the elites who are dictating these policies!

It gives them the ability to ablate the middle-class and to destroy the institutions of democracy.

To shift all of our wealth to a couple of billionaires to make themselves rich by impoverishing the rest of us!

The only thing between them and our children is this crowd who has come to Berlin. 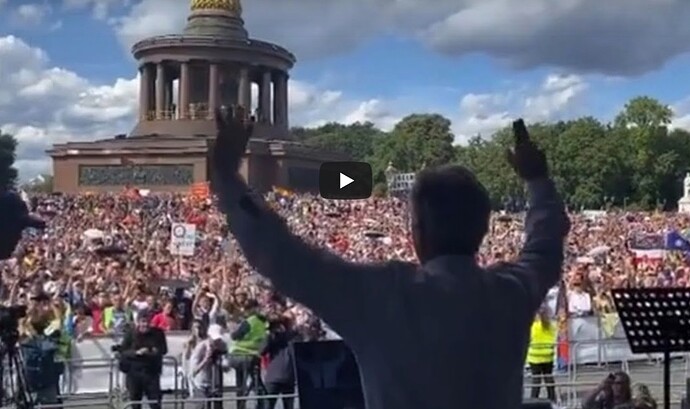