Bearing Witness to Vaccine Injury in the UK – VACCINEINJURY.UK

There are two sides to every story. But when one side is not only blocked but also suppressed, is TRUTH found?

We've been inundated with coordinated propaganda from authorities – political, health, NGO and media – to guide us to believe only their side – vaccines are safe. Hearing only one side in a courtroom wouldn't be allowed; and it shouldn't be allowed in our daily lives.

The truth is Brits are being harmed from all kinds of vaccines as reported by Vaccine Injury UK. While you probably didn't hear about this vigil in June – and it was small compared to some other protests in London – its message was BIG. 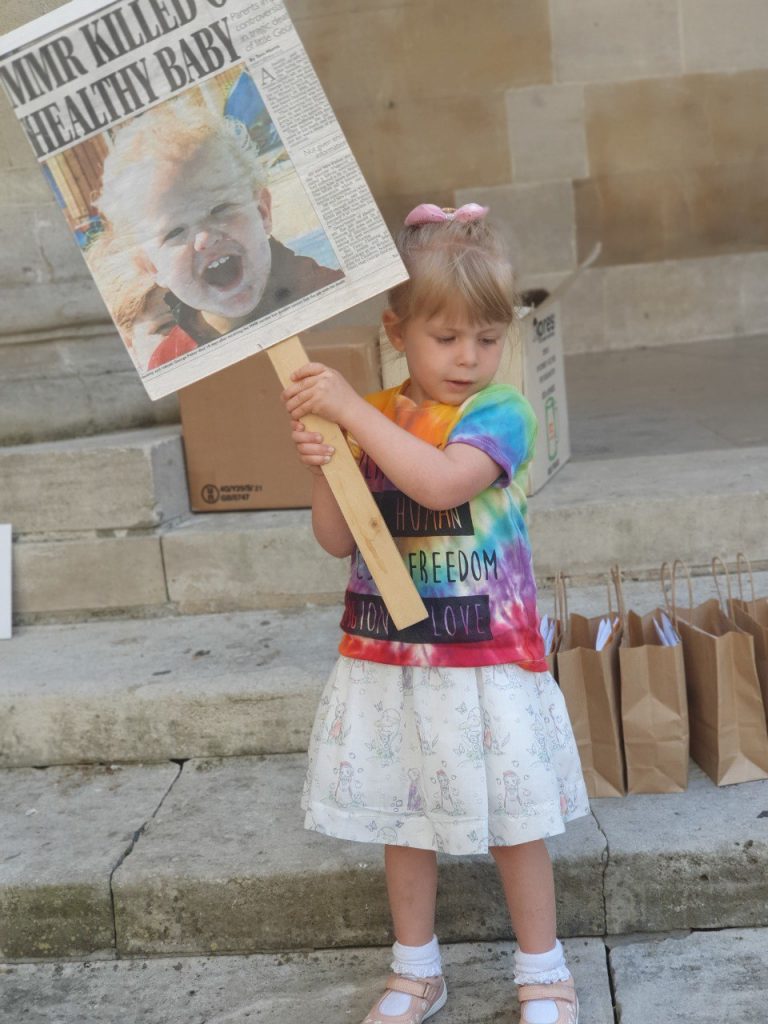 Jasmin’s uncle, Georgie Fisher, died before she was born: International Vaccine Injury Awareness Day is a day of joint support

The UK Vaccine Injury community has peacefully marked 3rd June since 2016. Last year, we delivered documents to the Department of Education, the MHRA and the DWP. This year we held a vigil near the BBC, displaying evidence of harm such as over 200 dark glasses, for example, representing UK reports to MHRA of 212 cases of blindness after a Covid vaccine.

The MHRA have received over 1,200 reports of death soon after a COVID vaccine, 8 every day on average... It’s worth noting that the MHRA’s medicines regulation is fully funded by the pharmaceutical industry. 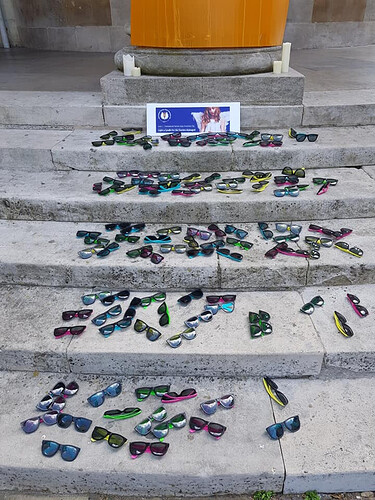 Vaccine Injury UK's Louise Fisher – Not On The BEEB with a 10-min report on the vigil not covered by the BBC. This YT channel has over 4000 subscribers but so far this nicely-done video is the only video up. 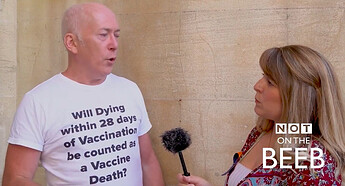 It is up to us to search for the truth.

While we won't find the thousands upon thousands of adverse reactions highlighted in mainstream media – alternative news sites like the Daily Expose, keep up on the Medicines and Healthcare Products Regulatory Agency (MHRA) reports. Vaccine Impact reports on the European Union database EudraVigilance.

Authority does not equate with truth, but Truth should be Authority.

Are Gibraltarians brave enough to share their vaccine adverse reaction stories? We know they are happening; and are being shared privately as Gib is a small connected community.

Think about the Parable of the Persistent Widow Luke 18:1-8. Will The Son of Man also avenge the Persistent Mothers, Brothers, Sisters, Dads and Friends of victims of vaccine injury?

Thank-you @DOTS ,
Yes, The Son of Man will avenge those who are persistent. 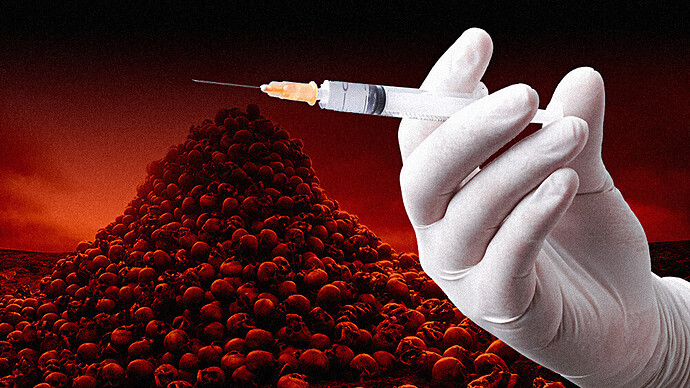 A medical research group in the U.K. pointed out that the Wuhan coronavirus (COVID-19) vaccines are “unsafe for humans” based on adverse event reports. Scientists and doctors looked at data from the British government’s Yellow Card vaccine event reporting system. They found that the “overwhelming” number of adverse reactions from COVID-19 vaccines definitely raised alarm bells.

The Yellow Card system is the British equivalent of the Vaccine Adverse Event Reporting System (VAERS) in the U.S. The system is run by the Medicines and Healthcare Products Regulatory Agency (MHRA). Through the Yellow Card system, the MHRA keeps track of COVID-19 vaccines on an ongoing basis “to ensure their benefits continue to outweigh any risks.”

Lawrie wrote in her letter that between Jan. 4 and May 6 of this year, a total of 888,196 adverse events and 1,253 deaths were reported to Yellow Card. Similar to VAERS data, these were not directly proven as correlated with the COVID-19 vaccine. Despite this, the EMBC director raised safety concerns for those getting the vaccine. She wrote that given the Yellow Card figures, “the MHRA now has more than enough evidence … to declare the COVID-19 vaccine unsafe for use in humans.”

In a later interview with TrialSiteNews, she described the total number of cases as “concerning” and called for follow-ups on persons who reported adverse reactions “to ensure there are no further problems.” Lawrie said: “The scope of morbidity is striking, evidencing a lot of incidents and what amounts to a large number of ill.”

Lawrie also lamented that Yellow Card was “incredibly opaque” during her TrialSiteNews interview. She shared that researchers are unable to filter vaccine safety incidents by age, gender or other attributed. According to the EbMC director, about 60 percent or more of COVID-19 vaccines in the U.K. came from AstraZeneca, with the remainder from the Pfizer/BioNTech vaccine.

The letter called on the MHRA to urgently make reports of vaccine adverse reaction public, given that pharmacovigilance data is known to be subsequently under-reported. It also called on the regulator to assist people with reporting adverse reactions. (Related: British mainstream media insists coronavirus vaccines are effective even though most covid deaths now occur in vaccinated people.)

Lawrie concluded the letter: “Preparation should be made to scale up humanitarian efforts to assist those harmed by the COVID-19 vaccines, and to anticipate and ameliorate medium to longer term effects. As the mechanism for harms from the vaccines appears to be similar to COVID-19 itself, this includes engaging with numerous international doctors and scientists with expertise in successfully treating COVID-19.”

But according to an article published in late June 2021, vaccine deaths and adverse reactions are no cause for alarm. It even argued that people who died from COVID-19 vaccines served as proof of their effectiveness. (Related: The Guardian says people dying from covid vaccines is “proof” that they work.....

A medical research group in the U.K. pointed out that the Wuhan coronavirus (COVID-19) vaccines are “unsafe for humans” based on adverse event reports. Scientists and doctors looked at data from the British government’s Yellow Card vaccine event...

Nearly 4,000 women report menstrual problems including heavy bleeding and delayed periods after getting their Covid vaccine – but watchdog insists there's no proof jabs are to blame 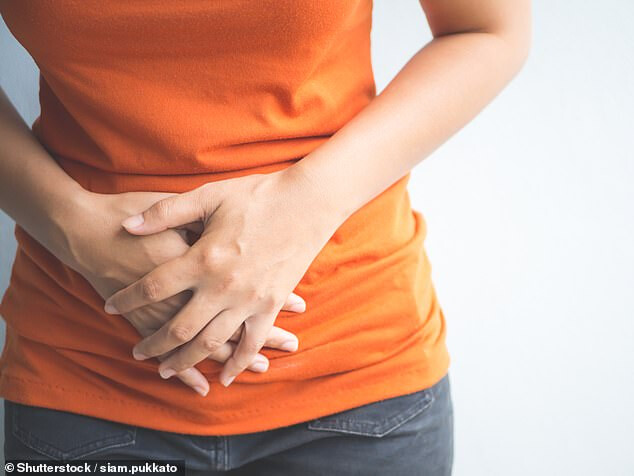 The issues, which have typically involved 'heavier than usual' bleeding or a delayed period, have primarily affected women aged between 30 and 49.

The Medicines and Healthcare products Regulatory Agency (MHRA) said it had received 2,734 reports linked to the AstraZeneca jab up to May 17.

Another 1,158 reported menstrual changes after receiving Pfizer's and a further 66 were linked to the recently deployed Moderna jab.

Experts said the number of women suffering from period problems will 'definitely' be higher because many don't take the time to report them through official channels.

The figures, obtained by the Sunday Times, have raised questions about why menstrual changes are not included on the MHRA's list of potential Covid jab side effects.

But the regulator said a review into the issue concluded that the symptoms were not happening more frequently in newly vaccinated women than the general population. It said it would continue to 'closely monitor' the situation..... 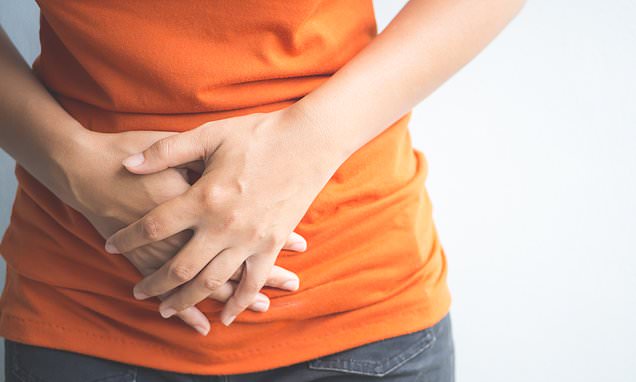 Nearly 4,000 women suffer period issues after getting their Covid jab

The UK regulator, the MHRA, said it had received 2,734 reports linked to the AstraZeneca jab, 1,158 related to Pfizer's and 66 to the recently deployed Moderna jab.

Vaxxed Documentaries: The Truth about ALL Vaccines Vaccines

VAXXED 2: THE PEOPLE’S TRUTH is a Must-Watch It is the sequel to "Vaxxed: From Cover-Up to Catastrophe". If you read or watch nothing else in this post, watch Vaxxed 2 – linked above on Brighteon. ABOUT BOTH DOCUMENTARIES: Vaxxed: From Cover-Up to Catastrophe (https://vaxxedthemovie.com/) In 2013, biologist Dr. Brian Hooker received a call from a Senior Scientist at the U.S. Centers for Disease Control and Prevention (CDC) who led the agency’s 2004 study on the Measles-Mumps-Rubella (MM…

British health chiefs have quietly released a warning that Pfizer and Moderna's Covid vaccines may cause heart damage, MailOnline can reveal.

Fears about the mRNA jabs' links to myocarditis have grown in recent weeks, following a string of cases in young adults and children in Israel and the US.

Now the UK's drug watchdog has updated its safety information to accept that the condition is a possible side effect of both vaccines, without a formal announcement.

The Medicines and Healthcare products Regulatory Agency insists the complication – inflammation of the heart muscle which can damage the organ over time – is still 'extremely rare' and 'typically mild'.

But it wasn't listed as a potential side effect until last week, when the MHRA released its most up-to-date safety surveillance data.

Cardiologists say the benefits of both jabs still clearly outweigh the risks for the vast majority of the population.

However, they say it 'completely changes' the debate about vaccinating children in Britain. They won't get AstraZeneca's jab because of its links to deadly blood clots in young people. 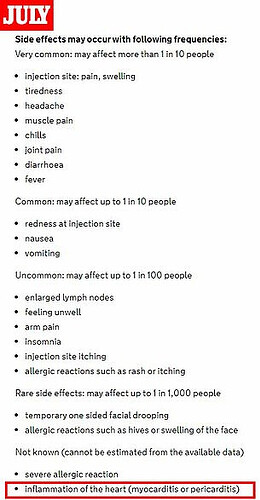 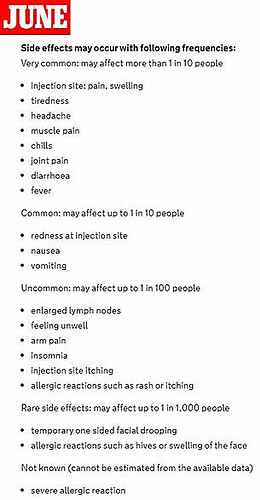 The UK's drug safety watchdog has updated its safety information to accept that myocarditis is a possible side effect of both vaccines (left). The MHRA insists the complication – inflammation of the heart muscle that can damage the organ over time – is 'extremely rare' and 'typically mild'. But it wasn't listed as a potential side effect until last week (pictured right, a screenshot of the same site last month), when the agency released its most up-to-date safety surveillance data. 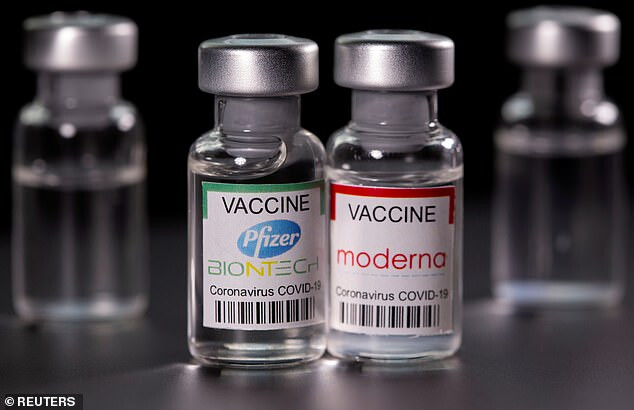 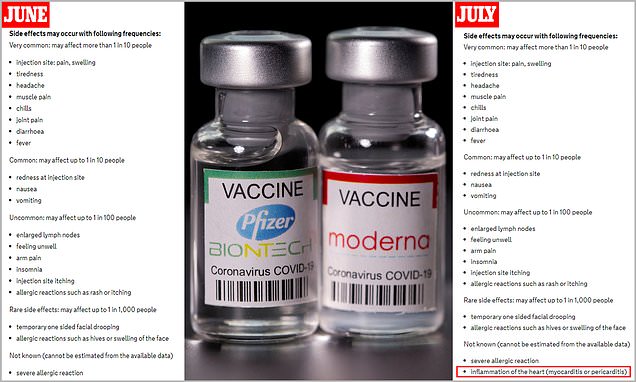 Scientists had expected the protection given by vaccines to begin to wear off over time but they don't yet know how long immunity from jabs lasts for. Pictured, a stock image of jabs made by Pfizer and Moderna

MHRA statistics dated up until June 23 show 60 cases of myocarditis have been spotted among Pfizer vaccine recipients.

There have also been 42 cases of pericarditis – a similar condition that affects the protective layer around the heart.

Five instances of myocarditis and two of pericarditis have been detected in over-18s given Moderna's vaccines, the same figures show........