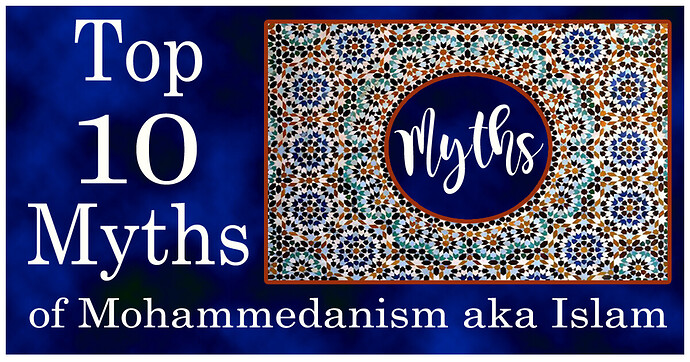 In 2015, A. Freeman penned “The Top 10 Myths That Dominate Christianity“. Now, he’s turned his focus on the myths of Islam.

by A. Freeman, guest writer Sura 3:24 This because they say: The Fire shall not touch us but for a few numbered days”: for their forgeries deceive them as to their own religion. Much like the Feder…

In the latest article on Time To Think entitled, “The Top 10 Myths that Dominate Mohammedanism aka “Islam"”, A. Freeman examines how what should have been Islam turned into Mohammedanism, moving away from Holy Koran teachings to fabrications based on hear-say (the Hadith).

If this sounds like a hard-hitting piece, it is; but it is jam-packed with Holy Koran references to back up the compilation. While one can study all the hyperlinked scripture references from The King of kings’ Bible, the article lays out the falsehoods in simple, logical terms.

A. Freeman did a thorough job in bringing together an insightful look into these myths. Let’s take it from here and be thorough in sharing it with others who could benefit from this piece.

Please consider this post on Defending-Gibraltar an announcement that the article has been published; and thus, please direct people, groups, and organizations that you share it with to its proper link so that they can read it in its entirety:

The Top 10 Myths that Dominate Mohammedanism aka “Islam"

The shortlink to this article is https://wp.me/p2TF2i-17M

A. Freeman posted the article on Vigilant Citizen Forum. What’s interesting is Daze wanted to argue for argument’s sake.

Daze said: To be honest i don’t read posts that usually contain more then a page. If i have to scroll i will usually skip. Attention span of a gold fish and all of that.

A. Freeman responded: Thank-you for your honesty in admitting you are arguing against what was posted from a point of complete ignorance.

Daze said: My reactions aren’t emotional. Truth be told Islam doesn’t need me to defend it. The Almighty doesn’t need a single Muslim to propagate his path.

A. Freeman responded: If you haven’t read the article, then your reaction cannot be based upon reason and common-sense. And yes, truth be told, the organized religion that calls itself “Islam” doesn’t need you or any other so-called Muslim to defend it, because it – like ALL organized religions – was created by Lucifer/Satan/Iblis to keep people away from God.

The Top 10 Myths that Dominate "Islam"

For those with the courage to take an honest look at the organized religion that calls itself "Islam", for everyone's benefit, please see the article at the following hyperlink:- The Top 10 Myths that Dominate Mohammedanism aka “Islam” Sura 3:24...

If I may, because I lived and worked in a Gulf country for 4 years, where I encountered persons from all over the Arab and Muslim world, and I obviously support this forum, so I have a bit of empathy all round:

And I suspect that this could be interpreted as being a bit personal and anti-Arab:

Muad'Dib Who is the owner of this forum, is famous for His brilliant 77 Ripple Effect movie, which irrefutably proves that the falsely accused Muslims of the 7th July 2005 London bombings definitely did not carry out those bombings, and that it was in fact the Mossad along with people from the British establishment who are the real murderers; particularly the 3rd version.

But more: the 3rd version is now out with very high quality - as I'm told - Arabic subtitles, with which several Arab speaking persons were involved in the making of it.

The movie can also be found via the Muad'Dib - Teacher of Righteousness link at Christs.net. This forum is also linked there.

But that's not all; an Arabic version of The Way home or face The Fire is being worked on now, which is obviously a significantly more challenging task.

The misunderstandings and misconceptions between peoples are so huge, and also within and between the organised religions, as the referred article strives to convey just some of it, that it may be worthwhile to sow some seeds of unity here - if it will help at this very late stage:

Apart from everyone on this whole Earth being related (TWh 11:37 - below), and it's prophesied that at least someone from every race and tongue will stand before the Throne of God (Rev. 7:9, Sura 5:72), the Saxons, Arabs and Indians/ Pakistanis etc., are all closely bodily related!! Just one of the facts that have been kept hidden, to divide, conquer and rule this planet. Even Darth Vader, who represents the Ashkenazi counterfeit Jew Jesuit Black Popes, turns to the Light in the end.

The Way home or face The Fire 11:37 The only REAL difference between you all, is that a few of you believe in God, and MOST of you don’t believe in God, neither of which is any good. God doesn’t want you to BELIEVE “in” Him, He wants you to believe Him and get to KNOW Him (John 17:3). Not only are you NOT Jewish; Christian; Moslem; Buddhists; Hindus; Sikhs; etc., you are not even human — you are from Venus, and are allowing Satan to fool you all, with his lies (John 8:32 / King of kings’ Bible, John 8:23). 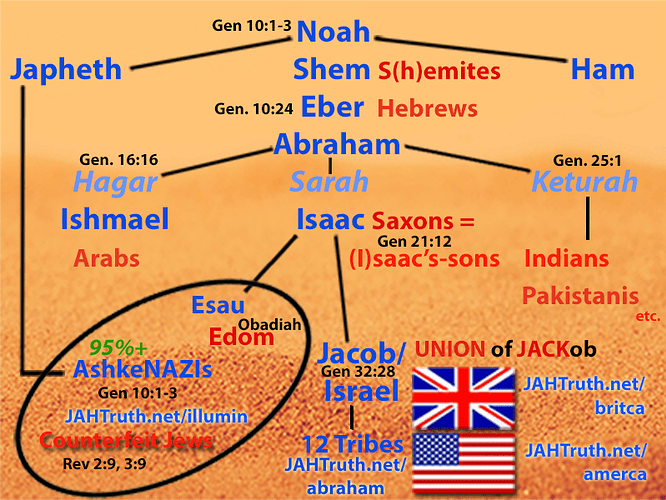 How many know that the layout of the 7th July London murder-bombings mimicked - and was obviously perpetrated by - the Synagogue of Satan (Mossad) (Rev. 2:9, 3:9) crucifixion of Christ, which was falsely blamed on Musims??

The 77 Ripple Effect version 3A - with Arabic subtitles. 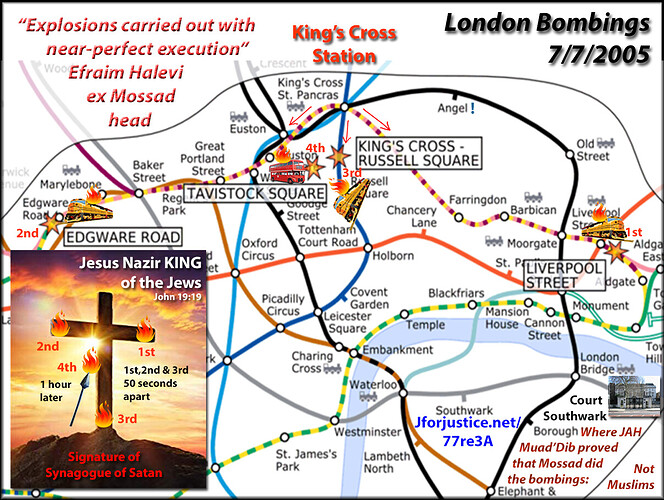 The article itself is NOT meant as a hit piece against any individual or the people from any ethnic group, nation, or culture, etc.

It was shared out of love and in truth for all of those who may have been deceived by the death cult/organized religion known as “Islam” which, like its predecessors Talmudic Judaism and “Christianity”, has absolutely nothing to do with the Holy Scriptures, other than to use and abuse God’s name. Anyone who is part of any organized religion on Judgment Day (soon) will burn for it, as we are warned of in the Holy Koran (Quran) at least 300 times. It’s the lies that are murdering people, not the truth exposing those lies.

As you pointed out from The Way home or face The Fire (the little book prophesied to be delivered during the end-times by the Messiah/Christ/Mahdi - Rev. 10:6-10), people need to stop dividing themselves up into all of these different groups, and recognize that in reality, we are not even human! We are, in fact, spiritual-Beings (souls/jinns) that have been placed inside of these human bodies we see in the mirror to learn how to be good, like God (Gen. 1:26).

Until everyone gets rid of their religious superstitions, political affiliations, cultural beliefs/man-made traditions and the rest of the corporate-fictional, worldly constructs that have deceived us all (Rev. 12:9) – and go back to God, believing ALL of His Word and keeping His Law ONLY – we will never be able to unite as a single brotherhood of believers, determined to do God’s Will, exactly as it instructs every Real Muslim to do in the Holy Koran (Quran). How can there ever be peace on Earth until that happens?

@A_Freeman's article is a good study piece. It gives equal time to the myths of Mohammedanism because A_Freeman already listed out 10 myths of Christianity.

As sons and daughters of Abraham, Christians and Muslims do not follow The Straight Way or The Example of how they have to be to enter the Kingdom of God.

So, without getting derailed, we invite you to read both articles on Time To Think:

by A. Freeman, guest writer Much like the Federal Reserve Bank is NOT Federal, has NOTHING in reserves and is actually a private corporation instead of a bank, Christianity is a misnomer, designed …

by A. Freeman, guest writer Sura 3:24 This because they say: The Fire shall not touch us but for a few numbered days”: for their forgeries deceive them as to their own religion. Much like the Feder…

And importantly, we really need to learn from Christ The Mahdi in the here and now:

How to Apply The Passover, Feast of Unleavened Bread, Crucifixion and Resurrection Today "The Song of The Lamb"/ Christ

The Passover is a very important time to consider both Passovers and what they really mean, or should mean, to each of you. What everyone needs to think about is how the crucifixion applies to The Passover, because the animal substitute sacrifice was replaced by daily [Self]-sacrifice. You therefore cannot sacrifice a lamb and paint its blood on the door-posts and lintel of your house, but must apply the crucifixion instead, by metaphorically painting your house/body with the blood of the Lamb…