The 2020 Christmas Speech from the "Queen"

For those who have been wondering what to expect in the upcoming year, your wait is finally over, as the woman temporarily ruling over the people Israel (Isa. 3:12) has again addressed the world in her trademark Orwellian double-speak .

Full text of speech taken from:

QUEEN ELIZABETH II delivered her 2020 Christmas speech today, a pre-recorded message to the British public taking stock of the year and looking ahead to the future. Express.co.uk has compiled the Queen's Christmas speech 2020 in full.

Notes added to assist in “reading in between the lines”.

"Every year we herald the coming of Christmas by turning on the lights. And light does more than create a festive mood - light brings hope.

"For Christians, Jesus is ‘the light of the world’, but we can’t celebrate his birth today in quite the usual way.

Note: The Truth about Christmas is it’s a pagan festival that has absolutely nothing to do with Christ. And the Christmas lights are intended to marginalise and replace the Light of the World rather than honour Him.

"People of all faiths have been unable to gather as they would wish for their festivals, such as Passover, Easter, Eid and Vaisakhi. But we need life to go on.

Note: Isn’t the reason people haven’t been able to gather precisely because Elizabeth and her filthy rich family and friends have foisted their plan ned medical and economic tyranny on us? Is her “we (Elizabeth & Co.) need life to go on” not a thinly-veiled threat of their planned depopulation agenda, which t.h.e.y. have relabeled as “the Great Reset” that son Charles has been sent out to promote?

“Last month, fireworks lit up the sky around Windsor, as Hindus, Sikhs and Jains celebrated Diwali, the festival of lights, providing joyous moments of hope and unity - despite social distancing.”

"Remarkably, a year that has necessarily kept people apart has, in many ways, brought us closer.

"Across the Commonwealth, my family and I have been inspired by stories of people volunteering in their communities, helping those in need.

"In the United Kingdom and around the world, people have risen magnificently to the challenges of the year, and I am so proud and moved by this quiet, indomitable spirit.

“To our young people in particular I say thank you for the part you have played.”

Note: Someone who is “indomitable” will never stop fighting to keep from being dominated by evil. How could the public almost universally agreeing to be imprisoned within their own homes, have their businesses destroyed and wear oxygen-depriving face nappies be described as having an “indomitable spirit”?

"This year, we celebrated International Nurses’ Day, on the 200th anniversary of the birth of Florence Nightingale.

As with other nursing pioneers like Mary Seacole, Florence Nightingale shone a lamp of hope across the world.

"Today, our frontline services still shine that lamp for us - supported by the amazing achievements of modern science - and we owe them a debt of gratitude.

Note: Is this a transparent claim of ownership of the nurses being used to infect, poison, sterilize, cripple and murder as many as possible through the corporate medical and pharmaceutical industries vaccines and treatments, so that death and destruction can be rebranded as a “lamp for us” to further diminish The Word (Ps. 119:105)?

“We continue to be inspired by the kindness of strangers and draw comfort that - even on the darkest nights - there is hope in the new dawn.”

"Jesus touched on this with the parable of the Good Samaritan. The man who is robbed and left at the roadside is saved by someone who did not share his religion or culture. This wonderful story of kindness is still as relevant today.

"Good Samaritans have emerged across society showing care and respect for all, regardless of gender, race or background, reminding us that each one of us is special and equal in the eyes of God.

"The teachings of Christ have served as my inner light, as has the sense of purpose we can find in coming together to worship.

Note: If Christ’s Teachings truly served as her inner light, then why does Elizabeth openly defy Him?

Christ said it’s impossible to serve God and materialism (Matt. 6:24) and that The Law God gave us – which Elizabeth swore to do her utmost to maintain – will NEVER go away (Matt. 5:17-20). So how is unlawfully multiplying her money, power and material possessions (Deut. 17:14-20) to become the wealthiest human on planet Earth, while many of her subjects starve and/or don’t have a roof over their heads, somehow following Christ’s Teachings? Does that sound like a “Good Samaritan” to you?

“In November, we commemorated another hero - though nobody knows his name. The Tomb of the Unknown Warrior isn’t a large memorial, but everyone entering Westminster Abbey has to walk around his resting place, honouring this unnamed combatant of the First World War - a symbol of selfless duty and ultimate sacrifice.”

“The Unknown Warrior was not exceptional. That’s the point. He represents millions like him who throughout our history have put the lives of others above their own, and will be doing so today. For me, this is a source of enduring hope in difficult and unpredictable times.”

Note: Is this not yet another cryptic inference to depopulation, through wars and vaccines, where Elizabeth expects the “useless eaters” and cannon fodder to sacrifice themselves to save her and the rest of the parasitic criminal class? Is she telling everyone she is the power behind the rigging of the U.S. presidential election in November, which she hopes will accelerate WW3, thereby killing off millions (billions really) of those considered to be nameless and faceless, just like the “unknown warrior”?

"Of course, for many, this time of year will be tinged with sadness: some mourning the loss of those dear to them, and others missing friends and family members distanced for safety, when all they’d really want for Christmas is a simple hug or a squeeze of the hand.

"If you are among them, you are not alone, and let me assure you of my thoughts and prayers.

Note: How could the head of the new world order, who is the driving force behind the CV-1984 plandemic AND the greatest electoral fraud in history, feign empathy?

"The Bible tells how a star appeared in the sky, its light guiding the shepherds and wise men to the scene of Jesus’s birth. Let the light of Christmas - the spirit of selflessness, love and above all hope - guide us in the times ahead.

Note: How can the alleged “defender of the faith” not know that the pagan celebration of Christmas is a LIE, which is condemned in the Bible by Christ Himself (Rev. 2:6, 15), because it doesn’t have anything to do with the Bible or with Christ?

Is she similarly unaware that it took the wise men two years to travel from the British Isles to Bethlehem, where they found the young CHILD Jesus in a HOUSE, rather than a newborn baby in a manger? Or are these oversights intentional?

“Artists use lies to tell the truth, while politicians use them to cover the truth up .”

“It is in that spirit that I wish you a very happy Christmas.”

Note: How could anyone trust someone who committed fraud to gain the British Monarchy, and who continues to commit fraud to increase her personal wealth and holdings at the expense of everyone else, fraud to change the rules in favour of the rich by fraudulently giving “royal assent” to unlawful, made-up legislation, and who wishes others to be happy with all of these lies?

Doesn’t the Bible tell us exactly what spirit the pretended queen is using against us?

Ephesians 6:12 For we wrestle not against flesh and blood, but against principalities, against powers, against the rulers of the darkness of this world, against spiritual wickedness in high [places].

The TRUE Christmas Story is that the fake queen’s reign of terror is almost at its end.

Luke 1:31-32
1:31 And, behold, thou shalt conceive in thy womb, and bring forth a son, and shalt call his name JESUS (Saviour).
1:32 He shall be great, and shall be called the Son of The Highest: and the Lord God his Father shall give unto him the Throne of David (the British Throne):

I noticed that their “great reset” does not include redistribution of their wealth or assets, just everyone else’s. No surprises there.

Is she similarly unaware that it took the wise men two years to travel from the British Isles to Bethlehem, where they found the young CHILD Jesus in a HOUSE, rather than a newborn baby in a manger? Or are these oversights intentional?

It seems that the 1950s and 2020 have another connection – the NUMBER SEVEN. In the article about the Final Overturn of The Stone, The Declaration of Scotland is included because it explained why the four Scottish nationalists chose Arbroath Abbey to deposit the “so-called” stone. Ian Hamilton even said, it was a fitting place, because the declaration, written at the Abbey, read, “We fight not for glory, nor for wealth nor honour, but only and alone for freedom, which no man surrenders but with…

Rev. 2:6 But this thou hast, that thou hatest the deeds of the Nicolaitanes (followers of Santa [Ni]-Claus - Yuletide, Easter [Ishtar - a goddess of fertility - eggs a symbol of fertility] etc.),which I also hate.

2:15 So hast thou also them that hold the doctrine of the followers of St. [Ni]-Claus (Yuletide), which thing I hate. 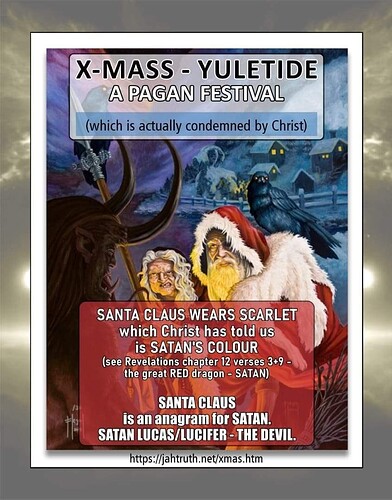 Jeremiah 10:3 For the customs of the people [are] vain: for [one] cutteth a tree out of the forest, the work of the hands of the workman, with the axe.
10:4 They deck it with silver and with gold; they fasten it with nails and with hammers, that it move not.