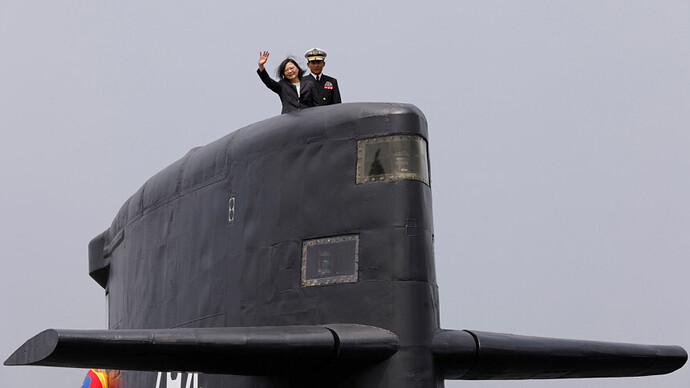 For more than two decades, Taiwan tried to buy a fleet of modern conventional submarines to fend off an existential threat – invasion by China. There were no takers.

"Commodore Ian McGhee, a former senior officer in the British navy, and Gavron Ltd., an Israeli company based in Gibraltar, have played a significant role by supporting Taiwan’s submarine program." – According to this additional article: Taiwan initiates movement to develop indigenous submarines, disregarding Chinese opposition and pressure

For more than two decades, Taiwan tried to buy a fleet of modern conventional submarines to fend off an existential threat – invasion by China. There were no takers.

Now, as China under President Xi Jinping steps up its military intimidation of Taiwan, an array of foreign submarine-technology vendors, with the approval of their governments, are aiding a secretive program to build subs in Taiwan. Taipei has stealthily sourced technology, components and talent from at least seven nations to help it build an underwater fleet with the potential to exact a heavy toll on any Chinese attack.

United States, has provided key technology, including combat-system components and sonars. But assistance is coming from far beyond America.

Defense companies from the

United Kingdom, which like America operates a fleet of nuclear-powered ballistic missile and attack submarines, have provided crucial support.

A veteran of Britain's Royal Navy submarine fleet, retired Commodore Ian McGhie, was a key figure in the drive to recruit submarine expertise, according to a person familiar with his role. McGhie helped a

Britain also has approved multiple export licences in the past three years for UK companies to supply submarine components, technology or software to Taiwan, according to information from the Department for International Trade obtained via a Freedom of Information request.

The value of submarine technologies approved for export from the UK to Taiwan has grown exponentially in recent years.

“We all gathered together to defeat the demon"

It hasn't been that easy for Taiwan to build its fleet of submarines.

Taiwan searched for the technology to build these submarines internationally and very secretively, for many years as they came across problems procuring help from countries whilst China lurked in the backround.

In 2001 the United States made a deal with Taiwan, as part of a larger arms deal to supply conventional subs, yet the American ship yards had not built something like that in decades, and were not able to deliver. The US's entire fleet is nuclear, and Taiwan was cut out of the deal.

A German corporation backed out of a deal when the lobbyists of its parent company's extensive business interests with China got in the way.

Taiwan's efforts to obtain subs suffered as other nations feared the repercussions of China. Beijing downgraded their relationship with the Netherlands, who, in the 1980's supplied Taiwan with the Sea Dragon Subs. Eventually signing an agreement with China stating it would not approve new military export of goods with Taiwan.

Tokyo a US ally, didn't want to get involved with Taiwan according to two defense ministers, amidst concern on how China might react.

Many of it's consultants come from the British Royal Navy, including McGhie, who recruited engineers to work on the Taiwan project, and assisted a Gibraltar Company in securing a multi million pound complex technical services to a to a Client in the heavy industry sector in the Far East.”

McGhie was the commander of British forces in Gibraltar until 2016, and was part of a team that “devised, negotiated and delivered” the U.K.’s first National Cyber Security Program, a £650 million project, while he was at the Office of Cyber Security in Britain’s Cabinet Office. Lockheed Martin and Raytheon are on board to supply the sonar for Taiwan.

QinetiQ from Britain will supply advice on underwater safety management.
A Canadian subsidiary of Britain’s BMT Group Ltd. has also been involved, to provide consulting and engineering advice..

As Taiwan pushes to complete the first vessel by 2025, the two people with knowledge of the program said their main concerns are delays to the import of equipment because of COVID-19 and possible pressure on suppliers by China.

For now, the multinational effort is holding. A person in Taipei with knowledge of the project likened it to the Japanese folktale Momotaro, in which a lone boy gets help from a group of unlikely allies — a dog, a monkey and a pheasant — to defeat a terrifying demon. Taipei has stealthily sourced technology, components and talent from at least seven nations to help it build a fleet with the potential to exact a heavy toll on any Chinese attack.