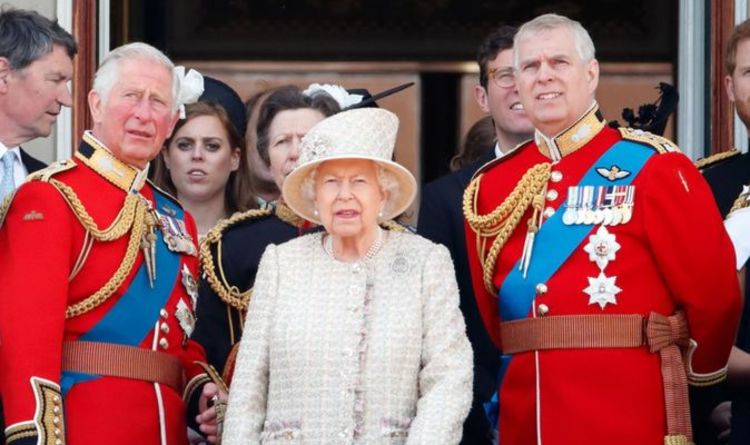 PRINCE Charles is reportedly planning on turning Buckingham Palace into a royal museum, as he and other senior royals don't have "much of an affection" for the Queen's London residence, an expert has claimed.

I'm so sick of these royal perverted, satan-worshipping, pedophile, murderers. 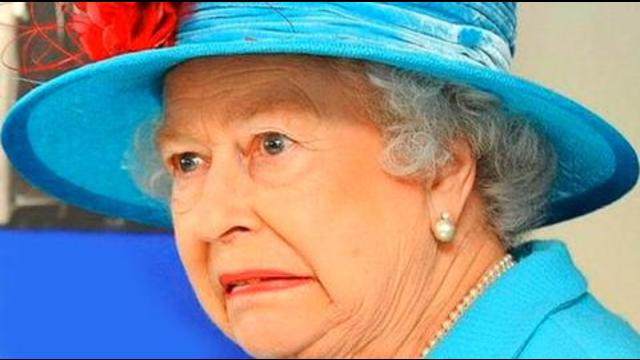 The Dirty Secrets of Royal Family

Source: CrankenStein. If you like this video you may also like some of these. Vaccine or virus?. DUMBS, TV mind control, Whistleblowers, CERN, Black eyed children, Clones, Graphene Oxide, Adverse reactions and more: Self Aware Creatures IN THE VAC…

I wish to voice my thankfulness for this thread to voice the ugly realities of satanic ritual abuse.

Below is a video from 2012. It is the account from a survivor of satanic ritual abuse. I have known for a long time about SRA (satanic ritual abuse) and have suffered through the denial by so many who would not (maybe could not) listen. But, things have changed. The pressure has been relieved like a cork that has popped out of a bottle of champagne. Father knows me and I know Father. It is being exposed more and more and the truth is coming to the surface.

Personally, I have no need to view some of the images being exposed recently on some media outlets. I already know. I pray for those who will see the truth and that they will forgive themselves for their denial. I forgive them. Who could ever believe it is possible unless Father tells you it is.

Numbers 15:25 And the priest shall make an atonement for all the congregation of the children of Israel, and it shall be forgiven them; for it [is] ignorance: and they shall bring their offering, a sacrifice made by fire unto the "I AM", and their sin offering before the "I AM", for their ignorance:
15:26 And it shall be forgiven all the congregation of the children of Israel, and the stranger that sojourneth among them; seeing all the people [were] in ignorance.
15:27 And if any soul sin through ignorance, then he shall bring a she goat of the first year for a sin offering.
15:28 And the priest shall make an atonement for the soul that sinneth ignorantly, when he sinneth by ignorance before the "I AM", to make an atonement for him; and it shall be forgiven him.
15:29 Ye shall have one Law for him that sinneth through ignorance, [both for] him that is born among the children of Israel, and for the stranger that sojourneth among them.
15:30 But the soul that doeth [ought] presumptuously, [whether he be] born in the land, or a stranger, the same reproacheth the "I AM"; and that soul shall be cut off from among his people.
15:31 Because he hath despised the Word of the "I AM", and hath broken His Commandment, that soul shall utterly be cut off; his iniquity [shall be] upon him.
15:32 And while the children of Israel were in the wilderness, they found a man that gathered sticks upon the Sabbath day.
15:33 And they that found him gathering sticks brought him unto Moses and Aaron, and unto all the congregation.
15:34 And they put him in ward, because it was not declared what should be done to him.
15:35 And the "I AM" said unto Moses, The man shall be surely put to death: all the congregation shall stone him with stones outside the camp.
15:36 And all the congregation brought him outside the camp, and stoned him with stones, and he died; as the "I AM" commanded Moses. 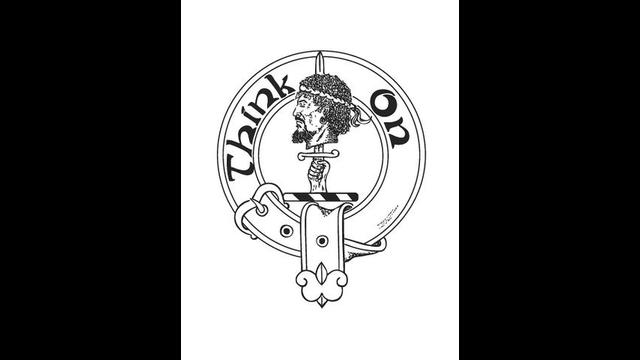 Video .. A secret tunnel for Queen Elizabeth reaches her palace in a famous bar

6 minutes ago Queen Elizabeth British media revealed a leaked news from the British Royal Palace, stating that there was a secret underground tunnel linking Buckingham Palace to one of the famous nearby bars, where he used this tunnel to reach the... 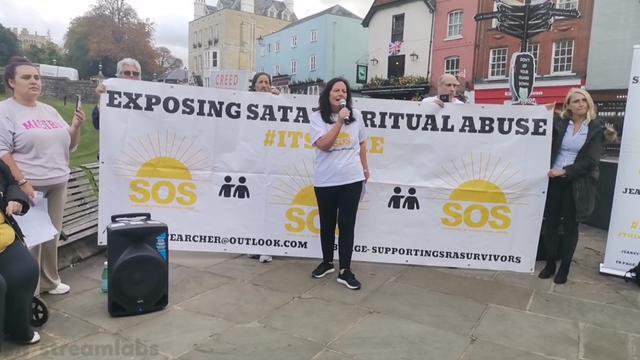 The satanic reptilian Queen is exposed once and for all!!! Guys, the comments will return, i have been heavily infiltrated by satanic scum trolls. Everything will resume ASAP. Thanks for all the support especially all the messages i recieve!!! Vis… 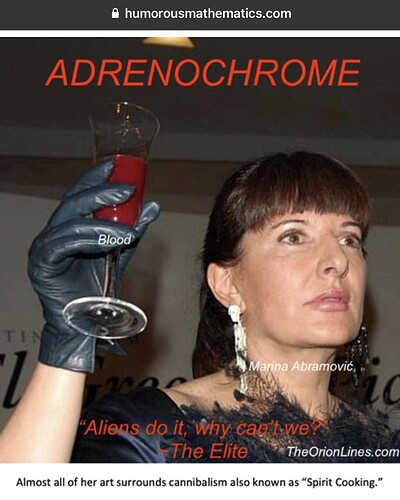 IMHO: Not to discredit the testimony of survivors and no doubt we battle with demons. But, T.H.E.Y. have created reptilian-like creatures through their genetic experiments. The reptilian creatures are "alien" (to the human + being race), but they are not extraterrestrial. They were made here on Planet Earth with the help of Satan (their master). There are witnesses to these creatures. It is true they are reptilian-like. They do not speak (as we understand speaking). It has been said they are telepathic. Because of their abilities, they are hard to kill. They are dangerous to the human race being carnivores. They are terrestrial and not from outer space. God won the war in the heaven. Heaven is not a place harboring evil entities. Evil was cast down from heaven.

She said she saw Elizabeth turn into a lizard.

The morphing into a lizard-like creature is not a rare occurrence in the testimonies of SRA survivors and was depicted in the film (Rosemary's Baby) by a pedophile: director Roman Polanski. The perpetrator morphs into the devil (lizard-like) depicting demonic possession.

Its in the film Conan The Barbarian also. The actor who plays Darth Vader.

It is reported that these images are from a ceremony initiating Elizabeth 2 (prior to her coronation in 1953) into the Mystic Circle of Bards (pagan druids) at the national festival at Mountain Ash; Glamorgan, Wales; August 1946. 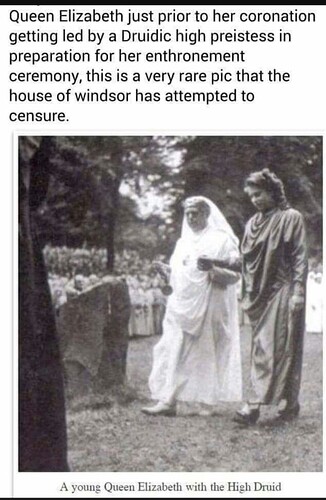 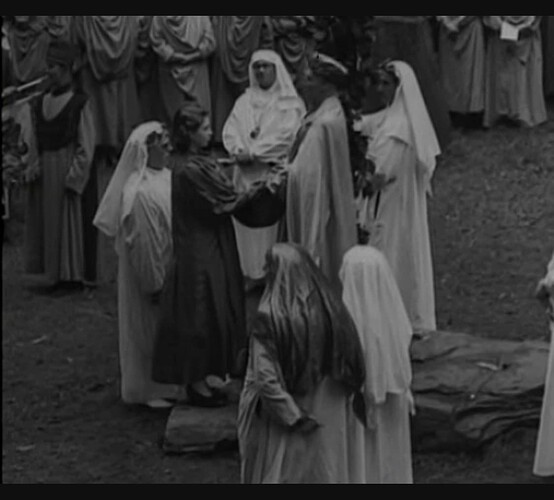 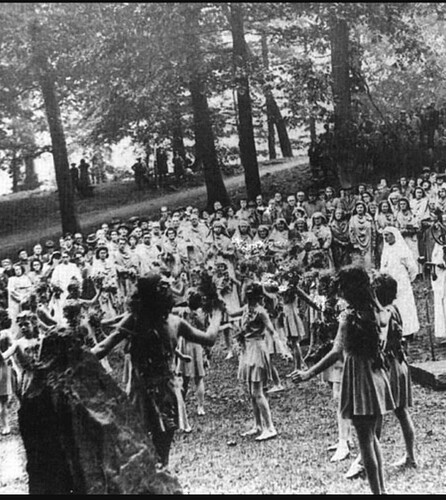 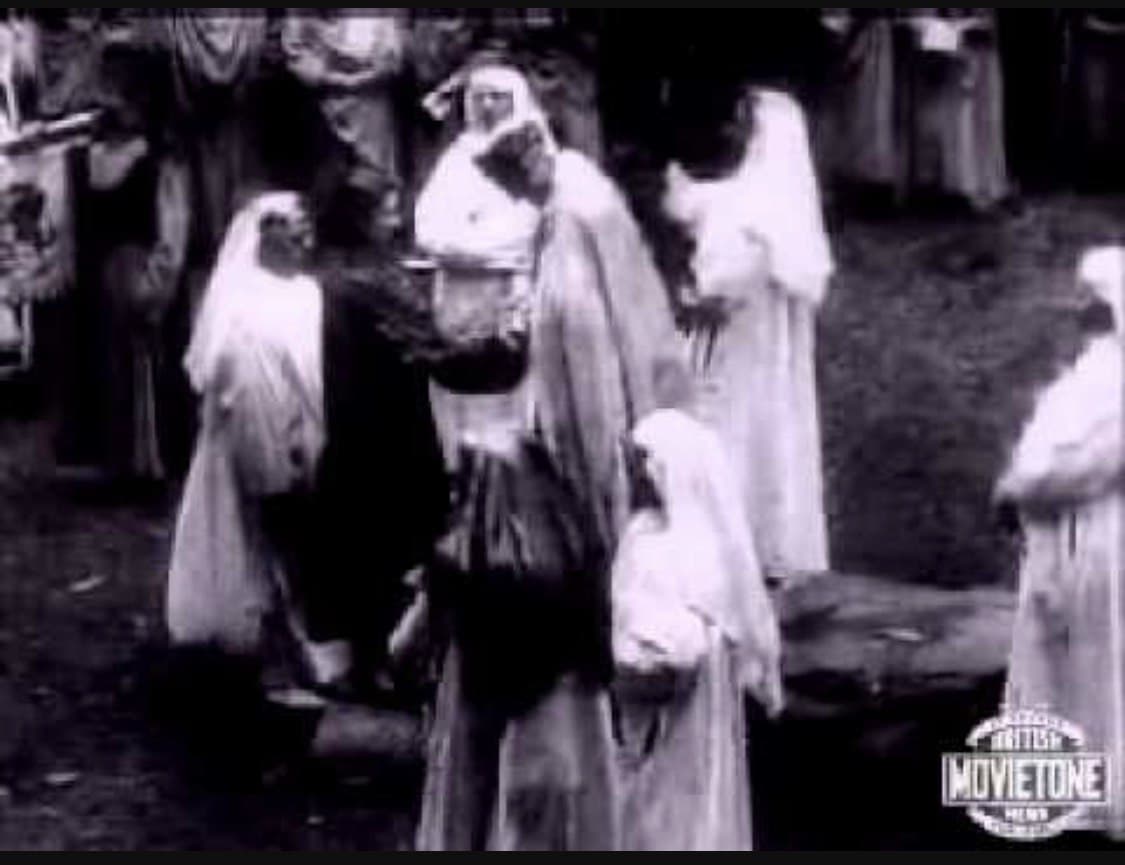 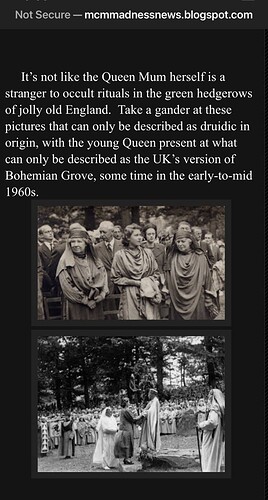 Elizabeth Windsor, commonly known as Queen Elizabeth, whose real name is Saxe-Coburg-Gotha, and her husband, Philip Schleswig-Holstein-Sonderburg-Glücksburg, commonly known as the Duke of Edinburgh, are rapists, child molesters, and murderers–pure and simple.

Buckingham Palace is at the center of a vast pedophile network

Revealed: Peter Hayman, paedo, spy. Tinker, Tailor, Soldier, PIE
"Hayman was awarded the CVO in 1965, an honour granted by the Queen personally. It is unlike most other honours which are given by the Queen on advice from the government ...
"[Police] raided a flat that [Hayman] rented in Notting Hill, central London. There, the police found 45 volumes of obscene diaries in which Hayman described paedophile fantasies. Police discovered that he was a member of
the Paedophile Information Exchange (PIE), which promoted sex with children."
https://exaro.news/revealed-peter-hayman...oldier-pie

John Henniker-Major "provided a sanctuary on his country estate at Thornham Manor in Suffolk to Peter Righton, who supplied boys to paedophile MPs at Dolphin Square and elsewhere."

The Queen "... liked [Henniker-Major] so much that she awarded [him] the CVO, an unusual honour in that it is granted by her personally. Most other honours are given by the Queen on advice from the government."

"Hubert Chesshyre was recognised for services to the Queen after holding multiple senior positions in the royal household ...
"He abused a teenage chorister in the 1990s ... The choirboy he abused believes that Chesshyre may have abused other youngsters. The victim [said]: 'I know of other boys from the choir where their parents became concerned and stopped Mr Chesshyre from having anything more to do with them.
https://www.dailymail.co.uk/news/article...posed.html ...

"Another clubbish scene was the Bohemian Grove retreat in California ... The rich and powerful sometimes made their way to the nearby town of Guerneville, where 10 bars were enhanced by call girls. According to Manu Kanaki, who operated one such establishment, Northwood Lodge, [Prince] Philip was a visitor and was seen in the company of the girls."
'The Royal Philanderer', The Sun Herald, January 28 1996

"According to 'The Franklin Cover-up', by former Congressman John DeCamp, Hunter S. Thompson [was] part of an elaborate child pornography ring linked to the Bohemian Grove during the 80's. The book describes how Hunter S. Thompson was offered $100,000 to make snuff films during ritualized child sex abuse at the Bohemian Grove."
http://www.examiner.com/article/fear-and-loathing-bohemian-grove

Prince Philip's former royal aide accused of three sex attacks on girl aged 12
-- Benjamin Herman, 79, has been charged with three counts of indecent assault and one of attempted indecent assault on the child while working at Buckingham Palace...

During a police inquiry "detectives were told that a tape recorded by Princess Diana of the supposed rape victim describing his ordeal had gone missing ... [Paul Burrell] confirmed he had seen the tape ...

"'This account was taped by the princess as proof of evidence. She thought this person had a right to document it so it could never be covered up ...'"
https://www.theguardian.com/uk/2002/nov/...amiewilson

"[Elaine] Day ... told the tribunal earlier that her problems began when ... she was assigned as PA to Paul Kefford, [Prince Charles'] assistant private secretary. She said that despite being told that Mr Kefford, 32, was homosexual, she felt that he still posed a sexual threat to her. She has accused the former civil servant of 'inappropriately touching' her."
https://www.thetimes.co.uk/article/secre...5ljfbn0zx9

Inside the paedophile's lair: Chilling pics of bunk beds at [Jimmy] Savile's Highlands cottage raided by police where 'up to 20 suffered abuse'
-- The DJ bought remote home in 1998 and entertained guests including Prince Charles
https://www.dailymail.co.uk/news/article...abuse.html

Buckingham Palace butler [Paul Kidd] 'ran paedophile sex ring while working for the Royal Family'
"Bachelor Paul Kidd, 55, groomed at least one of his teenage victims for sex by taking him for tea with the Queen Mother at Clarence House, it has emerged"
http://www.dailymail.co.uk/news/article-1066171/Buckingham-Palace-butler-ran-paedophile-sex-ring-working-RoyalFamily.html

Will Backstairs Billy [William Tallon], the Queen Mother's eccentric retainer, spill his royal secrets from the grave?
"... [William Tallon] was the only male to be allowed into [the Queen Mother's] bedroom and he could do so without knocking.
"He even had an underground passageway and would sometimes smuggle controversial guests in to see her [the Queen Mother] without the knowledge of the rest of the staff."
http://www.dailymail.co.uk/femail/articl...grave.html

"a picture builds up of a royal household in which some gay men expect to be immune from the processes of the law, their crimes covered up, their victims silenced, or paid off"
http://www.newstatesman.com/node/144246...

"[Jimmy Savile] was first introduced to the Royal Family, he reveals, by Lord Mountbatten. In 1966, Jimmy became the first civilian to be awarded a Royal Marines’ green beret. Mountbatten was commandant general at the time and realised that Savile could be a useful contact.

'Coming from Lord Louis, who was the favourite uncle of Prince Philip, that was quite something,' [Savile] says. 'So obviously I hooked up with the Prince – what was good enough for Lord Louis was good enough for him.'"
http://www.express.co.uk/expressyourself/43798/How-Jim-really-did-fix-it

Lord Louis Mountbatten "was a 'boy lover' who dressed his young victims in baby clothing before sexually molesting them ...

"'On several occasions I had to take it to him in his room at the house when he was with a boy,' he said ... On one occasion I walked in on him and he had a semi-naked boy sitting on his knees.'"
https://villagemagazine.ie/the-suppressi...ails-abou/...

"[Gore Vidal's] half-sister and nephew, who were very close to Vidal, have revealed they strongly suspect he was a globe-trotting paedophile who preyed on underage boys"

"... his coterie of celebrity friends such as Princess Margaret"
http://www.dailymail.co.uk/news/article-2501890/But-did-literary-giant-Gore-Vidal-hide-monstrous-secret.html

"... Mackenzie Phillips alleged that at 19 she was raped by [her father John Phillips] and subsequently engaged in a 10-year [incestuous relationship]."

John Phillips and his third wife "[befriended] Princess Margaret while vacationing at her holiday home on Mustique"
http://www.telegraph.co.uk/culture/music/6228133/John-Phillips-a-lifetime-of-debauched-and-reckless-behaviour.html... 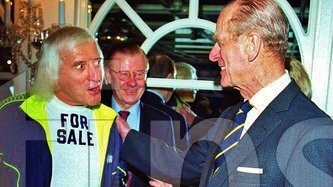 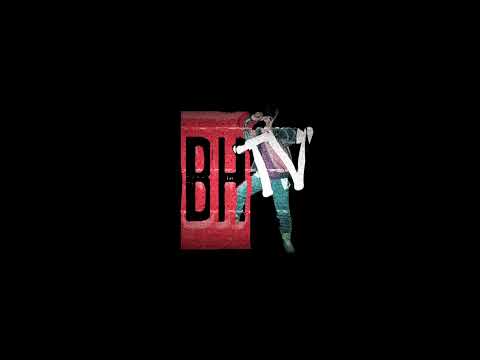 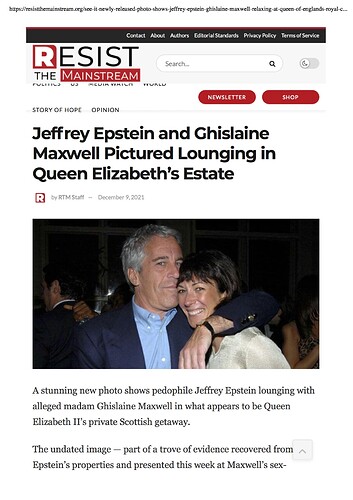 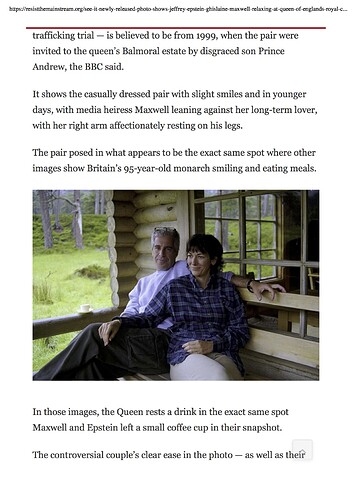 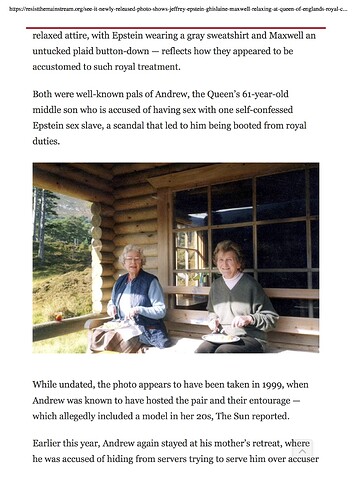 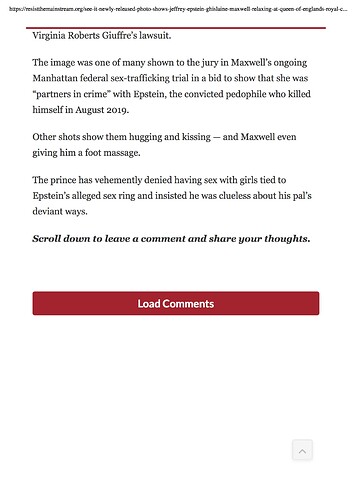 Birds of a feather flock together.

Birds of a feather flock together. 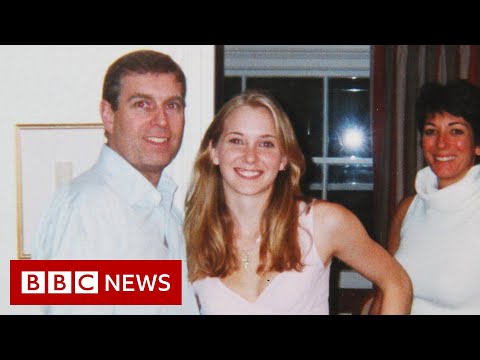 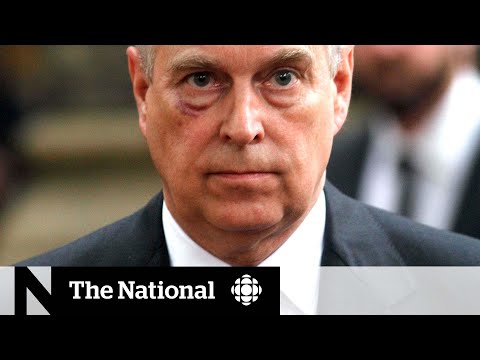 The Duke of York will continue not to undertake any public duties and is defending this case as a private citizen.”