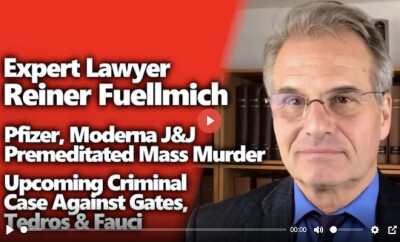 MUST-WATCH - AND VERY EASY TO UNDERSTAND

January 31, 2022: The video included (above) is one of the more recent interviews with German Trial Lawyer Reiner Fuellmich. As damning evidence mounts against the "Global Covid Cartel", the legal case against the villains behind this global bio-tyranny (Gates, Fauci, Adhanom, von der Leyen, and Bourla to name a few) improves exponentially. Take close note of the compelling insights and timelines offered by Fuellmich throughout this important interview.

“This is INTENTIONAL, PREMEDITATED MASS MURDER!” There’s absolutely no doubt about it because nothing else makes any sense,’ said attorney Reiner Fuellmich. ‘We’re going to get them!’ In this FANTASTIC UPDATE EPISODE, we learn that Reiner Fullmich and his POWERHOUSE TEAM of attorneys are charging the world’s most powerful health figures with genocide, citing a range of statistics on the effects of COVID “vaccines” and policies. This is a group that includes former Pfizer vice president Dr. Michael Yeadon, who filed a complaint with the International Criminal Court (ICC) on behalf of UK citizens against Boris Johnson and UK officials, Bill and Melinda Gates, chief executives of Big Pharma companies, World Economic Forum executive chairman Klaus Schwab, and others for crimes against humanity.

Through all of this, they’ve learned WITHOUT A DOUBT that spike protein is one of the most contrived toxins or poisons that man has ever made. And the aim of this toxic is to kill billions without anyone noticing it. So it’s an poison with an agenda. Now we’ve got an engineered virus and we’ve got a mandated vaccine that follow on each other. They have engineered a virus and put on this weapons grade package on to it called spike protein. Dr. Reiner Fuellmich states unequivocally that these new findings are enough to dismantle the ENTIRE Vax industry – and the New World Order! He goes on to say that Tthe experimental ‘Killer Jab’ is in violation of all 10 of the Nuremburg Codes which carry the death penalty for those who seek to violate these International Laws.