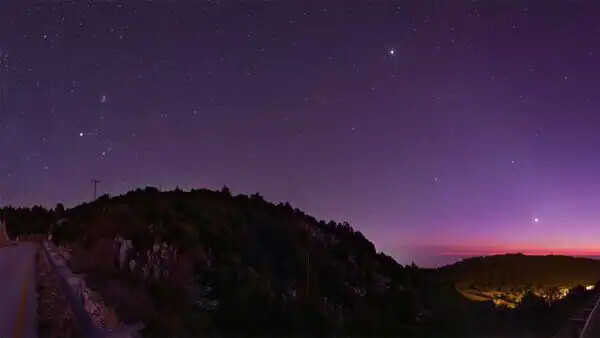 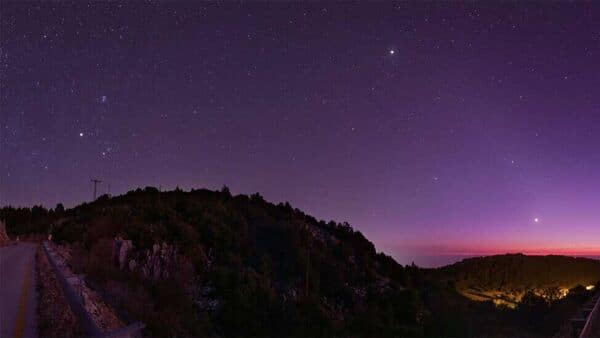 All planets of Solar system seen at the same time from Earth, courtesy NASA

The astronomical phenomenon called ‘planet parade’ int he picture shared by NASA was captured against a lilac sky and looks mesmerising for the onlooker.

The National Aeronautics and Space Administration (NASA) has shared a picture of the night sky where all the planets of our Solar System are visible at the same time, as seen from Earth. The phenomenon that is known as ‘planet parade’ wherein the planets Mercury, Venus, Mars, Jupiter, and Saturn are visible to the naked eye from Earth.

The astronomical phenomenon called ‘planet parade’ int he picture shared by NASA was captured against a lilac sky and looks mesmerising for the onlooker.

The picture was shared by NADA as the Astronomy Picture of the Day (APOD) on Monday, 2 January.

In the picture a wide range of planets are visible, including Jupiter, Mars, Venus, Saturn, and Mercury. The late evening sky also offers sneak peek into the bright stars Altair, Fomalhaut, and Aldebaran.

In the image Venus, Saturn, Jupiter and Mars are visible simultaneously in a linear pattern.

The photo went viral as internet users marvelled at the dazzling dusk time scene. The image has been captured by astronomer and photographer Tunc Tezel in December 2022. According to the description shared by NASA, in the foreground are hills around the small village of Gökçeören, Kaş, Turkey, near the Mediterranean coast.

Posting a new astronomy-related image each day, NASA's APOD tradition stretches back decades. Every day there is a new image along with a short explanation written by a professional astronomer, providing a perfect mix of informational and entertaining content.

APOD's first photo of 2023 featured "the largest rock in our solar system" famously called the 'pale blue dot' through a photo taken by NASA's Voyager 1 spacecraft in 1990.

Today's photo, by photographer Tommy Lease, shows the awe-inspiring Kemble's Cascade of Stars, which is an asterism (a group of stars different from a constellation). APOD's tagline, "discover the cosmos", promises that each day is a new foray into the vast, intricate universe in which we live. Written by Stephen – There was a significant planetary alignment on 5th May 2000, and on that morning I found myself standing alongside The Christ.

Something similar in May 2000.

[Nostradamus] Quatrain 1,53 Las qu'on verra grand peuple tourment, Et la loi saincte en totale ruine: Par autres loix toute la Cristient, Quand d'or, d'argent trouve nouvelle mine. Alas, how we will see a great people (Manasseh/U.S.A . - Genesis 48:19) sorely troubled, and The Holy Law (The Torah) in utter ruin (not in use): All of Christianity (governed) by other laws (men's laws), when a new source of gold and silver is discovered (finance). Genesis 48:19 And his father (Jacob/Isra…