Once again, unopposed for the sixth time, Fabian Picardo was elected as the leader of the GSLP at the party annual general meeting last night, 18th May 2022 in the required two-yearly elections. Hi…

Once again, unopposed for the sixth time, Fabian Picardo was elected as the leader of the GSLP at the party annual general meeting last night, 18th May 2022 in the required two-yearly elections. His election as party leader signifies that he will lead the GSLP-Liberal Alliance at the next general election.

The meeting also debated three motions, the most important one about the envisaged Gibexit treaty between the UK and the EU. The other two involving scholarships for students, and public finances.

All in all, the GSLP remains much unchanged and trundle on without revealing much.

The meeting was closed to the press, so all reports are taken from a statement issued to the press by the GSLP. Information is limited, accordingly, which is odd for a party seeking re-election into government.

The meeting showed its support for the Government’s current and ongoing efforts at securing a Gibexit treaty between the UK and the EU over Gibraltar.

It confirmed its agreement to the idea that “no deal is better than a bad deal”, but without any further details beyond confirmation that red lines on sovereignty must not be crossed.

The motion sought that those negotiations should continue “with optimism and good faith” but that those negotiating must be prepared to walk away from any treaty that conceded on any ideals that the GSLP has been defending for over 40 years. Those values were “the defence of the exclusively British sovereignty of Gibraltar and its people.”

The central omission was that the term “British sovereignty”, continues to remain undefined, with the anomaly being that the GSLP supports a Gibexit treaty by which Mr. Picardo has confirmed an element of outside control.

He has said, in his statement to Parliament of 17th May 2022, that “Spain is the neighbouring member state and is today responsible for the Schengen checks as individuals seek to enter Schengen via Gibraltar-Spain frontier at La Linea. We, therefore agreed in the New Year’s Eve Agreement, which we debated in this House, that Spain will have the responsibility for the Schengen checks as people enter Schengen via the entry points in Gibraltar.”

Those entry checks into Schengen will be undertaken by Spain with the “assistance of Frontex” for “at least” the first four years. One imagines that, when they seek entry into the Schengen area, including Gibraltar, they will involve the same question to non-Gibraltar resident UK nationals that are asked of them at the Gibraltar-Spain frontier at La Linea today.

However, we will need to wait and see what any treaty provides.

Treaties are usually laid before the UK Parliament, and the UK Government is allowed to ratify a treaty 21 days after it is so laid if there is no objection. That process is so if laws are not needed to implement a treaty. If laws are needed, ratification does not occur until all such law are in place. The process is governed by the Constitutional Reform and Governance Act, 2010 of the UK.

A Gibexit treaty is unlikely to require UK laws (unless, possibly, if Defence personnel and/or installations are captured), but will almost certainly need laws in Gibraltar, especially if non-Gibraltar officers are to exercise immigration duties within Gibraltar.

Accordingly, the involvement of Gibraltar’s Parliament seems likely in that function.

Contrary to events over the past couple of years, the meeting reaffirmed GSLP policy that recurrent public spending must be kept equal to or less than recurrent public revenue. In the last two years there have been huge deficits.

In that context, the expressed intention is for the GSLP executive and the Government to work closely to come up with policies to achieve that objective, whilst ensuring that the least well off are protected.

The conclusion can only be that measures will be taken to both cut public cost and increase public revenue. So, does that mean increases in direct and indirect taxes, and municipal and other government charges are on the way?

The motion on student grants was wrongly a self-congratulatory motion. It incorrectly reminds all that it was the first GSLP Government which had introduced mandatory university grants for all.

What it did was make all who got a place eligible for a scholarship, but subject to a means-test. It was the GSD Government which abolished means-testing.

The motion proclaimed that, irrespective of any financial impact on public money of the pandemic and of Brexit, those scholarships now should continue in place, as it is an investment in the future prosperity of Gibraltar.

All in all, no change, and the GSLP trundles on in Government with the Liberals. No policy changes seem to be on the cards, with no hint of who might stand for election with the GSLP at the next general election.

Well, possibly there are two hints, Gemma Arias Vasquez was re-elected onto the executive and seconded a motion, and Albert Borrell proposed the Gibexit treaty motion. Does that prominence indicate anything? We shall wait and see. 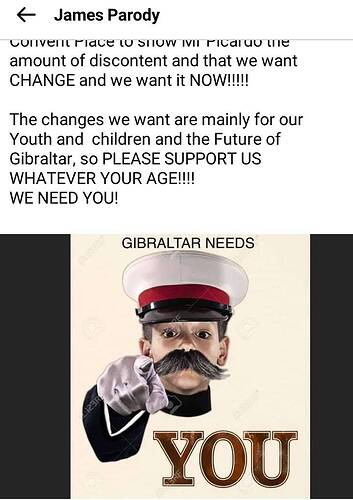 We do not need Picardo, we need God and to reinstate God's Laws.

IF YOU CARE ABOUT GIBRALTAR AND THE FUTURE OF OUR CHILDREN AND GRANDCHILDREN, please turn up and support the DEMONSTRATION at 8pm at Casemates Square on Monday 4th July to VOICE YOUR DEEP CONCERNS