An online petition calling for Rosia Bay to be safeguarded from the current development proposal has amassed over 2,700 signatures in less than a day.

The petition was started by the Nautilus Project. It says Rosia Bay should be preserved and restored as a "natural, historical and public treasure", and that it believes the current private proposal needs to be rejected.

The petition says any development of Rosia Bay should be along the lines of a public leisure open space, with conservation, restoration, education and research as priorities, with only limited commercial interest and no residential development. 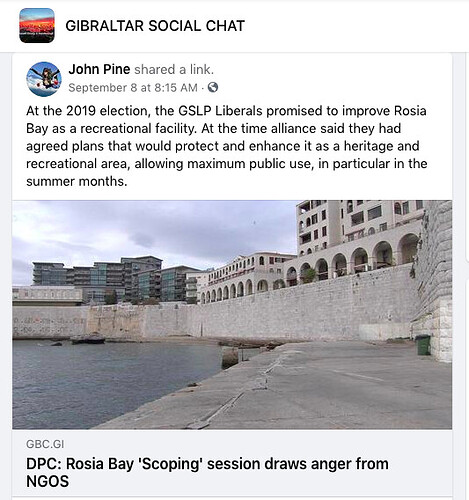 "At the 2019 election, the GSLP Liberals promised to improve Rosia Bay as a recreational facility. At the time alliance said they had agreed plans that would protect and enhance it as a heritage and recreational area, allowing maximum public use, in particular in the summer months." - John Pine, Gibraltar Social Chat

This is just another example of real estate developers and investors insatiable appetite, despite what they goggle up.

How do you know when a politician is lying? When his lips are moving.

Glad to see Gibraltarians rising up to the constant construction madness. 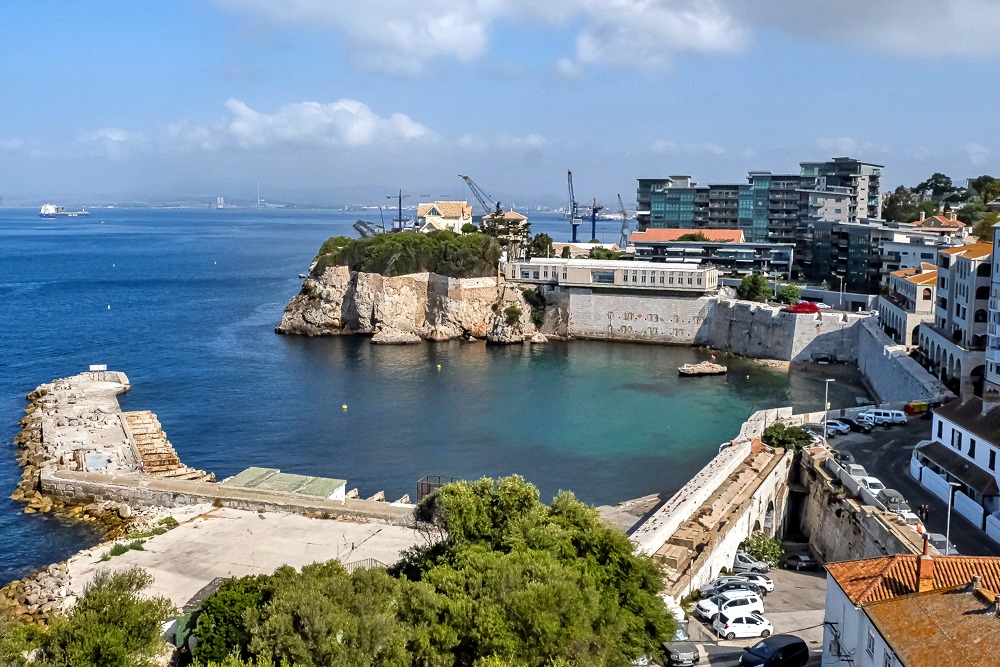 After the Battle of Trafalgar in 1805, Nelson’s body was brought into Rosia Bay aboard his ship HMS Victory. Local legend has it that he was brought inside a barrel of brandy, a claim that the Royal Navy vehemently deny, and was quickly shipped...

After the Battle of Trafalgar in 1805, Nelson’s body was brought into Rosia Bay aboard his ship HMS Victory. Local legend has it that he was brought inside a barrel of brandy, a claim that the Royal Navy vehemently deny, and was quickly shipped back to London for his state funeral.

If there is any truth to the story, then Rosia bay is already as crucially important to our local British heritage as a site like the Moorish Castle. Yet Rosia Bay seems to have fallen out of the local consciousness and, as a result, is in quite serious disrepair. The old jetty has been practically breached by recent winter storms and it is doubtful it will be able to endure many more batterings before it collapses altogether.

Inside the bay one sees a similar pattern with the old dock wall pretty much ready to fall into the sea. The walkway to the tiny beach is not much better, and this lack of maintenance increases the risk of an accident happening any day. The site has been earmarked for more luxury developments and heritage to one side, it is important to highlight a few good reasons why environmentally it is very important that this doesn’t happen.

The giant limpet, Patella ferruginea, is a locally protected species which has disappeared from many regional coastlines. These animals are sequential hermaphrodites starting as males and transitioning to females after they reach around 3cm in length. The fact that sex ratios can be so easily skewed by harvesting the largest individuals, which inevitably are all females, has historically decimated the reproductive capacity of established populations. Fortunately, Gibraltar has a stable population and the anecdotal evidence seems to suggest that this species is doing well, locally at least.

What I find interesting is that the government whilst claiming to be concerned about the environment seem to look the other way when it comes to the pollution caused by all these construction projects – from noise, air, and waste.

Many people are just sick and tired of it - which is why the GSLP put a hold on the Victoria Keys project for awhile (possibly to help win the election). And as John Pine pointed out, seems like the GSLP lied about Rosia Bay too.

Every new construction project is also an environmental nightmare when it comes to the rubbish produced.

Where does recycling and rubbish from the UK go? 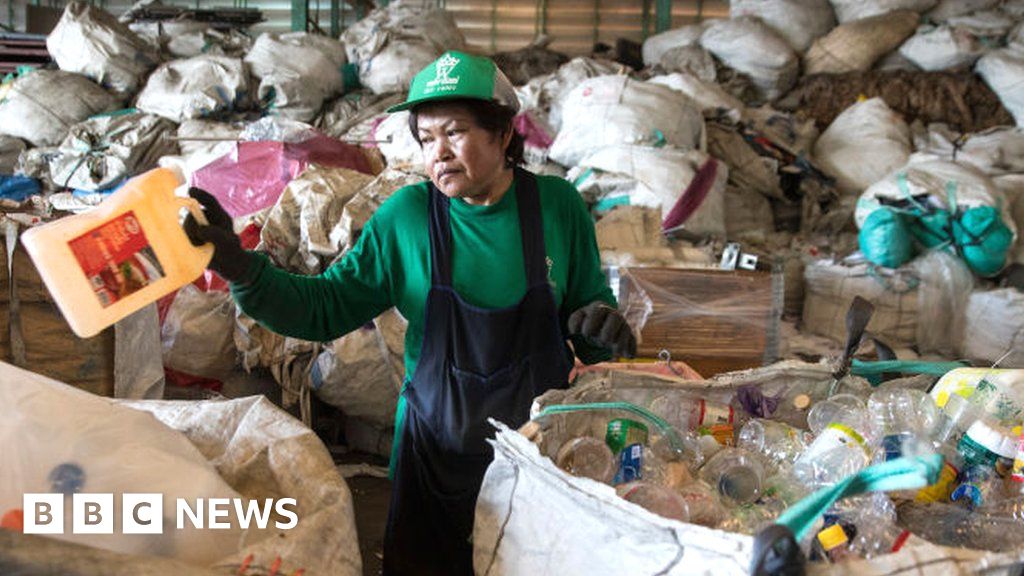 Where does recycling and rubbish from the UK go?

As a company is fined for sending UK waste to China, just where does our recycling and rubbish go?

2019 Article – How much waste does the UK produce?

England was responsible for 85% of the total.

Construction and demolition generates the most - about 136 million tonnes a year. Mineral waste accounts for 36% of the total and includes anything that's left over from mining or quarrying, and can't be used again. 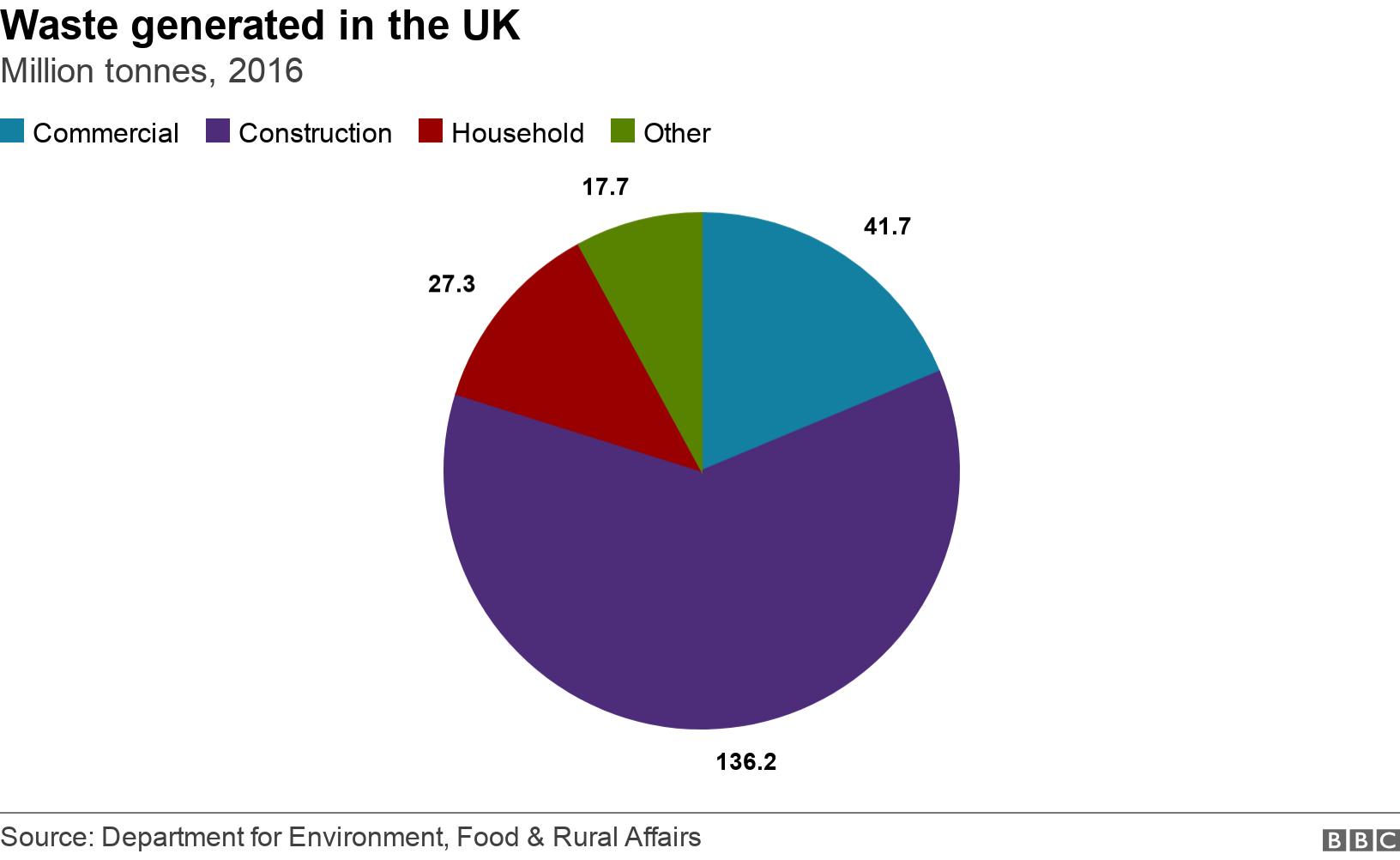 Construction makes up the the majority of rubbish, as indicated by the purple colour.

How likely is this the same scenario in Gibraltar?

And how are all these luxury housing for? It's not the locals. I don't think they plan to raise families in efficiencies and 1 bedroom apartments.

If they aren't going to build housing for Gibraltarians, then let Rosia Bay be for all Gibraltarians; and let the government keep its promise of making a recreational facility. In the hot months, everyone is gadding about hanging out near the water, not holdup in their homes. 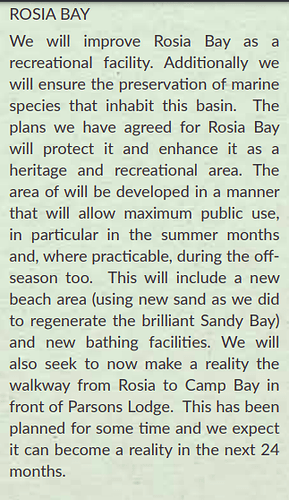 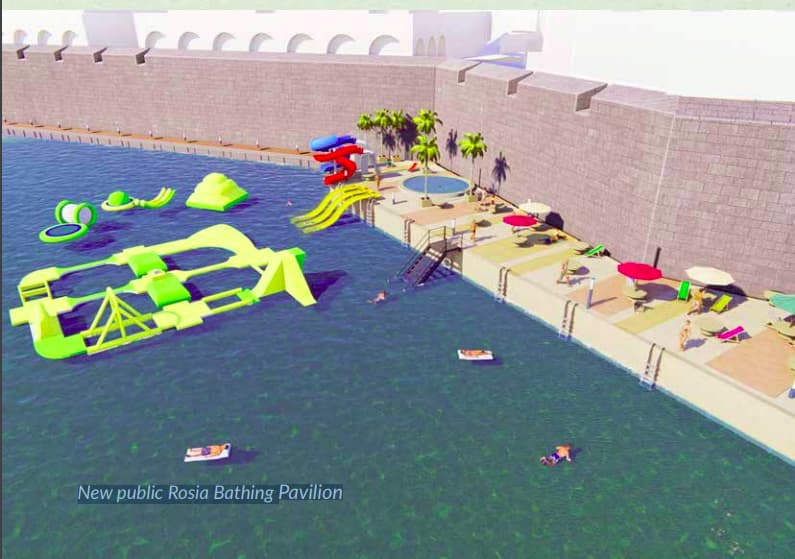 Found this article from 2016 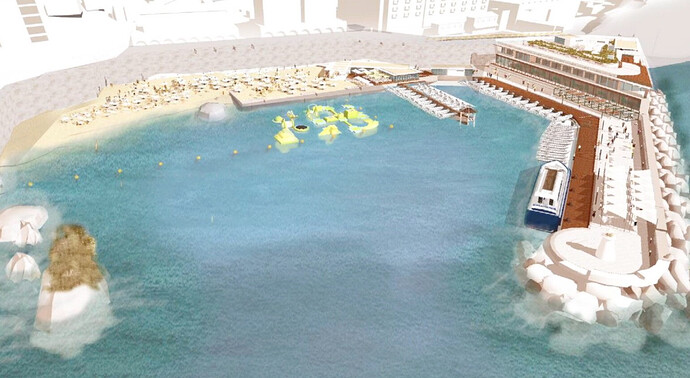 DPC reluctant to move ahead with Rosia Bay Development

This afternoon the Development & Planning Commission were reluctant to move ahead with approval of proposed plans for the redevelopment of Rosia Bay. At a meeting this afternoon the Commission agreed that they could not move forward until more checks were carried out in the area to ensure that it is a viable idea to the area.

In the session the Commission heard from the Developers interested in converting the Rosia Bay area into a public beach. The project would also include a rooftop restaurant and an indoor waterpark for children. The revised application and EIA for the £4.5 million pound development was submitted to the DPC last month.

The 6 residential apartments were also cause for concern, with one objector saying they were contrary to the Gibraltar Development Plan. Issues of privacy reference the restaurant and the Rosia Cottages were also raised.

Clive Reid, from Europa Point Marine Village LTD, took exception with some of the objections, notably that some were seeing it as ‘greedy developers’ trying to make as much money out of the project as possible.

2021 - Seems like greedy developers are at it again, but this time its about luxury apartments and commercial areas.

The Nautilus Project is the one that brought the petition. Here is one of its videos about snorkeling in Rosia Bay (under 2min) 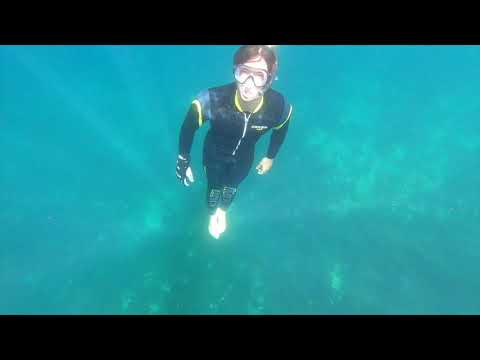 From this link, you can find videos about what the Nautilus Project does.

For non-Gibraltarians, here are some photos of Rosia Bay, which actually is a local hangout even in its current condition and a fishing hole for many. It is located in the South District on The West side. 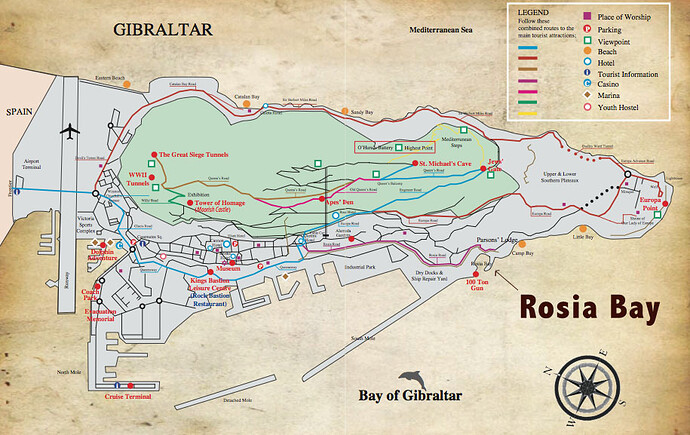 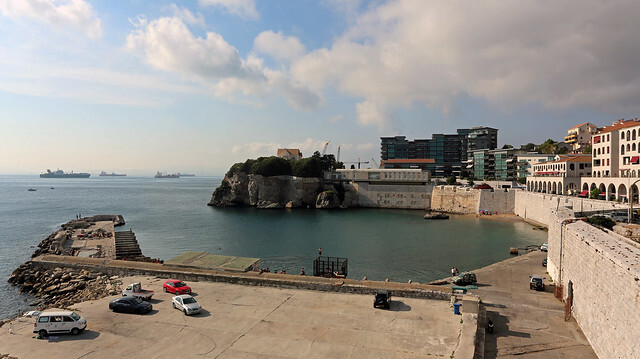 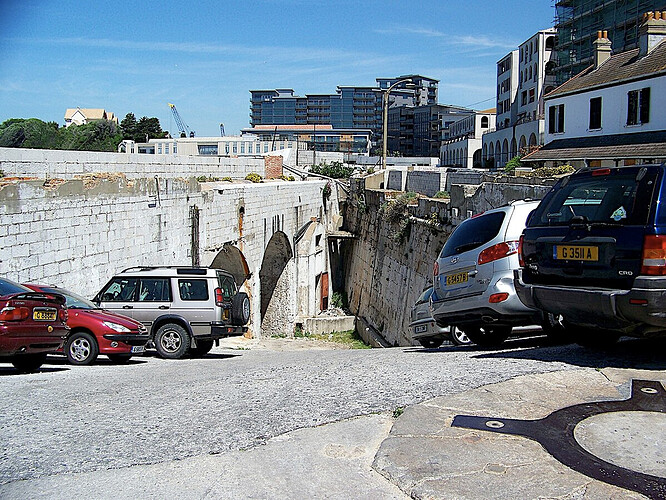 Stairwell down to Rosia Bay 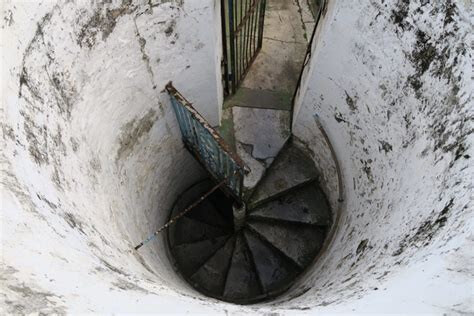 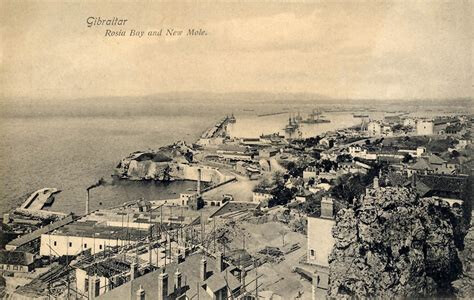 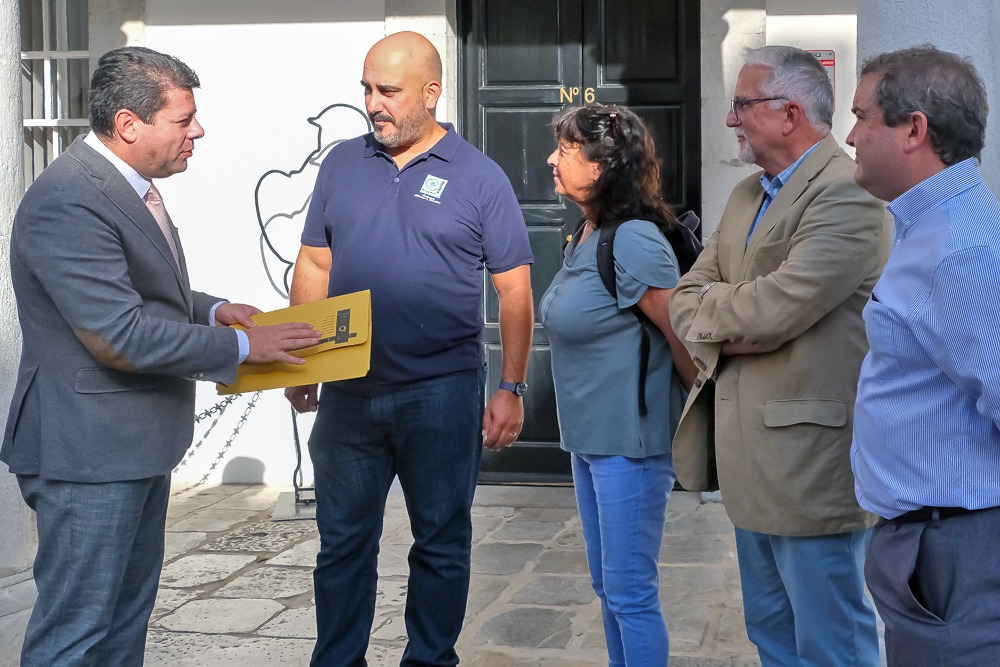 A petition with nearly 5,500 signatures opposing the proposed development of Rosia Bay was handed to Chief Minister Fabian Picardo on Friday. The petition was last month launched online by The Nautilus Project some 24 hours after the Rosia Bay...

15th October 2021
A petition with nearly 5,500 signatures opposing the proposed development of Rosia Bay was handed to Chief Minister Fabian Picardo on Friday.

The petition was last month launched online by The Nautilus Project some 24 hours after the Rosia Bay project was brought before the Development and Planning Commission.

Local NGOs Environmental Safety Group, GONHS and The Gibraltar Heritage Trust have joined in their support for the petition against the plan to build up to 75 residential properties in the historic, but rundown Rosia Bay.

Lewis Stagnetto, of the Nautilus Project, told the Chronicle the organisation is opposed to private and residential purposes on the site, partly from the environmental perspective.

“There are a lot of key species in the basin, it is an important nursery ground and the idea of developing that area is worrying to us,” Mr Stagnetto said.

“There is also a lot of heritage value because that is where Admiral Nelson was brought in to Gibraltar and it is also a recreational area for a lot of people.”

The petitioners said they will support the preservation and restoration of Rosia Bay as a “natural, historical and public treasure”.

Mr Stagnetto said there are three main pillars that people have commented on with regards to this site.

People want the area to be restored to its former glory as a heritage site, but they also want it to remain open for recreational use by members of the public, and they want the environment to be protected, Mr Stagnetto said.

ESG, GONHS and the Gibraltar Heritage Trust all voiced their opposition about the proposal during the DPC meeting.

Janet Howitt, of the ESG, said: “The petition arose from the furore online after the project was presented to the DPC.”

“All three NGOs feel very similar, that it is not fit for purpose, it is not suitable for the area, and it doesn’t tick any of the boxes.”

“So we wanted to run a public campaign and people know how we feel about it.”

“The Nautilus Project launched a petition 24 hours after that and thousands of signatures were collected within 48 hours, so we think the community agrees that this is not going to happen, but we want to make sure.”

In the GSLP/Liberal party election manifesto for 2019, the party committed to a restoration of Rosia Bay and its mole as well as the building of a Military Museum.

Dr Keith Farrell, Chairman of the Gibraltar Heritage Trust, said that while the Trust would want to see this commitment materialise.

“We understand that there are financial constraints, but it doesn’t mean that you trash that promise and then put in a commercial enterprise to deface that area where there are no substantial provisions for parking, for sewage,” Dr Farrell said.

“And then tag on the repair of the Mole which is historically extremely valuable quite apart from all the environmental issues that need to be cared for.”

“The mole needs repairing and we need to look for an alternative way, and at least secure it for the next few winters because the winter storms are a problem.”

“We understand the urgency of trying to repair this but the commercial route is not the answer.”

Dr Farrell said it has gone from an ex-MOD controlled area, to just being abandoned, and the public has never been able to enjoy it properly.

Dr Keith Bensusan, of GONHS, said Rosia Bay is a special place in Gibraltar where the natural environment and heritage are “in synergy”, but is “desperately in need” of refurbishment.

“That refurbishment has to be done that is extremely sensitive to the site’s heritage and natural value and the site needs to be accessible to the public, every last bit of it,” Dr Bensusan added.