Hybrid World: The Plan To Modify and Control The Human Race 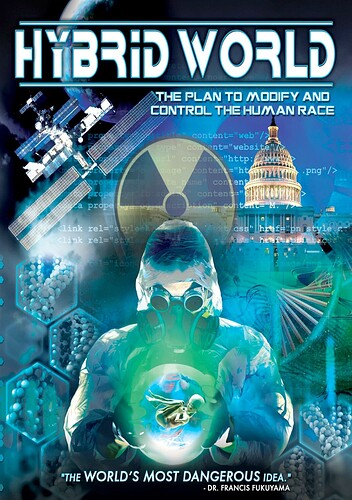 HYBRID WORLD The Plan to Modify and Control the Human.

Behind closed doors scientists and corporations have breached genetic codes that separate the individuality of all animal and plant species on earth. Laboratories around the world are honing their skills while our humanity and dignity as a species is on the operating table like a universal Frankenstein, subject to a wholesale psychic and physiological re-design under the guise of “progress.”

The proponents claim the field of “Transhumanism” will change the world by eliminating sickness and famine while at the same time, governments and military groups around the globe are having clandestine meetings to discuss super soldiers, super intelligence, and even super animals to maintain military dominance and control over the populations of the world.

Even more horrifying they must create committees to implement plans to defend their nations against future terrorism performed by transhumans (modified human beings) with the universal understanding that no nation can afford NOT to engage in this apocalyptic future of genetically altered life.

We are at war for the mind of a generation and the soul of the human race.
Billions of dollars are at stake with corporations and powerful individuals looking toward a post human future world.

If we care about our humanity, then the time is NOW to stand up and understand where science and technology are taking us and to do something about it.

Our foods are already being genetically altered with devastating side effects which are now coming to light.

Will we allow experiments with genetic engineering to excel to a horrifying level where they create an unthinkable race of non-human entities? What level of horrifying abominations have already been committed?

Transhumanism could become a new kind of mass destruction. We are completely uncertain about how when this gets out of the box, where it may lead us.

This 55-minute documentary was made in 2012, long before Dr. Carrie Madjec spoke out about how far the evil scientists have come in Transhumanism.

The TRAILER can be viewed on its IMDb page. 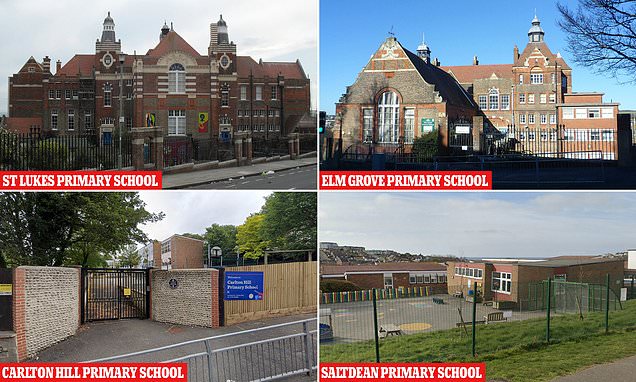 EXCLUSIVE: Parents at four state primary schools in the seaside town say they and their children have become confused by the edict contained in equalities policies. 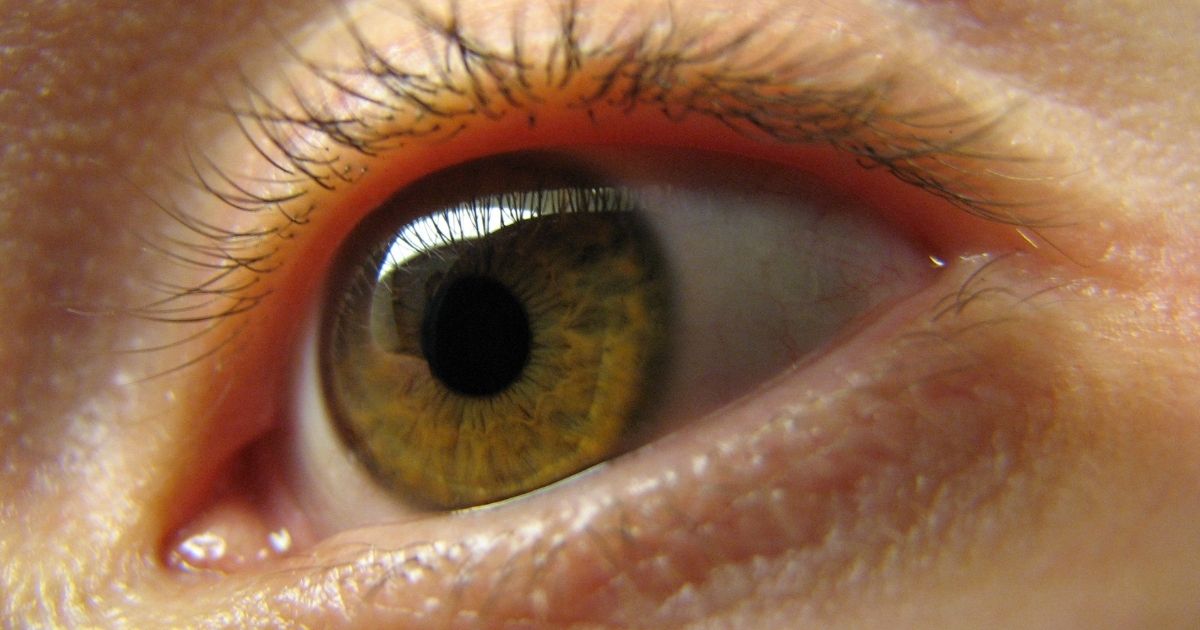 Woman with Cutting-Edge Eye Implant Heard Small Beeping on Subway Before Her...

Many people who volunteered for cutting-edge eye implants are being left in the dark after the company stopped supporting the technology.

Hundreds of people are being plunged back into the dark as their bionic eye devices fail after the company that made them stopped supporting the tech. It is a tale of the wonders of technology but also a warning that new tech does not mean permanency.

People often have the mistaken notion that once something is invented, manufactured and sold, we have it with us forever. But many people who found life-changing relief with the Argus retinal implant systems are now finding that they risk being returned to blindness — or worse, serious medical distress.

Many were implanted with the Argus systems over the past two decades, giving them enough sight to go about their lives. For many, Argus was a revelation that gave them an amazing increase in their standard of living.

One of them, a New Yorker named Barbara Campbell, says that she had her device implanted to compensate for a genetic disease that rendered her completely blind in her 30s. But Campbell says last year when she was walking through the New York subway system, she heard a few odd beeping noises — then everything went black when her device completely failed her, according to IEWW Spectrum.

Another patient, Terry Byland, received his Second Sight system for both his eyes. But now he faces the same fate as Campbell as he sits in rueful anticipation of failure.

As IEWW Spectrum, the website of IEEE technology organization, noted, the Argus system has been abandoned by Second Sight Medical Products because the tech did not make the company enough money and the company is now on the verge of bankruptcy.

IEEE added, “more than 350 other blind people around the world with Second Sight’s implants in their eyes, find themselves in a world in which the technology that transformed their lives is just another obsolete gadget. One technical hiccup, one broken wire, and they lose their artificial vision, possibly forever. To add injury to insult: A defunct Argus system in the eye could cause medical complications or interfere with procedures such as MRI scans, and it could be painful or expensive to remove.”

“As long as nothing goes wrong, I’m fine,” Byland told IEEE. “But if something does go wrong with it, well, I’m screwed. Because there’s no way of getting it fixed.”

Ross Doerr, another Second Sight customer, thought things were going along well with his implant until he was rudely told that he was standing on the precipice of disaster.

Doerr “received an implant in one eye in 2019 and remembers seeing the shining lights of Christmas trees that holiday season,” IEEE reported. “He was thrilled to learn in early 2020 that he was eligible for software upgrades that could further improve his vision. Yet in the early months of the COVID-19 pandemic, he heard troubling rumors about the company and called his Second Sight vision-rehab therapist. ‘She said, ‘Well, funny you should call. We all just got laid off.’ She said, ‘By the way, you’re not getting your upgrades.””

It all amounts to a tale most Americans don’t think about. We are all tuned to hearing these wonderful stories of new technology, certainly. We see similar stories in the media every day. But we rarely hear when the companies that invented such tech go out of business.

People mistakenly imagine that these technologies are permanent — especially in the medical field. But all one needs to do is think of the trajectory of personal computers to realize that no tech is forever. After all, when PCs were first introduced, they came with giant floppy drives to load software. Then the drives shrunk to three inches. Then the CD ROM eliminated the floppies. Then the DVD eliminated the CD. Now we have everything downloaded from the Internet and cellphone apps. And if you want to use those old floppies from the early 1990s, well, you are pretty much out of luck.

Sadly, something similar has happened to these Second Sight patients.

Still, if they are fortunate, these customers may soon be able to turn to neural implants to help with their medical conditions. Last April, for instance, Elon Musk’s Neuralink Corp. released a three-minute video showing a monkey playing video games with the help of a brain implant that was hooked to a computer.

A Neuralink voice-over explained that the company “records from more than 2000 electrodes implanted in the regions of the monkey’s motor cortex that coordinate hand and arm movements,” Western Journal reported.

“Using these data, we calibrate the decoder by mathematically modelling the relationship between patterns of neural activity and the different joystick movements they produce,” the video said.

“After only a few minutes of calibration, we can use the output from the decoder to move the cursor instead of the joystick,” the video added.

The video then shows the animal moving the computer cursor without the use of a hand-held device, instead using his mind.

“The reason Neuralink works is because it’s recording and decoding electrical signals from the brain,” the video concluded.

Could humanity realize a day when the human brain is directly wired to the world-wide Internet? Will we be able to download things directly to our brains? It sounds like outlandish science fiction. But perhaps we are getting ever closer to the day when technology can link directly to the human body.

Still, while scientists and techs hail these projects, the idea of a computer-to-brain link is daunting to others who fear that we are one step closer to external mind control. It may be a Pandora’s Box that, once opened, can never again be closed.

It is likely, though, that we’ll see both the good and the bad with these new technologies, as always. Progress cannot be stopped, as they say.