GlaxoSmithKline plc and Vir Biotechnology, Inc. today announced they have signed a Joint Procurement Agreement with the European Commission to supply up to 220,000 doses of sotrovimab, an investigational single dose SARS-CoV-2 monoclonal antibody for...

GlaxoSmithKline plc and Vir Biotechnology, Inc. today announced they have signed a Joint Procurement Agreement with the European Commission to supply up to 220,000 doses of sotrovimab, an investigational single dose SARS-CoV-2 monoclonal antibody for the treatment of adults and adolescents (aged 12 years and over and weighing at least 40 kg) with COVID-19 who do not require oxygen supplementation and who are at risk of progressing to severe COVID-19. The Joint Procurement Agreement enables participating European Union (EU) Member States to quickly purchase sotrovimab, following local emergency authorisation or authorisation at the EU level, to treat high-risk patients with COVID-19 who may benefit from early treatment with sotrovimab.

This action follows the positive scientific opinion issued by the European Medicines Agency’s (EMA) Committee for Medicinal Products for Human Use (CHMP), under Article 5(3) of Regulation 726/2004, which can be considered by the national authorities in EU Member States when taking evidence-based decisions on the early use of the medicine prior to marketing authorisation. Sotrovimab is included in the European Commission’s portfolio of promising candidate therapies as part of its COVID-19 Therapeutics Strategy. In addition, the documentation to support the forthcoming marketing authorisation application for sotrovimab is under rolling regulatory review with the EMA.

GlaxoSmithKline: Bribery, corruption, fraud – In 2012 the US Department of Justice penalised GSK US$3 billion (US$1 billion in criminal fines and US$2 billion in a civil suit), the largest ever payment by a pharmaceutical company at the time, for a multidimensional healthcare fraud. This fine was levied due to GSK failing to report safety data and introducing misbranded (off label promotion of) drugs. GSK did not disclose the dangerous side-effects (such as increased risk of congestive heart failure) of their diabetes drug Avandia. This crucial data was withheld from the US Food and Drug Administration between 2001 and 2007. Since then it has been estimated that it could have caused up to 100,000 heart attacks in the US. 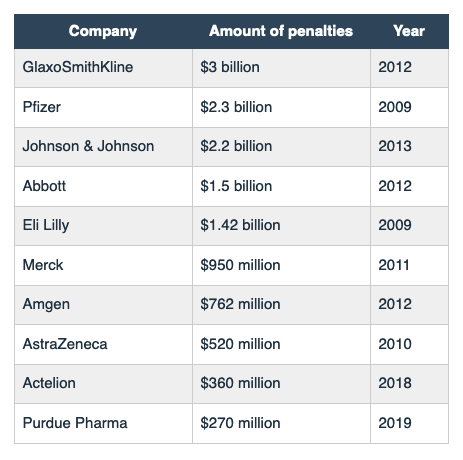 Merck has reached an agreement that will let other drug makers produce its COVID-19 pill, though many countries ...

Merck has reached an agreement that will let other drug makers produce its COVID-19 pill, though many countries are excluded from the pact.

Merck and the United Nations-backed Medicines Patent Pool announced the agreement, saying it would help broaden access to the treatment in 105 low- and middle-income countries.

The pool will be allowed to license non-exclusive sublicenses to manufacturers to make the pill, known as molnupiravir.

Merck, which has a tradename of MSD, and its partners, Ridgeback Biotherapeutics and Emory University, won’t receive royalties for the sales of the pill in the selected countries as long as the World Health Organization keeps classifying COVID-19 as a public health emergency.