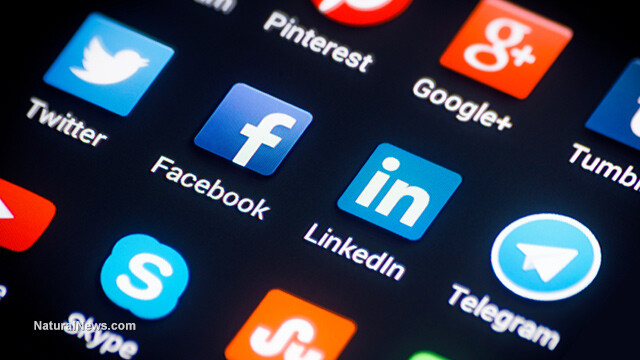 (Natural News) Texans — and, hopefully soon, everyone else living in the United States — will be relatively free of being censored for ‘wrong think’ on the various social media platforms.

A federal appeals court ruled on Friday that the Lone Star State can begin enforcing a law aimed at punishing platforms for downgrading, shadowbanning, or otherwise hiding certain content, noting that just because they are private companies they don’t have a constitutional right to punish speech.

According to Mass News, the U.S. Fifth Circuit Court of Appeals in New Orleans rejected what was described as “an odd inversion of the First Amendment.”

“The platforms argue that buried somewhere in the person’s enumerated right to free speech lies a corporation’s unenumerated right to muzzle speech,” the court ruled, adding that under a standard held by the social media giants, any communication medium — email providers, mobile phone carriers, and even banks that had chat platforms could cancel or censor accounts of anyone who engaged in speech disfavored by the company. That would include sending messages of support for a political candidate or party or business not preferred by the platform.

“Today, we reject the idea that corporations have a freewheeling First Amendment right to censor what people say,” the appeals panel wrote. They added that platforms could get the upper hand by claiming to be completely open — as Twitter did when it launched as “the free speech wing of the free speech party” — only to use its dominant position later on to censor and ban people’s posts that corporate leaders simply don’t like.

HB20, which prohibits platforms with more than 50 million users from censoring content posted by residents of the state based on viewpoint, marks one of the boldest efforts by Republican-controlled states to push back against Big Tech’s alleged anti-conservative bias. Texas had argued that Silicon Valley went so far as to muzzle federal elected officials – such as President Donald Trump – and even censored a congressional hearing that featured disfavored viewpoints.

The panel ruled, however, that the platforms have a right to ban speech that encourages criminal behavior or makes threats of harm. 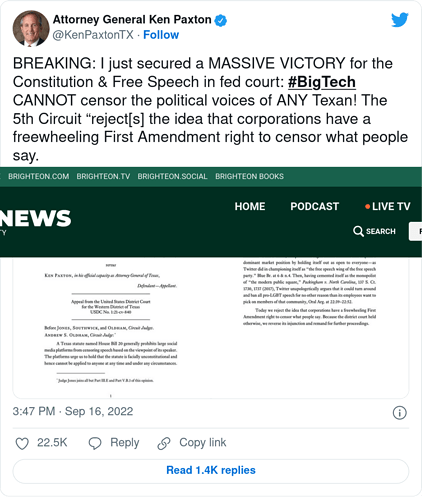 Screenshot 2022-09-19 at 12-46-55 Free speech VICTORY Federal appeals court rules Texas can enforce anti-censorship law aimed at social media platforms942×1109 201 KB
“NetChoice and the Computer & Communications Industry Association sued Texas after the law, known as House Bill 20, was passed last year, arguing that internet companies have a First Amendment right to curate content posted on their platforms and decide which types of speech they saw fit to be there,” The Texas Tribune reported. The left-leaning outlet is funded in part by Facebook.

The industry group complained that the ruling means that platforms have to now give voice to all manner of speech, even that deemed “extreme” (by the platforms’ left-wing censors).

“We strongly disagree with the court’s decision. Forcing private companies to give equal treatment to all viewpoints on their platforms places foreign propaganda and extremism on equal footing with decent Internet users, and places Americans at risk,” the group noted in a statement opposing the ruling. “‘God Bless America’ and ‘Death to America’ are both viewpoints, and it is unwise and unconstitutional for the State of Texas to compel a private business to treat those the same.”

It needs to be said that even a “private business” cannot engage in unconstitutional acts, so that is a moot point.

In any event, this decision will likely be appealed to the U.S. Supreme Court, but for now, at least, the state can enforce its law.