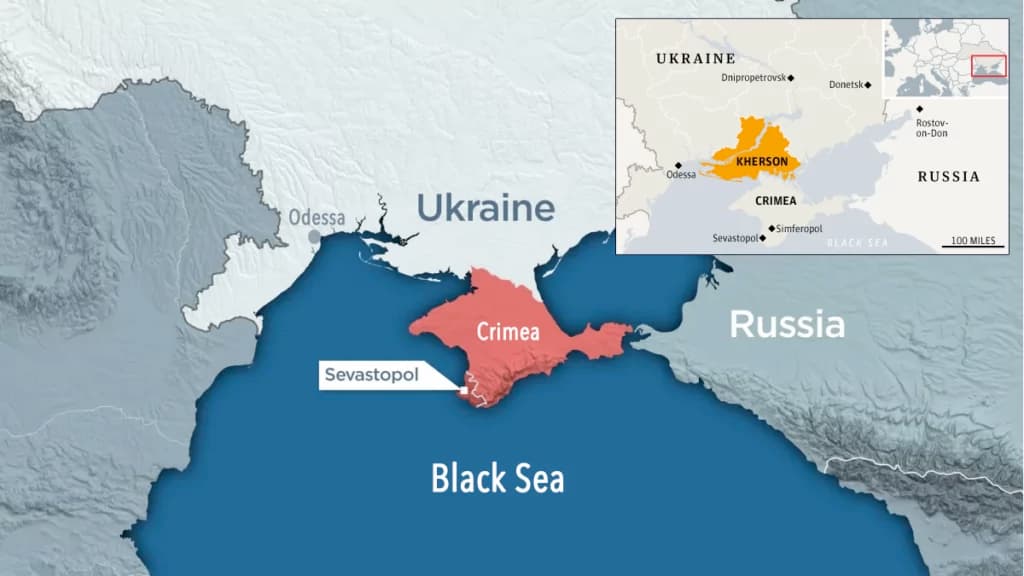 Thought these were kind of interesting, published before this attack.

Crimea is Russian territory now. Russia has previously stated that if U.S. long range weapons are used against “Russian territory” then Russia will declare the US an active combatant, and will take military action.

The US says that Crimea is “Ukrainian territory” and so the Ukrainians can use HIMARS against it.

Over the weekend, former President of Russia, Dmitry Medvedev publicly spoke about possible Ukrainian attacks on Crimea, and said: “If something like this happens, Judgment Day will happen to all of them”

Overnight, the Russian Navy began moving several ships OUT of Crimea to their port at Novorossiysk. The Russian Black Sea fleet pulled anchor and left Sevastopol, for the Kuban. Clearly they suspect a missile attack on the port facilities.

"I will add that the US-built Maritime Operations Centre in Ochakov makes it possible to support activity by NATO warships, including the use of precision weapons, against the Russian Black Sea Fleet and our infrastructure on the entire Black Sea Coast." President of Russia Vladimir Putin, Feb 2022 Speech. 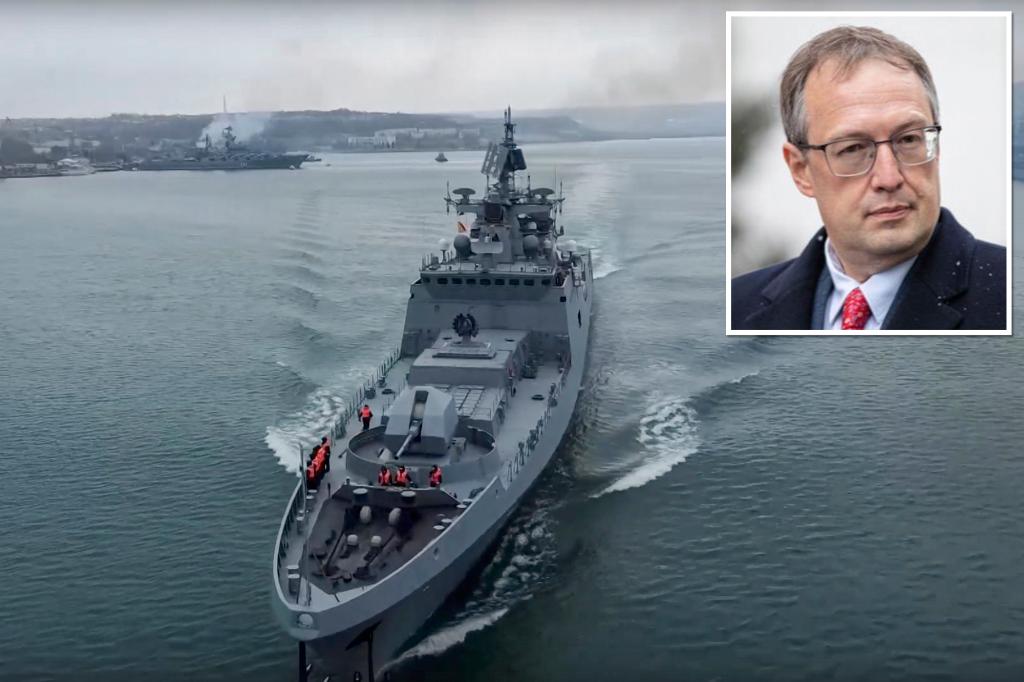 A Ukrainian official tweeted Friday that the US is working on a plan to send Ukraine high-powered missiles to destroy Russian Navy ships blocking Black Sea ports.

The US is working on a plan “to destroy the Black Sea Fleet” with powerful missiles in order to unblock Ukraine’s ports, according to a high-ranking Ukrainian official.

“The effective work of the Ukrainians on warships convinced (the US) to prepare a plan to unblock the ports,” Ukrainian Ministry of Internal Affairs adviser Anton Geraschchenko tweeted Friday.

“Deliveries of powerful anti-ship weapons (Harpoon and Naval Strike Missile with a range of 250-300 km) are being discussed.”

Kyiv has made no secret that it wants missiles that could push enemy ships away from its Black Sea ports.

About 20 Russian navy vessels, including submarines, are in the Black Sea, the British Defense Ministry has said.

The Naval Strike Missile can be launched from the coast and has a range of 250 km, or 155 miles. It takes less than 14 days to learn how to use it.

One unnamed official told Reuters that no one wants to be the first nation the send the missiles to Russia for fear of retaliation if a ship is sunk by one of its Harpoon missiles. 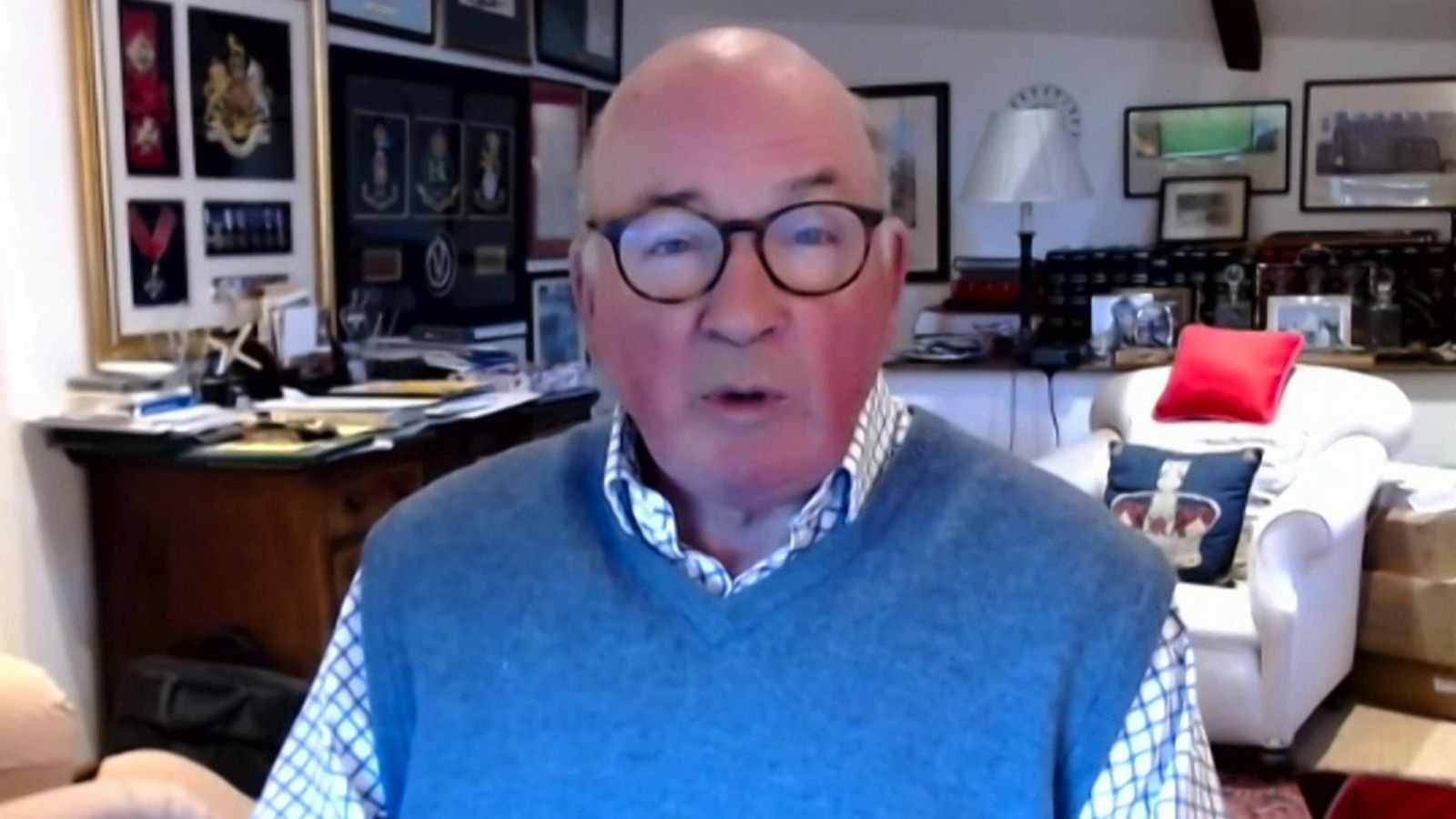 NATO 'could sink whole Black Sea Fleet if it chose to' says former chief of...

NATO is reacting to Vladimir Putin's "bluff and threats" in a wise manner, according to General Lord Dannatt. 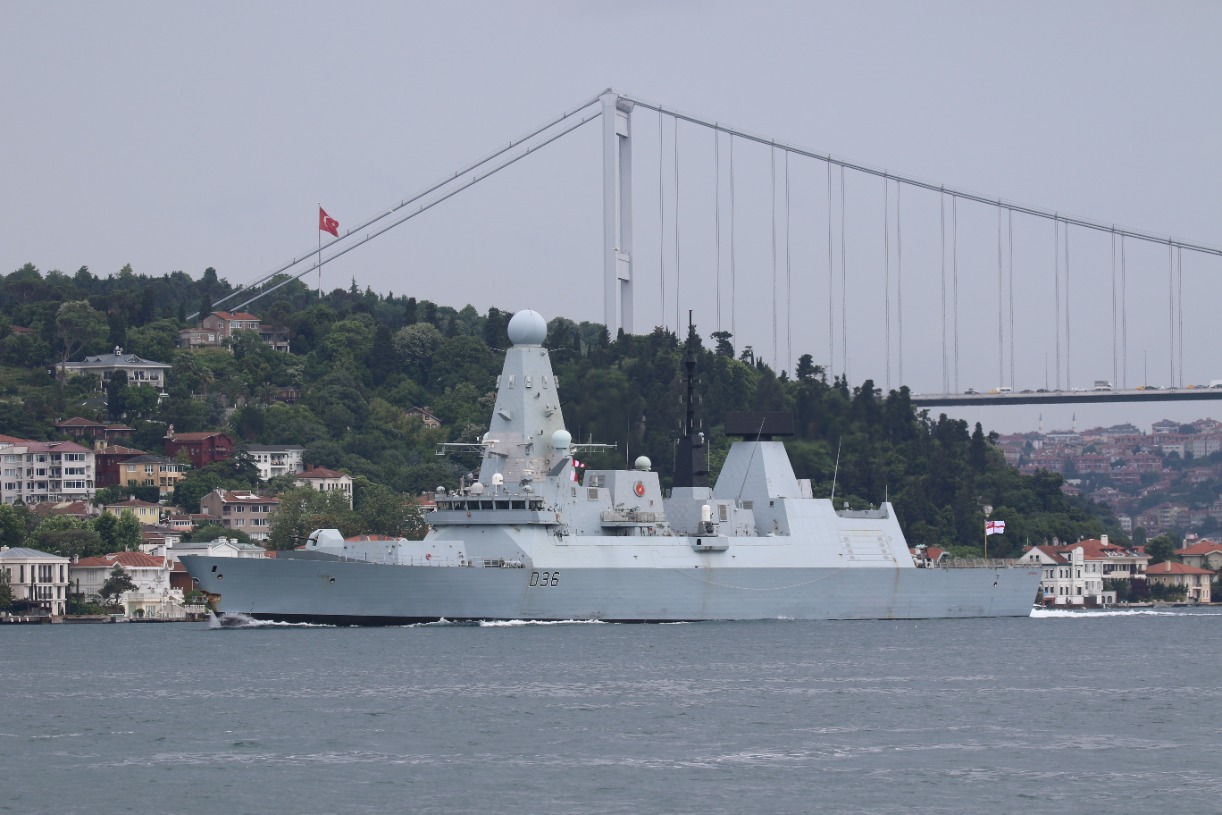 Russian President Vladimir Putin said in a subsequent TV appearance that Russia’s military could have sunk the Defender without triggering a large-scale war because, in his words, the west knows it cannot win such a conflict. Putin’s confidence may...

How long has it been in the works?

March 2017 – NATO and Russia in the Black Sea: A New Confrontation? 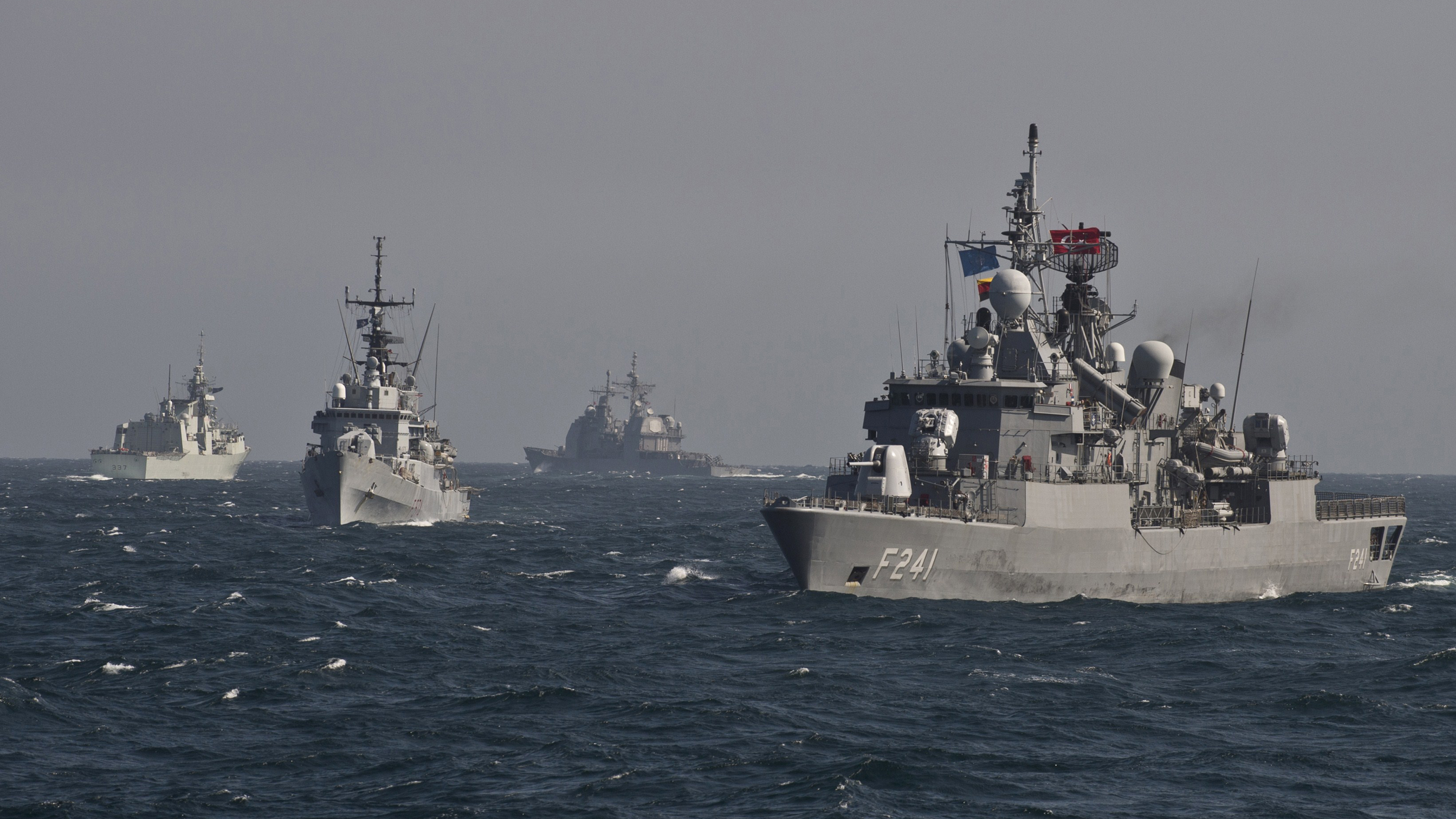 NATO and Russia in the Black Sea: A New Confrontation?

This commentary is the second in a series of essays on the geostrategic importance of the Black Sea. Read the first essay here and the third essay here. With the recent completion of the NATO Sea Shield exercise and NATO defense ministers’ approval... 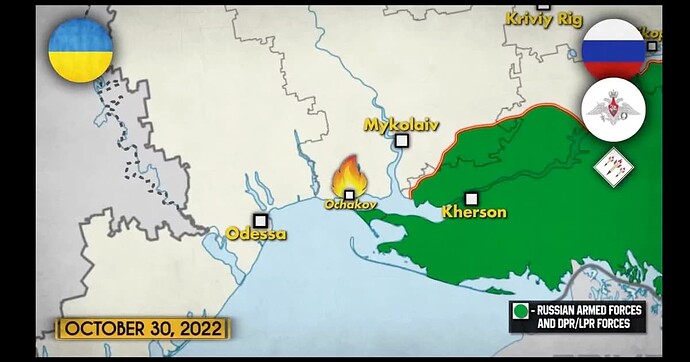 On October 30, the Ukrainian training center in Ochakov, where the Black Sea Fleet attack in Sevastopol was coordinated from, was hit by Russian missiles. Ukraine plunging into darkness. 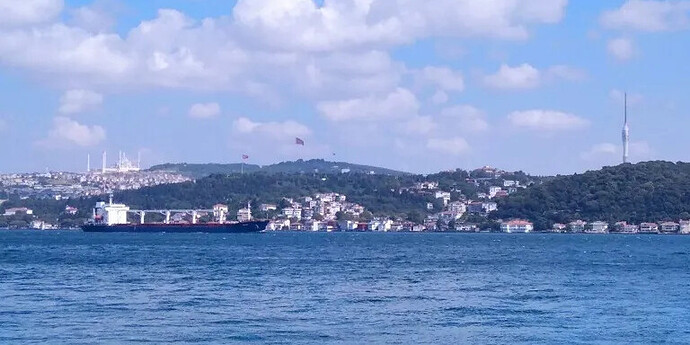 image768×385 80.1 KB
“In view of the terrorist attack, carried out by the Kiev regime on October 29 – with the participation of British specialists – against ships of the Black Sea Fleet and civilian vessels involved in ensuring the security of the grain corridor, the Russian side suspends participation in the implementation of agreements on the export of agricultural products from Ukrainian ports,” an official statement read.

The decision was made due to attacks on ships on civilian vessels and on the Black Sea Fleet in Sevastopol, the Defense Ministry said. Moscow has halted its compliance with a grain deal, brokered by the UN and Türkiye, after Kiev launched a major drone attack on ships involved in securing safe passage for agricultural cargo, the Russian Defense Ministry announced on Saturday.

In a post on its Telegram channel, the ministry said Russia “is suspending its participation in the implementation of agreements on the export of agricultural products from Ukrainian ports”.

The ministry also said that the bombing was organized with the involvement of British military RT reports.

Earlier, the Russian MFA reiterated that the geography of cargo recipients does not correspond at all with the initially stated humanitarian goals. “Half of all deliveries went to the European Union and such developed countries as the UK, Israel and South Korea, while the needy countries, particularly, Somalia, Ethiopia, Yemen, Sudan and Afghanistan, received only 3% of food products, mainly via the UN World Food Programme (WFP). Due to this, the UN leadership even re-categorized this humanitarian initiative as a commercial one, stressing the importance of stabilizing global food prices,” the statement noted.

Over the past days, Kiev forces have carried out several terror attacks against Crimea and against Russian ships in the Black Sea.

The Russian foreign ministry also noted that the deal has been “suspended indefinitely”, since Moscow can’t guarantee the safety of the civilian vessels amid Ukrainian attacks.

“Given the actions of the Ukrainian armed forces (which are designated as a terrorist attack), led by the UK specialists, and staged against Russian vessels ensuring the operation of the humanitarian corridor, the Russian side can no longer guarantee the safety of civilian carriers involved in the Black Sea Grain Initiative, and suspends its implementation from today for an indefinite period,” the ministry said in a statement.

The ministry added that the relevant instructions have been issued for the Russian representatives at the Joint Coordination Center in Istanbul, which controls the transportation of Ukrainian grains.

Meanwhile, a source in the UN noted that Russia plans to request a Security Council meeting regarding the issue.

Earlier in the day, the MoD said that the preparation of the morning drone attack on Sevastopol was carried out under the guidance of UK specialists in the city of Ochakov. According to the ministry, the attack involved 16 air and sea drones and slightly damaged the Russian naval minesweeper of the Black Sea Fleet.

Russian authorities had previously criticized the deal – while the accord was supposed to prevent food scarcity among the most vulnerable countries, a large amount of it ended up in Europe instead of Asia and Africa.

The agreement was struck on July 22 by Russia, Ukraine, and Turkey in order to provide a humanitarian maritime corridor for ships with food and fertilizer exports from Ukrainian ports — Odessa, Chernomorsk, and Yuzhnoe. 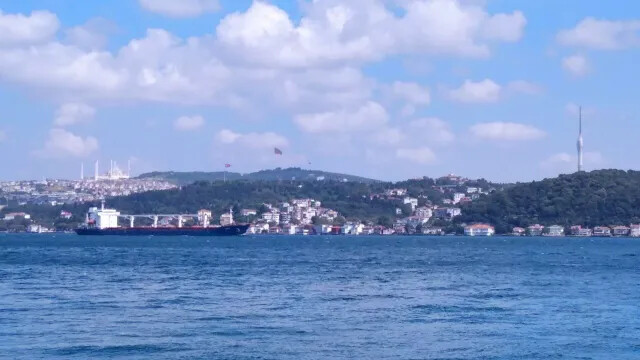 The first commercial vessel that left Ukraine under the Black Sea grain deal was inspected in Istanbul on Wednesday and cleared to proceed to Lebanon, the Joint Coordination Center (JCC) said © Sputnik / Maksim Durnev 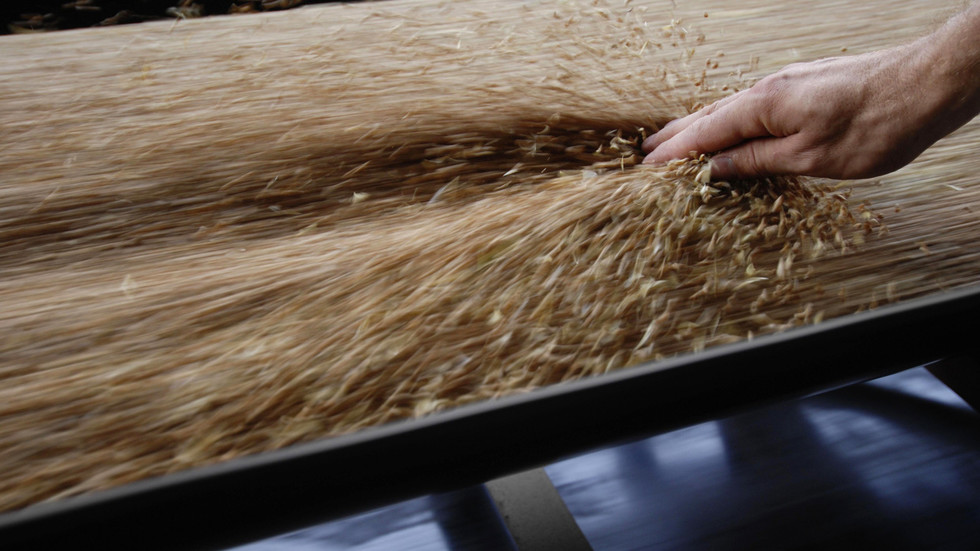 The British Ambassador left the Russian Foreign Ministry without comment.She was called because of the British participation in the preparation of Kiev's attacks on Sevastopol...Further Info:Russia To Present 'Evidence' UK Special Forces Behind... 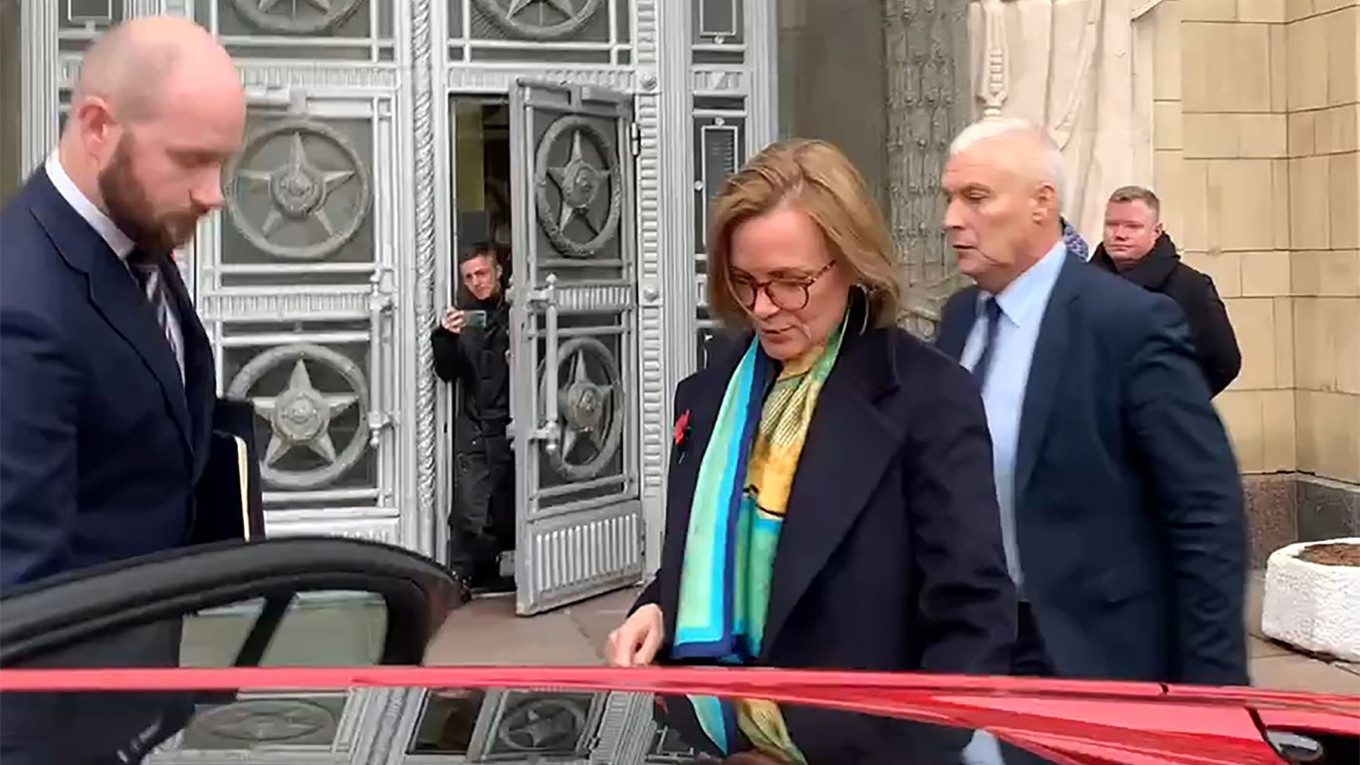 Russia summoned the UK ambassador to Moscow to the Foreign Ministry on Thursday and warned London of "dangerous consequences" after accusing it of helping Kyiv carry out an attack on Moscow's Black Sea fleet in Crimea last week.

"Such confrontational actions of the English carry a threat of escalation of the situation and could lead to unpredictable and dangerous consequences," the Foreign Ministry said in a statement.

Moscow said it had delivered a "strong protest" to U.K. ambassador Deborah Bronnert.

It claimed British forces were training Ukrainian special services, including for "sabotage operations at sea."

On Saturday, Russia accused the U.K. of helping Kyiv orchestrate a drone attack on its ships in the port of Sevastopol in Moscow-annexed Crimea.

The Foreign Ministry said it had handed "concrete facts" of London's "hostile provocations" to her.

"A demand was put forward to stop them immediately," it said, adding that U.K. military specialists were training Ukrainian special forces in the southern city of Ochakiv, "including training for underwater saboteurs for operations in the waters of the Black and Azov seas."

Russia last week also accused the U.K. of being implicated in explosions on the Nord Stream pipelines in September.

The U.K. says these are "false claims on an epic scale."

Relations between London and Moscow have been deteriorating for years. Russia considers the U.K., one of Ukraine’s strongest backers, to be one of the least friendly Western countries to its interests. 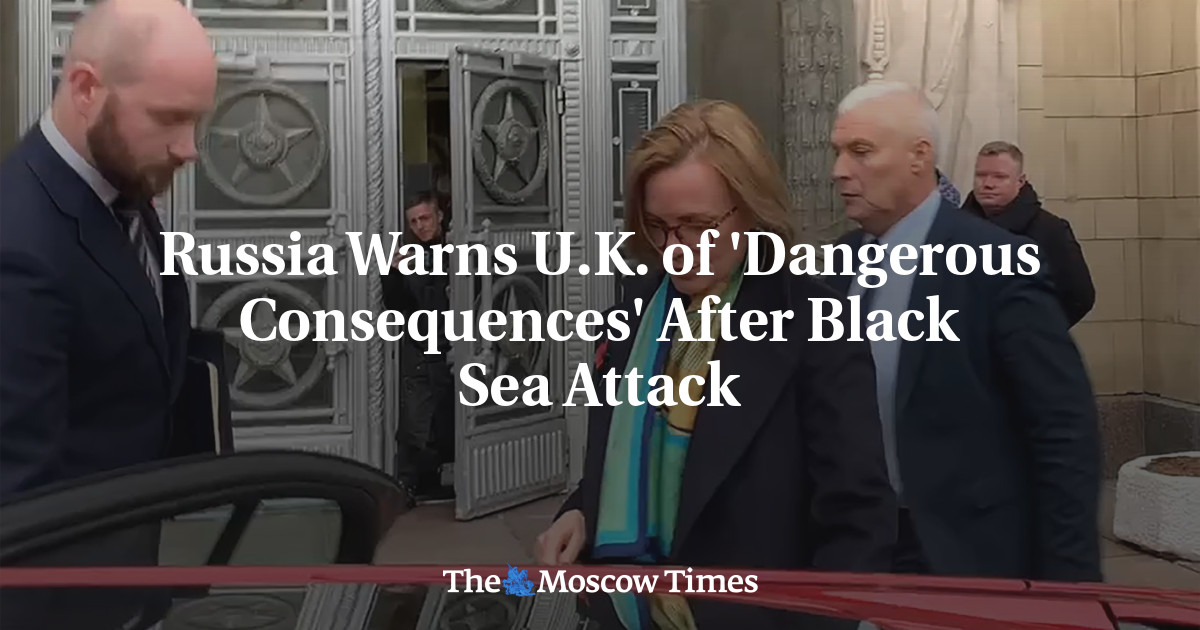 Russia summoned the UK ambassador to Moscow to the Foreign Ministry on Thursday and warned London of "dangerous consequences" after accusing it of helping Kyiv carry out an attack on Moscow's Black Sea fleet in Crimea last week.  "Such... 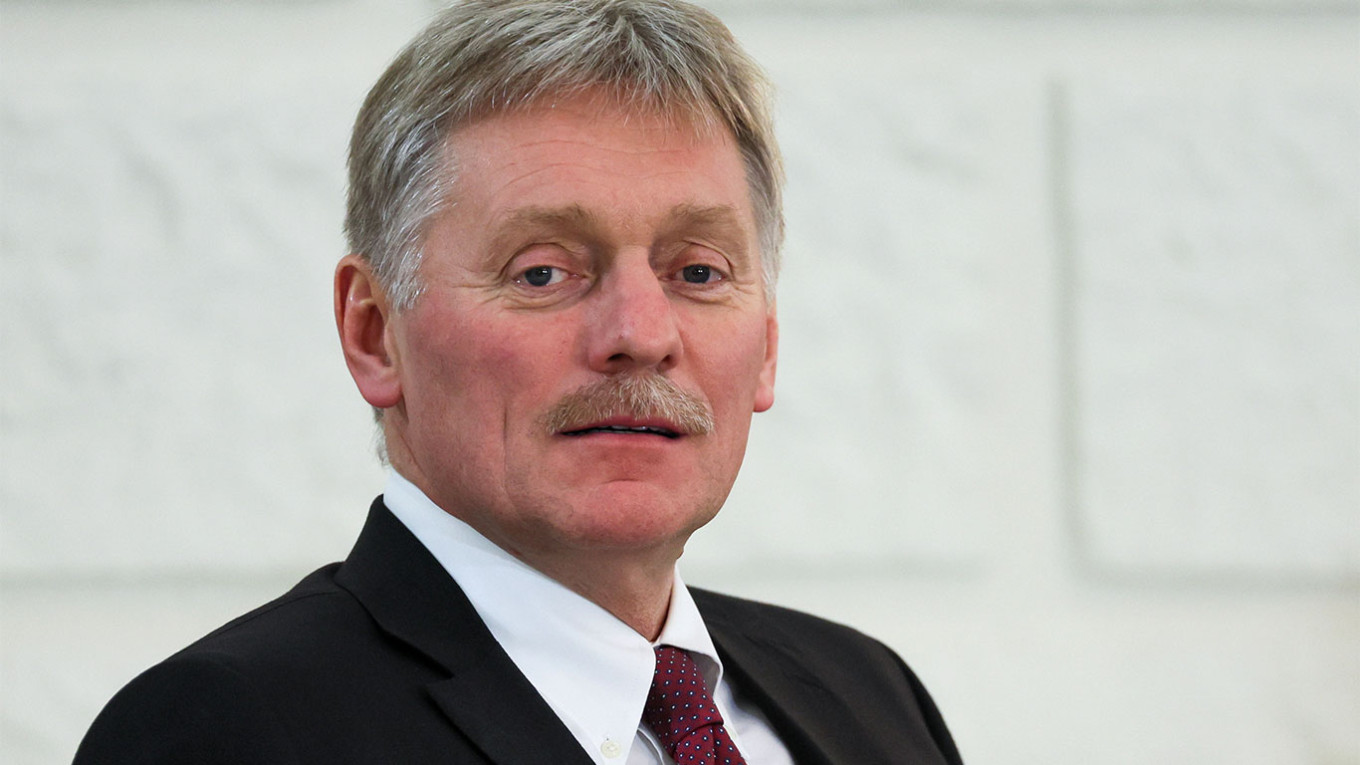 The Kremlin on Tuesday accused Britain of "directing and coordinating" explosions on the Nord Stream gas pipelines.

"There is evidence that Britain is involved in sabotage, in a terrorist attack on vital energy infrastructure, not Russian, but international."

He did not provide any details but insisted that the West should "carefully" analyze Moscow's information.

"We expect that despite the unacceptable silence of the European countries, this analysis will nevertheless be carried out," he said, adding that Russia would also consider further steps.

London has rejected the accusations.

Explainer: What We Know About the Russia-Europe Nord Stream Pipeline Leak

Read more ](Explainer: What We Know About the Russia-Europe Nord Stream Pipeline Leak - The Moscow Times)

British Prime Minister Rishi Sunak's spokesman said on Tuesday London would not be drawn into "distractions which are part of the Russian playbook."

On Monday, Foreign Secretary James Cleverly told parliament that Russian allegations against the U.K. were "increasingly detached from reality."

"They are designed to distract the Russian people from the reality of Russian failures on the battlefield," he told members of parliament.

Explosions in late September sent natural gas bubbling up from the pipelines on the floor of the Baltic Sea to the surface in a major environmental disaster that further ratcheted up geopolitical tensions over energy supplies.

Moscow has accused Western countries of being behind the explosions of the pipelines, built to carry Russian gas to Germany, but has not provided any firm proof.

Ukraine and some Western countries have called the attacks sabotage and pointed the finger at Russia. 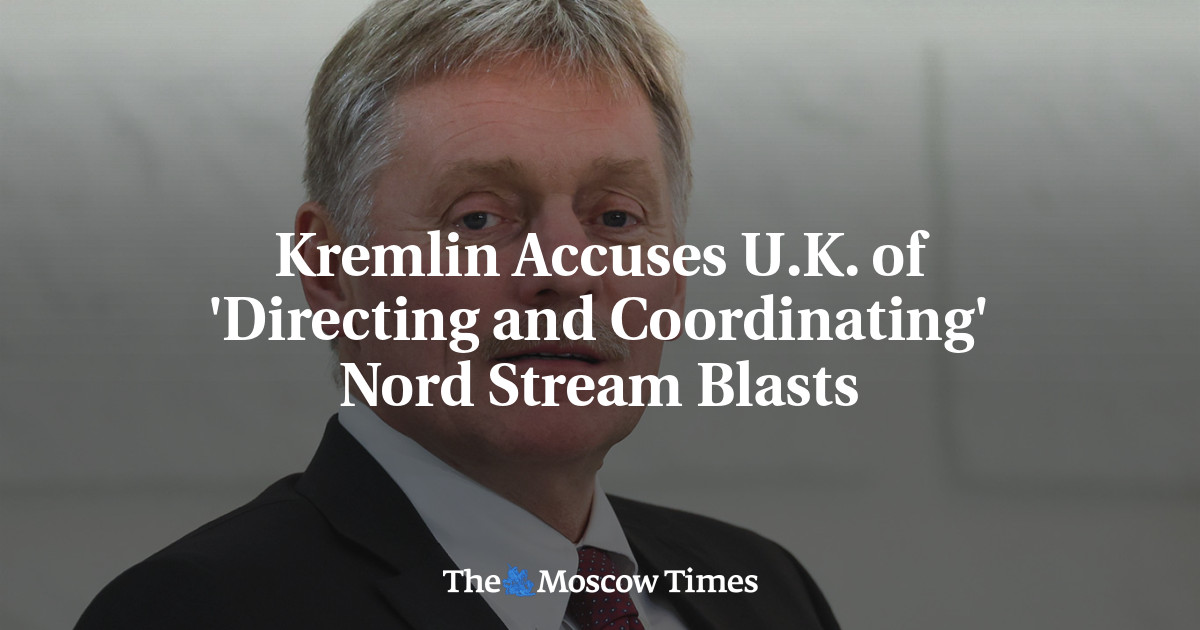 The Kremlin on Tuesday accused Britain of "directing and coordinating" explosions on the Nord Stream gas pipelines. 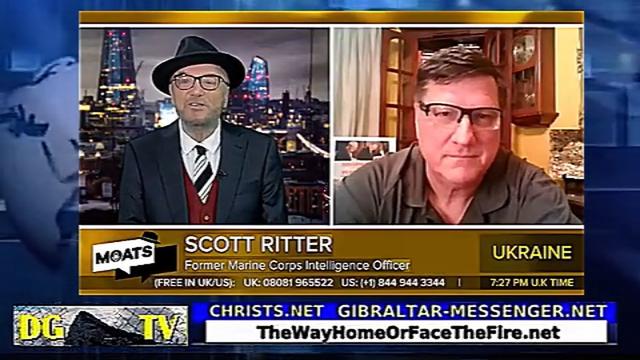 Bullet Points Scott Ritter - The British Did It

Bullet Points Scott Ritter - The British Did It 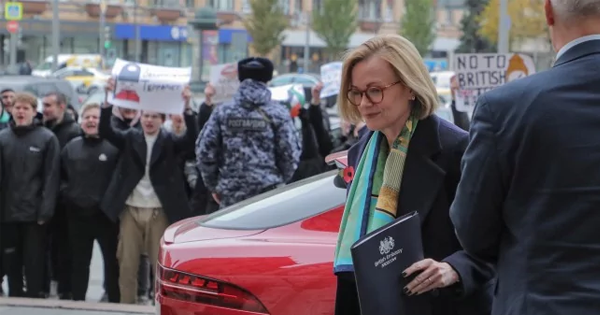