Dark Winter is actually a die-off plan to exterminate humanity, and the vectors of attack against human beings include mass vaccination genocide, engineered food supply collapse leading to mass starvation 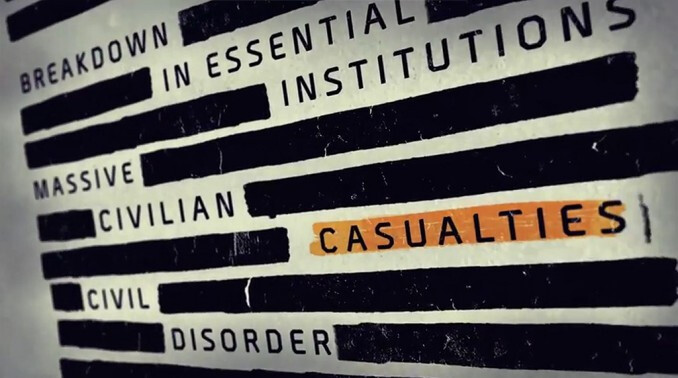 Dark Winter is actually a die-off plan to exterminate humanity, and the...

The so-called Dark Winter is actually a die-off plan to exterminate humanity, and the vectors of attack against human beings include mass vaccination genocide, engineered food supply collapse (lead…

We are also watching in horror as this accelerating collapse bleeds into shipping and delivery companies (like Fedex) who are just about on the brink of suspending major services due to a lack of competent workers.

Meanwhile, 70+ container ships are stacked up outside the Los Angeles port, as criminal governors like Newsom deliberately worsen the supply line restrictions by enforcing senseless covid lockdowns that deprive the ports of desperately needed workers.

The traitors in charge are squeezing off all the chokepoints of infrastructure that keep human beings alive.

If they succeed, they will quickly plunge America (and other nations) into third world conditions of mass famine, destitution, homelessness, violence and despair. And have you noticed how quickly this is all materializing?

The #1 Killer In Any Crisis Is Disease And Infection.

And it doesn’t matter if it’s an earthquake, terrorist attack or the collapse of the dollar. One of the first things to kill most people in a crisis is an illness or disease…

This is all by design, and it’s accelerating by the day.

What Was The Holodomor? Americans Could Soon Find Out Firsthand...

The entire world is facing a Holdomor

From 1932-1933, a mass genocide took place in Ukraine. Millions of people, including children, were deliberately starved to death by the USSR during the Holodomor event. A state-organized famine was deployed when the Ukrainian people continued to thrive and keep their cultural identity separate from the USSR, despite being controlled by Communist forces.

Joseph Stalin tried first to erase their culture by the ruthless elimination of anyone and anything he perceived as a threat to his power. For Stalin, the independent-minded farmers and cultural freedoms in Ukraine constituted such threats.

Then massive reorganization of privately owned farms into collective (state-owned) farms and imposed high crop requisition quotas. It was the sale of grain that was to pay for industrialization. Independent farmers were forced to give up to the state their private land, livestock and equipment, without compensation. They simply became workers of the collective farm, who would be paid only if the collective farm handed over to the state the quota in crops set by Moscow.

The state-controlled media demonized the wealthiest of the farmers, their families, and the community leaders. They were “othered” to the point that it was of little surprise when they were either executed by firing squad or deported to a Siberian concentration camp.

The USSR followed up by stringently enforcing the collectivization of Ukrainian agriculture. They demanded exorbitant amounts of wheat – more than the people could produce. When farmers did not meet their quotas, brutal punishments were meted out. The government searched every home for anything that might be edible, and that food was taken by force by Communist brigades

The grain taken from the farmers was sold to other countries or left to rot while Ukrainians died of starvation. What Was the Holodomor? Americans Could Soon Find Out Firsthand

Do you think the idea of an American Holodomor is far-fetched? Or do you think we can learn from history that it’s entirely possible?