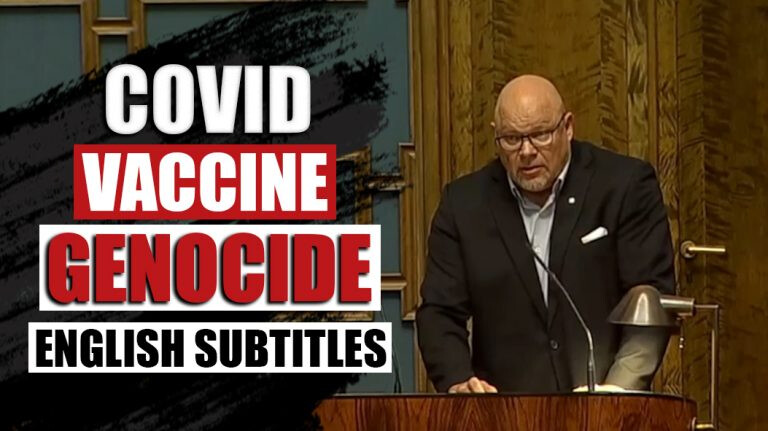 Toxic means they are poisonous.

On June 9, Ano Turtiainen, member of Parliament of Finland, warned about possible COVID vaccine genocide going on in Finland. He warned all members of the Finnish Parliament they may be guilty of several different crimes, the most serious of these may be even genocide.

“In violation of the Nuremberg Code, Finns have not been told that this is a human experiment….So, now I ask you all: how many more people should die or get injured before we interrupt this killing of people?”

Video and Transcript are available here.

We all know that something big is coming. We know that there is a second kill shot in the works.Many think it is Ebola and it will come out of China.This brief article will take a quick look at this notion.

An advertisement for crisis actors, faking a pandemic was taken out for a Medical Center at the Gold Coast. Why? Isn't covid subsiding? Is this a second "scamdemic?" Another curious event took place in Mohave County, AZ. Governor Ducey sent $40 million in pandemic mitigation aid to the county. Again, we have to ask why since Arizona has lifted all of its restrictions and everything is back to full capacity.

Back to crisis acting, the powers that be wouldn't need crisis actors if a new crisis was noton the way. The promotion of fear for Killshot #2 is underway. This is how they get people
to line up and take the vaccines. The have to greatly exaggerate the scope of the pandemic. Emergency
Room are made to look like they are filled to capacity. CNN and the lap dog media covers the event as the latest and greatest threat. The fake role playing is what everyone will see on television.

Look at the accompanying link. If this was the real Covid, the cameraman would be social
distancing and of course he would be wearing a facemask.

Some will look at the event's dates and say this was about covid. Look again, when this happened, covid was already underway andlockdowns initiated. Not to worry, When the event has exhausted the coverage, the crisis actors receive their $18 per hour payment and the hospital in questions returns to normal.

What is coming? How bad will it get? There may be an answer to that question with regard to the nature and severity of what lies ahead.

An Insider Reveals Frightening Details About What Is Coming

Three days ago, I received the following email from a person with an extensive medical background who was recently connected to two researcher who both committed "suicide".

I received a letter from self-identified person with a medical background that relayed some very interesting and concerning material:

A few days later I called the mystery medical professional, who we will refer to as M&M. I anticipated the conversation would focus on cloning and the potential closing of human beings. That ended up not being the case. M&M revealed to me that the late Dr. Woods discovered that most horses do not contract internal organ cancer. He believed the effect had to do with the chemical composition of the horse. When he was suicided, hewas working on the notion that this could lead to treatments for human cancer and before you knew it, Dr. Woods was dead.

Our subsequent discussion went down another path. Based on a number of factors to be revealed at a later date, M&M told me that a second kill shot is indeed underway. M&M believes it is in the spike protein that will lead to a latency effect and mutate into an attack on the respiratory system. Eventually, this attack, will look like Ebola as the person bleed out of every cavity in their body. M&M believes that the responsible agent is anthrax and it has been weaponized to mimic Ebola in delayed response in the vaccine.

This medical professional was in a serious car accident. The mystery driver's insurance company sent her to a neurologist who she claims hypnotized her, presumably to see what she knew about this plot. As it turned out, she claims the neurologist and family is connected to a defense contractor that can find anyone and "hear any conversation, anywhere" as that was contained in their prospectus. I am withholding the name of the company which we plan to reveal when I interview this person in the near future.

I have a second person with a very similar story that approached me in January of 2020. I didnot believe the story until now.

This person told me that weaponized anthrax would be the weapon of choice and that nobody should take the vaccine.

This person is afraid for their life and they were a federal health employee, who had access to the inforation that led this doctor to this conclusion. KILLSHOT #2 IS IN THE VACCINE AND THE EFFECT IS LATENT. THE DEATH WILL LOOK LIKE EBOLA AND THAT WILL CAUSE PEOPLE TO PANIC AND WILL EASY FOR THE BIDEN ADMINISTRATION TO MANAGE..

Look at the accompanying link. If this was the real Covid, the cameraman would be social
distancing and of course he would be wearing a facemask.

Some will look at the event's dates and say this was about covid. Look again, when this happened, covid was already underway andlockdowns initiated. Not to worry, When the event has exhausted the coverage, the crisis actors receive their $18 per hour payment and the hospital in questions returns to normal.

This exclusive podcast goes in to detail about what's to come, "The KILL SWITCH"

PM Derek Sloan arranged the press conference, and invited Dr. Bryan Bridle, Dr. Patrick Phillips, and Dr. Donald Welsh to give short presentations on how good doctors and scientists are being censored in Canada, and being harassed and threatened for speaking the truth, which is not getting out to the masses.
They have put their careers and lives on the line to speak the truth about the genocide currently being carried out and the crimes against humanity over the COVID-19 response and bioweapon shots.

One of our many dear Canadian subscribers emailed me a link to a press conference given in Ontario yesterday at Parliament Hill. PM Derek Sloan arranged the press conference, and invited Dr. Bryan Bridle, Dr. Patrick Phillips, and Dr. Donald Welsh to...