Coronavirus #202 PROOF the MSM is lying

Media has long been accomplices in "the grand illusion".

From the BBC announcing Building 7 had collapsed 20 minutes prior to it doing so (scripted), to the media families' role in 9/11 as presented in "September Clues".

Mainstream Media's business is entertainment, and making a pack of lies seem realistic. Doesn't 6 companies own them all, including box-office companies? 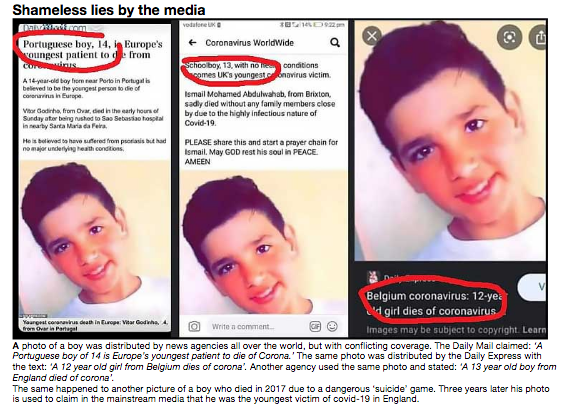 This image taken from the above linked PDF is a reminder of other television drama – like how did Noah Pozner, a so-called victim of the Sandy Hook Hoax, end up among the victims in Pakistan?

Photo of child killed at Sandy Hook shows up at Pakistani school shooting...

Sandy Hook is a rabbit hole, but is was a made for television crisis drill.

The Boston Bombing also had it's share of theatrics.

Nearly everything we are told about our history is a lie. The Cabal\Governments have lied to us about our human origins, 9/11,Global Warming, the existence of a afterlife, World Wars, the War on Terror, UFO;s and the cure for Cancer and nearly...

We are supposed to believe Jeff Bauman lost his right leg and the lower part of his left leg in the Boston Marathon explosion but he is Lt. Nick Vogt who lost his legs in Afghanistan.

The Scamdemic is just another deception.

But we were warned Satan and his crew would deceive the whole world (Rev. 12:9).

It's been going on for decades.

A message from the past: