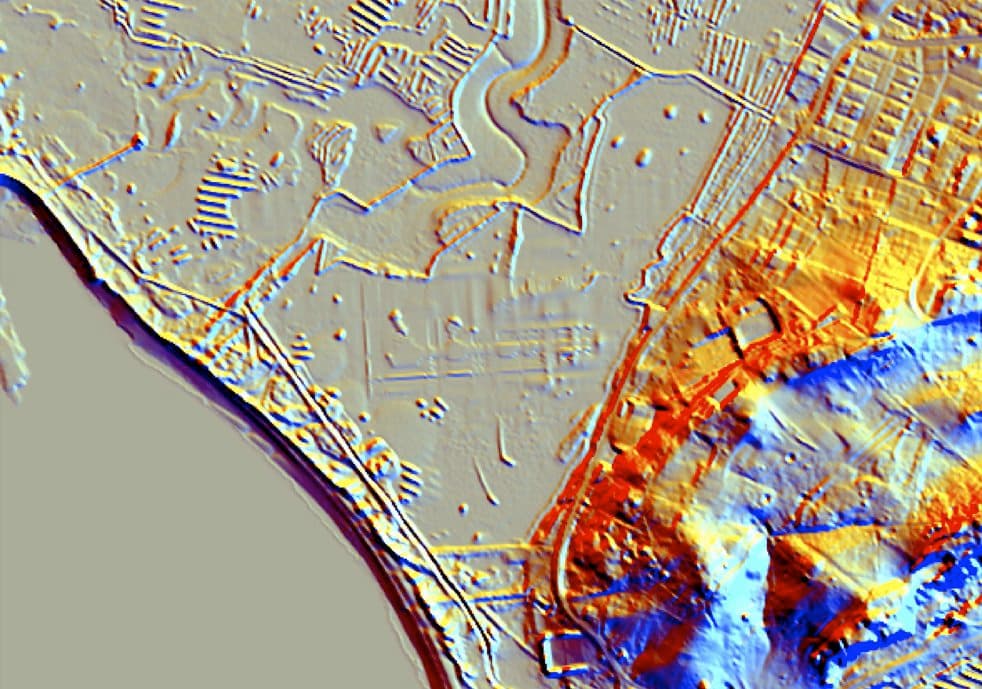 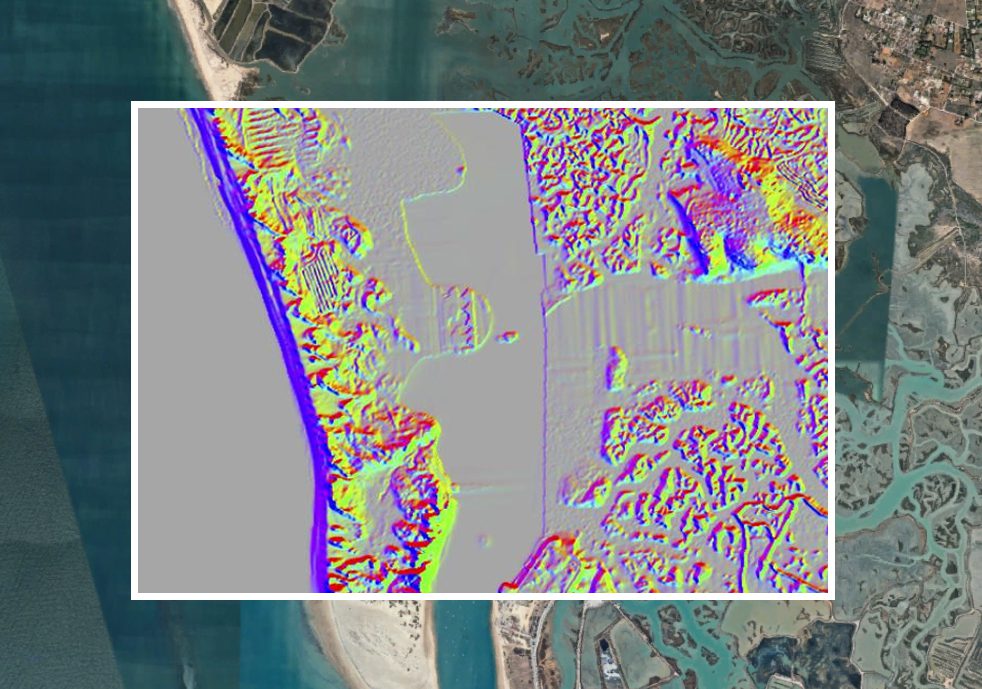 Archaeologists from the University of Seville have discovered a series of submerged ruins that could correspond with the Phoenician-Punic temple of Melqart and Hercules Gaditanus. - HeritageDaily - Archaeology News

Archaeologists from the University of Seville have discovered a series of submerged ruins that could correspond with the Phoenician-Punic temple of Melqart and Hercules Gaditanus.

According to contemporary text, a temple to Melqart (chief deity of Tyre and of two of its colonies) was situated near the ancient city of Gadir (present-day Cadiz).

The Romans adapted the temple in dedication to Hercules Gaditanus, emerging as one of the most important sanctuaries in the western provinces through antiquity.

The earliest refence of the sanctuary comes from the writings of the Greek historian Polybius (200 BC to 118 BC), but would later be mentioned by the stoic philosopher Posidonius (135 BC to 51 BC) and from a visit by the Neopythagorean philosopher Apollonios of Tyana (around 3 BC to AD 97).

Researchers from the University of Seville, working in collaboration with the Andalusian Institute of Historical Heritage conducted a LiDAR survey in an area between the Spanish coastal towns of Camposoto and Sancti Petri.

The survey area consists of a semi-submerged landscape, dominated by a series of marshes and the Caño de Sancti Petri. The study revealed a new coastal landscape with the presence of possible breakwaters, moorings, an inland port, and the discovery of several large, monumental buildings.

By combining data from previous discoveries in the region, the team drew a line that delimited an area between the slopes of the islet that separates the channel from the Atlantic.

There they found a rectangular submerged structure that measures 300 metres by 150 metres and may have a correlation with the information that ancient authors provided, however, this new discovery still contends against other proposed theories for the location of the temple.

Archaeologists plan to conduct detailed archaeological surveys of the area (terrestrial and underwater) to determine the chronology and function of each of the detected structures and reconstruct the history of the area.

Or perhaps they are Israelite ruins, specifically the Gadites (Cadiz - Gadiz - Gadir - Gadites)

"Most of us know that the city of CÁDIZ was founded by Phoenicians, around 1500 – 1000 B.C. and that it was called GÁDIR (or “GAD’s city”). Later further Phoenician immigrants arrived in 722 B.C. after the Assyrian conquest of the ten-tribed kingdom of Israel. Phoenicia wasn’t a country but a region which included Israel. Later on in roman times we know that GÁDIR was called GADES. This is why the people from Cádiz are known today as “GADitanos”, or “Gadites” in English. But why Gad? It’s because these Phoenician Israelites who established themselves all along the Costa de la Luz (the Coast of Light), Gibraltar and the Camp of Gibraltar belonged to the Phoenician/British/Israelite tribe of GAD. Some names last down the centuries... seven coats of arms/ensigns of these Campogibraltarian localities represent signs of common identity between these municipalities and their unequivocal historical relationship with Gibraltar, the seed from which these towns sprang up. All share the Camp/Castle of GAD, in many cases “detached”, the “Key to heaven and Hell” and the crown, the Crown of Christ, the King of Gibraltar; the Camp of Gibraltar and the WHOLE WORLD." – The Camp of Gibraltar and the Rock of Gibraltar; Origins, Today and their Bright Future 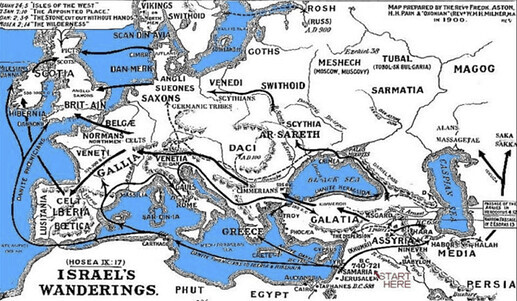 Why isn't it called the Spanish Peninsula?

The word Iberia is a corruption of the word "Eber"ia / Heberia which means "Hebrew's Land ". Eber (from whom the word Hebrew derives) was the grand-sire of the Hebrew Abraham (who was NOT Jewish - Jewdah was not born yet - he was the great-grandson of Abraham) who in turn was the grand-dad of "Jacob/Israel" who sired the "12 Tribes of Israel", by his 12 sons:- 1. Reuben; 2. Simeon; 3. Levi; 4. Judah [Jew-dah]; 5. Zebulun; 6. Issachar; 7. Dan; 8. GAD ; 9. Asher; 10. Naphtali; 11. Joseph; 12. Benjamin (ALL 12 sons were Hebrews - NOT Jews - 1 Chronicles 1 v 24-28). Levi were the priests and were divided amongst the other tribes. Joseph/Manasseh took their place in battle and so substituted their own standard. Gibraltar: British or Spanish?

The tribes that headed to the isles a far off also knew of the Iberian Peninsula significance, including the Pillars of Hercules -

"We know Most Holy Father and Lord (blasphemy - Matthew 23:9), and from the chronicles and books of the ancients gather, that among other illustrious nations, our's, to wit, the nation of the Scots, has been distinguished by many honours; which passing from the greater Sythia through the Mediterranean Sea and Pillars of Hercules (Gibraltar) and sojourning in Spain (Iberia - Heberia - the Hebrew's land) among most savage tribes through a long course of time, could nowhere be subjugated by any people however barbarous; and coming thence one thousand two hundred years after the outgoing of the People of Israel (the Exodus), they by many victories and infinite toil, acquired for themselves the possessions in the West which they now hold........In their kingdom one hundred and thirteen kings of their own royal stock, no stranger intervening, have reigned...." (Deuteronomy 17:14-20). For so long as a hundred of us are left alive we will yield in no least way to English domination. We fight not for glory, nor for wealth nor honour, but only and alone for freedom, which no man surrenders but with his life." (Praiseworthy - Matthew 10:28)

Book of Teia Tephi 2:4 – Therein a space was our rest
Till Baruch the scribe found tidings out of the Isles of the West
That the ways unto Tarshish were open, the ships of Javan afar,
And vessels of Tyre went forth on the left of the merchant's star,
From the tongue of the sea to Melcarth's porch (Gibraltar) of the setting sun,
Whence Northward and West they sailed till the Island of Towers was won,
On its righthand Breogan and Eber (Iberia), on its left that water whose bound
Is the Promise of God, wherein His purpose shall yet be found (Gen. 48:19).

Who was Teia Tephi? – THE STORY (in brief) of Tephi, queen of Tara and Gibraltar.

Very Important Messages for the People of the Campo de Gibraltar